Angie Sammons enjoys this middle ground Mexican as much as ever

EL Macho was the first Mexican restaurant we visited in Liverpool. It was memorable mostly for its cathedral-ringed location - Hope Street - and for a level of caution that bordered on the anglican when it came to the use of spices.

This was the late 1980s when chilli choices were few and far between in the city. Nevertheless, that famous vegetarian Paul McCartney had, allegedly, given El Macho the characteristic thumbs up when he visited and, by the pictures on its walls, the Beatle was not the only gringo star to have endorsed its forgettable charms.

El Macho served its last refried bean in 2010, probably never imagining that Mexican cuisine would be repackaged to enjoy a new day in the sun just a few years down the line.

This is a widespread heat wave, and here it is best observed in Ropewalks, Smithdown Road and other places where people congregate over an artisanal ale. Now they are commonly called burrito “shacks” which lends them that current street-food vibe, and crucial to the model is a big up-sell on cocktails.

In Liverpool One, there are big, shiny, anonymous versions like Wahaca, and back on Bold Street, where the only way is indie, the recent arrival of a Taco Bell provoked wailing and an anxious stroking of beards.

Taking the middle ground in all this is La Parrilla, one of South Road Waterloo’s most reliable eating out spots which opened just as El Macho closed.

There are no celebrity endorsements, but for what it’s worth I reviewed the place on a snowy night in 2011 and loved it for its cheerful exuberance and Mexican chefs. I still send people there all the time (whether they like it or not).

Late last year La Parrilla made its own bold move to Bold Street. But could it keep up with all the other Mexican-but-not-Mexican establishments? In fact it leads the way and with its mariachi music and easy, rustic, cantina style atmosphere the city centre is richer for it.

La Parrilla’s menu is mindful of those people who wouldn’t go near a chilli if you paid them (garlic bread and a well done sirloin for you, Sir?) with a wide variety of burritos, tacos and fajitas for the rest. NB: if you are among the some who like it hot, you need to tell them to ramp up the heat when you order. So we do.

Everything here is daisy fresh, such as the chunky, wobbly, skewered king prawns (£6.95) which have been marinated in fresh chillis, lime and garlic before making their way to the table on a salad as bright as the decor.

Taquitos (£5.95) are deep fried - but bone-dry - flour tortillas that encase colourful peppers, onions and melted cheese. On the side, some expertly executed salsa and a sharp barbecue sauce. All satisfying, all soothing.

Let’s not pretend that there is anything madly Mexican going on here. Try walking into a restaurant in downtown Xalapa and asking for some chilli con carne and they will point to the nearest Delia Smith publication.

Yet “a real taste of Mexico!” Is how La Parrilla bills its own version, namely “Authentic Chilli” (£11.95).

Whatever its origins, a decent bowl of chilli - and not just a spag bol on steroids - has a firm place in my loyalties and this, served in its own edible tortilla bowl over rice and beans and topped with cheese, soured cream and lashings of lovely leaves and salsa, is an enjoyable specimen to devour.

Service from the young staff is seamless and friendly and we stay way longer than most as the world passes our window.

But should you get bored, there is a swing under a fake maple tree. Colourful sombreros sit stacked on barrels for decoration and for the use of customers, such as the happy, beer-swilling couple at the next table who asked us to take cute pictures of them before breaking into the sort of stand-up altercation that would put Burton and Taylor to shame. The cause: he had allowed the table to be cleared while she was visiting the bathroom.

“But I haven’t finished my dinner, you dozy f***ing knobhead,” she informed him upon her return and deftly slapped his hat to the ground before flouncing out and into the night.

I told you the food was good. 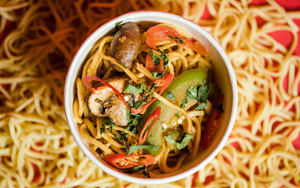 Four brand-new dishes for a limited time only