‘Does not live up to the Eastern promise’ – Koukash, Sir Thomas Street, reviewed

Vicky Andrews is underwhelmed by underwarm, underdone food at the Hilton DoubleTree

APART from a full English breakfast at the Premier Inn, there’s only one hotel restaurant that I’d always go back to with real excitement. Marco Pierre White’s at Hotel Indigo is outstanding and proof that a boutique four-star can be matched with a standalone restaurant that boasts an excellent eating experience. It can be done and done very well.

My first problem with Koukash at DoubleTree is that I don’t think it knows what it wants to be. It sits within the Hilton’s bar and in order to find the dining area from the street you go down a flight of stairs, past the spa entrance and beyond the half-empty bar stools and booths. If I hadn’t been reviewing the place, I probably would have faked a phone call and walked straight back out.

Claire and Marc Lara’s new Mediterranean menu was launched in October with much anticipation. Claire was the first female winner of MasterChef: The Professionals, in 2010, and has since worked at Liverpool’s Panoramic and London Carriage Works, while Marc’s CV includes being French and former head chef at Delifonseca, so the cooking couple must know a thing or two about good food.

There’s a strong Middle Eastern influence here (fattoush, kibbeh, baba ghanoush and lots of tahini) next to big plates of seafood linguine, fish and chips, and baharat steaks. You can also get afternoon tea, bottomless brunch and a Sunday roast. Mediterranean vibes don’t stretch to the interior. We settled on a grand window table surrounded by wood-panelled walls, long red drapes, and black and white photos of old Liverpool. Vines hung from the ceiling but first impressions were more of the Adelphi than the House of Apollo.

A pianist tinkled through a melancholy rendition of Seven Nation Army while we eyed up the small plate deals: three for £18, five for £28 and seven for £37. We picked our lucky seven and warmed up the whispering atmosphere with a couple of Mojitos (£12 two for one on Fiesta Fridays) and a bottle of the Morandé One to One Sauvignon Blanc, a well-priced fruity Chilean from the Casablanca Valley (£22).

An hour after our arrival, knives and forks were still untouched. The group on the next table had a loud word with management about waiting time. Their lamb tagine eventually landed among our order. We looked under the lid, had a sniff of the flatbread and took a few photos before it was snatched away by the waiter to its rightful owner. Tagine lady leaned over: “Sorry to take that off you but I’ve been waiting an hour for it and my friends have already finished their meal.” How very British.

On paper it had all sounded spectacular but none of our small plates lived up to the Eastern promise. Roasted spiced cauliflower with toasted almonds and coriander yoghurt (£5.95) was adequate but uninspiring and not a patch on the legendary Maray version, which comes smothered in lashings of tahini. Stuffed vine leaves (£6.25) revealed some vibrant flavours and the pine nuts and rice inside were delicious, but the tomato sauce on top was anything but aromatic and looked dried out and exhausted.

Fried chilli squid (£7.50) came in all of its tentacled glory, surrounding a bright orange puree that was pitched as ‘red peppers and smoked garlic’ on the menu. It tasted and looked very very similar to the roasted red pepper aioli that accompanied the fried whole king prawns (£8.25). Both fish dishes were perfectly palatable but I expected much more from the dips than a doppelganger for M&S seafood sauce.

Baked octopus in a Catalan bean stew (£7.50) was more like a bowl of overcooked ratatouille, a bland mush of unseasoned tomatoes that hid a few stingy morsels of meat. Sheftalia sausages (£7.50) were well seasoned but their appearance was a world away from the traditional charcoaled skewers I've enjoyed on my hols in Cyprus. Pondering over the duo of lumpy, bumpy speckled brown blobs, my mind wandered to a letter from my GP and a graphic of the Bristol stool chart. The accompanying roasted garlic potatoes tasted phenomenal at least and dragged my mind out of the toilet bowl for the last dish.

If I ever find the need to complain that meat is not cooked enough, I’d expect the kitchen to respond with a reassurance that it was usual to serve it like that. Instead, the lamb koftas (£7.50), which were red in the middle were taken back without protest or comment. It was 10 minutes before I was asked if I wanted any more. Mark II were okay, but I’d grown weary of the whole situation by then.

Irritatingly, not one dish was served hot enough either. The only saving grace was the front of house staff who were professional, polite and positive throughout, repeatedly apologising and doing their best to make good of a situation that seemed beyond their control. I wanted to give them a hug and whisk them off to a real restaurant, far, far away.

The offer of complimentary dessert as compensation was taken and included a splendid peanut butter cheesecake with bitter chocolate sauce and caramelised bananas (£7) and a delicate but decadent chocolate and almond cake with dark fruit compote and salted caramel ice cream (£7). Sweet sensations after a troublesome meal.

I don’t know if the kitchen was just having an off night, but perhaps they need to stick with something they know and do best – afternoon tea and a boss brekkie. 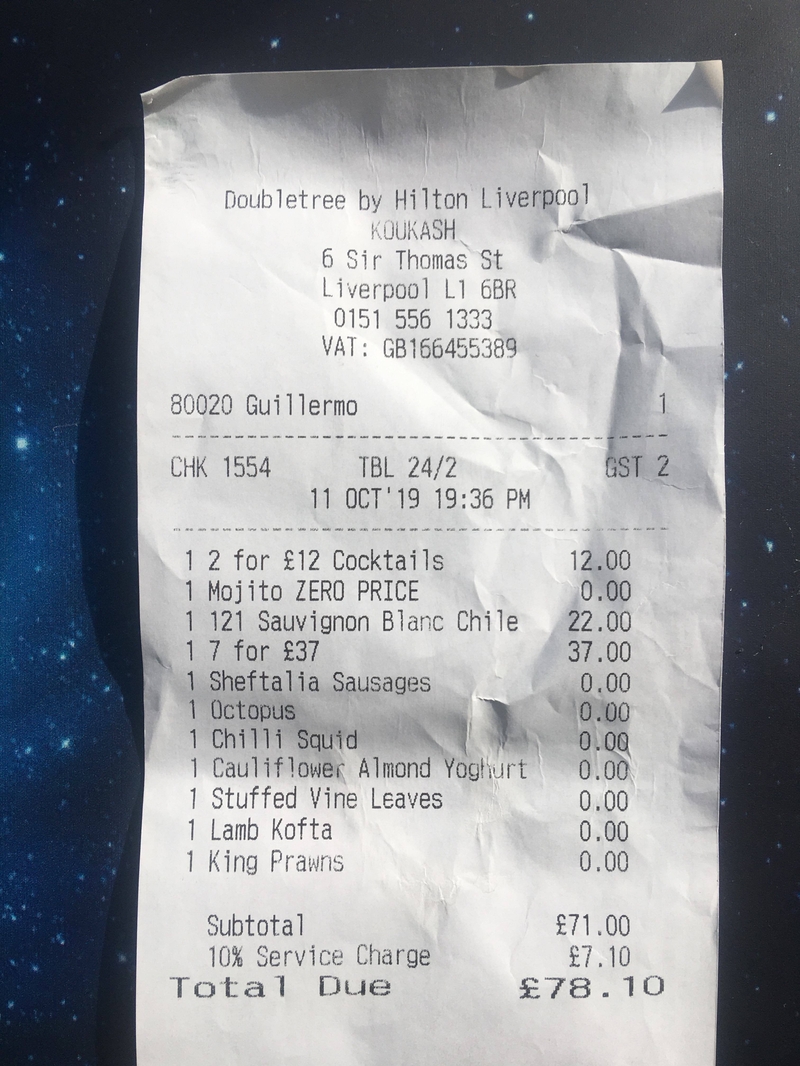