AMBROSE Reynolds, the tireless force behind St Luke’s “bombed out” church for more than a decade, is to hold the keys to the landmark once more.

Today he said he was “walking on air” after the decision finally came from the Mayor’s Office to award his bid the 30-year lease to run the World War II monument. It follows a public consultation and lengthy tendering process.

There were people last year who said 'just walk away, leave it'. But I never gave up hope that something would happen to turn things around

A new CIC, “St Luke’s Bombed Out Church Ltd”, will run the church as a heritage attraction and will be charged with delivering a range of community, charity and commercial events to secure its long term viability.

Reynolds is a director alongside Mark Hensby, owner of the Liverpool Organic Brewery. Their partnership follows a chance conversation between the two, late last year, which led to Hensby bringing his business acumen on board.

“I’m over the moon to have been given the chance to continue to operate St Luke’s,” said Reynolds today. “I want to make it a space that everyone can enjoy. I can’t wait to get going and we’ve already got some great events lined up to host in the gardens.”

The revival of St Luke’s, which suffered a direct hit in the May Blitz of 1941, began in 2007. Driven by Reynolds and his Urban Strawberry Lunch group, it became a city centre hub for events as diverse as tai chi, yoga, cinema screenings, art exhibitions - including one featuring the work of Yoko Ono - rock, pop, and classical music performances.

On the face of it, St Luke’s 2017 will operate in a similar vein but now there’s a solid mission to deliver: “A distinctive space for arts and events, that supports the vulnerable and provides opportunities for volunteering”, so it goes.

Reynolds is a well respected figure among those living on the margins in Liverpool City Centre - "I talk to everyone like they are all millionaires,"  he shrugs.

A particular emphasis, therefore, is to be placed upon inclusivity including working with the homeless, people in recovery from drug and alcohol misuse, mental illness and veterans with appropriate links to existing service providers. That could be anything from gardening to maintenance, but down the line, they say, genuine job opportunities could evolve.

In order to turn that all important coin, however, there will be ticketed performances, food and drink events, corporate dos and weddings.

Today’s decision, which is bound to be popular in the city, came out of the blue, ending a difficult week for Mayor Anderson who was on hand to inspect the work. He told Confidential how he would chase butterflies in the gardens as a boy living in nearby Kent Gardens.

“It was the only green space we knew,” he recalled.

For Reynolds, the news brings to an end two years of uncertainty which began when Liverpool City Council closed the decaying church for £500,000 worth of urgent repairs at the 185-year-old, Grade II* listed church.

At the time Reynolds appeared tired and strained, admitting he didn’t know if he would ever open up there again. 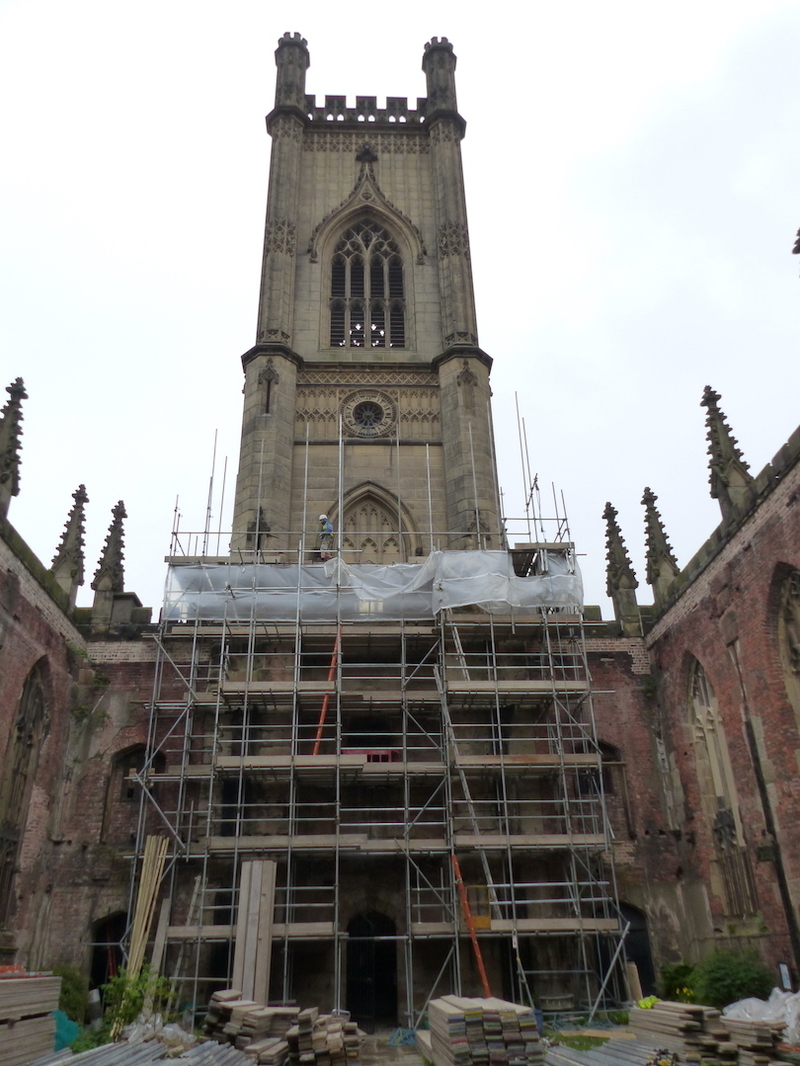 There followed a month-long public consultation on potential future uses of the landmark, then a long, drawn out bidding process.

Expressions of interest came from Reynolds, obviously, and  from other groups. The main rival, however, was a Manchester consortium

Today, it was a very different Ambrose Reynolds cutting a dash among the builders and the media pack that descended on St Luke’s.

“It’s the best news ever,” said Reynolds. “But after everything that has happened it still hasn’t sunk in. There were people last year who said 'just walk away, leave it'. But I never gave up hope that something would happen to turn things around.”

Late last year Reynolds’ father - the celebrated journalist Stanley Reynolds - passed away. In the midst of family mourning, once again the announcement of the bid winner was put on hold.

“Oddly, lots of things suddenly fell into place,” recalls Reynolds.  “I had contacted Liverpool Organic Brewery hoping for a general letter of support to strengthen our proposal -they had run beer festivals at St Luke’s in the past. But instead, Mark Hensby came right back offering a whole package of support. It was completely unexpected.”

Hensby added: “Liverpool Organic Brewery had already run successful beer festivals at the church and Ambrose and I got along from the word go. We work well together and he understands the need for St Luke’s to work on a commercial level, as well as on a community and cultural level. There is a long road ahead, but St Luke’s has immense potential and there is no reason why it can’t continue to be many things to many people.”

The church will reopen on Monday June 3 with a performance connected to the Sgt Pepper 50th birthday festival.

As well as overseeing the repairs the city council has also committed to install external feature lighting later this year to enhance the appearance of St Luke’s as a prominent historic landmark, in the same way that lights are configured at St George’s Hall to mark special occasions.

Bombed Out Church Ltd has also set out a plan to invest in the venue which, subject to heritage funding, could include reinstating the balcony in the nave, mezzanine floors in the vestries and potentially a glazed canopy in the chancel with the nave remaining open to the elements.

Councillor Ann O’Byrne, Deputy Mayor of Liverpool, said: “The importance of community involvement emerged as a key theme in the public consultation and the Bombed Out Church Ltd proposal was the most closely aligned to what we all want to see take place at St Luke’s.

“The city council believes that Bombed Out Church Ltd is best placed to bring St Luke’s forward into a new chapter with a greater degree of accountability, community involvement and operational sustainability. We look forward to working with them and helping to make St Luke’s a vibrant and unique space in the heart of our city centre.”

Mayor Anderson added: “I grew up in the area around St Luke’s and its history and symbolism is something that is very close to my heart as it is for generations of Liverpudlians. I gave a commitment that this beautiful building will always belong to the people of Liverpool but it is not enough just to preserve it.

“As one of the architectural centrepieces of our city and as a defining memorial to the blitz it is a unique asset and should be celebrated as such. Now that the restoration phase has completed the goal now is to ensure it is treasured by future generations.”