THIS comedian walks into a pub...

Last seen hosting the Royal Variety Performance, Liverpool comic John Bishop may have been rattling his jewellery with royals and the Establishment on Monday night just gone, but by the end of the week he was cracking gags in a city centre boozer for those of us in the cheap seats.

The comic, who is these days at home adressing 20,000-strong stadium crowds, turned up at the Slaughterhouse pub in Fenwick Street completely out of the blue. 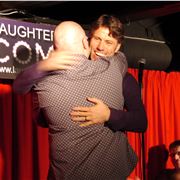 A Big Hug From MC Chris CairnsThe comic played a 20-minute stand up set to an atonished crowd at the Laughterhouse comedy club where punters had gone along expecting a performance by Keith 'Nige' Carter, Chris Cairns and Neil Fitzmaurice.

Said one onlooker: "He slipped in the back,  got up on stage and supprised the crowd, then he slipped back out again."

Paula Harrington, who runs the laughterhouse club, told Liverpool Confidential: "John contacted me and wanted to pop in and do a short spot last night and we were obviously delighted.  It was a real Christmas bonus for our audience.

"John tells me that he loves to return to intimate rooms so that he can enjoy the atmosphere and run his new material past a really honest crowd - the Laughterhouse crowd are ideal for this because they are such a comedy savvy audience and are used to such brilliant comics so they will let him know if the material is not good enough. 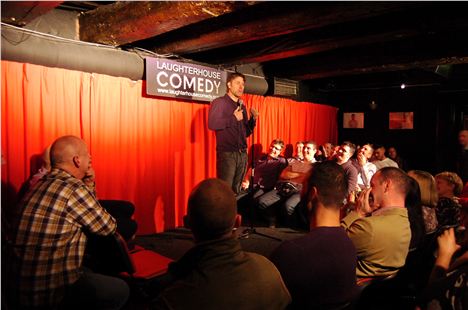 She added: "The reaction when he stepped on the stage was so special - he hid backstage and nobody had any idea that he was about to take to the stage.  I have been booking and running comedy nights for nearly ten years and I can honestly say that this was a highlight.

"John is a real comic and works hard to ensure that his new material is as strong as possible by travelling and testing out his material - this is a sign of a true professional who cares about his audiences - when comics reach this level its so easy to pay a team of writers to do the work for you but he chooses to write and test his own material.

"He tells me that our room is the perfect room for comedy which is so flattering for a comic like John who is regularly selling out arenas to say."

Pictures by Dave 'the Pap' Evans