Exclusive: How an over-the-limit driver charmed the traffic cops

IT'S one thing to get tanked up at Christmas. It's quite another to think on your feet, however unsteady they might be, when you've got the car in tow.

And while it was a bit late in the day when one cheeky Liverpool driver's forward planning kicked in, it was a desperate case of - you don't ask, you don't get.

This seasonal plea for clemency threw traffic wardens off their stride on a bustling suburban high street, somewhere in the city, this morning.

Pinned to the windscreen of a car, the morning after the night before, in an hour-limit zone, was this note. As an added incentive, the (non) driver had attached a packet of crisps to the windscreen, a gift for the civil enforcement officer’s enjoyment. 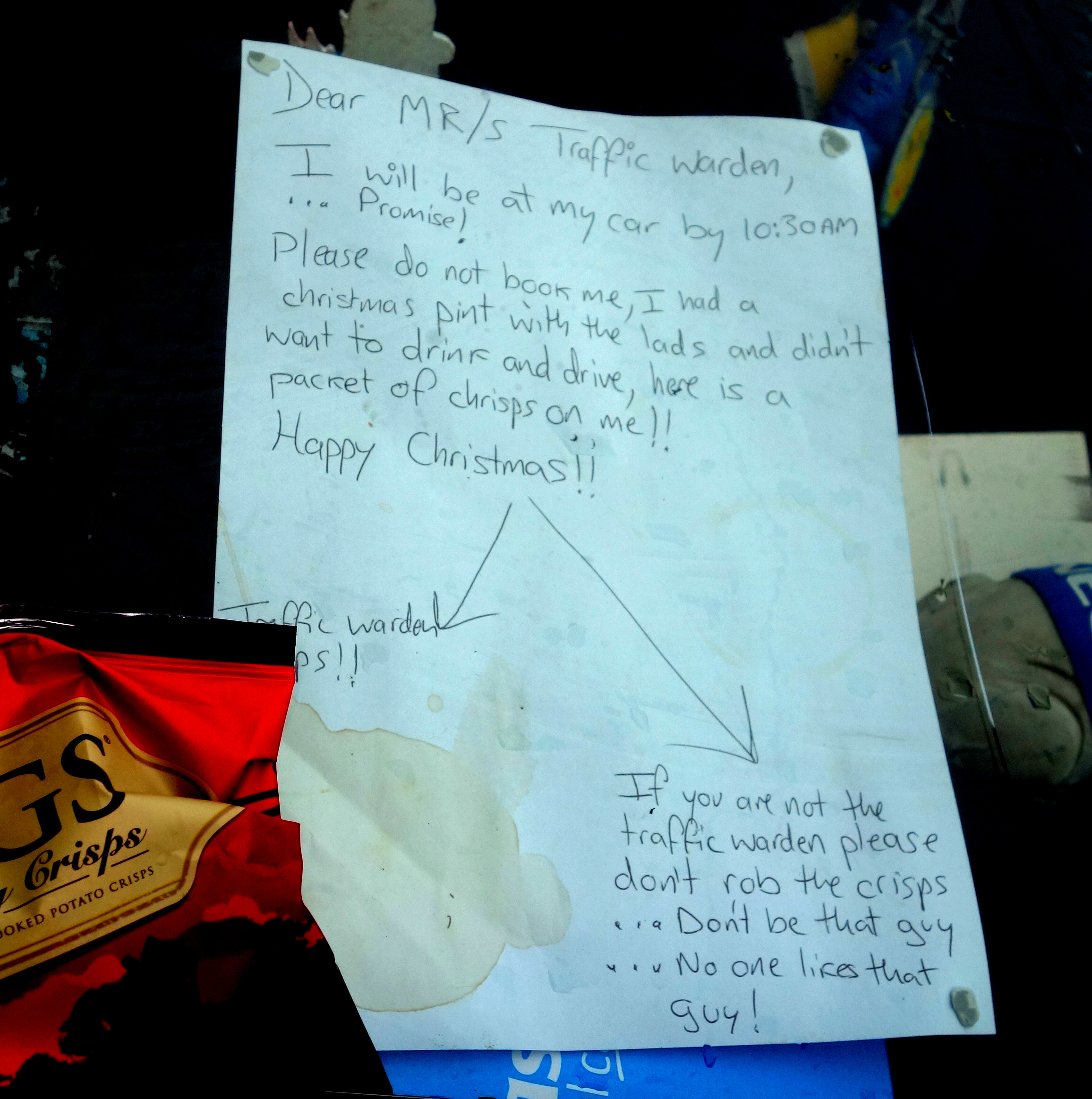 Please do not book me. I had a Christmas pint with the lads and didn’t want to drink and drive, here is a packet of chrisps (sic) on me!!

Of course, our savvy friend, perhaps realising that the munchies might prove too much for some, appealed to the better nature of not just the 24-hour penalty people but also anyone thinking of pinching the crisps.

The message ended: “If you are not the traffic warden, please do not rob the crisps… don’t be that guy…. no one likes that guy!”

Confidential spotted the car, the note and the traffic wardens (two of them) who were hovering across the street, nervously glancing at watches  - and the vehicle - at least half an hour before the 10.30am deadline.

Crucially, its windscreen was still ticketless.

This evening our picture was on social media for only a few minutes before we had a name and an outcome.

According to very reliable sources a blind eye was turned. Our man made it back to the car by the skin of his teeth and will live, fixed penalty free, another day. We aren't naming him, or the location, because we are responsible like that and worry about the traffic wardens getting into trouble.

AND NO ONE LIKES A SNITCH.

As for the the crisps, they remained untouched (but they were those posh looking farmers market ones so what do you expect?).

The moral of this George Bailey stye miracle on Unnamed Street is that it's pointless to try to bribe a traffic warden - try appealing to their Christmas spirit instead.

Don’t blame us if it doesn't work.