Navigating the many twists and turns that make up the Baltic Triangle isn’t something I would recommend on a cold Monday afternoon with an empty stomach. Trust me, I’m a man that’s lived it. But as my partner and I were walking, each of us silently judging the other for not looking up the address on Google Maps, we spotted it, and felt silly having missed it.

A bowl of scouse, no matter how fresh or well cooked, isn’t the most appetizing thing to look at. But looks can be deceiving.

Fodder Canteen certainly catches your eye when you do find it, our attention immediately being brought to their banner, which boasts ‘proper food cooked properly’. And whilst that slogan may be a bit of a mouthful, hopes were high that their food would go down much easier.

Inside we were greeted with more warm colours but lots of empty tables. I didn’t really see this as an indicator of much; the lunch rush had probably just died off, and it was a Monday afternoon, whatever that means - although, a little music might have enhanced the quiet atmosphere. The two women who worked there were sat chatting, sipping tea. They said hello and smiled at us as we automatically headed for a table. We already felt at home.

The menu is simply laid out and gives a brief history lesson on Liverpool’s famous ‘scouse’ dish. Even if you already know, it’s still a nice touch. Fodder serves three variations; the traditional mutton, chicken, or a vegan option.

We headed up to the counter to order. I decided to go for a single bowl of the traditional Mutton Scouse (£6.50) - despite recently trying to cut down on eating so much meat and fish, the veggie option felt like something of a betrayal. My partner chose the well-priced soup and sandwich deal (£5).

As I tried to order, the woman looked a bit confused. I mumbled through something along the lines of “I think I’ll go for the mutton … but I’m not too sure … ”. “Oh! Haven’t you been here before?” She said. I blushed. “This is my first time, yes.” But she was quick to smile, tell me that the mutton scouse was “pretty fit” and explain that we just help ourselves.

The self-serve style of service goes in Fodders favour and compliments the laid-back atmosphere. If it had been busy that scouse station could get crowded though. I filled my plate and helped myself to nearby red cabbage, bread and butter.

Let’s be honest. A bowl of scouse, no matter how fresh or well cooked, isn’t the most appetizing thing to look at. But looks can be deceiving, and Fodders scouse is deceptively good. The mutton is so tender that a spoon becomes a knife. The veggies are all so tender that every mouthful falls apart. And just when you think you’re getting tired of the same flavours and textures, the red cabbage is there to wake you up from your scouse-induced daze. This felt like the ultimate home-made comfort food. This is comfort food so great you’d wish you brought your PJ’s.

The soup of the day was leek and potato, and though I think it was a tad over seasoned, it was still incredibly rich and creamy. It was also a perfect companion for what turned out to be a colossal ham salad sandwich, made to order and still hot from the oven with generous shavings of gammon rather than your typical slices of cold ham. Served with it was a simple salad of greens and peppers, and a side of slaw that wasn’t particularly amazing. But all for £5 leaves little room to complain.

Dessert just had to be a Wet Nelly (£4) another local recipe - described by Fodder as “the scouse version of a fruity bread and suet pudding.” We decided to take it home as we were stuffed. I’m not a particular fan of bread suet pudding, but the wet nelly was surprisingly pleasant. The texture makes for quite a dense cake, but as the flavours are so light and balanced, the whole thing goes down really well.

Fodder reveals itself eventually to be something of a hidden gem in the Baltic Triangle, and indeed Liverpool. Or maybe I’ve just been looking in all the wrong places. 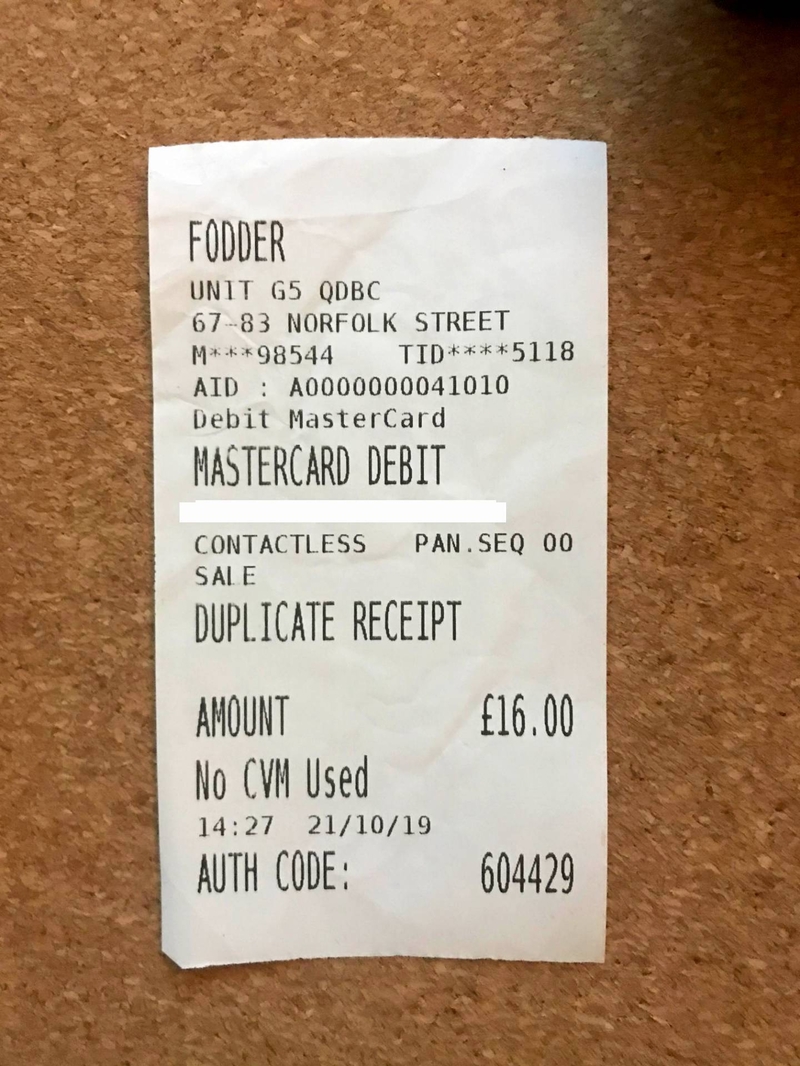