Spectacular isn’t a word I use very often about a restaurant without having eaten there; but walking out of a lift into Panoramic 34, you enter a room that makes the hairs on the back of your neck stand up.

Apart from a room furnished with great taste, current colours and very comfortable furniture, you walk up to floor-to-ceiling windows and you have a glorious 360-degree view of Liverpool, the mile-wide River Mersey and out onto the estuary and beyond to North Wales.

The normal rule for the most spectacular restaurants across the world is that they don’t deliver with the food. It’s like they’re saying, “never mind the quality, feel the width”.

A notable exception to this is restaurant Le Jules Vernes, halfway up the Eiffel Tower. Not only are those views spectacular, but when I first went (it was my 21st birthday weekend, a long, long time ago) it had been awarded a Michelin star. The current chef, Frédéric Anton has retained it.

However, I’m here to review Panoramic 34. All fur coat and no knickers? Let’s see.

I’ve been keeping an eye on a promising young chef for a few years now. He’s Elliot Hill, a good-looking fella with an engaging smile backed up with some steel behind the eyes.

According to his contemporaries, Elliot Hill is out to make an impression. He arrived in January 2020, so he hasn’t had much of a chance to carry through yet. At least he’s had time to practice during the lockdown.

Dining at lunch, I’m seeing quality. It’s firmly “modern British”, described on the menu in the minimalist manner that some may find irritating. However, when you’re putting more than three or four ingredients on the plate it's difficult to say anything else, other than list them and be damned.

The lunch menu is pretty sturdy, consisting of two courses at £35 or three for £42. There are five choices on each course and the selection works for me.

To steady my nerves, having peered down to the docks from 34 floors up, I kick off with a large Tanqueray gin and bottle of Franklin and Sons tonic (£13.50) - I haven’t had that brand of tonic water before, but I’ll have it again.

A bottle of Rioja Blanco from Alavesa by Bodegas Zugober (£39) winks at me from a stapled together grubby wine list. The contents of the list are great if you can get past the pre-owned look of the thing. The quality is rather classy and there are great bottles around £30, whilst the extensive range of wines by the glass is very useful.

My Rioja for this menu turns out to be a 2019 and it’s bang on if you’re not eating red meat. The wine has a creamy ground blanket, carrying peaches and cinnamon across the pallet with some oak, which isn’t a bad thing but with a couple of more years under its belt it’ll do its work with a little more subtlety.

And that’s where they are a bit naughty in my opinion; there are no vintages listed.

Nowadays when reviewing, I take a tip from the man who taught me to review, the least pretentious yet funniest of all the great food writers, Drew Smith, ex-editor of The Good Food Guide in its heyday.

“Order stuff you don’t like the look of. If the chef's good, he’ll sell it to you.”

I’ve never had a satisfying chicken terrine yet. Indeed, the only terrine I’ve had that I liked was a fish terrine at The Connaught back in the ‘80s when salmon was wild and Chef Michel Bourdin was in his heyday.

I order the roasted cornfed chicken terrine starter to give me something to moan about. This terrine is unctuous and seasoned so perfectly I nearly weep tears of joy. It has an emulsion of lovage, celery stalks and chicken stock.

On the plate are a few peeled grapes that have been cut in half and de-seeded, chopped toasted hazelnuts and squares of crispy chicken skin, acting as texture and little seasoning boosters.

I think the chef has Escoffier’s cookbook from 1903 stuck down his whites. It is fabulous in every way.

The seared beef tartar on the other side of the table looks the dogs’, but I am so into the terrine that Jake has finished by the time I start to pay it any attention.

“Chalk Farm trout, smoked eel, cucumber, caperberry, elderflower, broad beans” is another dish I wouldn’t normally order. This type of fish usually arrives as a fillet from a young, weak and tasteless thing in the form of an insole for a size five shoe.

This isn’t - it must have come off a three-to-four-pound fish, cut across a big, fat fillet, skin crispy and salty, meat cooked to the point where the flesh just turns opaque.

Big flavours again here. I think the cucumbers are in the wrong dish, bland and watery, the eel gets drowned a bit. A delightful dish nonetheless.

Again, by the time I look around, Jake, who hasn’t dined with me very often, has wolfed down his main course of “our favourite cuts of pork” leaving a plate wiped clean. Looked good mind you.

The warm potato salad with mint, sour cream and spring onion (extra £4.50) is undercooked, a major kitchen crime. The thick cut chips with Grana Padano and black truffle (£6) are a smidgeon away from lifting skirts. But the broccoli satay with salted peanuts (£4.50) is angel food.

Moving on to the pudding section, the “peach melba our way” looks over-worked, but is enjoyable. Lemon, mascarpone and sorrel (bit like a cheesecake) is declared the outright winner.

We beg a couple of bits off the afternoon tea trolley, a chocolate cake with those fantastic morello cherries in the mix, and a macaron. I can say the pastry team isn't letting the side down.

Some actual pastries would stretch the brigade. Mille-feuille? A peach melba tarte tatin for two with thick fresh double cream from a pouring jug would get me right at it.

This is a restaurant that should be visited from all over the region. It’s not well known outside Merseyside. It’s worth a trip for the view. I can assure my readers that it is well worth a trip to eat this excellent brigade’s food. Service is special.

And, oh my… the view. Spectacular. Go. 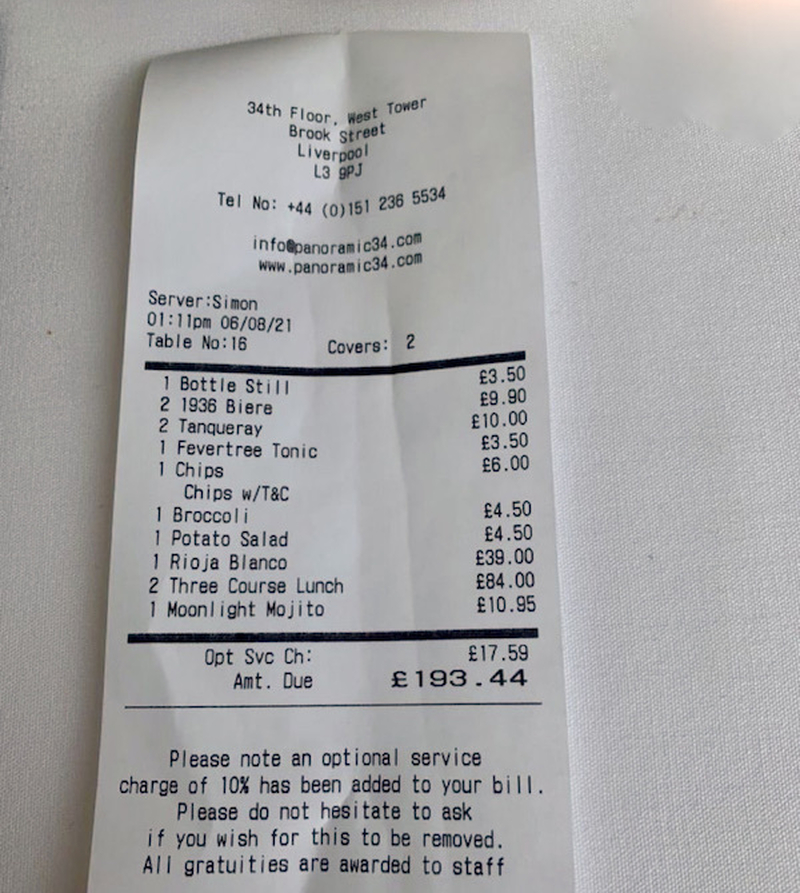 Liverpool's top dining deals and eating out offers: August 2022
What you say
Read Next
● / Clubs