‘As bewitching as the Black Cat itself’ - El Gato Negro, Exchange Flags, reviewed

I’m rather partial to a scotch egg so was thrilled to hear that Alan Partridge’s petrol station snack of choice had finally cracked the market as the signature dish at El Gato Negro.

Chef Patron Simon Shaw has thrown plenty of Spanish sparkle into the mix to come up with a morcilla version featuring a soft boiled quail egg, served with mushroom duxelle and dotted with apple purée and aioli. One eggstatic diner described them as ‘nipples of happiness’ and when you see them you’ll know why.

They’re not your usual party pick and neither is the price at £9.50 for three ‘units’. If you want to avoid a squabble over the middle portion, they’ll let you add an extra one for £3.20. Small plates means big money and as a la carte sharing menus have increased in creativity and complexity, so has the cost to diners. With elite restaurants valuing one small dish at more than a main meal down the road, is the yolk really on us?

Proving that the bubble is yet to burst, Manchester’s award-winning El Gato Negro has now launched in Liverpool to a fanfare of foodie fever. Scotch eggs alone don’t afford Michelin and AA Rosette recognition and beyond the beautiful interior, elegant furnishings and panelled nooks (I don’t remember The Vincent being half the size) the menu at El Gato Negro is as bewitching as the Black Cat itself. I wanted to try everything.

Old favourites like meatballs, croquetas and patatas bravas are reasonably priced at £6-£7, but it’s easy to get carried away at the top end of the menu with the likes of chargrilled octopus for £13. In the spirit of Money Saving Expert Martin Lewis, let’s do a little price comparison. At Bacaro on Castle Street, the most expensive small plate is chargrilled fillet of beef with tempura prawns at £9.95. Onglet steak will set you back £9.50 at Maray and £9 at Neon Jamon. Slow-cooked Catalan pork belly from Lunyalita is £8.95.

But back to El Gato Negro. We kicked off with a summery Aperol Spritz (£8.50) while our host swept away the wine glasses prematurely and asked if we were familiar with small plates. I should have gone to the kitchen myself to check we were all on the same page, because I feel like pulling my teeth out when they bring all the vegetable tapas first.

I can’t call it the ‘boring’ stuff on this occasion though, as both held their own with powerful flavours. Roast beetroot with whipped Monte Enebro cheese, orange, dill and hazelnuts (£7.50) was gracefully presented and tasted every bit as good as it looked; rich, creamy, sweet and citrusy. Spiced aubergine (£7) was doused in a devilish tomato fritarda sauce and drizzled with rich onion confit, the perfect pairing for thin and crispy lavosh bread.

Shell-on tiger prawns in chilli and garlic (£11 for four) arrived with a dollop of lemon butter, meaty but a little overcooked and rather underwhelming at £2.75 per prawn. Meanwhile, sizzling aromas surrounded from all corners as I watched plate after plate of scotch eggs leave the kitchen, only to dance past my eyes and land on another table.

‘That’s the fifth plate that has gone past,” I said. “And all those people sat down after us!’

With no food on our table, we glugged down the Bodegas Navajas Blanco (£28) a fresh white rioja from the cheaper end of the wine list that stoked my appetite for the chargrilled portion of the meal. Lamb with chickpea purée and harissa (£13.50) was fantastic, a succulent trio of skewers that packed mountains of North African flavour, while the chicken thighs paired with shabu shabu dressing and fried chickpeas (£10) were a dainty delight of tender pink meat and salty seasoning

But guess what? Still no scotch eggs. More of the bloody things swanned past as we finished the wine and I was promised again and again that mine were on the way. Eventually, the manager confessed that there had been a table mix-up. Someone, somewhere had egg on their face. But it definitely wasn’t me.

When the little bastards did arrive, snatched away from another hungry table, I really wanted them to be the best scotch eggs in the world. Sorry Simon, but that title remains with Maso a Kobliha in Prague. Go there and try them, trust me.

As I digested the bill at El Gato Negro, I wondered if I’d just eaten the emperor’s new clothes. The scotch eggs were apologetically taken off the final amount and I guess we can put the service hiccups down to second night nerves. The food here is really, really good, but if you’re going to charge those prices then it’s got to be the best in the world, or at least the best in the city. And for me, it isn’t quite there yet. 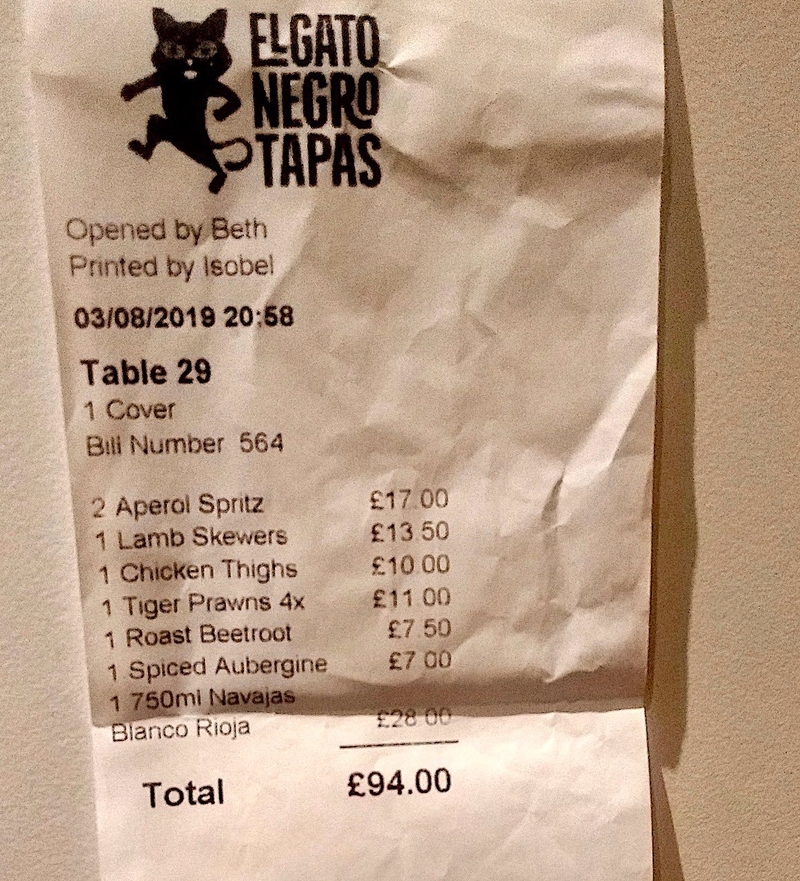