‘You should wear your big pants for this one’ - East River, Allerton Road, reviewed

What is it about bagels that makes them so irresistible? Toasted with butter, smeared with cheese, or packed to the rafters with whatever you have on hand, they’re practically perfect in every way and I have never come across a bagel I didn’t like.

East River was born out of an appreciation for the New York Jewish Deli.

I still remember my very first bagel. I was eight and halfway through my first trip to New York City. A relatively simple gastronomical experience, I know. But for an awestricken eight-year-old obsessed with all things American, it was a moment of pure ecstasy, and the novelty of the New York Deli Bagel has never truly left me.

So, imagine my joy on hearing there’d soon be a place where I could relive my moment of eight-year-old ecstasy, no further than the suburban metropolis that is South Liverpool’s Allerton Road.

East River was born out of an appreciation for the New York Jewish Deli. You’ll find one in every neighbourhood there, acting as a round-the-clock spot for locals to eat good food and relax amongst friends. And this newly-formed Liverpool version seems providing to be exactly that.

Inside it’s a Millennial’s wet dream: dusty pink interior and exposed brick walls, upon which hang some of New York’s finest exports such as Madonna, Debbie Harry and Biggie Smalls.

The menu is simple; bagels to the left, a newly-launched brunch menu to the right and a few Brucey Bonus bits down the middle. It’s eyes to the left for me and could only ever be The New York (£7) on a poppy seed bagel.

In the name of, er, journalism, we order some crispy maple chicken bites (£5), which might not be very ‘breakfasty’, but this is my review and I defy you to resist anything that comes with a side order of dipping gravy.

My New York bagel (£7) with its cascade of cream cheese hit the spot in so many ways. A true guilty pleasure, it was salty, stodgy and very messy to eat. By the time I’d finished, half of the filling has splattered on to my plate – and around my face – so maybe don’t order if you’re trying to impress. Thumbs up for the pot of coleslaw, too - a zingy addition to an otherwise heavy meal.

The Hipster Breakfast (£9) was a spectacle – you should wear your big pants for this one. Four slices of halloumi, two poached eggs, smashed avocado, coleslaw, two latkes (a Jewish staple of shredded potato and onion) and, of course, a bagel. This was no easy feat for my sparrow-like mother, who came along with me, but a worthy challenge nonetheless.

Drinks next; so a couple of mocktails. Mum goes for the Kool Aid (£4) which looked like a high school chemistry experience gone wrong, but anything with pomegranate and cherry gets an A* from us. My virgin Soho Spritz (£4), a refreshing mix of watermelon, lime, coconut water and mint. It wasn’t easy omitting the gin, but it’s 11am and I’m eating chicken nuggets for breakfast with my mother – let us maintain a little decorum.

Besides, it just provides a reason to come back here in the evening. When the sun goes down and the Saturday shoppers have retreated from the high street, East River changes its stance, offering its evening frequenters a long list of cocktails and a sizeable mix of New-York-street-food-inspired small plates, bagels and other picky bits (including those chicken bites).

That said, it really doesn’t matter what time of day you visit; that’s the beauty and the whole concept of this place. East River is somewhere for locals to catch up and eat bagels; it’s neighbourhood eating at its finest.

I can only say bravo, East River. One bite of those chewy, squidgy bagels and I’m eight years old again, trying my first bagel on Manhattan’s Upper East Side. And with eleven other bagels just begging for me try them, it’s safe to say I’ll be back at East River in a New York minute. 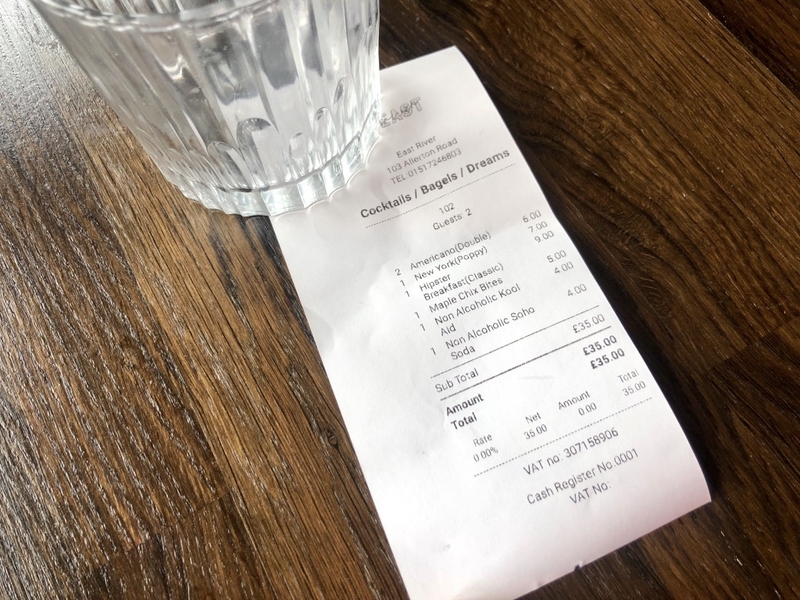