In the same way that a notice announcing “You don’t have to be mad to work here, but it helps!” might lead you to believe you were entering the grimmest of workplaces, the name “Crazy Pedro’s” emblazoned across the front of a restaurant could suggest that fun times were far from guaranteed.

And if you then discovered that this same venue had claimed a place on TIME magazine’s list of the world’s wildest pizzas by offering a specimen daubed in Cadbury’s Crème Egg, you might find yourself longing for the days when pineapple chunks were at the outer limits of pizza insanity.

Put simply, a declaration of “I’m mad, me!” isn’t necessarily what many of us are looking for in the places we choose to eat and drink.

​If the party was intended to be full-time, it seemed we’d arrived on the party-goers’ day off

However, Crazy Pedro’s doesn’t care about that. This is an establishment that has done just fine over in Manchester since opening in 2014 and, with a third outlet now open on Parr Street, in Liverpool’s Ropewalks, there appears to be plenty of mileage in this particular brand of culinary madness.

Billed as a “part-time pizza parlour, full-time party bar”, it can’t be denied that Crazy Pedro’s plays its part in whipping up expectations of tequila-fuelled, Crème Egg-engorged scenes behind its doors. But on the evidence of this visit, the way to avoid the Bacchanalian antics is by turning up in the middle of Saturday afternoon.

The pace may well pick up later in the evening or once Crazy Pedro’s has bedded in to its new home, and given the venue’s Ropewalks location and healthily stocked bar, it seems likely. 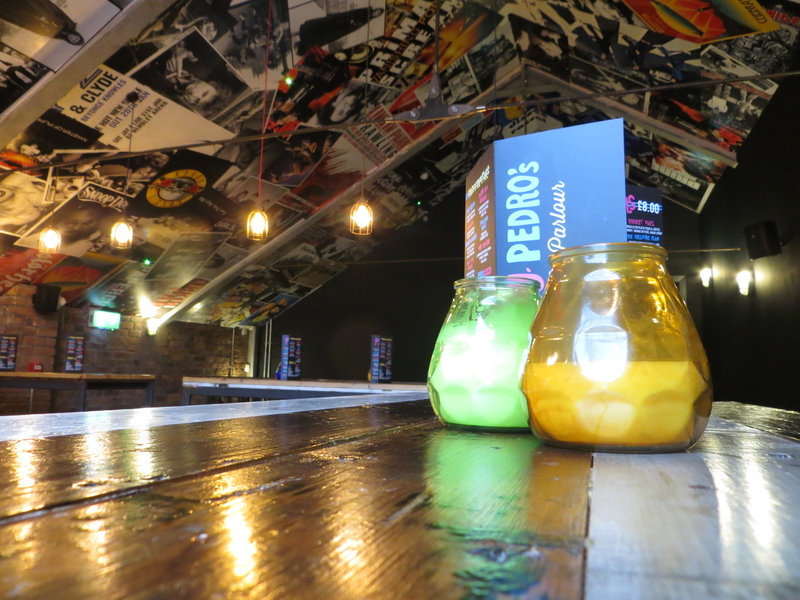 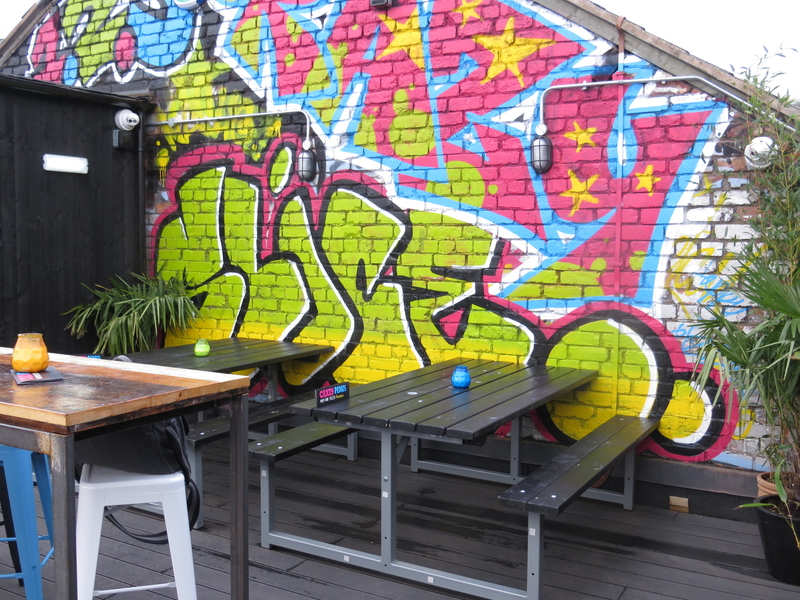 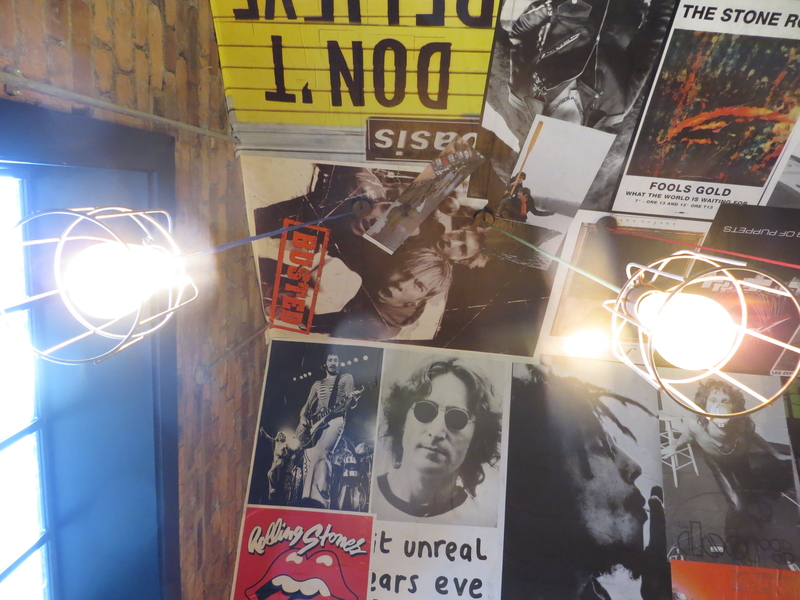 Inside there’s a dark, cosy bar area dotted with tall wooden benches, while upstairs things lighten up a little with windows looking over towards Seel Street. If there’s an air of mid-90s HMV shop about the interior – all that black, blue and pink, and a ceiling lined with rock promo posters – the aroma of pizza is enough to shake off the memory of those halcyon days when the going rate for a CD was £16.99.

But though the choice may be limited to pizza or another kind of pizza, this is an altogether wackier world, where waffles and mini hamburgers sit alongside the usual toppings. And while the self-conscious quirkiness may seem a bit too spinning bow-tie for some, the combinations do seem to have been put together with a rather un-crazy consideration for what works.

For instance, the KFC pizza is built around a generous scattering of sweet, honey-fried chicken chunks and a tangle of kimchi coleslaw (a rather tame, entry-level kimchi, it has to be said). It worked well alongside the earthy grapefruit and smoky coal tar notes of the Tijuana Brass cocktail (£8), delivering a mildly out-there experience that was far more memorable than a standard, build-your-own mushroom and pepper combination.

Even better was the Thai Quorn Dough pizza. With Quorn pieces, baby sweetcorn, mange tout, chillies in two vivid hues and a big fat dribble of fragrant Thai green curry, it elicited the response, “This might be the nicest pizza I’ve ever had”. Washed down with a terracotta vase of Rocket Fuel (£8) – a tequila cocktail with coffee, Dubonnet and orange bitters – it was another pizza experience that will stick in the memory. And be honest, how often does that happen?

The Nacho Libre was another favourite, being heavily adorned not just with cheese, guacamole, salsa, sour cream and jalapenos, but with a carpet of tortilla chips too. The only choice that underwhelmed was Pedro’s Pepperoni. Although the pepperoni was cut pleasingly thick and had a good spiced kick, it lacked the clever sense of novelty that Crazy Pedro’s evidently does well. 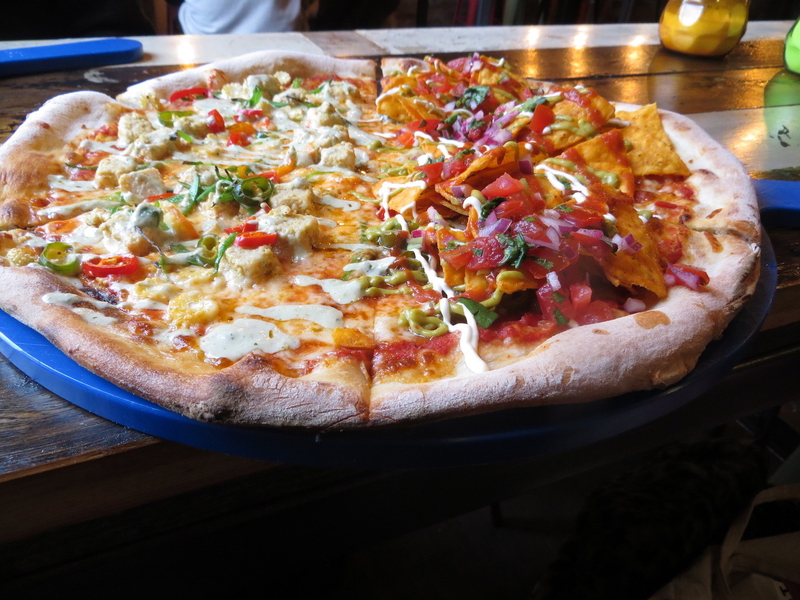 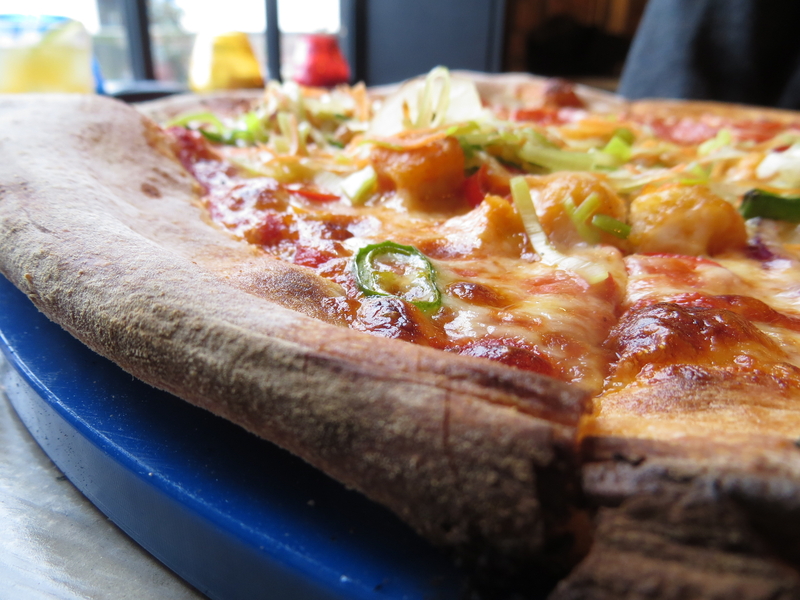 All pizzas at Crazy Pedro’s are 16 inches across the middle, which is huge. They are also made with their own dough, which is thinnish and floppy, bubbled and tanned at the edges, though with more depth and heft than a true Neapolitan effort.

They are £15 for the full hit, but you can go half and half with different toppings on each side, which is what we did. One shared between two would make a more than adequate lunch. Alternatively, a reduced selection is offered by the slice at £3 a time, which seems good value for a modestly sized belly filler to accompany a beer or two.

There are no puddings (the fabled Crème Egg pizza appears to have been an Easter special rather than a menu staple) so we finished off with a couple more cocktails, this time plucked from the non-tequila selection. 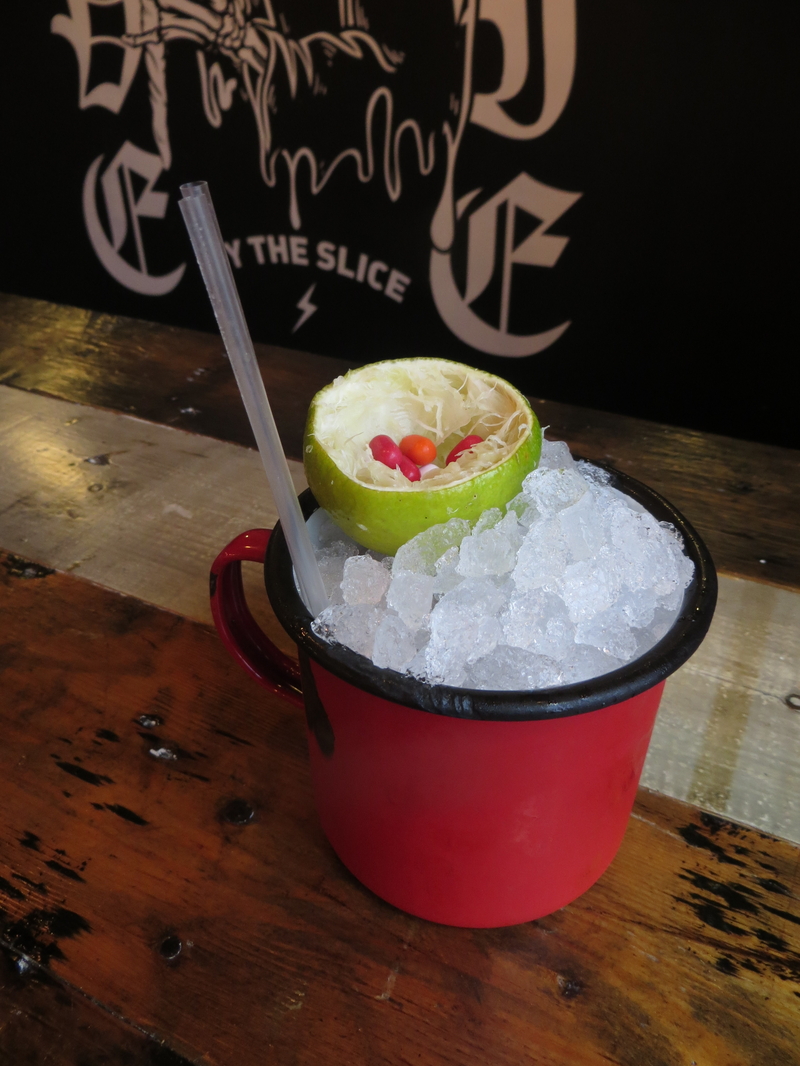 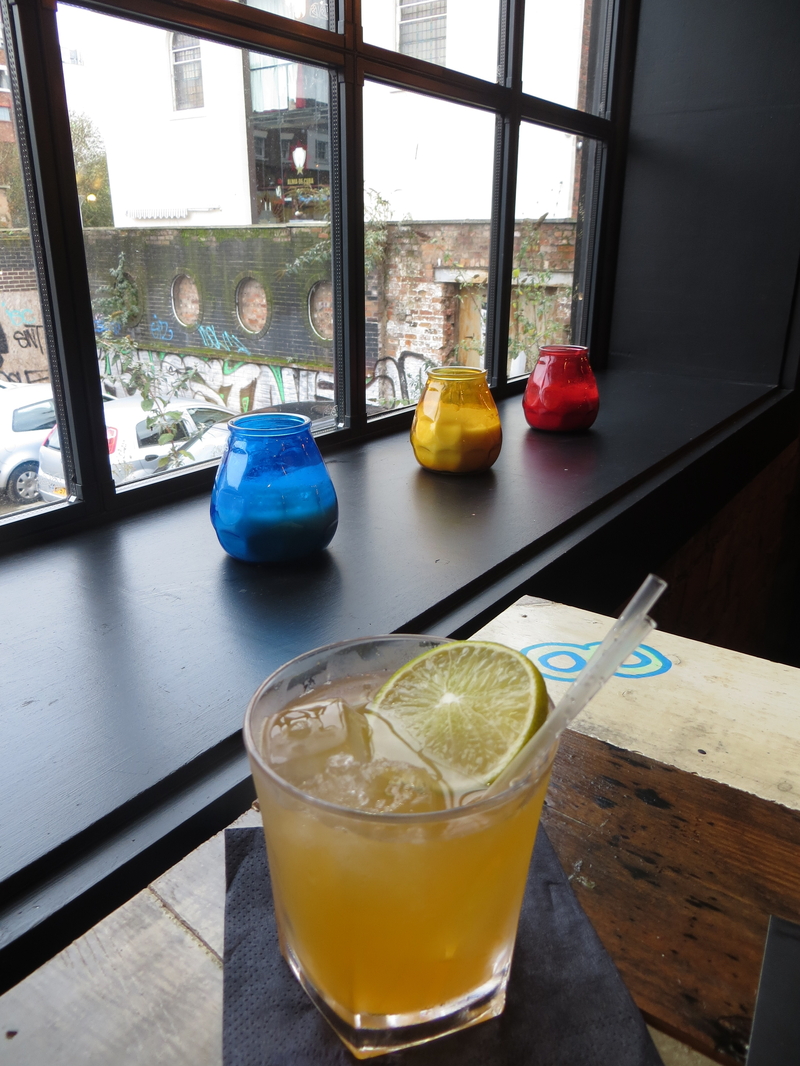 Sleeper Agent (£8) was served simply in a tall glass garnished with mint and blueberries. With vodka, Licor 43, Chambord and prosecco, it had a fruity astringency that didn’t quite deliver as a dessert. An enamel camping mug of Ped’s Medz (£8) tasted far more indulgent, consisting of a couple of rums mixed with a selection of tropical fruit flavours. We drank them on the rooftop terrace overlooking Parr Street, and though the chill breeze blowing up from the river kept trying to force us back indoors, we stuck with it and enjoyed the sense of putting a new perspective on a familiar stretch of the city.

The food is clearly intended to accompany the drinks rather than the other way round. There’s no table service, the plates are made of paper, and although it was quiet on our visit, it remains to be seen what happens after dark when its “full-time party bar” transformation is complete.

But for all its hints about end-of-days antics and torrents of tequila, someone has still paid attention to the details. The staff are friendly, the pizzas are good, and the cocktails are skilfully made.

In fact, Crazy Pedro’s may not be as mad as it says it is. But that’s fine, because it’s all the better for its secret restraint. 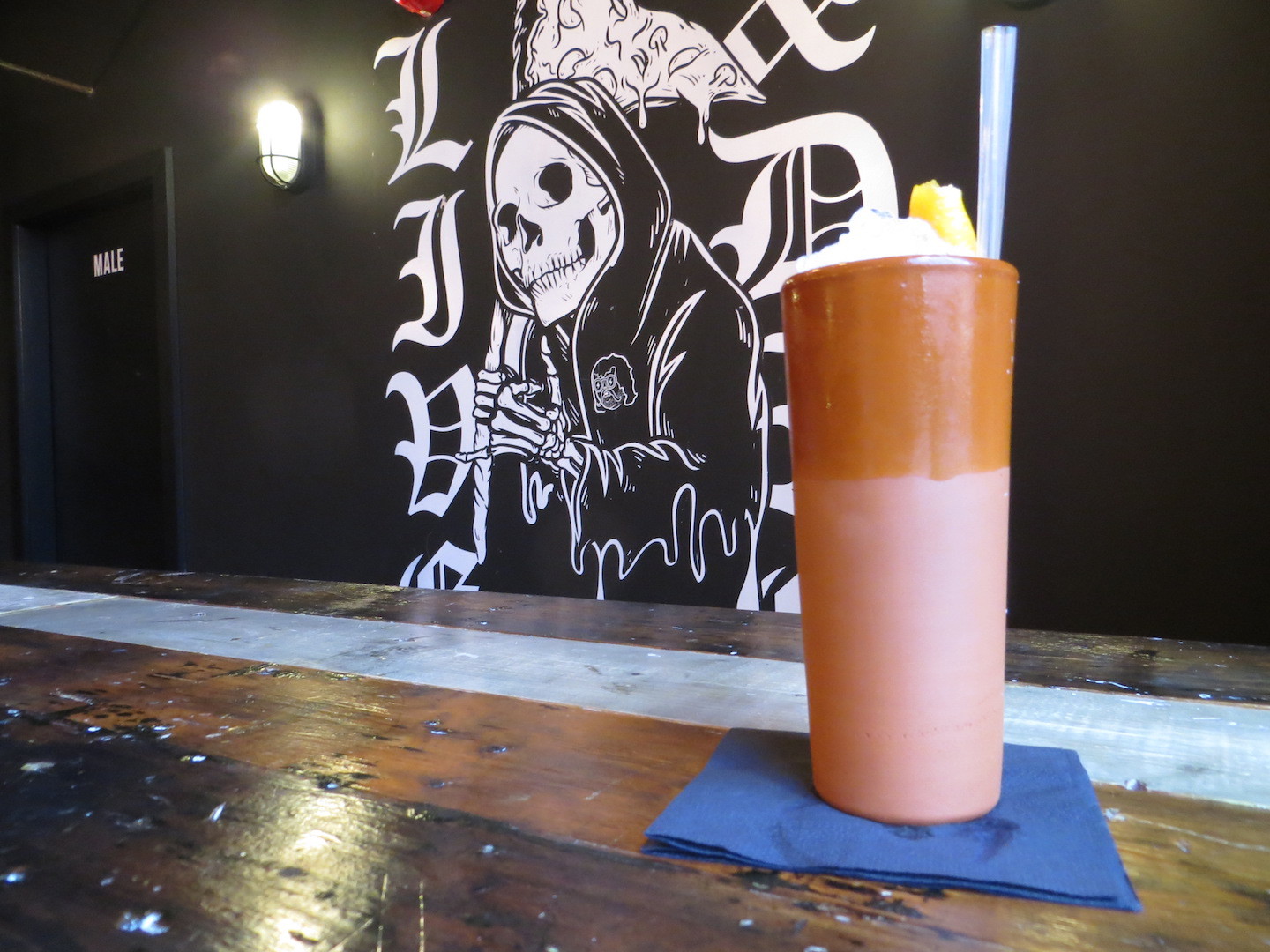