Our monthly round up of the best dishes in town

We do things differently in Liverpool, and that is a wonderful thing. From top notch fish suppers, to aromatic Sunday roasts and an outstanding Bolognaise made from surprising ingredients. Our food and drink writers have been eating their way around the city to report on the dishes they recommend are worth your time and money this month. 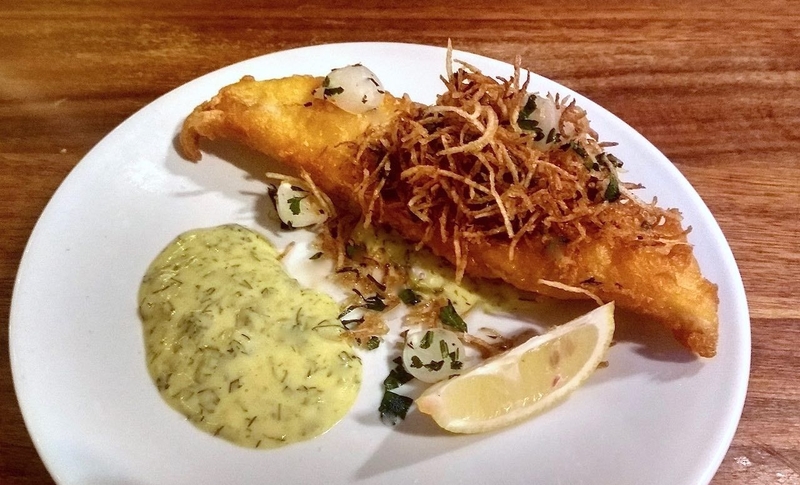 I was hooked from the moment I heard that Oktopus had launched its own version of a Friday night chippie tea. Head chef Christopher Ineson has already proved himself the codfather of Liverpool’s restaurant scene and this is a criminally good twist on the British classic with crispy beer batter, crunchy matchstick fries, sweet pickled onions and tangy tartare sauce. My only regret was going overboard on the ‘sharing plates’ that evening, so I’d recommend you match this one with a modest appetiser of popcorn mussels and malt vinegar mayo (another Okto favourite) and raise your glass to the weekend with a large Basa Blanco. They say they’ll be serving this dish “every Friday until you’re sick of it.” The chipping forecast has predicted that might be a while yet, but catch it while you can. Vicky Andrews 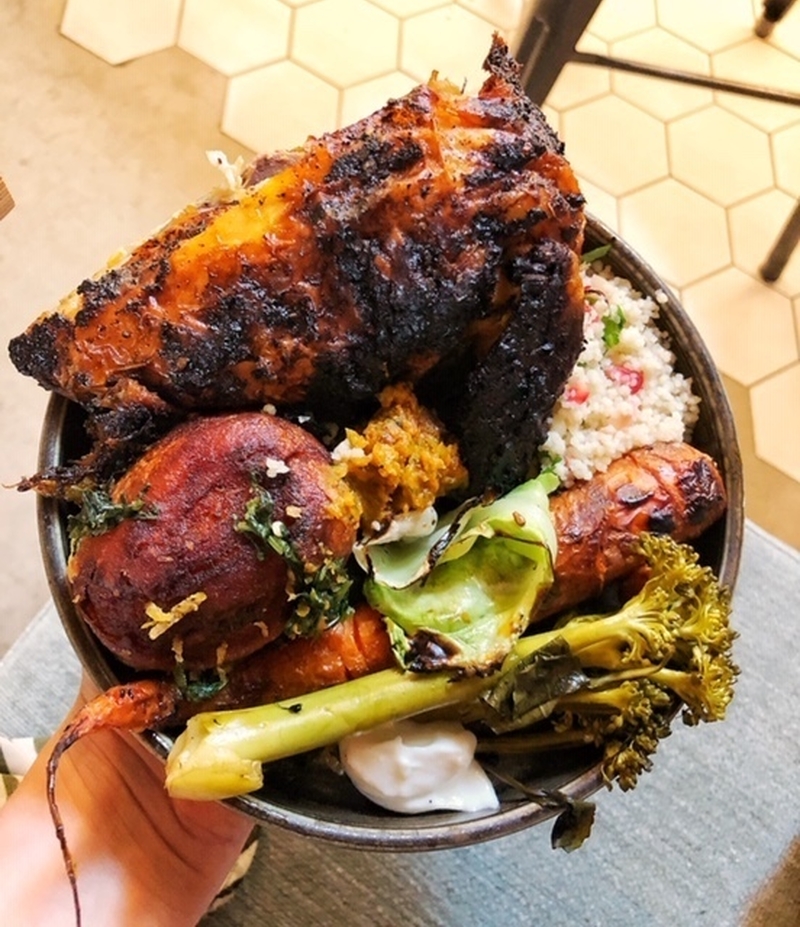 Alas, autumn is here, and in my book that means it’s roast dinner season. I’ve eaten a lot of roast dinners in my time and as much as I adore the steadfast adherence to the tried and tested trimmings I think I’ve found my new favourite version of Britain’s most iconic dish and it ain’t at all traditional.

Lark Lane’s coolest residents - and the guilty party behind Liverpool’s halloumi fries obsession - Hafla Hafla have decided to give the roast dinner a touch of Middle-Eastern magic with their new Sunday sharing feasts.

Roasties are hit with a heavy hand of chilli, coriander and lemon. Whole roasted carrots and parsnips come swimming in harissa butter and spiced meat is piled in mountainous heaps alongside tahini mashed swede, pomegranate speckled cous cous and a huge charred half of hispi cabbage. There’s a pick ‘n’ mix of Lebanese sauces, jams and gravies to drizzle and dunk all over your dinner and veggies can swap the meat for a decent substitute of a whole baked, spiced celeriac. Rebecca Fry 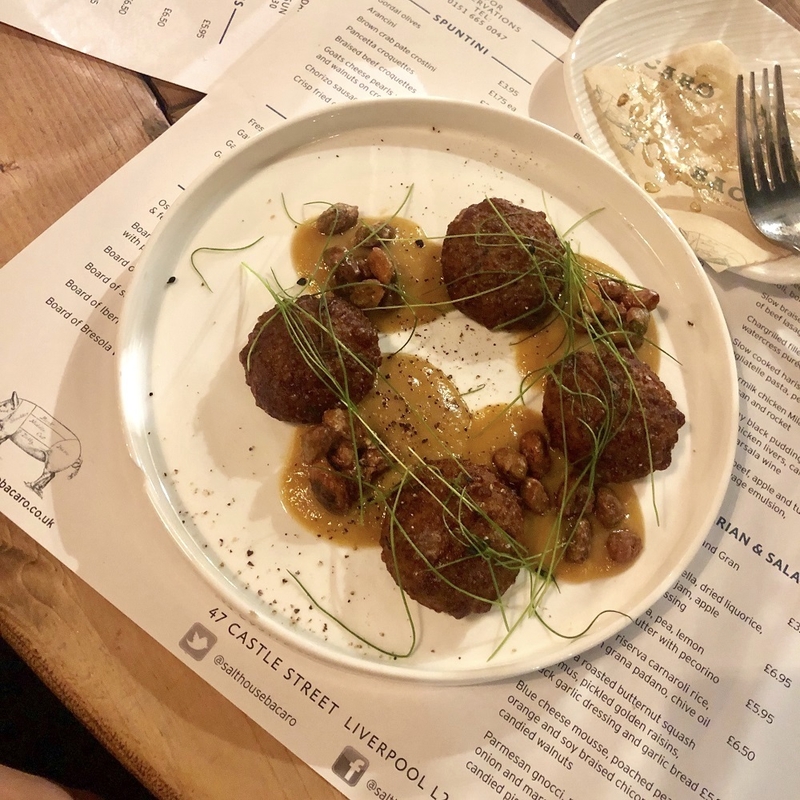 When I entered the month, I didn’t realise that the road ahead was paved with doughy pillows of gnocchi. I went to Croatia for five days and ate six separate portions of the stuff (you do the maths) and yet one of the most memorable plates of gnocchi happened back home, at Salthouse Bacaro.

We all know that Salthouse Bacaro is the king of small plates, but the parmesan gnocchi I ate there last week really was something else: four sizeable spheres of steaming hot gnocchi on top of a puddle of golden puree, sprinkled with clusters of sugary pistachios and crowned with a delicate nest of pretty green tendrils.

The gnocchi are soft on the inside and crispy on the exterior. The onion & Marmite puree is rich and indulgent – never mind pure genius – and not too heavy on the Marmite for the haters out there. The candied pistachios are just the crunch you need to balance the textural equilibrium. What a knockout. Certainly not one to be missed. Stephanie Whalley 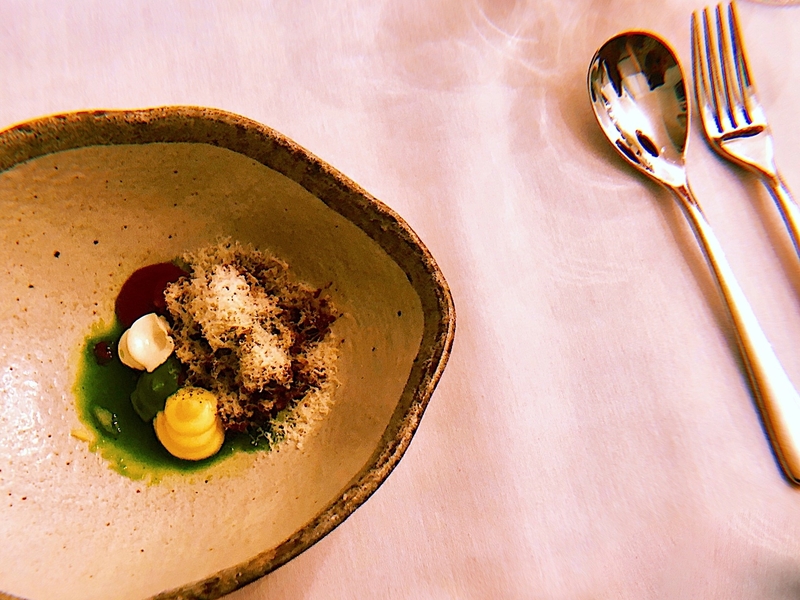 I finally got the chance to eat at Anton Piotrowski’s Hope Street venture, Röski. I had high expectations, all of which were met – if not surpassed – the unlikely star of the eight-course menu being the wonderfully surprising red cabbage Bolognese.

It didn’t look like your typical Bolognese, but it certainly tasted like it. Close your eyes and you’ll be convinced that you’re eating a meaty ragu: but what you’re really tucking into is some finely chopped, stewed cabbage in a rich tomato sauce, topped with a dollop of Parmesan custard (don’t knock it ‘till you’ve tried it) and a green herb puree.

Everything about it had me fooled and I inhaled it in about 30 seconds – it’s a tiny tasting course portion after all – and I’ll never look at a Bolognese the same way again. If you’ve got a special occasion coming up, get yourself down there. Even the most serious carnivores will be converted. Megan Walsh