THE bright red coloured Liverpool Bar Lightship, the last of its type in the country, is tethered and led on a lonely journey along the Crosby channel. Destination south, future unknown.

For nine years The Planet, to give it its proper name, has been a popular attraction at Canning Half Tide Dock, with owner Alan Roberts utilising the space as a cafe and bar while he nursed plans to turn it into a floating hotel.

But a row, essentially over mooring fees, has culminated in the historic vessel being seized by bailiffs and towed hundreds of miles away on a one way voyage to Sharpness, near Bristol.

I can think of only one place where such an act could happen, and sadly that is Liverpool, a city that won its World Heritage Site status from Unesco on the back of its rich maritime history

They’ll say every effort was made to resolve the dispute between Roberts and the Canal & River Trust, which manages the UK's waterways, but, at the end of the day, the Liverpool maritime heritage is poorer for allowing one of its most defining features to be lost in this way.

There are few views in Britain to match the Mersey docks system when it is lined with ships - sailing ships with their wooden masts as well as more recent additions to Liverpool’s maritime history like the Planet.

A city that can spend millions bringing business people to show off its waterfront - and millions more manning a stall in Shanghai - can allow such a loss to happen. It’s virtually an act of piracy on the low seas.

Yesterday the waterways people said they had no choice but to seize the ship, which was being used as a cafe bar, because it did not have a licence to be in the dock, nor to trade.

Chantelle "Seaborn",  of the Canal & River Trust, said in a statement: “I’m sorry that we’ve had to seize Planet Bar Lightship and prepare it for removal from Canning Dock. It’s not been an easy decision to make.

“Our attempts to resolve issues with the owner around safety breaches and non-payment of monies have not been successful.

“Since January 2015 the vessel has not been licensed to be in the dock nor to trade, but the owner has continued to operate and serve alcohol to members of the public."

Tourists don’t flock to the Albert Dock to view narrowboats that look like floating Dinky toys against the towering warehouses, the largest group of Grade I listed buildings in the UK. A violinist on the quayside plays The Leaving of Liverpool. Picture: Hugh Thompson 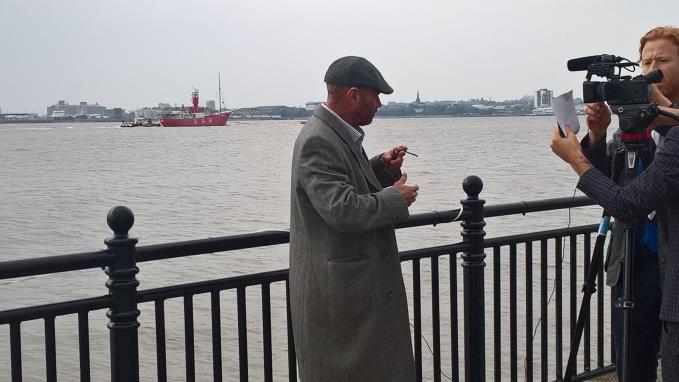 Alan Roberts gives up and turns to  face the media. Picture: Hugh Thompson

They want to see proper ships that have ventured and adventured across the oceans and seas with a story to tell.

Alan Roberts is, without doubt, a character, a bit of a Captain Jack Sparrow, reminiscent of the late Liverpool publican John Meakin, even, but he invested a lot of his own money to keep Planet no 23 at the waterfront.

Yesterday as bailiffs cast off the the 58-year-old vessel from its moorings and tethered it to the towing vessel Ingus, he seemed lost and desperate. Dressed in a smart three piece suit, arms held high, he perched at the end of the jetty, threatening to jump into the grey waters (he didn't or this would be a very different account), while imploring bailiffs to stop as his ship began to move.

It’s likely the cost of seizng the vessel and towing it along the Irish Sea to Bristol over the next few days will far exceed what is said to be owed.

I can think of only one place where such an act could happen, and sadly that is Liverpool, a city that won its World Heritage Site status from Unesco on the back of its rich maritime history.

Then again, it is hardly surprising. Liverpool is one of the few WHS sites in the world on Unesco’s "at risk" register, with a veiled threat that one day the accolade, like the lightship, could be swept away.

In the past Liverpool, as a bustling sea port, thrived and no doubt had its fair share of buccaneers, jack-the-lads and even its pirates, all weaving into the tapestry of the city it became.

The authorities in Liverpool should have thrown a lifebelt to the old lightship, not for the sake of Alan Roberts, but because it was a priceless piece of the city’s maritime heart and soul.

It was the last in a line of lightships that for decades helped mariners navigating the stormy waters of the Irish Sea to the safety of port. And now it has gone for good. 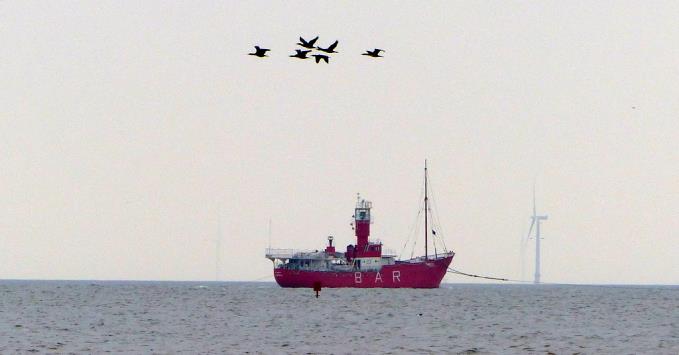