BITCH Juice. It's perhaps not a cocktail that will endear them with the staff of the nearest radical bookshop. Yet in the very short time they've been in town, Almost Famous Burgers reckon they have made quite a few friends among the neighbours.

The filthy burger concept, which last year took Manchester by storm before going belly up in a chip pan fire, opened in Liverpool by the skin of its teeth, last night, in a disused garage in Parr Street.

It's an arrival so hotly anticipated by lovers of dude food that, in the end, only the true hardcore knew about it. 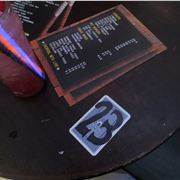 Thus, just three hours before the notional ribbon cutting yesterday, Liverpool Confidential found itself negotiating a scaffolding rig, bare wires dangling from ceilings and sacks of onions before it cornered founder Beau Myers sitting on a crate outside.

“I've stopped worrying now,” he said, surveying furniture still stacked in the street and a grill only recently prised from polystyrene. Never switched on, who knew if it even worked?

No soft launches for this lot, and, like KC and the Sunshine Band, that's the way they like it.

Indeed, Almost Famous states “no press, no photography, no bloggers no blaggers” on its website. It needn't have worried, that particular mob was larging it at the opening of the pleasant-looking Brown's Brasserie in Liverpool One with all the paps outside.

On the upside, lack of PR and celebs at your party ultimately means lower prices for the paying punter. And when you've got Hendrix and The Doors blasting out as you sip your “BIG FUCK OFF STRAWBERRY DAIQUIRI” who cares? 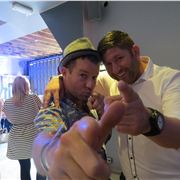 NuttersTo give you an idea of how popular Almost Famous was/is in Manchester, people would queue for hours outside the anonymous doorway of its Northern Quarter converted office premises. Thus, last night, AFB managed to fill coaches full of their own crowd.

It's telling that rather that rent them, they got them to cough up £25 tickets to ride. Larger than life trilby-sporting chef Andrew Nutter led the victory parade into Liverpool from Albert Square.

Was it because they were afraid nobody would come from here?

“No,” says Myers, shaking his head. “People were genuinely so put out when the Manchester place burned down I do believe they suffered a kind of withdrawal. They loved the food, they loved the whole ethos – and they are willing to travel.” 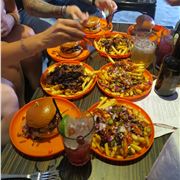 Big and messy“Ah,” says a chap at the next table tucking into a plate of Trailer Trash Fries”. “That will be a Miami Nice you're drinking.” He nods knowledgeably. “Have you tried a Jack and Smack milkshake yet?”

Myers, who does not employ design companies or branding outfits (“we make it all up when we're drinking”) likes his chaos and frisson, however engineered it might be. To that end Almost Famous has come to the right city.

He says he and his team have been bowled over by Liverpool. “I can't get over how different it is from anywhere else,” he says. “The people here are really up for being out for the night and going for it, full on, big time, serious, dressed up and organised. 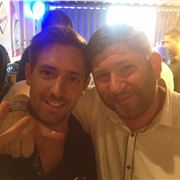 Beau Myers and our
own Alan TownleyIt's way more fun. And for us, and the way we operate, it makes it even more exciting.”

He may change his mind come 3am on a Sunday morning, I tell him, but helped to navigate the lie of the land by neighbours Salt Dog Slims, Santa Chupito's/Aloha and new pals forged at Peacock and Lucha Libre, it's unlikely they will remain innocents abroad for long.

It's no accident that pictures are hung ever so slightly off kilter in this pop-up which will close temporarily in four weeks time while they kit out a classier, 120-cover restaurant with booths, two-way mirrors and secret rooms. 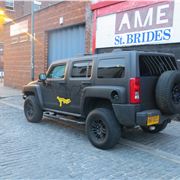 The burger vanSomeone from Liverpool Confidential will back to review it only then and when the new chef Mick Kennedy, currently the sous, is given free rein.

But early indications, from what we sampled last night, are very good (one of our number said the River Phoenix was the best burger she'd ever eaten) as the entire kitchen roll we used up will testify.

In the meantime, they are open for business from tonight serving just three kinds of massive burger ranging from just £6-£8 and Thurs-Sat after.

It's going to get messy, very messy. Now open wide.