All My Loving: Paul McCartney gives thumbs up to St Luke's campaign

A CAMPAIGN to keep St Luke's church in use as a cultural venue for the Liverpool community has received Beatle backing.

Sir Paul McCartney today joined John Lennnon's widow, Yoko Ono, in calling for the bombed out church, on Leece Street, to remain open "for the use of the people and run by the people" and praised the work carried out there.

A huge question mark has hung over the future of the church since March this year when Mayor Joe Anderson announced his intention to sell it for £1 and invited expressions of interest from bidders.

Developer Lawrence Kenwright, who owns the Signature Living apartments and the newly-opened 30 James Street hotel in the former White Star builidng, quickly stepped in with a plans to turn the church, which was bombed by the Luftwaffe in World War II, into a wedding hotel and venue.

The move caused a public outcry and was then dropped. Mayor Anderson later performed a U-turn, announcing that the church would, in fact, remain in council ownership. Nevertheless, its fate, who will be its long term caretaker and what it will be used for are far from sealed. An estimated £450,000 is needed to shore up the weather-weakened interior. Mayor Anderson has committed £150,000 towards those costs.

Ambrose Reynolds, who has been caretaking and programming arts and communtiy activities in the church for the past seven years, has, with a group of volunteers, raised £20,000 via Crowdfunder, to help with the costs of keeping it tick over as is. 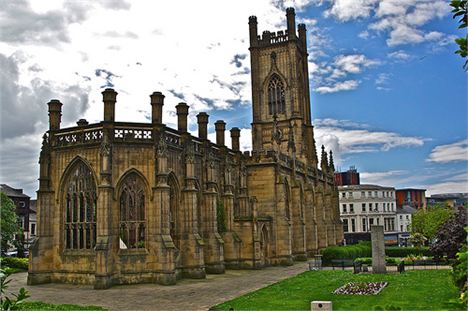 He says dance music promoters Club Freeze were so impressed with the venue, after a recent event there, that they contacted McCartney to let him know what is going on in his home town.

Today the former Beatle posted this statement on his website:  "St Luke’s church, better known as The Bombed-out church to the people of Liverpool, is a place that encourages people to express themselves.

"The people of Liverpool should do everything possible to keep this venue open for the use of the people and run by the people.

"It is a place that is regularly staffed by students from LIPA and everyday people of all ages, religions and backgrounds. It would be a terrible shame if we lost this cultural icon"

Reynolds said he was thrilled his campaign had received the songwriter"s endorsement.

“It means the world for us to have the support of this international legend the tremendous support we have received from the public means that we can continue to open the church for music, theatre, art exhibitions and outdoor movie screenings.”