Liverpool stands shoulder to shoulder with Manchester after terror attack

PEOPLE and organisations across Liverpool were showing their solidarity with Manchester today in the wake of Monday night’s terror at the city’s arena which killed 22 people and injured 59 more.

Liverpool Mayor Joe Anderson spoke of the bonds that existed between the two cities and told the public to remain vigilant and report anything suspicious to the police.

He pointed to a number of high profile events taking place over the coming summer months, - Sound City, LIMF, Africa Oye and the Fusion Festival perhaps among them - and said he would be meeting with council officials and other agencies to discuss how to respond and learn from the attack.

Much of Liverpool woke up in shock to the news of the suicide bomb attack and ordinary citizens around Merseyside were quick to show support for their cousins up the East Lancs with their own tributes, both in the virtual world of social media and practically, making banners and lighting candles at key sites around the city centre.

Maggie Clarke and her daughter, Andrea Lightfoot, were typical, travelling on the train from Wirral with a large, homemade banner which read, simply: "Liverpool supports Manchester".

Fixed between two pillars on St George's Hall,  they sat to its side, as candles flickered barely visible in the impossibly dazzling sunshine. At one point they were joined by Ste, a railway worker on his break who had found time to buy a packet of tea lights which he then lit in a row, before pondering the moment and then heading back to his job at Lime Street Station.

Andrea said: "We felt we had to do something, to show solidarity with our neighbours in Manchester. That's all. We want them to know we are with them every step of the way."

Her mother added: "Those poor children. You know how excited kids get when they get to go to something like that. They must have been so happy, wearing their T shirts... and then not to come home." She lowered her head. "I feel like crying."

Councillor Roz Gladden, whose year long stint as Lord Mayor comes to an end this week,  said: “On this dark, dreadful day, all of our thoughts are with those affected by this appalling terror attack.

“Innocent people, many of them young, have lost their lives. It defies belief as to why anyone would do this and I am sure many, like me, are struggling to comprehend it.”

Referring to the book of condolence she added: “We are determined to show that we stand in solidarity with those affected and that they are in our thoughts and prayers.”

Liverpool Town Hall, St George’s Hall and Cunard Building will be bathed in red, white and blue lights tonight as a mark of solidarity and a letter of condolence is being sent from Cllr Gladden to the Lord Mayor of Manchester.

A minute’s silence is also due to be held at the start of the council meeting on Wednesday night.

The daughters of Liverpool City Region Metro Mayor Steve Rotheram were among the tens of thousands who attended the concert by Ariana Grande. They escaped injury and were returned safely home by a Liverpool Alpha Taxis driver who made the  40 mile journey, along with scores of others from the city, up the M62 to help ferry people home for free. 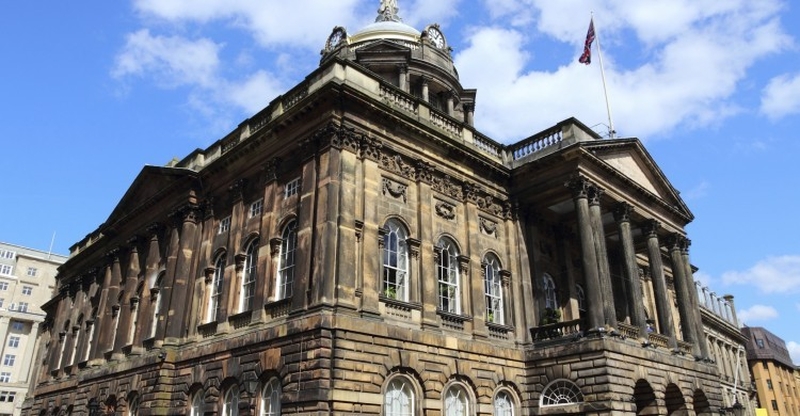 City Mayor Joe Anderson said: “Today we are reminded of the evil that can exist within our midst, when peaceful ordinary people are targeted in such a vile and cowardly way. Of course, we struggle to find the appropriate words to say. There are none that exist to express our mixed feelings of revulsion and grief.

“The bonds that tie Liverpool and Manchester together are strong. Many from Liverpool were at the concert last night, and have come home with memories nobody should ever have to experience. Our thoughts and prayers will go to everyone there last night, with the families of the bereaved, those still searching for their loved ones, and those now in hospital receiving treatment.

“We also pay tribute, alongside those of our emergency services, to those who helped by opening their doors, their homes, their businesses without a second thought. They are the proof that there is compassion, humanity and hope.”

He added: “I will be meeting with agencies and City Council staff later today to talk about how we respond and learn from these horrific events, within our city and at the many events we have planned for the summer. I echo the advice of Chief Constable Andy Cooke to remain vigilant and report anything you see as suspicious to the police. We all have a part to play in keeping each other safe, in partnership with the police.

“Today Liverpool has sent our condolences and lowered our flags as a gesture of solidarity. There can be no place for hate in our society. Manchester has bravely vowed to carry on as a single community and we will share in that aim. Shoulder to shoulder our communities will reject violence and those that espouse it, and in absolute solidarity stand with our friends, brothers and sisters in the great city of Manchester.”

People will be able to sign the book at the Town Hall at the following times: