Kensington is about to get the best thing since sliced bread

BAKER Owen McShane is setting up shop in Liverpool with the aim of delivering luxury loaves from the grip of the middle classes and into the mouths of the masses.

That is to say the combined populations of L6 and L7, which roughly equates to Kensington, Fairfield and a bit of Edge Hill.

To date, the fightback against factory bread, by small scale, so-called artisan bakers, has benefited only the hipsters and higher earners.

Why does it have to be the province of people with quite a high level of disposable income?

A sourdough loaf, and that’s what we’re talking here, retails in Liverpool city centre for around £3.50. In some parts of London you can pretty well double that.

McShane has found a way to sell the same bread at a price allowing many more to enjoy a bite of special stuff that the baking giants will never match.

Customers at the newly-formed Kensington Bread Company’s Holt Road store, opening next Thursday (May 18), will be charged £1.50 for any one of five varieties of sourdough on production of the “Kenny Card”, which will provide proof of residence and entitlement to the low end of the pricing scale.

Public service workers will pay the middle rate of £2, in recognition, says McShane, of their contribution to society, rising to £2.50 for everybody else, with the hope that they will regard the higher price less as a surcharge, more as a charitable contribution to a valuable social enterprise.

Sourdough baking is unsuited to the economics of the assembly line and the price being offered by McShane to the residents of L6 and L7 is made possible only by pouring the profits from his existing wholesale business (customers include Cuthbert’s Bakehouse and The Climbing Hangar) into the not-for-profit Kensington outlet.

“It can’t be wholly reliant on bread sales through the front door, there needs to be a commercial driver,” says McShane. “There will be a symbiotic relationship between the two businesses.”

Even £1.50 will be too much for some. Here is the challenge: at the supermarket up the road, you can purchase a loaf for as little as 45p. McShane is also dealing with a taste and a habit, acquired over generations, for the sliced white (one of my own teenagers frequently expresses a preference for what he calls “sh*tey white”).

McShane has addressed one of those issues already, by investing in a 1950s bread slicer, with 15,000 loaves on the clock already. “It’s like something from the industrial revolution, it’s old school and that’s why I like it.” 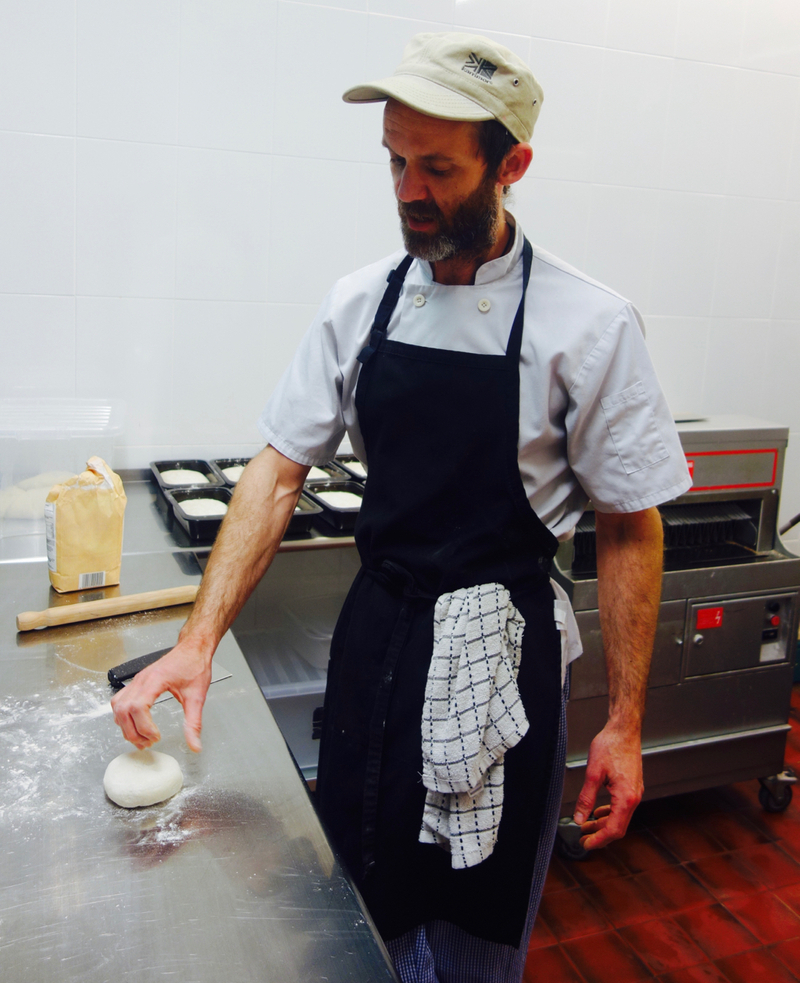 The demand for bread in a bag off a supermarket shelf might be easier to answer if people knew exactly what they were getting. Digestive problems like irritable bowel syndrome and coeliac have been linked to mass-produced bread and people switching from supermarket to sourdough report feeling less bloated.

Much of the bread bought in the UK is bleached, blanched and denuded of nutrients, and contains a cocktail of added ingredients including extra yeast, extra gluten, fat, sugar, reducing agents, emulsifiers, preservatives and any number of enzymes or “processing aids” which do not even appear on the label and which as far back as 1974 had British bread being described as “the most chemically treated in western Europe”.

Soudough is more than just a fad or a measure of status. Honest and unadulterated, and blessed with a singular character, it’s been around since humans are first thought to have witnessed the miracle of the yeast, some three and a half thousand years ago.

“Sourdough,” says McShane, “has only three ingredients – flour, water, and salt. It’s pure and simple. If people want to see how their bread is made all they have to do is look through the window, come in and smell it.”

In many ways McShane’s 40 years on the planet have been leading to the creation of the Kensington Bread Company; from a childhood spent on a Pembrokeshire farm where everything in the kitchen (“the jam on our toast, the chutney on our cheese sandwich”) was made from scratch, to overseas development work in Kenya and Tanzania, and a career in education back on Merseyside.

“Since about the age of 12, I have been interested in the making of food, the taste and flavour.

“I began baking bread about seven years ago. I was at home one day at a loose end and thought ‘what can I do with myself?’ There were flour and yeast in the cupboard and I thought, ‘I know, I’ll make some bread. It was terrible, but I just thought I’ve got to do it again and make it better.”

McShane worked at it, obsessed over it, perfected it to the point where “friends would all say ‘that’s lovely, you should be selling it’.

“And all the time I was thinking, ‘it’s a really nice product, why can’t everyone enjoy it? Why does it have to be the province of people with quite a high level of disposable income?’

“When I eventually took that leap of faith, I wanted the prices to reflect that, no matter what people’s background, or what area they come from.”

Other than the sourdough (white, brown, sun dried tomato, green olive and spiced fruit loaf varieties), there will be ciabatta, focaccia, flatbread and pitta. Beyond giving the baking giants a run for their money, the Kensington Bread Company will deliver ongoing community projects like bread-making classes for residents and schools, and work experience.

“That will include local kids who generally don’t get opportunities. They will be behind the counter to start with, and eventually in the kitchen. I hope to be able to train people up who can maybe branch off on their own.”

McShane chose Kensington, one of the UK’s most economically deprived districts, for his community enterprise after an association stretching back more than two decades to when he lived there while a student at Liverpool University. Later, running a student support centre in West Derby, his work brought him into contact with many young people from the area.

He looks forward to renewing their acquaintance either as customers of the bakery or out back, absorbing the ancient art.

“I’d hate to think that when I retire, the shop just closed. It would be really nice to think some young people would take it over one day and make it their own.”

The Kensington Bread Company opens on Thursday May 18 at 49 Holt Road, L7.