AT ground level, Liverpool is a wonderland of bars, cafes, restaurants and hedonistic hot spots; you don’t need us to tell you that. Above and below though, it’s arguably even better – some of the city’s most spectacular food and drink experiences can be found underground, in basements beneath the throngs of modern life, or upstairs, in secret roof spaces.

In fact, when you look closer, there are nooks and crannies all over the place – high as well as low – which have been plugged with a whole host of must-go clandestine establishments. The city has become a scavenger hunt of hidden gems and well-kept secrets which – shhh – we’re here to uncover. Here are some of our favourite hidey holes so you can put some pins on your map, off the beaten track. Just keep them to yourselves… 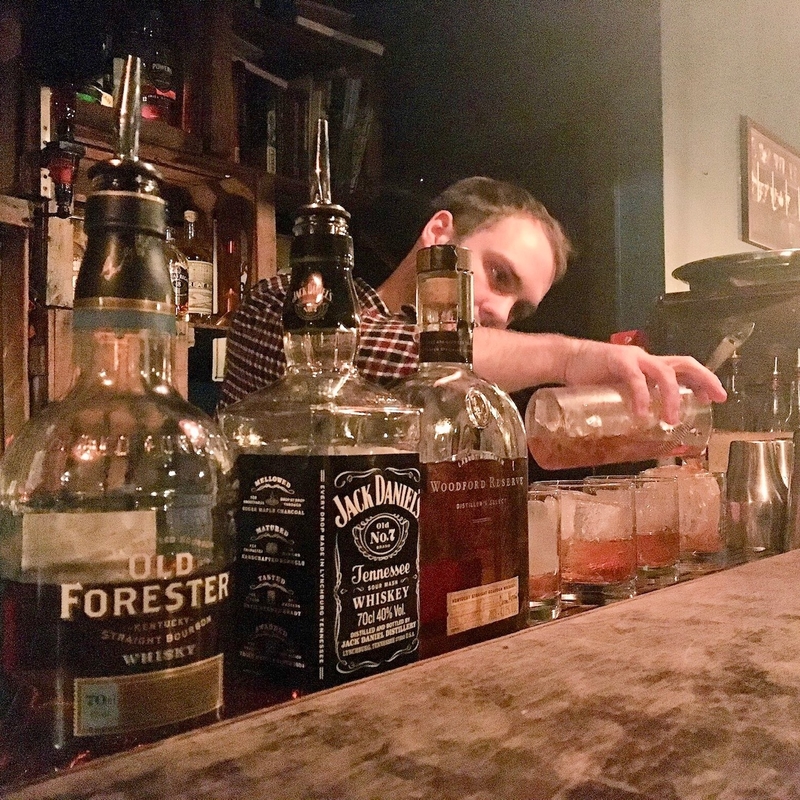 Take a stroll down Berry Street and without prior knowledge, you’d definitely miss this one. With the beautiful Bombed Out Church at one end of the street and the ornate Chinese Arch at the other, there’s no way your head would be turned by a shabby, black shop front with no signage whatsoever. Knock on the door though and you’ll unearth one of Liverpool’s most precious hidden treasures: a traditional Prohibition-style bar, lit by candlelight, filled with jazz and blues, serving classic cocktails and an impressive roster of gin and whisky. 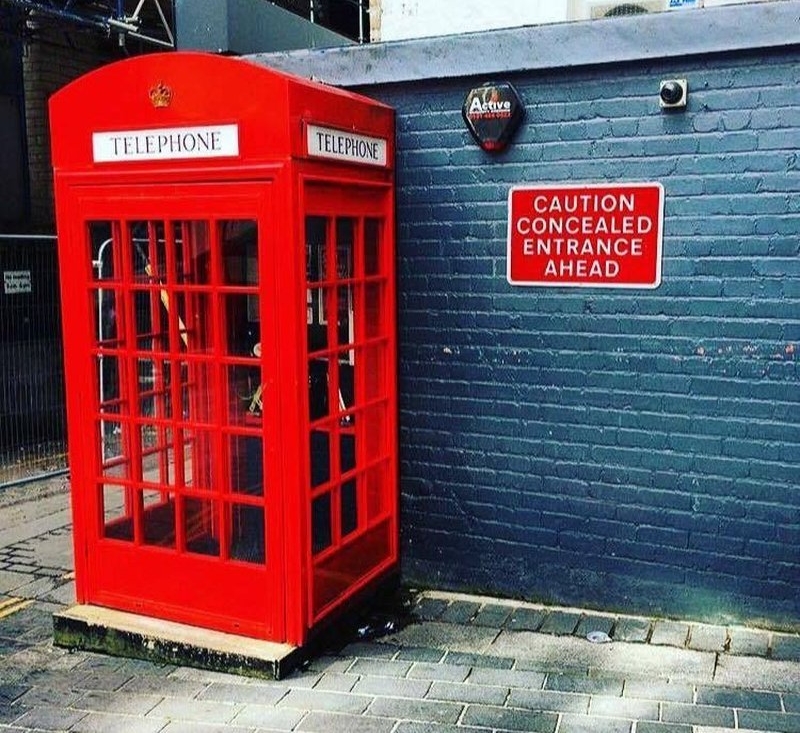 The ‘Ex’ which marks this particular spot is a quintessentially British red phonebox. Pull open the door, pick up the receiver and find yourself connected to an operator who will grant you access to a sought-after cocktail bar, hidden in plain sight. A modern speakeasy vibe marries with a repertoire of traditional cocktails and contemporary muddles, from a classic Old Fashioned through to candyfloss-crowned Insta-worthy theatrics. 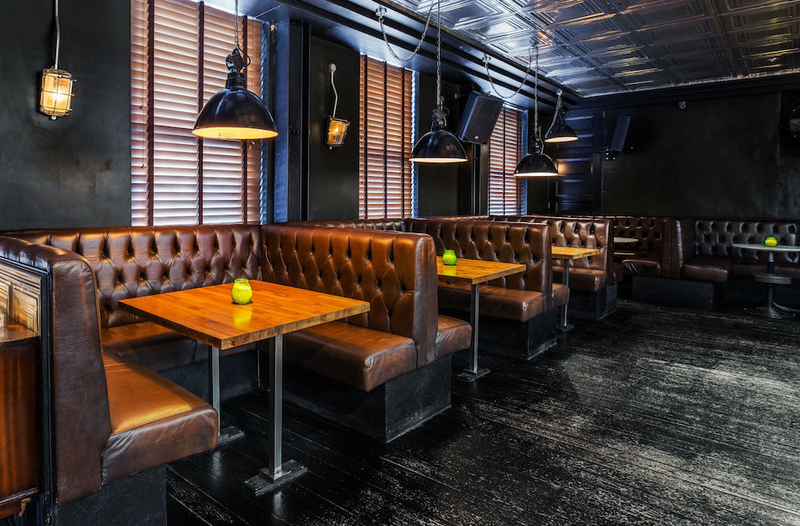 It doesn’t really get more clandestine than an inconspicuous joint on one of the city’s most thriving party streets that can only be accessed by calling a secret number. We’ll let you in on it though… call 07803 361052 (Thursday through Sunday) and you’ll be given a code for entry to this sultry little den above Salt Dog Slims. Upholstered leather booths, a caged table, a room-length bar twinkling with liquor bottles and a roster of premium cocktails give this gaff all the sex appeal of 1950s Manhattan. 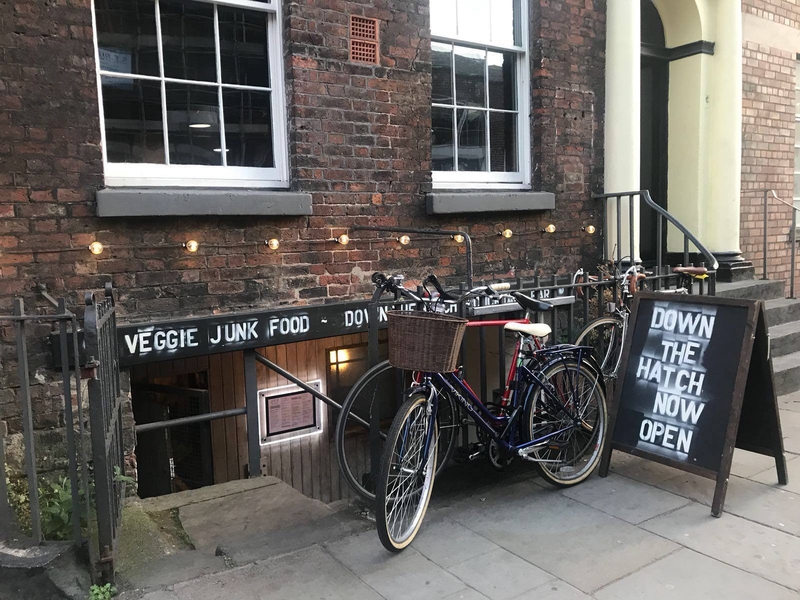 In the depths of Duke Street lies a den of vegan junk food iniquity. Dubbed Seitan’s Basement, Down The Hatch serves up a whole raft of meatless dishes which seek to provide veggies, vegans and anybody with a penchant for plant-based food with an alternative to the usual (and often pretentious) suspects. Think dirty burgers, vegan mac and cheese, ‘Broccolipops’, poutine, spicy buffalo wings and a greedy breakfast menu of loaded toasts, breakfast butties, tofu scrambles and the ‘McLovin’ soy sausage patty. 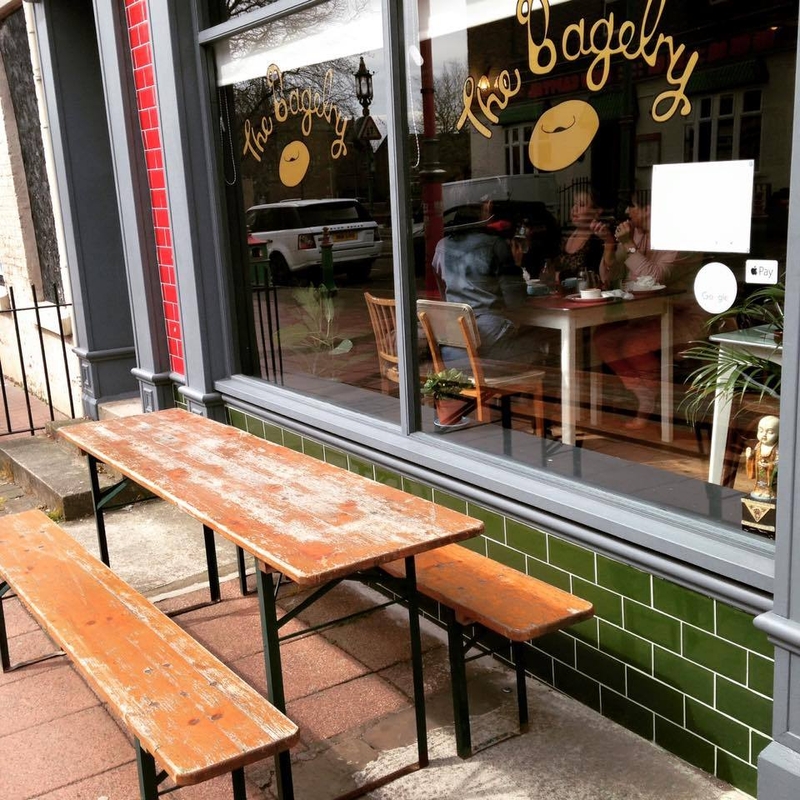 Liverpool’s beloved China Town is home to some of the most authentic Asian food in the city, naturally. What you might not know though is that it also houses a humble little cafe, distinguished only by its shiny green and red tiles. This place goes by the name of The Bagelry and, as the name suggests, it dedicates itself to celebrating your favourite spheroid carb. It’s not just Philadelphia or jam ’n’ butter here either. We’re talking Black Forest bagels, rainbow bagels, salt and pepper French toast, walnut and maple cream cheese, tofu satay on sesame… the list goes on. 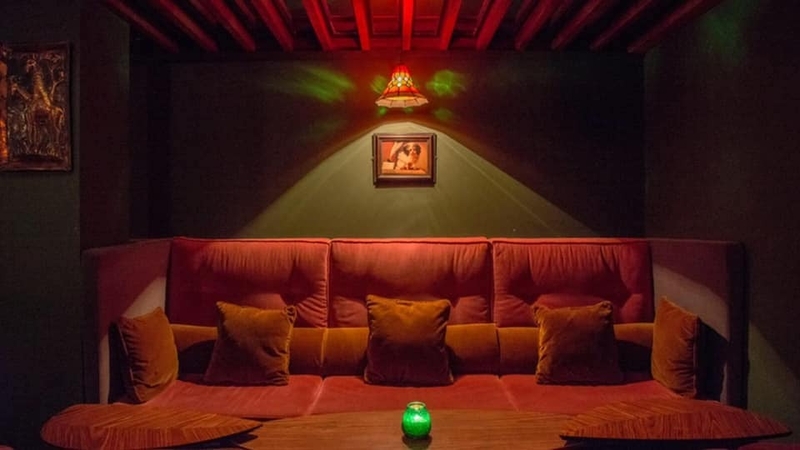 Jenny’s distinguishes itself as a ‘drinking den with a disco twist’ and, well, that’s a pretty bob-on description. Owned by the brains behind the aforementioned Berry & Rye, Jenny’s Bar is every inch as cool but you’ve got to find it first – this isn’t the kind of establishment you’ll just stumble across without meaning to. Seek out its hiding place on Fenwick Street beneath the rather unsuspecting Jenny’s Sea Food Restaurant and nestle down in all its green velvet glory. 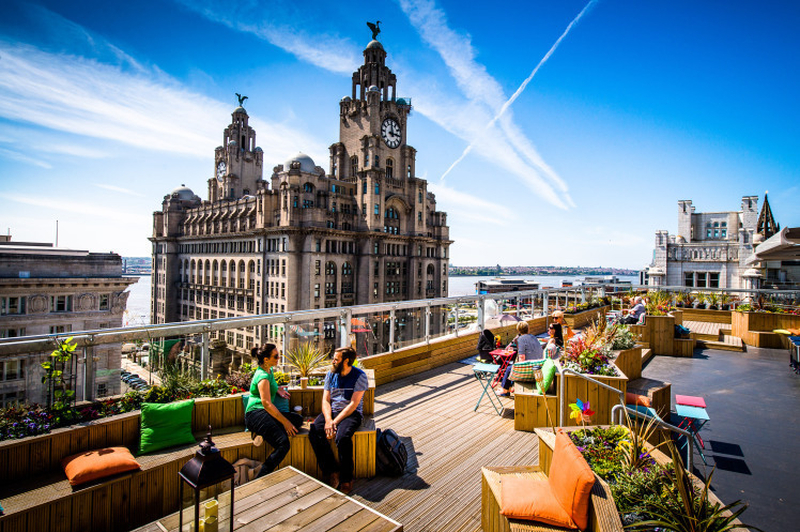 If the dictionary definition of secret is ‘something not known or seen by others’, then this one has to be the worst-kept one for sure. On the rooftop of Oh Me Oh My, the Goodness Gracious Roof Garden offers unrivalled views of Liverpool’s glorious waterfront. Oh, and a menu of wines, cocktails, finger sandwiches, cakes and vegan ice creams. It’s only open March to October – weather permitting – though get past the ifs and buts, and this one is well worth the visit. Quirky but classy. 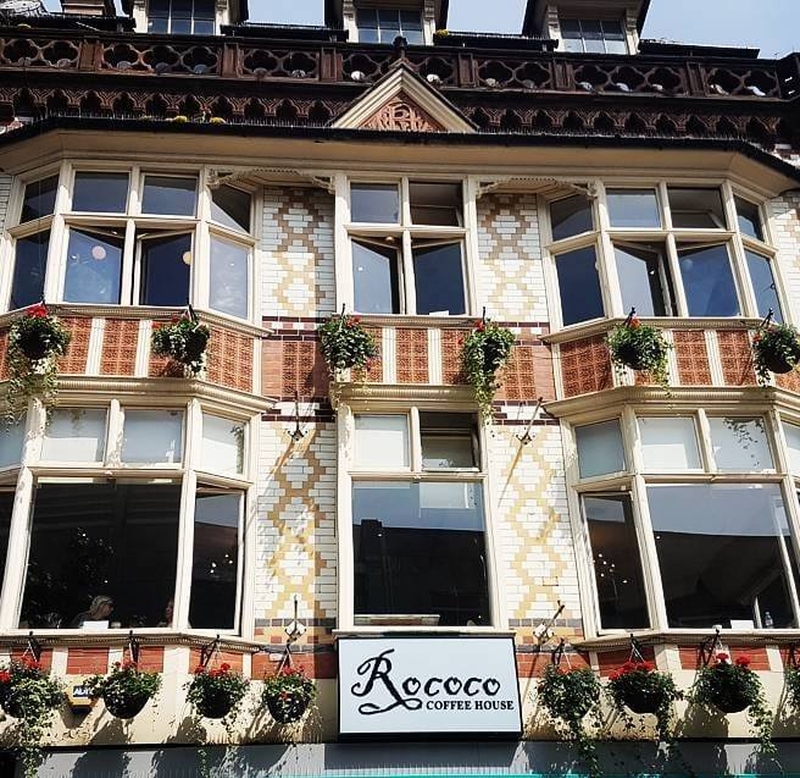 Rococo Coffee House has been around for over a decade now – opening back when the Liverpool independent scene was nothing much more than a few family-run cafes and small restaurants – but it remains a local treasure today. Ascend from the hustle and bustle of the central shopping district into a true home-from-home where the ongoing mission is to ‘save Liverpool from corporate coffee’. Open fires, corridors with nooks to nestle in, big squashy sofas to land on with a book, and a cafe-style menu of homemade treats. It doesn’t get much cosier than Rococo. 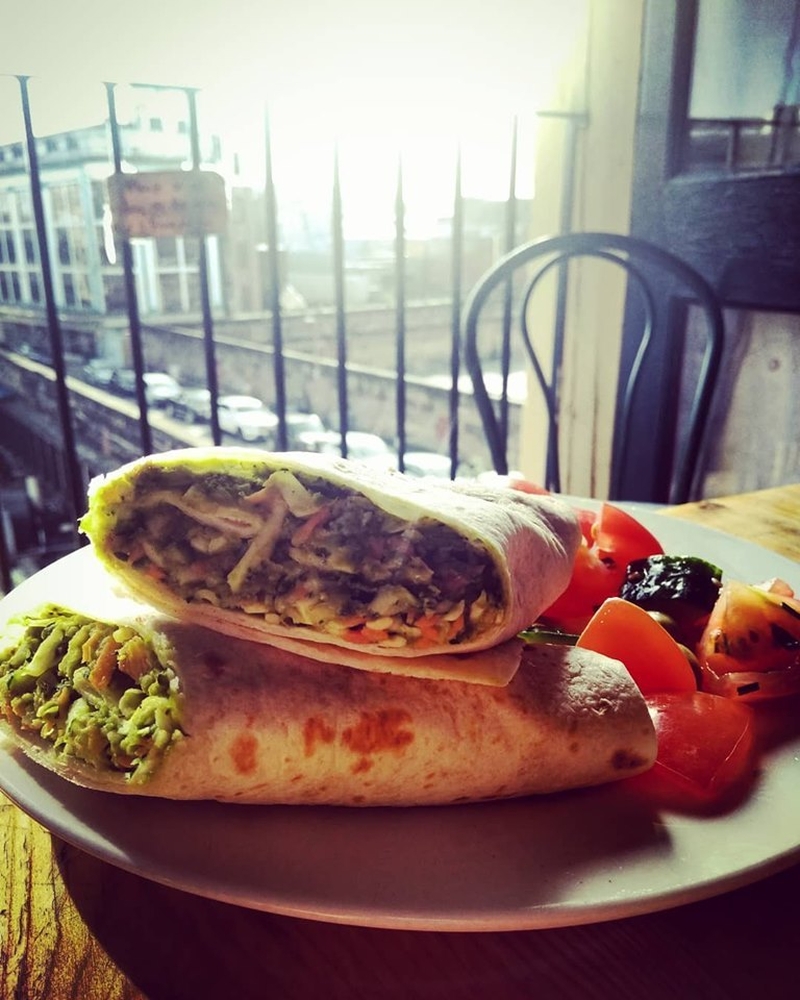 Go off the beaten track of Bold Street, down Newington and you’ll come across a doorway that’s a bright aubergine purple and embellished with hand-painted ivy. Cross the threshold and climb the ramshackle staircase into the loft of this small but mighty listed building. At the top, you’ll find the home of what can only be described as the pioneer of vegetarian dining in Liverpool. Mismatched furniture, walls decorated with local art, a bohemian clientele, a BYOB drink policy and a menu of rustic fare are what make The Egg so irresistibly charming. 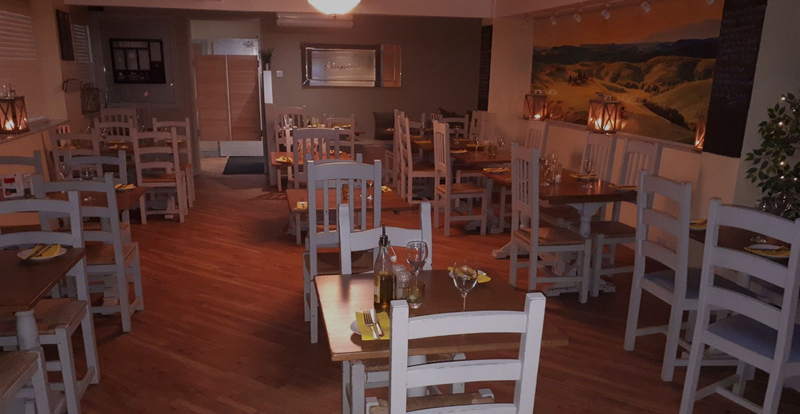 This particular leg of the treasure hunt requires a little more stamina than the rest. Well, at least enough stamina to endure a 20-minute taxi ride with an Uber driver who might be wondering why on earth you’ve asked them to take you to a closed-down petrol station on the outskirts of the city centre. Should you be questioned, tell them you’re on your way for an authentic Italian feast at Flavio’s to take your pick from a hearty menu of pastas, pizzas, risottos, seafood and steaks. The petrol station exterior remains unchanged, but inside is an intimate Italian cafe which has quite the glowing reception on TripAdvisor.

If you have a favourite Liverpool hidden food and booze gem, then let us know below...