Fried chicken comes with more baggage than possibly any other food in the world. A secret blend of racial, political, and socio-economic context dating back hundreds of years.

To black women freed from slavery by the Emancipation Proclamation of 1863, selling chicken at markets and train stations offered economic liberation. As it spread through white communities, these womens’ contributions were not only erased, but African Americans’ bond with fried chicken became a racist stereotype; stigmatising their cultural heritage to the point where, to this day, some African Americans still refuse to eat fried chicken in public.

In the UK, neighbourhood chicken shops provide a vital third place for young people in working class communities where traditional hubs have been depredated by austerity. For first and second generation Muslims and POC, they’re a safe space which also provides that elusive something-their-parents-didn’t-have. Cultural assimilation, chips and a Mirinda for £1.99.

If you need an illustration of the importance and value of chicken shops, know that no Maitre d’ or master sommelier in the entire hospitality industry commands the same respect from their customers as bossman or uncle.

Despite its historical connotations, fried chicken doesn’t need to be put on a pedestal or treated with hushed reverence, it just deserves to be treated with dignity.

Featuring most of the menu inside a bun, the “Massive Cock” enjoys infinite comedic mileage thanks to a serendipitous quirk of the English language; you see, “Massive Cock” can also mean “Large Penis”. Ha ha ha ha ha.

“Do you know what you’d like to order?” asks our server. Do I ever; as if I could resist the lure. The atmosphere in the room is palpable as I draw breath. “Oh yes. I would like…a Massive Cock”.

Silence sweeps the room, then the sound of dropped cutlery clattering on plates. A prudish Mother cups her child’s ears with her hands. The server is flabbergasted, she’s never heard anything like it. But I’ve prepared a killer blow (blow!! Ha ha ha ha ha);

A slow, solitary lap builds to rapturous applause. I’m suddenly hoisted onto the shoulders of a gang of comedy-lovers who parade me around the restaurant. Fireworks go off in the distance. I am a legend. In this moment, I am infinite.

Side-note: it turns out if you roll your eyes hard enough while simultaneously groaning, you can black-out, hit your head, and start hallucinating. And if there’s something that’ll make you roll your eyes back in your head and groan, it’s a Mas...No, I won’t give them the satisfaction.

Regaining consciousness, I wonder if I’m in a chicken shop at all: no fluorescent strip lighting, chipped red lacquered counters and tables bolted to the floor. We’re not in Kansas Fried Chicken any more. The place looks like the kind of upmarket AirBNB you wouldn’t be able to resist bragging about booking - all exposed brickwork, shelves heaving with coffee table books and cacti in pastel pots, a Smeg fridge full of craft beers, and a wine list that ranges from “Good” to “Better” to “Best.”

Maintaining a venue of this size requires a broad appeal, which explains why the menu is about four times too long for a restaurant that serves one type of food, and there’s inevitably highs and lows.

The ill-advised Bao Bun Box (£14) sees three Taiwanese buns with the texture of makeup sponges smother perfectly good chicken tenders. The tenders on their own (£7) however, are a must for anybody who finishes every night out by pleading with their Uber driver to stop at the drive through for some Chicken Selects.

As an interlude, salads of slippery Bang Bang Cucumber (£3.50) in soy, sesame, and ginger dressing, and the wedge/waldorf mash-up Baby Blue (£4) with blue cheese, crispy bacon and red grapes provide a welcome breather from the procession of deep fried everything, but let’s get back to business.

Aside from the claggy onion-and-chicken-bhaji (mis-labeled on the menu as Gunpowder Chicken - £4) the sides would be available on the NHS as a hangover cure in a perfect world. We’re upsold Loaded Tatties (£4.50) which are inelegant and make me loathe myself for not being able to resist.

We’re also persuaded to add an order of “Not Chicken Nuggets” (£4.50) which are halloumi bits fried in a crispy coating of pure serotonin. Spicy sweetcorn fritters in a gochujang sauce almost justify having to say the word “Amaizeballs” (£3.50).

It’s always going to come down to the chicken though, which is mixed. Salt & Pepper Drumsticks (£7 for 5) are so soggy they slither off the bone, which is perhaps down to being saturated in soy sauce. Wings (£6 for 5) are much better - bright white steaming flesh with crispy skin clinging to its contours, like a leather mask to the face of a disgraced MP in a dungeon in Soho.

The thing is though, fried chicken doesn’t need to be “elevated”. And while spiel for the servers to be able to talk about their buttermilk brine and provenance (although realistically, it’s to justify the prices) I can’t imagine a scenario where I’d walk past Chicken Village to get here again. When the platonic ideal of chicken is available from New Briggate - priced at £3.99 for twelve wings - why cross the road? 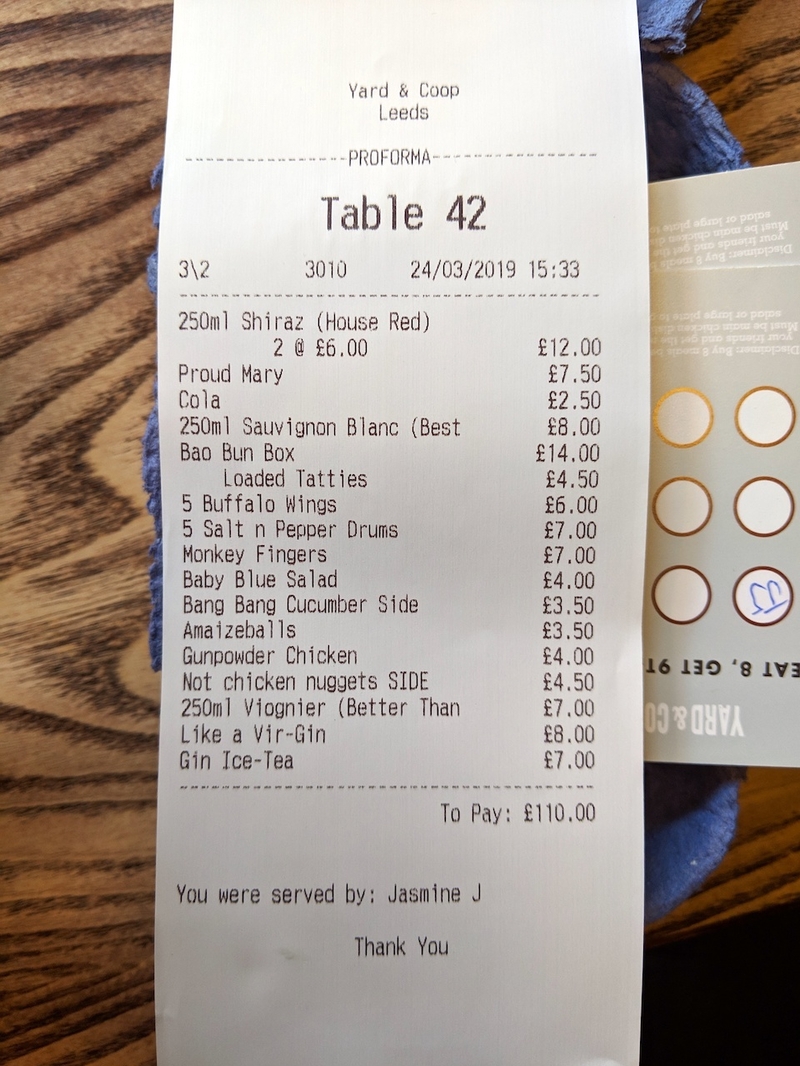