I’VE heard rumour of this suburban gem, where you eat chickpeas with your hands and get serenaded with popcorn. It’s vegan friendly, BYOB, hot on TripAdvisor, and it’s in Harehills. It’s one of those places that when you mention it, everyone says how highly they’ve heard it recommended, but mysteriously haven’t actually been.

Given the location, you can perhaps understand why. Several cars were keyed imaginatively on the adjacent streets, and finding the entrance to the Morrisons car park is like being a contestant on a game show. The colourful shopfront markets ‘wet spicy lamb’ and a huge burnout hole above the door distorts the lettering spelling out Abyssinia in Amharic. However, inside it’s a different story.

The waiter and owner, Abdul, is smart and welcoming, assuring us everything is homemade. The laminated menu is simply laid out: meat meals and veggie vegan meals. There’s zilzil, lega and derek tibs, an Ethiopian stew/stirfry crossover, dulet (a tripe dish) and kitfo (hand-minced beef tartare), seasoned with organic butter. If, like me, decisions aren’t your forte, just choose the Abyssinia Special (£27), where you pretty much get it all. Fifteen varieties for two people on one massively heavy silver tray.

Teff was meant to be big news in 2018. Hailed as the new quinoa, this virtually gluten-free grain, grown throughout the Horn of Africa, is apparently a health food phenomenon. Abdul explains how the fermentation process which transforms teff into injera, the bread-like sponge on which each stew is served, makes it great for digestion. It also gives it a sour, yeasty tang that takes some getting used to and the best way to describe it is…flobby.

Abdul’s advice? “Go slow.” We couldn’t imagine why we’d want to rush the experience and the injera, a bed underneath everything, is surprisingly cold and cool against the warmth of the dishes, which focus on flavour, rather than spice. There are two dahls – one a small heap of terracotta-coloured lentils, the other a scoop of vivid yellow on the pimpled injera carpet; the latter milder, a more stripped-back version, that really only says to you 'lentils'.

An oniony and saag-like spinach tastes fresh when scooped with one of the heavier meat options across the way on the sharing tray. The beef has that fantastic slow-cooked character to it, dark and smoky with a slight after-kick. The cabbage wedge pickles melt in a way that gives them real underdog odds on the ranking platter.

You soon get the hang of unravelling the Swiss rolls of injera segmenting each stew, folding it around your mouthful like you’ve been doing it for years. As it becomes clear why the tables are covered in plastic, I strategically place napkins about my person.

The chickpeas are wonderfully fragrant – almost floral. The greyer lamb salad is a bit chewy and some of the chicken pieces perhaps need longer in the oven. That aside, the revelation comes when you realise there’s an egg, a whole boiled egg, hidden in the central stew, like a prize. Smothered in camouflage, the garlic lemon marinade permeates its skin – a real challenge to eat forkless, but a joy nonetheless.

When you think you can’t handle any more surprises, Abdul appears, wafting green roasting beans with a palm fan. It’s a blistered, heady scent. Don’t miss the after-meal Coffee Ceremony, which arrives on a red tray, scattered with rose petals and plastic tealights, and accompanied by a large foiled bowl full of popcorn. Super salty and seemingly bottomless, it’s a real mind game with the thick bitter coffee. And it’s only a fiver!

As we make to leave, Abdul urges us to comment on TripAdvisor. My advice? Gals, if you’ve got significant fingernails, you’ll be whiffing dahl for days. They could do with a nail brush in the loo. 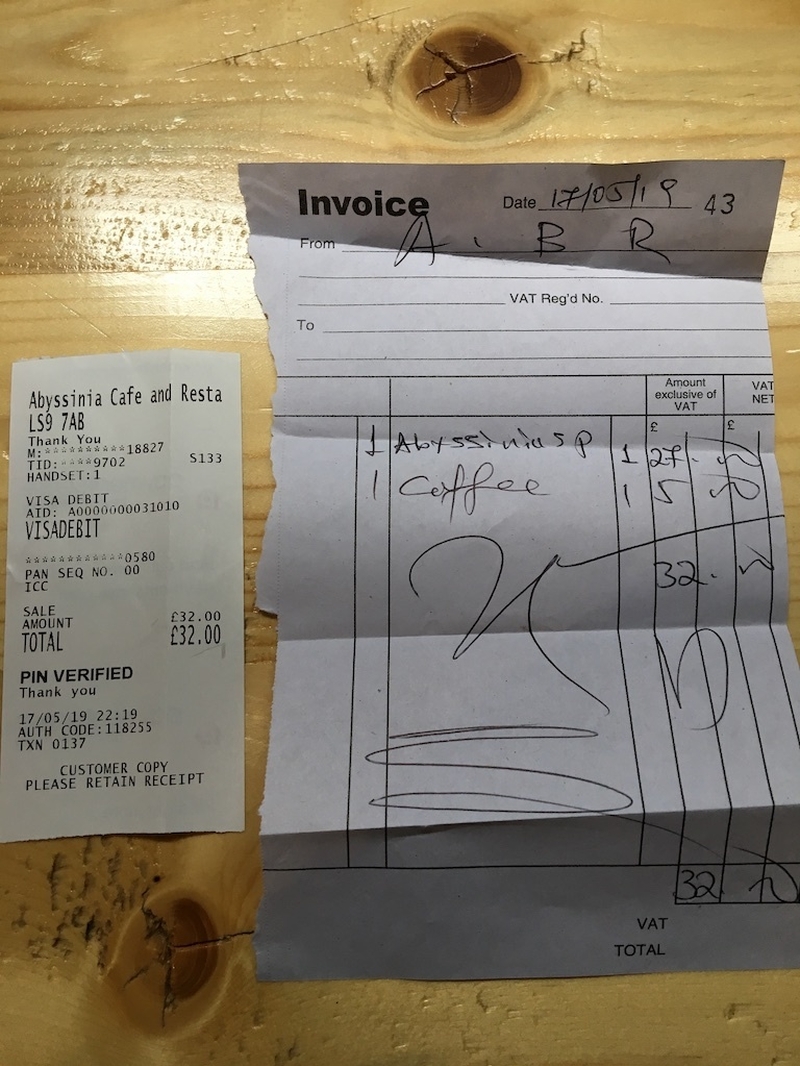