Where to get great ramen in Leeds

Ramen has all the hallmarks of a dish with a footing firmly in ancient history; noodles and soup is hardly molecular gastronomy, it uses cheap ingredients and off-cuts with cheery resourcefulness, and the really good stuff requires the sort of patience that, bless us, we just don’t have any more in these days of rolling news coverate and push notifications. It comes as a bit of a surprise then, that Japan’s national dish - which has inspired worldwide obsession and even theme parks in its honour - only became popular in its home country post-WW2, as a cheap fast food.

In the past five years ramen shops and chains have been popping up around the the UK, attracting food nerds with pretty strong opinions on the merits of tonkotsu vs tsukemen, and while Leeds hasn’t yet to see our version of Shoryu or Kanada-ya or Bone Daddies, we’re not short of choices.

We’ve tried five Japanese restaurants in Leeds and judged their efforts on the categories of soup, noodles, toppings, and that all important Instagram-friendly egg, to see which ones are worth the inevitable dry cleaning bill when you inevitably dribble it down your top.

A disappointing effort from an all-round surprisingly good restaurant (their grilled miso aubergine is one of the best things you can eat in Leeds for under a tenner, hands down) - served in a bowl that’s too wide, the miso-based broth goes cold too quickly and leaves the toppings bobbing around half-submerged as if they’re in a losing battle with some quicksand. The meat’s grilled fresh, but tastes a little processed, but it’s the only ramen to come with narutomaki, which you might recognise from the emoji. Good news for soft yolk fans: the overcooked egg situation is avoided by frying, rather than boiling it. 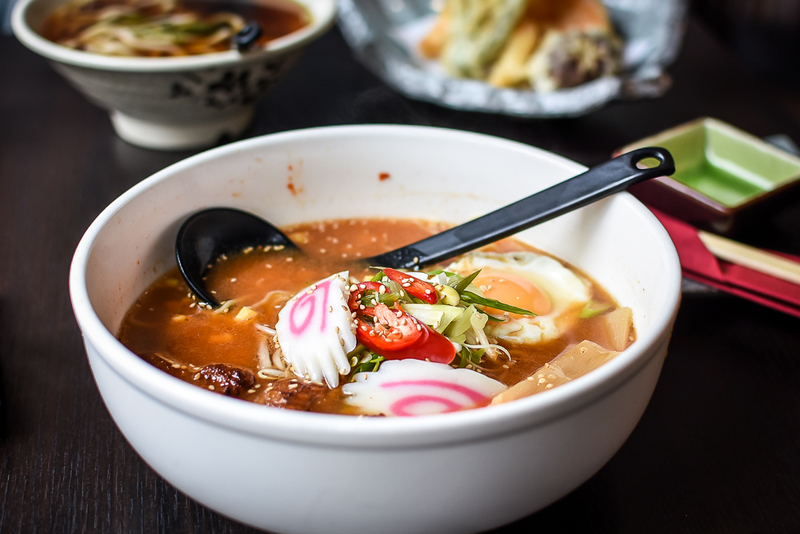 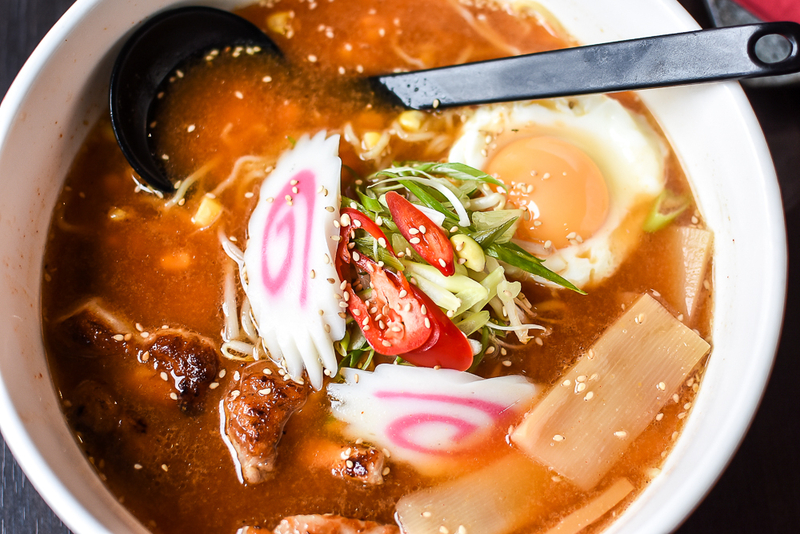 Old and revered enough to be classed as a Leeds institution by now, Fuji Hiro might even have a claim to being the first people to bring ramen to Leeds. The menu had meat, seafood, and vegetarian varieties, packing plenty of vegetables and fresh herbs into clear meat or miso broth, along with the stars like chicken, chilli beef, tofu, and seafood. Pretty good effort all round, except the egg, which cooked to the point of chalkiness.

Read our full Fuji Hiro review from May 2016

This low-key Great George Street cafe features a pretty comprehensive menu of small plates, curries, noodles, and sushi made to order. There’s also a super-customisable ramen section, where you can choose a range of soup bases including pork bone, miso, shoyu, and something called pork & cheese which sounds best left unexplored. To this you can add roast char siu pork, grilled chicken with options of chilli and teriyaki, and seafood. You can even get it delivered, with everything coming in separate pots to be assembled so the egg noodles don’t overcook in transit. The egg is soy-marinated which is a nice touch, but, you guessed it: it’s overcooked.

The prospect of head chef Ben Orpwood’s own-recipe ramen appearing on the menu of new upmarket Japanese bar and restaurant Issho has been teased ever since we interviewed him back in May (he likes his with chorizo, FYI). Following a bit of tweaking, it’s finally here, and it’s worth the wait. Pork bone and chicken broth is so milky white you can’t even see the fresh, hand-pulled noodles lurking in it, and leaves a fatty, frothy tidemark on the side of the bowl as if it was a dish of Babyccino. Blocks of slow roast pork are propped up to the surface, and finished with puffed pig skin, green onions, and - get this - a gooey, bright orange yolked egg. There's one drawback though: it's only available on Mondays.

Big announcement: Leeds has finally got great tonkotsu ramen. Geometric blocks of roast pork, milky-white broth with the clarity of a warg's eyeball, and a bright orange yolk that hasn't been cooked into dust. You're shit out of luck if you want it any time besides Mondays though, get down there sharpish to convince them to make it a regular feature 🤞
A post shared by Thom Archer (@couscousbangbang) on Aug 14, 2017 at 6:28am PDT

They might be best known for their Bento Boxes (or the lightsaber duels they get the waiting staff to perform if you tell them it’s your birthday...do they still do that?), but Little Tokyo’s big secret is its ramen. The chicken one, specifically, with slices of roast meat lolling around in a decent murky stock, bright white slippery noodles, and finished off with enoki mushroom and al-dente green veg. Terrible egg though.