'It takes me ten minutes to readjust to reality' - The Domino Club, Grand Arcade, reviewed

The Grand Arcade has to be my favourite of the Leeds arcades. It’s not eye-wateringly opulent like the Victoria Quarter or claustrophobic like Thornton’s Arcade, and it has far more variety to it than the Queen’s. Over the last twenty years alone it’s been home to bars, restaurants, takeaways, arts and crafts shops, delis and even a metal super club.

Domino Club has to be the first jazz club cum-speakeasy underneath a barber’s shop that has graced the Grand since its erection in 1897. Weird, that. And while a great many of the newcomers to the Grand Arcade over the years have had ill-fated, short-lived runs, the Domino Club is into its third year, and in seemingly good health. Having heard great things, I ventured down below to find out more.

In classic modern-day speakeasy style, you enter through the back of the shop front. There’s a doorman, who politely informs us that there isn’t an entry fee, but a suggested donation of £2, which helps pay for the almost-nightly live music, as well as contributing to an initiative to get young people involved in music. I part with my money as gladly as I ever have and make my way down to the bar.

If you’d asked me to close my eyes and draw what I’d imagined Domino Club to look like, I’d have got it pretty much spot on – other than the fact that everything I draw looks like it’s been done by a blind sheep with a paintbrush in its mouth.

It’s dark – very dark, and the walls are covered with black and white prints from the prohibition era. I note that they’re all well-aligned, which really helps my OCD, and there are several booths at the far end of the club if you prefer a quiet drink to the live music.

The back bar looks promising – heaving with American ryes and bourbons – but before I can take them all in, we’ve been seated, given menus, provided with water and presented with a few snacks. It’s so dark that my partner doesn’t identify the food as Bombay mix until she’s eaten the spiciest piece, much to my amusement. 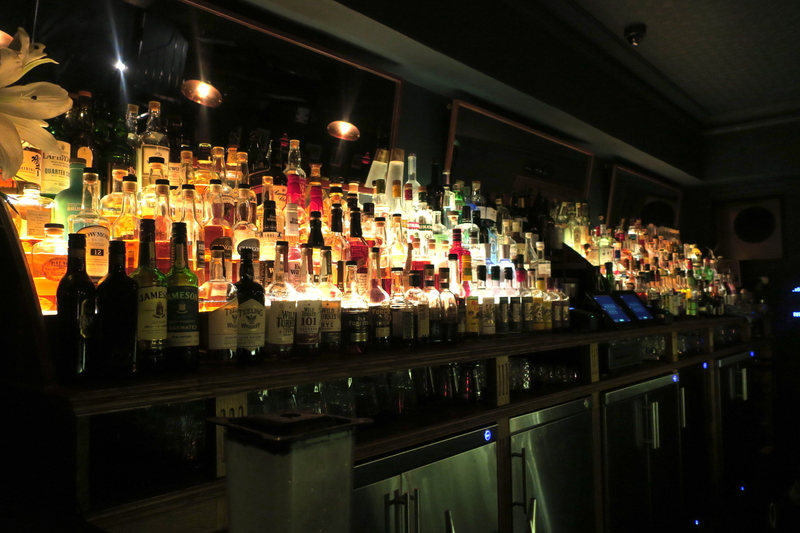 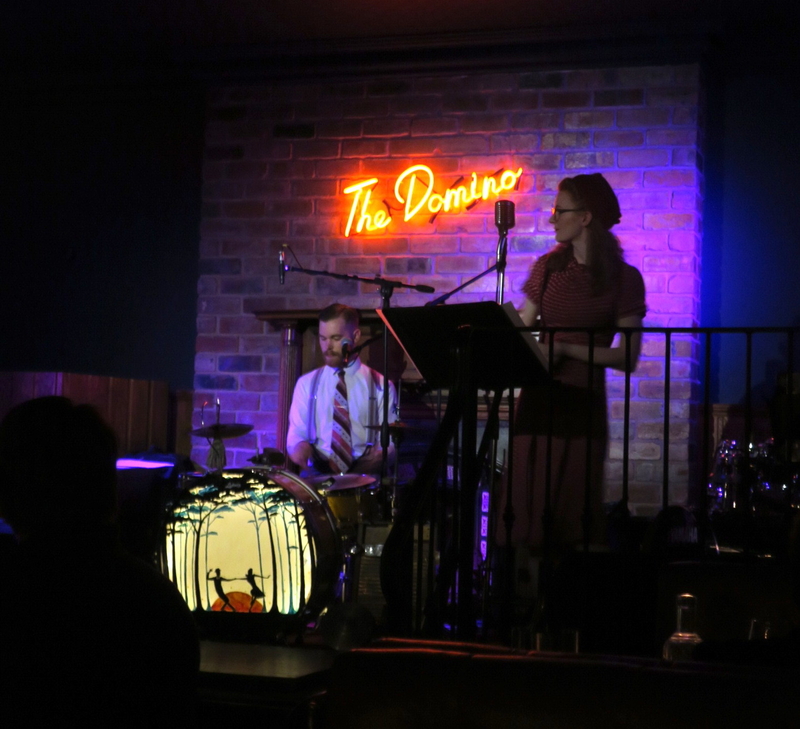 Time for a drink to wash away the giggles. I use my well-trained alcohol homing beacon to locate the boilermakers and go straight for an IPA / corn whiskey combo (£8.50), which acts as the perfect loosener, while my partner has a Bay of Plenty (£8.50) - a long rum, coconut and pineapple cocktail that isn’t my cup of tea; but keeps her quiet for a good twenty minutes.

The live music makes an appearance at 9:30pm on the nose; a mix of classics from the 20's, 30's and 40's that sees a few brave souls get up for a boogie, (What are you doing?! Sit down! This is England, Brits don’t DANCE!) and the atmosphere really come into its own.

I’ve got an absolutely blinding Devil May Care (£8.50), a perfect balance of sweet rum and sugar cane, and bitter Campari. We also sample a Lord’s Above (£8.50) – a very long mix of cognac, fig and cherry liqueurs, a beautifully subtle Nightingale (£9) with a hint of plum and a fantastic egg white foam, and an Oscar’s Remedy (£8) – I chose this mostly because it shares a name with my friend’s two-year-old son (Hi, Oscar!) – but it’s actually the best cocktail of the evening; the sage garnish providing an aroma that is fittingly reminiscent of tobacco.

I should mention that Domino also offer a very good selection of wines, beers and Scotch; in particular, a weekly “break-even liquid” – a special whisky that should be very expensive, but is typically served for £3.50 until it’s gone. This, to my mind, is worth coming in for on its own.

But there’s a lot to love about Domino besides the booze. They’ve got the atmosphere, décor and music down to a tee, and the service is excellent; welcoming yet professional in a way that reminds you of the era that they’re trying to recreate.

And sure enough, when we leave, I feel like I’m stepping out of a cinema after a particularly absorbing film; it takes me a good ten minutes to readjust to reality and remember that it isn’t acceptable to indiscriminately gun people down for being “wise guys” – or to wear spats. I found my thrill, alright. But it wasn’t on Blueberry Hill, wherever that may be; it was in Leeds’ own Grand Arcade.

All scored reviews are unannounced, impartial, paid for by Confidential and completely independent of any commercial relationship. Venues are rated against the best examples of their type: 1-5: put the kettle on instead, 6-9: Netflix and chill, 10-11: if you're passing, 12-13: good, 14-15: very good, 16-17: excellent, 18-19: pure class, 20: made by God him/herself.