‘The kind of place worth sacrificing one’s morals for’ - Stuzzi, Merrion St, reviewed

Ham & Friends seemed a bit fancy pants for Merrion Street. With invitations from Manahatta and Mojo and Mean-Eyed Cat bars to come in and sin, the narrow alley goes a bit Albufeiraon a weekend. No-one round there really wanted biodynamic wines, did they?

Turnip tops turn out to be a revelation; grilled and flopping over heady gorgonzola, twirls of chilli stinging your tongue

Stuzzi doesn’t feel quite like the Venetian baraco that their Harrogate deli does, and it certainly lacks its buzz, in favour of a wider, more airy space. Inside there’s a mixture of plastic topiary and the real Shortpress stuff. There are no unnecessary trinkets to take away from the dishes themselves.

A few of the chairs even have stripy garden furniture seat pads, and with the light ploughing in from the arched windows, you could squint and be half under a gazebo at an Piedmontese trattoria, with the celling fan doing it’s best to replicate a gentle breeze. Except instead of looking out over a vineyard, it’s the A64 and Templar Street car park.

The space under the balcony where H&F sold vac-packed Iberico’s and those ridiculous Torres truffle crisps, Stuzzi’s cornered a well stocked bar with shelves of wines listed in yearbooks on the tables. We’re presented with a couple of reds to sample. Each, as the waitress tells us, under £30; we obviously don’t look like the types to splash out on the Tuscan selection pushing £300.00. Our 2017 Bardolino (£25.50) is dangerously delicate, with a touch of cranberry.

Despite the boar’s head residing over the darkened stairwell, Stuzzi caters well for non-meat eaters. Although apparently this is the kind of place worth sacrificing one’s morals for, as my vegetarian friend eyes up the whipped duck fat butter. The menu changes daily and, as it’s a Sunday, alongside their signature Stuzzichini and pasta, there are three Arrosto options. Everything comes at once, so it’s a job navigating the bliss with only a tiny square and imminently wet plate.

The pasta juices are stippled with rich spots of olive oil, which run through the ribs of thick chewy rigatoni; tossed with semi-dried tomatoes, rainbow chard, and beautifully tanned pine nuts (£8.50.) The capunti are fleshy and dimpled, like little goblin’s earlobes, hiding flakes of grated pecorino. The venison sausage is so very soft and laced with fennel to counter the hum of game. (£9.50)

Wafer thin pane carasau (£8.00) is layered with generous blobs of cold burata and a tangy wild garlic salsa verde caught in the cracks. The bruschetta (£6.50) - which wasn’t in fact sourdough as suggested, was like the poshest cheese on toast ever.

Turnip tops turn out to be a revelation; grilled and flopping over heady gorgonzola, twirls of chilli stinging your tongue. Melanzane, (£8.00) was perhaps the least impressive choice of all, it’s potato stuffing a tad bland despite the tricolour of bright green parsley oil and ruby Napoli sauce.

None of the staff is actually Italian, but they’re not pretending to be. The Instagram bio even states; ‘four English guys with an obsession’. An obsession that lead them to Headingley institution - Salvo’s, and then off camping around Italy, in what I imagine to be a clapped out Piaggio Ape; trundling over cobbled piazzas and wiggling up medieval hillsides, like a budget Palin documentary unlocking the gastronomy of the Roman Empire. Whatever they did, it must have been one hell of a tour, as Stuzzi is about as authentic as you get for Italian in Leeds.

Praying for a second stomach, we try the Piatto Di Dolci (£14.95.) Described as ‘an assortment of Stuzzi’s own sweet mouthbangs - mega.’ Mega is conservative. This wooden plank is Dismaland for diabetics. If you questioned your inclination for an eating disorder, think again. My nose is sweating just thinking about it.

There’s shards of pocked cannoli, squares of baked custard tart freckled with nutmeg, a springy cinnamon donut, strawberries…it goes on. Brownie cubes are fudgey and ganache-like, a lemony European answer to the Bakewell slice, cherry and pistachio panna cotta in a shot glass too small for the spoon your ram-in, mid sugar frenzy. And, a whole lotta cream; some velvet white, some curdled with chocolate, a bit like that gritty snow on the side of the road. The meringues are exquisite though, melting and blotched with raspberry.

Leaving to the sounds of the slightly incongruous Guns N’ Roses track, I do feel like we’ve had a sweet child - a rather delicious bambino for lunch. 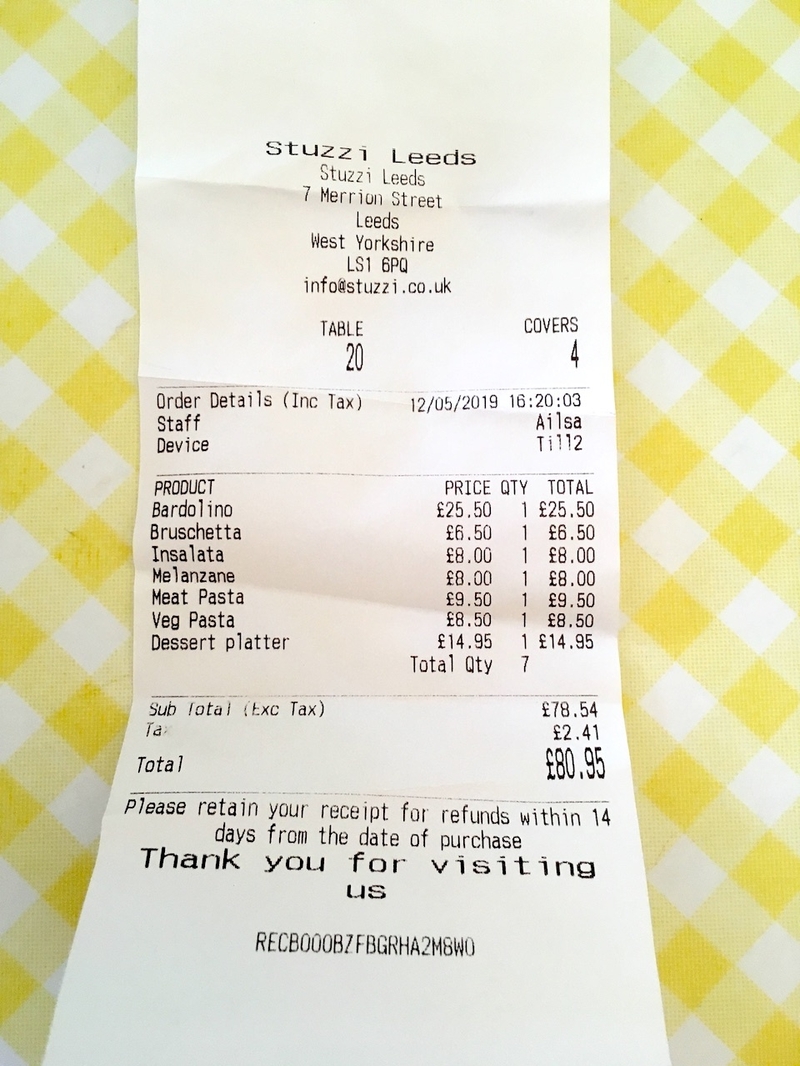