Gordo, bored of tasting menus, finds a gem he loves in Lancs

Well, if it can be called a problem, it’s a nice one.

There’s a helluva a lot of incest knocking about in the Michelin starred restaurants up here. That’s all the gaffer’s fault. That gaffer being Simon Rogan, owner of L’Enclume up in Cartmel.

Normally, It’s slaughtered twice; once at the abattoir and once in the kitchen.

Simon is one of the best trainers in the business, leads from the front, started with fuck all and built a solid business on good people. Not just good; great people. I ate lunch there three days ago; I did the same 15 years ago. And around three times in-between. It gets better and better.

The problem with incest is that the children start to look the same. I’ve eaten in several Michelin and soon-to-be Michelin starred restaurants recently re-scoring for our “Top 100 in the North” list and bloody hell, I’m a bit tasting menu-ed out.

Moaning to my lot in the office, I was getting the piss taken out of me. “What do you mean Gordo? You’ve had too many coal oil dishes? Oh, poor you…”

Yeah, fuck off you lot.

What I’m trying to say is that I want something different. Three or four courses, with big strong flavours, a well-handled protein at the core, two or three flavours across the dish, giving you the opportunity to match one bottle of wine without having your palate assaulted like a canvas being splattered by Jackson Pollock.

Throw in a few tricks maybe. But essentially, I want an experience where the dishes are part of the meal just as much as the conversation and the wine.

As if by magic, along came a spider.

In the form of Tim Allen, a chef who has spent 20-plus years honing his skills in some great restaurants down south with Michelin stars. Winning them latterly himself but always in partnerships.

I met Tim late last year for the first time, in the middle of a building site in Aughton near Ormskirk with my shiny new Exec Editor Kelly Bishop. He’s taken over the old Seafood Pub Company’s wine bar there and was in the middle of knocking the crap out of it. This is chef’s first venture on his own. He was demonstrating to us how to build a kitchen on a shoestring. This guy knows how to buy well. I was mesmerised. How on earth was this khazi going to get to be a classy gaff?

Arriving on a sunny Saturday lunch chauffeured by my ex, Cat Johnson, our first impression was a good one; the building looked well buffed. Walking in through the front door, I was startled, in slow motion. If that’s a thing.

Warm, welcoming, cosy. I’ve been walking into gaff the world over for 50 years and nothing beats the feeling that a well thought out restaurant can give you. It’s gorgeous. You can leave your troubles behind in the car park.

There’s a well-stocked bar with a few comfy bar stools, a small lounge area (where we had a glass of champagne, Paul Herrard, Blanc de Noir, £12.50, good). Front of house is David Hill, restaurant manager, and an old friend of mine, both great fellas, total pros with grins.

There are two menus available. The lunch menu is £35, for three courses, with two choices on each course. This is the one we ordered from. I’m not a great fan of set menus, they tend to be mean. I remember the price this chef paid for his crockery. Which apparently was an order left in the warehouse when another Michelin starred gaff had been unable to complete. Tim got it for cents on the dollar. I was hoping that he wouldn’t be applying the same miser’s plan with the food procurement.

Let’s get stuck in. Is it a Gordo Go or a Gordo Go-Back-Home?

Sourdough bread and Jersey butter lay down the gauntlet to my negativity. Warm and crispy crust, lush inside. The butter at the top of its game. The tell? The butter was at that temperature that enables the spread to lay nicely on the slice. Not too cold, not too warm. That’s either luck or the type of chef you’re going to like; riddled with OCD.

I had the slow-cooked hen’s egg as a starter. Crushed salt-baked celeriac, crispy feuille de brique and truffle cappuccino. That truffled cappuccino had me concerned. Recently we’ve seen truffled stuff all over the place. It stinks. On fries, in macaroni cheese, it’s overpowering.

This wasn’t. It turned out to be real truffle that had been used sparingly, as should Chanel No.5. It’s a real charmer of a dish. Keep hold of a slice of the sourdough to mop up the cappuccino, eh? We’re all Northerners here.

Cornish Cod. Buttered potato, brown shrimp, purple sprouting broccoli and mariniere sauce. At this time, I need to criticise something to make the review a little more real. I can’t. Well, hang on, another spoonful of those immaculate shrimps, maybe.

Lakeland’s beef short rib – 72 hours. Paris browns, Alsace bacon and red wine gravy. Short rib is a new cut championed by hipsters with smelly beards. Normally It’s slaughtered twice; once at the abattoir and once in the kitchen. Not here it’s not. This has been loved to death and then slowly cooked back to life, with layers of flavour melted into the meat turning into a silk purse of a dish.

I didn’t try the rhubarb pudding, I’m not a fan but have a look at the picture. If you like rhubarb, it’s a banger. My cheese plate was respectable if not spectacular. Mrs Kirkham's Lancashire. It’s a cracking cheese to be fair. The biscuits were a bit boring.

Sōlō’s wine list is mainly good French at reasonable mark-ups. A bit on the young side but should settle down as the place finds its feet.

The dishes here are very different to most of the starred chefs who learnt their craft in amongst the Cumbria Culinary Mafia. Tim Allen is delivering food here worthy of a Michelin star and arguably a top ten in the next Top 100 Restaurants North. Hopefully, Tim should attract new blood up here; we may well find chefs cooking good old a la carte soon. If I were you, I’d get your arse here before a Michelin star arrives and you can’t get a table for months.

I think you’ve figured it out. It’s a Gordo Go. 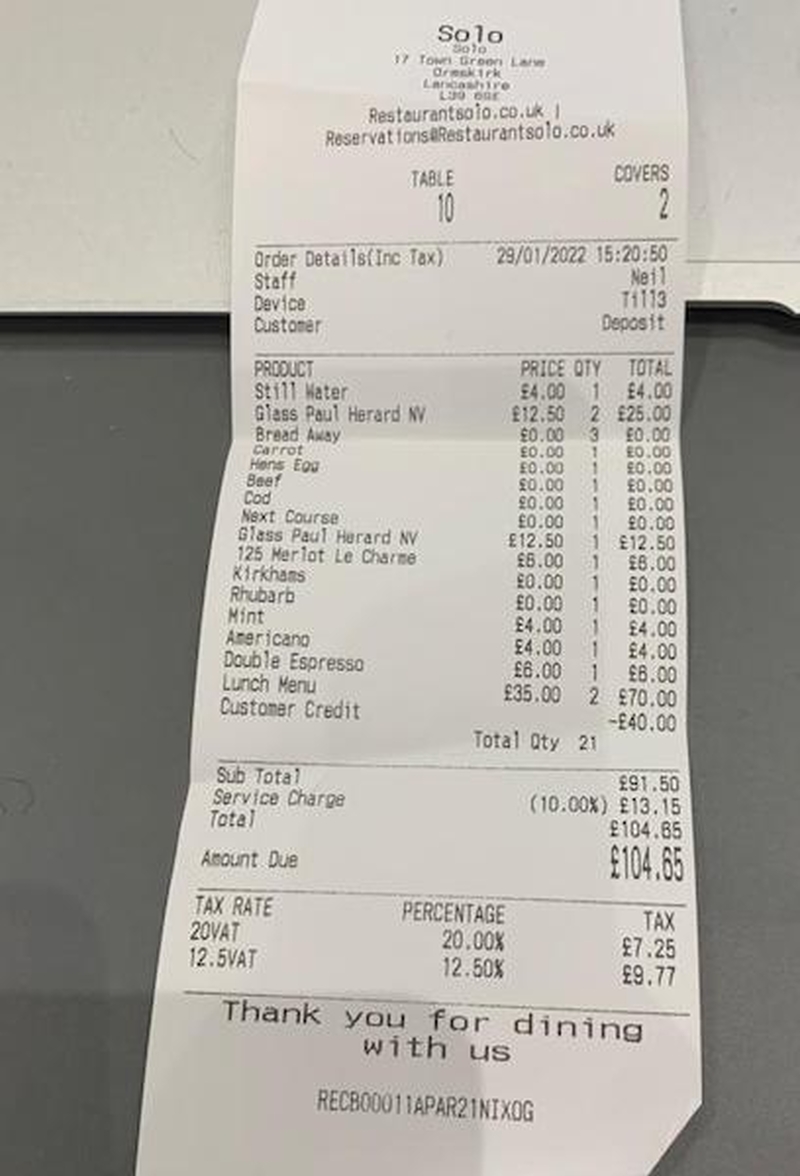