I've always fancied shouting that but missed my chance on my last voyage. A very soggy landlubber, who'd leapt from lock to deck and carried on till he plopped off the stern of our cruiser, emerging with his iphone clutched in upraised hand, was already being hauled from the murky waters of Le Canal de Garonne before the alarm could be raised.

Spluttering, shivering and lamenting his wrecked mobile the Man Overboard lived to sail another day while I did my best impression of Prunella as we cruised to the Prune Capital of France.

My reward: a scintillating view of a kingfisher darting along the river bank, casting a turquoise reflection in the water

The French canal system, dating to the 16th century, links the Mediterranean to the Atlantic. The banks of such ancient canals, designed for horse drawn barges, are fragile and a careless bow wave can damage the structure.

A fast learning curve saw us ducking under low bridges, operating locks, fiddling with the bow thruster, tying knots, casting off and not falling in. 'Slow is pro' is the mantra as we reduced speed when passing moored craft, anglers and kayakers. And when approaching locks.

Before each lock you encounter a dangling sausage-shaped mechanism strung overhead that you must twist to activate the lock opening. Miss the 'swizzle stick’, as our Captain Gracie called it, and you have to describe a Carlos Acosta pirouette and try again. You make that mistake only once.

And only once did I mutiny. Needing to warm up on a chilly, misty autumnal morning of dew-bejewelled cobwebs, I jumped ship, opting for one of the bicycles stored on board to pedal along the towpath, tossing a friendly bonjour at each encounter with a Lycra-clad cyclist. My reward: a scintillating view of a kingfisher darting along the river bank, casting a turquoise reflection in the water.

Our trip began at Auberge de La Poule à Vélo. It means Chicken on a Bike and its playful decor is as bizarre as its name and location, a converted lock keeper's house down the road from the crematorium and abattoir.

A menu of duck and prunes, stuffed peppers, crème brûlée with heavy red wine set the tone for the rest of the journey from Saint-Jean-de-Thurac. Our English ancestors favoured this region's wines as large quantities were exported to London during 300 years of English rule.

We quaffed a few glasses to celebrate our journey to Agen, main cathedral town of Lot-et-Garonne, rich in 2,000 years of history with timbered buildings that wouldn't look amiss in Stratford-upon-Avon.

Agen rejoices in the title of prune capital of France. Prune chocolates, prune liqeur, prune wine, plum brandy and 101 other ways to use the fruit. You can visit one of the 1,400 local prune farms where 40,000 tonnes of Ente plums are produced every year.

Our next lunch date, at Le Prince Noir in Serignac-Sur-Garonne, was a prune-free zone in favour of fois gras with wine jelly, langoustine, sushi, pepper stuffed with chicken, and a Grand Marnier soufflé so light it needed anchoring to the plate.

Strict opening times apply in this 17th century former convent. Lunch is 12.30 to 1.30 and booking advised. Likewise, tourist offices have rigid times, as do prune farms, vineyards and wine caves. The Buzet wine cooperative is one of the most visited tourist sites in the region. Woe betide late arrivals.

We were, so drowned our sorrows at a friendly canal-side restaurant, Auberge du Goujon qui Frétille, in the aptly named Buze, and enjoyed glorious food topped off with a prune pudding.

There's no cruising through locks after 6pm, so were content to turn in. Armed with vital  torches piercing the darkness we negotiated a canal bridge and towpath to our mooring. Ample food and wine produced a chorus of snoring. Pack earplugs as walls are wafer thin.

Other musts: gardening or sailing gloves to haul wet ropes; insect repellent to deter mosquitoes; layers for chilly dawns and dusk; non-slip shoes so you too don't end up like Man Overboard. 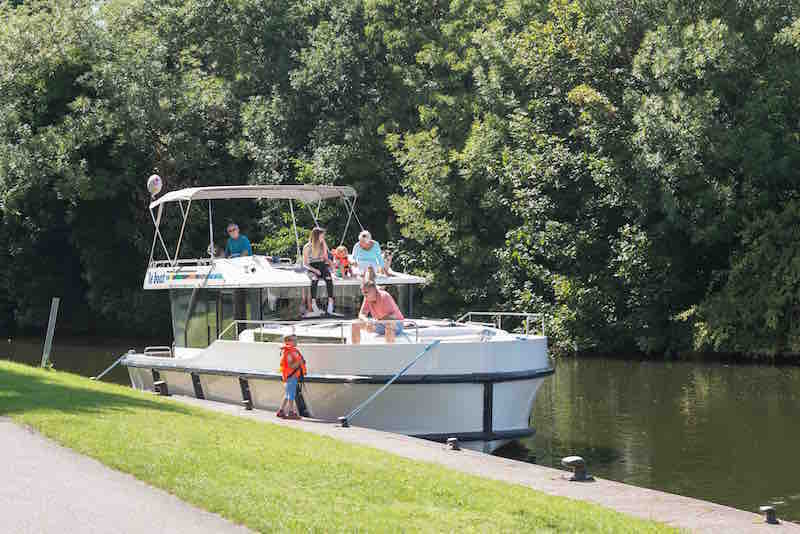 Next day we basked in baking sunshine as we cruised towards the Roman village of Mas d'Angenais.  We sought shade under a blue bimini, or boat canopy, to picnic on tuna quiche and chocolate cake – a takeaway from Restaurant La Cocotte du Mas, washed down with chilled rosé wine.

The once thriving market town has a rather forlorn air. Our guide, Isabelle Charrieu, employed as a storyteller and greeter, showed us the algae-covered outdoor washing baths where women would bring their laundry. A magnificent castle was demolished in the 16th century. The pride of the village is in the St Vincent Church – a priceless Rembrandt painting of Christ on the Cross, dated 1631. Disappointingly it had recently been removed for restoration.

Belatedly the authorities are also working to restore the town, but Isabelle fears it is too late. “Only a thousand inhabitants are still here when it should be many times that amount.  Buildings are empty. I think it is dying and all the work they are doing now is too late. Ten years ago it would have been a good thing,” she says ruefully.

But the town showed its spirit that evening at its pumpkin festival, with townsfolk from toddlers to veterans in wheelchairs winding through the streets in a blaze of colour and music, drums and whistles, dancing and chanting. Mas d'Agenais came to life in front of our eyes, although the orange and green costumes made the villagers look scarily like an Irish Ku Klux Klan.

The Delicacies of Aquitaine Cruise A seven-night self-catered stay on board Vision 4 is priced from £2,589 per boat.  Vision 4 is a 5* boat sleeping up to nine people in four cabins.

a galley (kitchen) with all the utensils and appliances you would expect;

towels and linen for all passengers; a boat handling demo; technical support; on-board cruising information; locks free (except in Ireland and Holland).

Parking is available in an open air, locked car park from £5 per day; £35 per week

Please visit the options and travel page on Le Boat’s website to find out more about the extra services and packages available.