Modern classics in a historic setting

We’d only been sat down in Shears Yard for about two and a half minutes before the first pleasant surprise arrived. Slow down lads, I’ve barely had chance to take my coat off or move the table a bit away from the wall to accommodate my January podge yet, and you’re already scoring marks.

Despite the fact that the dining room - with its constellations of filament lightbulbs against tatty exposed brick and a horizon of brutalist concrete - looking like it was specifically designed to piss off Burgundy-cheeked Restaurant Diners™ who’d petition to bring back singing God Save The Queen before every luncheon, Shears Yard kicks off proceedings in the most traditional of ways, with bread and butter.

Simple pleasures laced with novel surprises and riffs; reliable dishes of direct, familiar flavour, layered with a bit of intrigue

It’s not even trendy sourdough either, which Cheese Trolley Twitter bemoans for requiring a jaw like a traction engine to chew through (in fairness they’re not wrong, I ate a sandwich made with sourdough once and my mouth felt like I’d had a mad one in a club in Preston, rather than a Mozzarella club with pesto).

It’s a good old fashioned homemade white loaf with cakey crumb and audible, barky crust. Hazel who serves us tells us it’s made with wheat beer from Armley’s Eyes Brewing, and served with a yeasted butter that tastes like walking tongue-first through a brewery on a humid day. She asks if we’d like some more, and I politely decline, albeit as convincingly as a hostage letting their loved ones know they're being very well looked after, while blinking panicked morse-coded messages. 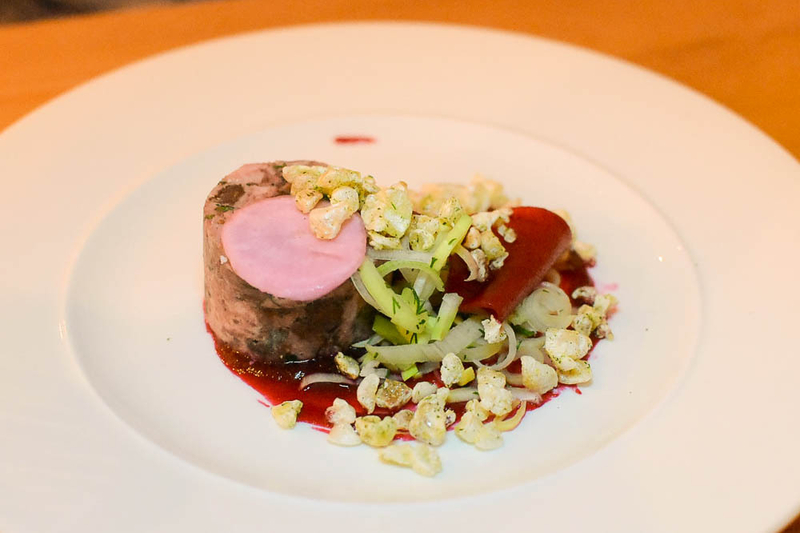 The tone is set for the rest of the menu; simple pleasures laced with novel surprises and riffs; reliable dishes of direct, familiar flavour, layered with a bit of intrigue; liver parfait and ham hock terrine and cured fish, with the kind of technique foreshadowed by that post-modern decor, without looking like a Masterchef audition reel, and more often than not, it pays off.

A terrine of ham hock & black pudding has all of the gutsy oomph you’d expect, along with with the bracing sweetness of dill, beetroot, and leeks. Being served slightly cold means the pig-morsels are a bit frigid and unyielding, but there’s pure joy in the Rainbow Drop-esque stale chew of crackling puffs. Worth noting also, that the starters - this, a cured trout, and a line-up of soups, mousses and parfaits - feels like they’ve been written for patients on the lockjaw ward, I crave something else to sink my teeth into.

There’s an admirable attempt to breath new life into Yorkshire blue by whipping it and serving it with caramelised onion, celeriac remoulade, and sticking some “sourdough crisps” in it all, like a butterfly poised to take off; I like it, it’s classic, and the flavours all do their job, but it’s not a starter. Come up with a couple of other ways to finesse cheeses into new forms though, and it’d make a must-order Willy Wonka cheeseboard to cap the meal off with.

Like blue cheese, pork belly isn’t a reasonable person’s go-to order when going out for their first, post-Christmas-blowout meal of the new year - no more than a Long Island Iced Tea is a suitable way of celebrating your first day at The Priory - and yet here we are… 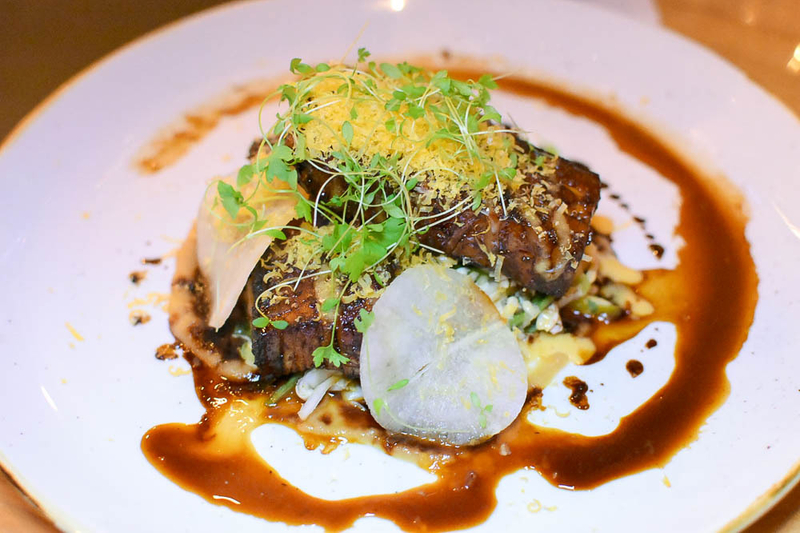 An long-distanced - no, estranged - relative of the flabby festive porchetta I persevered with right up until New Years Day, these were two cross sections of belly confited and pressed and braised in that complex citrus-seaweedy ponzu sauce. It becomes all flakey-flesh and rendered fat, countered by the rowdy acidity of a Japanese-inspired slaw.

A fillet of sea bass with pursed skin basks in a cardamom carrot puree and langoustine and crayfish korma, it’s the impressive work of a chef with a nimble palate, but all that sealife is crying out for its roots, a good whack of seasoning or briny samphire would have brought it all together perfectly. 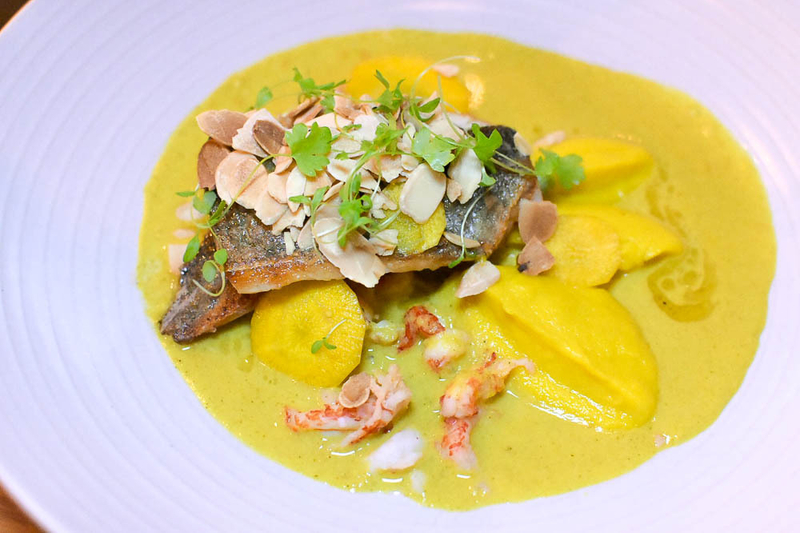 It's not uncommon to find a restaurant with the kind of self-aggrandising, knowing, smooth-talk that Shears Yard's has, but its even more common that in practice, it under-delivers or flaps around pathetically like when an Apprentice contestant tries to use their Business MA to barter on Columbia Road Market. Luckily that's kept to a minimum here with show-offery usually employed to some practical benefit, and with the proper skill to back it up.