Could Red's be about to embark on some proper cooking? There's no smoke without fire.

“Didn’t expect to see you here” says James Douglas, co-founder of Red’s True Barbecue. What a welcome. Can’t blame him though, I wouldn’t usually expect to see me in there either.

I'd visit Red's two or three times a week back in its first few months, dragging friends/colleagues/people off the street along while I worked my way through the menu of pretty-decent barbecue. I even went there on a date with somebody I had credit-card-balance-transfer levels of interest in once, just so I’d have somebody to go with.

A few months later, what started as a labour of love paying homage to “true regional barbecue from the east to the west” had got caught up in its own popularity and marketing bluster.

Now a relic of the dude food trend that hit terminal mass a few years ago, Red’s brand of dick-swinging via aggressive consumption festers like smoke on that coat you wore to a bonfire.

Created from a rib and ruining a pretty good arrangement by succumbing to temptation, Red’s is the restaurant equivalent of Eve in the Garden of Eden (Excuse the corny biblical analogies, but the restaurant does invite us to “worship at the altar of meat where so many before you have seen the light.”). The ‘apple’ here was the irresistible lure of monetising the brand through concept roll-outs, cookbooks, and supermarket sauce ranges, each venture bringing diminishing returns to the restaurant’s food.

Red’s crusade saw it move physically further from its Call Lane flagship, conceptually further from “true regional barbecue”, and into the realms of gauntlet-dining; Who can take on the Donut Burger? Are you man enough to eat a metre of onion rings? How else can we exploit your fragile masculinity by pairing lacquered meats with stodgy beige carbs?

Once you’ve shoved the supporting cast of Babe inside one burger, where do you go from there?

Things can only escalate along this trajectory until they become a self-parody (Almost Famous seems to have missed that memo, though…) - once you’ve shoved the supporting cast of Babe inside one burger, where do you go from there? Ok, in Red’s case they swap the bun for two glazed donuts, very good, what next though?

Well, they’ve done some actual cooking. Or at least had a go.

Red’s “Holy Trinity Pitmaster Experience” is the hyper-branded collaboration between the restaurant, Leeds breweries, and Bulleit Bourbon; marrying barbecue, beer, and bourbon (the “holy trinity”) in a series of dining events Red’s outposts around the country. Each event involves four courses (three and and ice cream float, if we’re being pedantic) from the pit or smoker, paired with beers, and finished off with a cocktail (An insipid pre-mixed Old Fashioned which suggests that three’s a crowd).

The involvement of uber-credible local breweries Northern Monk and North Brewing Co. seems to have encouraged Red’s to up theirgame, and serve two totally new dishes alongside their signature Black Angus Brisket and 16hr Burnt Ends (£15.95 on the regular menu, with sides). Ironically, their tried and tested old standard was the low point of the meal

You’d think they’d have it down to a fine science by now. In the past four years they must have cooked more livestock than the food and mouth pyres that swept the British countryside in 2001 - the pyres probably yielded less-overcooked results, though. I assume Red’s two custom-built smokers must have switched to vaping as a New Year’s Resolution, because there was no identifiable trace of hickory or applewood or anything besides vague, generic roast beef.

A bit of relief comes in the form of burnt ends, though: bite-size morsels of the brisket point, with a large surface area to take on sauce and smoke and crust, giving them a satisfying chew and concentrated flavour. They’re what a World’s Strongest Man hopeful might eat instead of Starburst.

Speaking of chewy, smoked duck was a swing and a miss, doomed from the moment they decided not to use the duck’s breast. If there was ever enough fat on a duck’s leg to stand up to slow, dry cooking, it was long gone before it arrived on the plate. A cherry chipotle BBQ sauce might as well have been a drizzle of red sauce from the ice cream man for all it contributed to the dish. 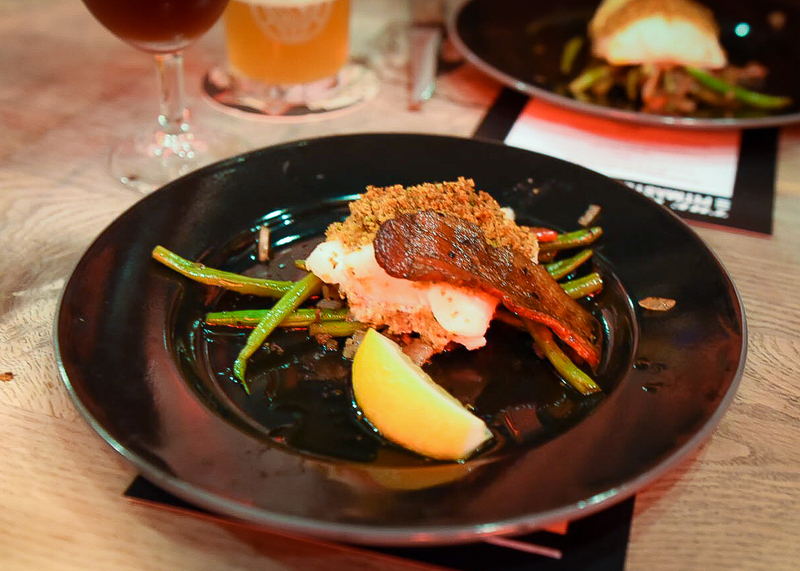 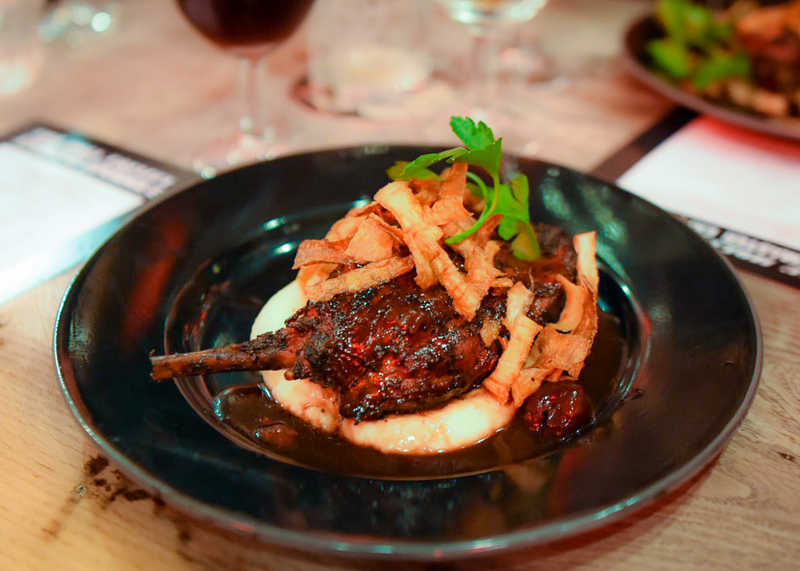 There’s some competent cooking on offer though: haddock loin (a touch overcooked and apparently plated up from a distance of several meters, but we’ll make allowances on this occasion) has a herbed crumb of walnuts and powdered pork crackling, there’s a tangle of al dente green beans with smoked garlic, and a flawless example of crispy bacon. Not a mind-blowing combination of ingredients or flavours, but a complete dish none the less, and most importantly it’s served on a plate, and there’s not a donut or waffle in sight.

Aside from its flaws, this menu appears to have been dreamt up by a person that can - and wants to - cook food, rather than somebody who secretly tugs one off to the gorier bits of Cowspiracy while stuffing a non-vegan fiver into their mouth. It injects a bit of ambition and imagination into Red’s considerable resources, rather than a cycle of tireless repetition and escalation.

Red’s are currently in the midst of a £5million, 5-year plan which aims to expand the brand to 20 restaurants by 2020. I don’t know the ins and outs of the plan, but I’d wager it doesn’t spend much time talking about the likes of haddock loin and smoked parsnip puree. Shame. With a bit of work it could be a decent, credible barbecue option. I expect I’d see myself in there a bit more often.

Atmosphere: 4/5 - If The Crystal Maze had a Heart of Trump Country" zone, it'd look like this. Impressive, in a way.