From Maersk to Michelin - Thom Archer reviews a fine dining restaurant inside a shipping container.

We hadn’t even got so far as ordering our drinks when I got a sinking feeling. “Do you have a cocktail menu?” I asked, guiltily trying to buy us some time after Storm Doris had made us half an hour late getting to Sheffield. “Not yet, sorry - we will do eventually, but we’re only five weeks old”

Generally, it’s good form to give restaurants a couple of months to find their feet and hone their practice before subjecting them to a review, yet here I was, having barely given Jöro chance to unwrap their Kamodo Joe. Maybe I’d stop at the park after lunch and slide-tackle some toddlers taking their first kick of a ball, then bellow some vulgar terrace chants at their Mothers.

In my defense, Jöro doesn’t strike you as the type of restaurant that’s only been around for five weeks - an Instagram feed full of pine jams and experiments with nitrous oxide and 600-dish services suggest a confident and able kitchen. They’re making all the right noises and being heard by all the right people, too - a week before I visited, a representative from little-known publication “The Michelin Guide” took to twitter to praise their efforts. 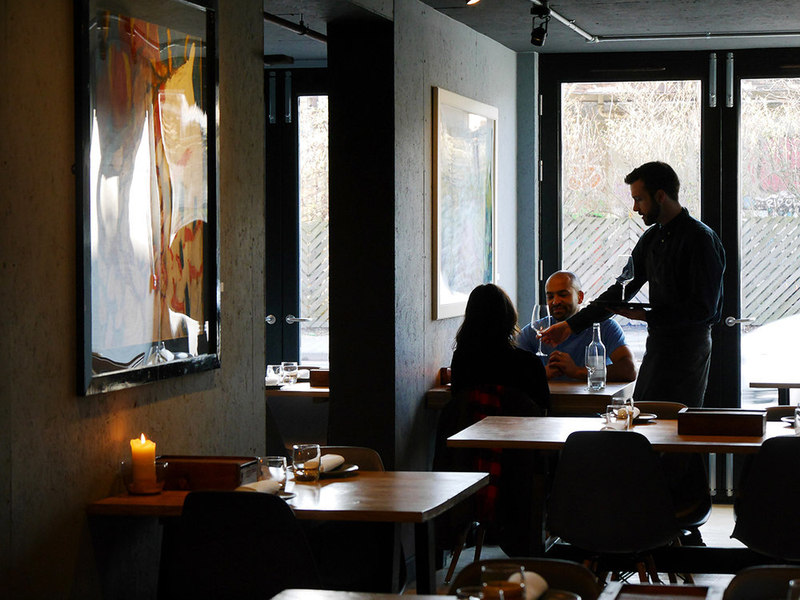 The name’s been hanging around in the air for some time - starting as a series of pop-ups last year, Jöro was earmarked to go into the Krynkl development. While it might sound like an IKEA ironing board, the name refers to the corrugated exterior of the building, a trait inherited from the fact it’s made up of several interconnected shipping containers.

Despite all of the bad PR they received from The Wire season 2, these shipping containers make cheap, sustainable, and environmentally-conscious building materials for developments such as Krynkl, or one of London’s Boxparks.

In fact, wanky food-writers might gleefully offer parallels between venue and food, smugly pointing out how they take entirely unassuming and unspectacular resources, and turn them into something really quite special, through a bit of forward-thinking vision and ingenuity.

In fact, I’m a wanky food-writer, so I’m going to exactly that. In fact, I just did.

Our 12-course tasting menu (£65 per person) has eight savoury dishes, five are unassuming, local, seasonal vegetables - the “shipping containers” - elevated by some magic in the kitchen. 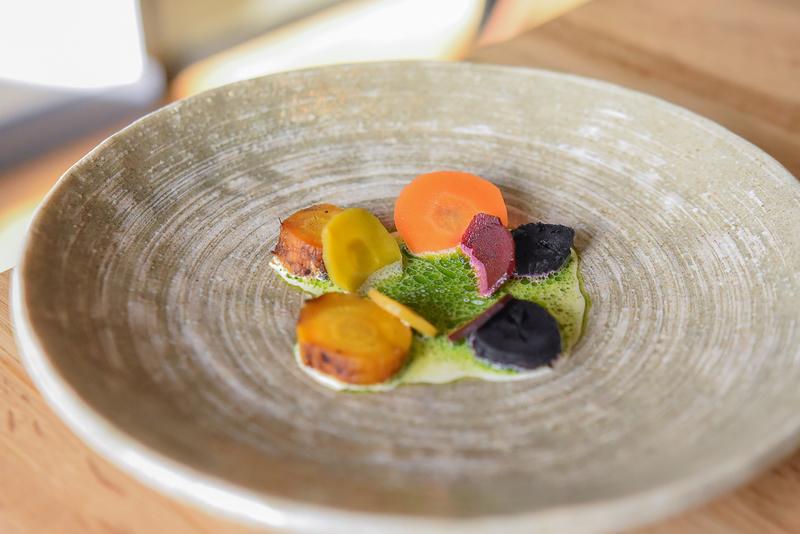 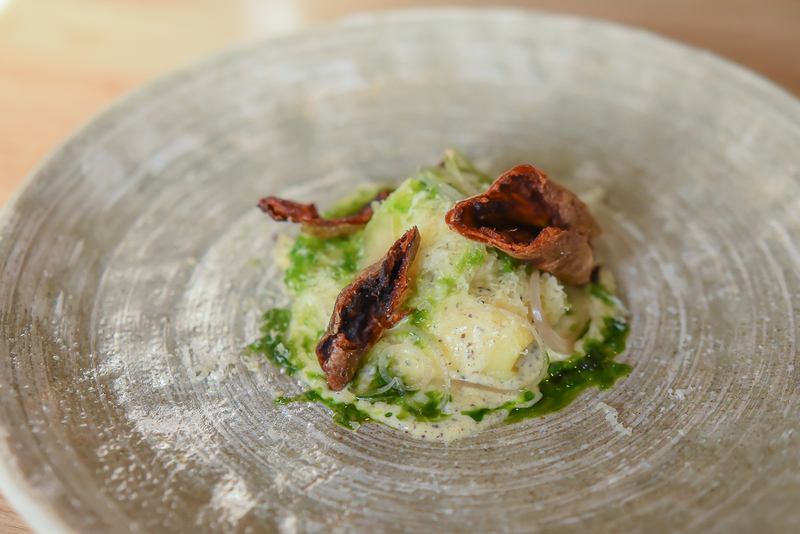 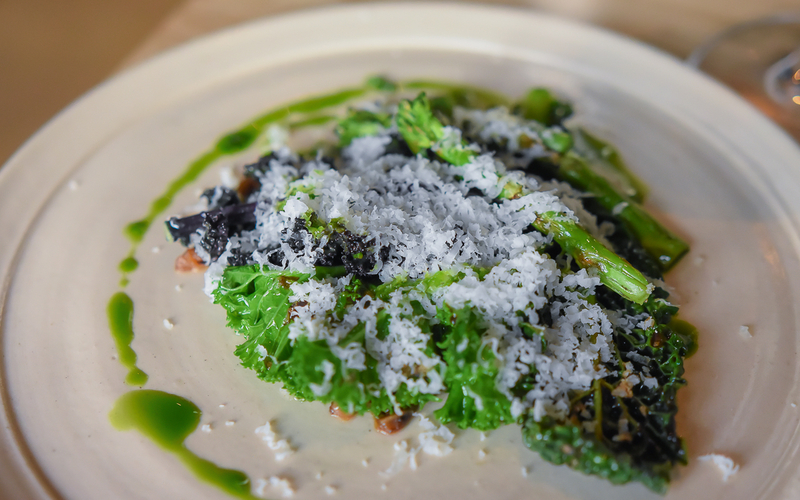 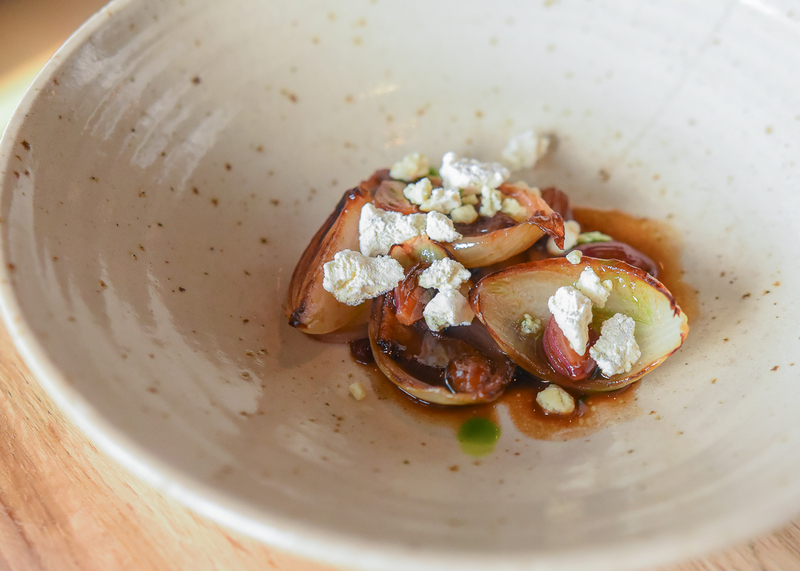 Heritage carrots are given the Jekyll & Hyde treatment, served charred and pickled, interrogation methods that expose different shades of the vegetable’s personality. So far, so Nordic. The real wow moment is the Burnt Cream, created by putting the red-hot Birch embers used to barbecue the carrots into cream to infuse it with alkali woodiness.

Potatoes are roasted in yeast and hidden in a whirl of mash, dressed with a sharp, salty-rich sauce of 15-year aged Lincolnshire Poacher cheddar and black truffles. The skins are re-roasted to turn them into gnarly shards of crackling, ruby-red and glistening like the inside of cracked-open geode.

“Brassica XO” is a punchy, umami XO sauce - made with shiitake rather than the usual shellfish - draped in sweetly vegetal frills of grilled cabbage and a flurry of Goats-milk parmesan. “Star” ingredients of humble beginnings,  transformed by the kitchen into lick-the-plate-clean dishes; this lot could make a prom-queen out of Steve Bannon. 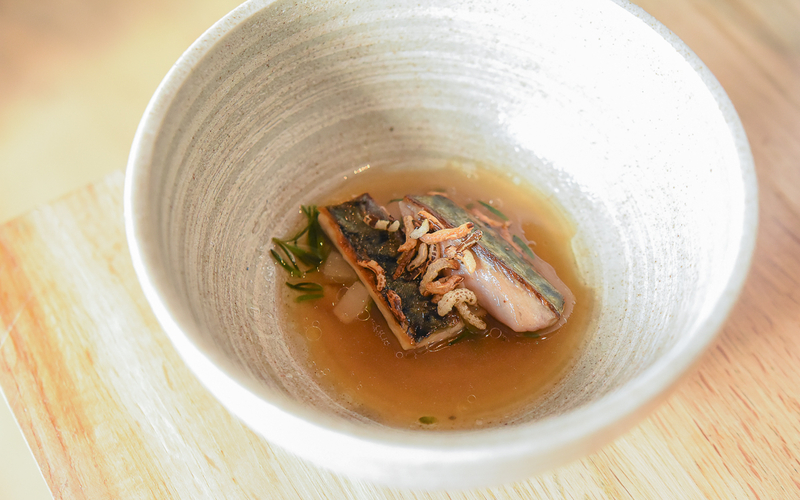 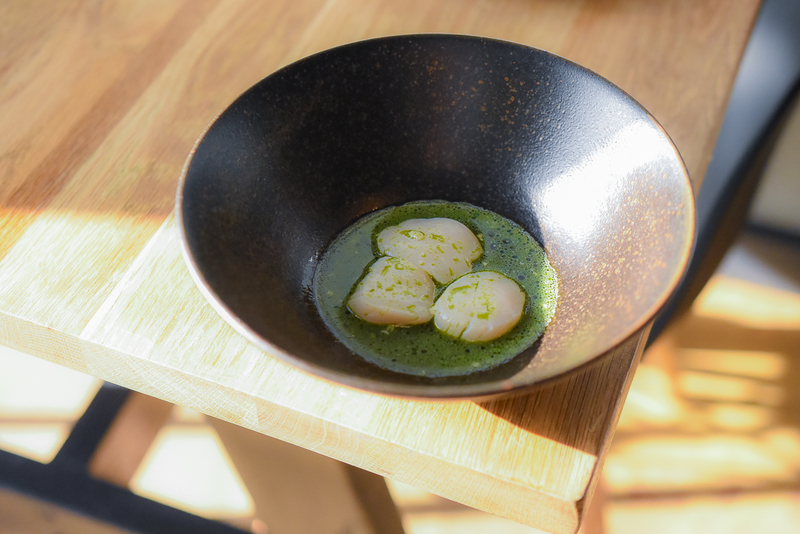 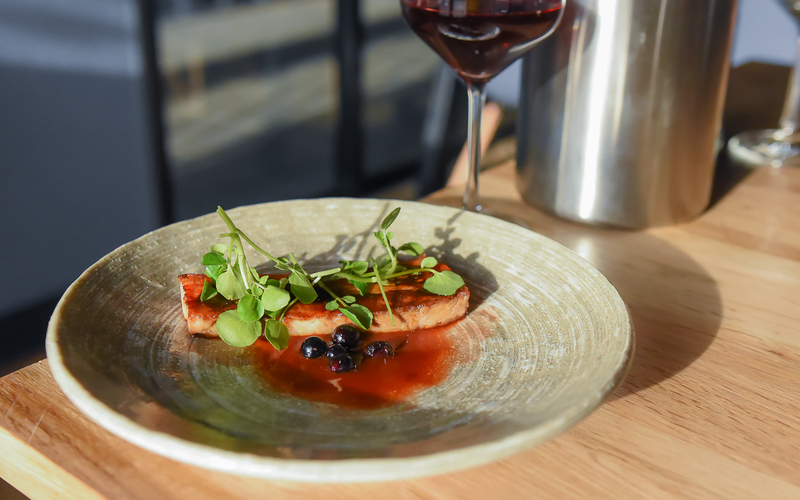 A couple of good, fatty pieces of Mackerel, in skin with the slightest hot dog-style “snap” are served in a broth made from the barbecued bones of the fish, allowing you to taste every fibre of its being. Combined with crystal-clear pools of miso oil that bob along on the surface, it’s like luxury ramen.

Scallops are poached - until just tender enough to be sliced with a spoon, or just a few words of persuasion - in apple juice, emphasising their sweetness without being cloying. They bathe in a perfect balance of mussel sauce and dill oil.

Pork belly is a cut of meat whose potential is rarely fully realised, but Jöro has nailed it. Local butchers Moss Valley provide the goods, complete with a jacket of milky white fat that practically sings about the high welfare standards enjoyed by the pig. It’s glazed with Koji paste (a type of mould used in the fermentation of miso, soy, and sake) that’s countered by an incisive blueberry liquor.

Koji rears its murky head again in a dessert, present in tiny blocks of fudge with the potency of salted caramel that’s sold its soul to the devil. It comes on top of aerated white chocolate - a crisp, rigid sponge of homemade aero. As the chocolate is brought to body temperature on the tongue, the bubbles of air practically fizz away, like a lit fuse leading to the eruption of koji fudge and miso caramel. 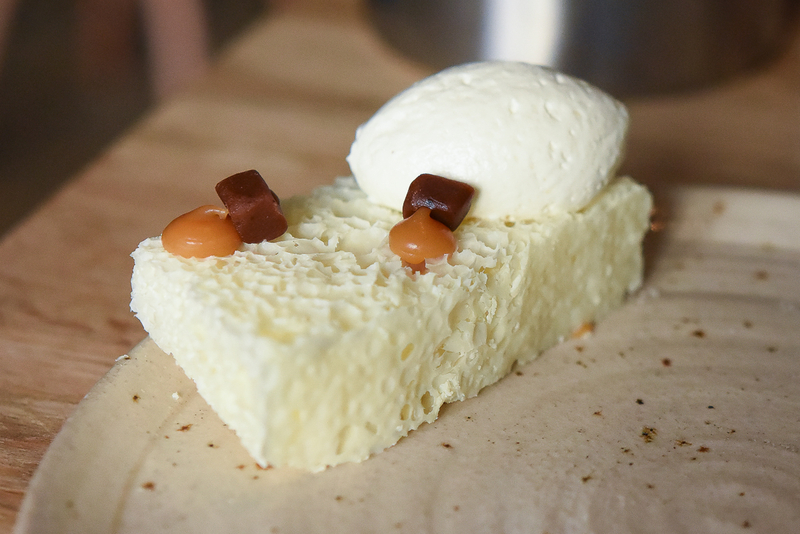 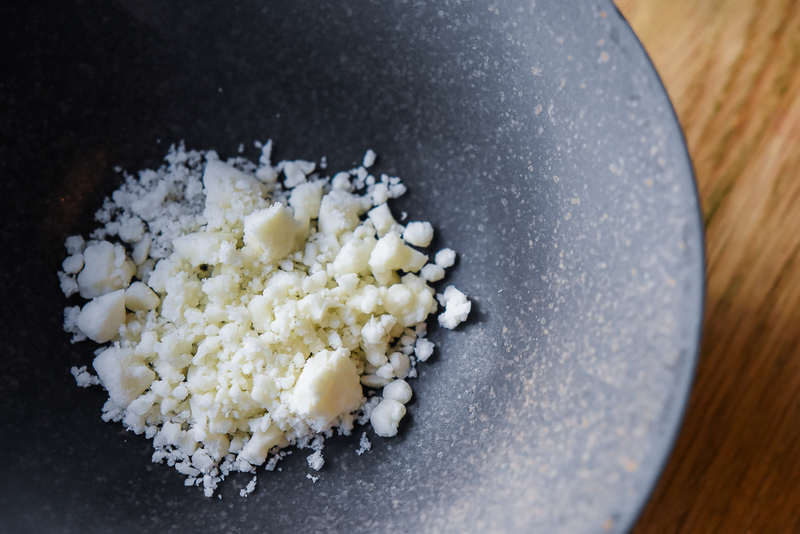 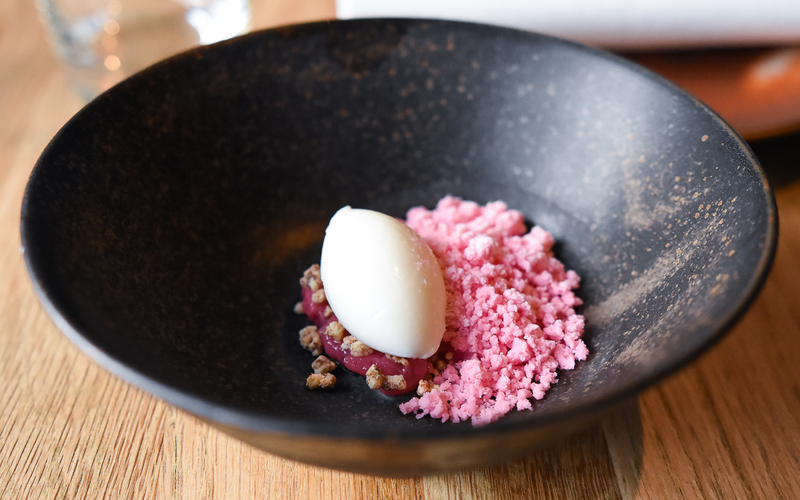 You often see food described as “appealing to all the senses” which is largely bollocks - the fact that the above aero experience all happened in perfect synchronisation with this fizzing crescendo and surging boot-off on the stereo was almost psychedelic. I realise this was probably sheer coincidence and that the staff can’t possibly have planned this kind of near-psychedelic serendipity - then again they’re absolute wizards at every other aspect, so why not?

Service starts off more formally than the relaxed surroundings might lead you to expect, but our server Bryn quickly and naturally tones down the formalities by the time we’re a few courses in, making it more comfortable for everybody involved, while never sacrificing professionalism. Try as I might, there’s nothing that his encyclopedic knowledge of the dishes and techniques doesn’t cover.

He also downsells the £50 wine pairing in favour of an Akemi White Rioja (£27) with Swiss army knife versatility across most courses, and a soily, plum-jammy Spanish Pinot Noir (£30) and recommends Judith Beck’s Beck Ink by the glass (£11.50) for the Brassica course - a light, fruity, biodynamic blend of Zweigelt and St Laurent that shrugs off the stigma often attached to Austrian wines (“Don’t worry, there’s no nail varnish remover in this one” Bryn assures us)

Tempted as I am to do that thing restaurant reviewers do, when they find a place as good as this, and turn into a miserable pedant in an attempt to inject some balance, I just haven’t got the heart. And besides, I’ve got some toddlers to slide-tackle...