"It elevates the ordinary into the outstanding" - Pizza Fella

Never mind investing in Bitcoin, people who got into the OSB game early on must be absolutely raking it in now. You know the stuff - no, not the Brooklyn Zoo rapper, that's ODB. No, OCR is an A-level examining board. Why would I open a restaurant review by talking about an examination board? What kind of bizarre tangent would that be?

I'm obviously talking about Oriented Strand Board. The recycled wood that looks like a Weetabix covered in dried PVA glue. Up until a few years ago it was an unseen hero used for load-bearing, as a canvas for backdrops in low-budget stage productions, or makeshift benches in tour buses and trades vehicles.

Every dog has its day though, and right now it’s everywhere. First adopted by independent upstarts who needed a cheap and versatile material to deck out their venue, it’s been appropriated as a fancy dress costume for anybody that fetishes “independent food and drink culture” and wants to reap the goodwill that comes with it. 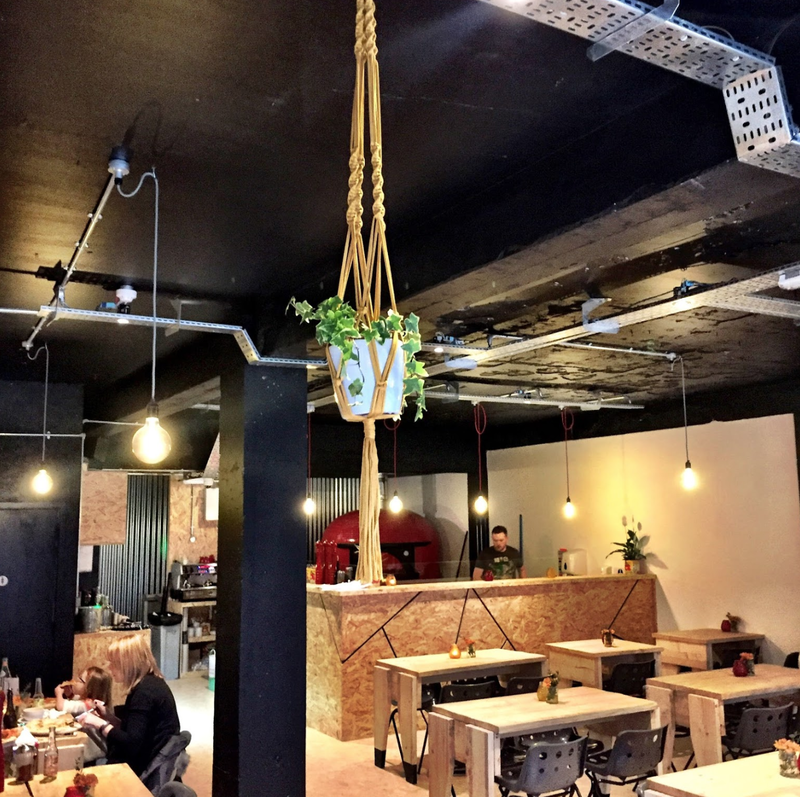 Pizza Fella owners Helen Collier and Miles Robinson fall into the former category; this is their first venture away from their Citroen H street food van, and into the luxury of a venue with plumbing and a postcode and headroom. It sits on that strip of Vicar Lane over the road from the Chinese supermarkets, which is earmarked to undergo a minor restructure, and become a pile of dust when property developers Hammerson start phase two of the Victoria Gate development. Understandably, they didn’t want to call in the rare marble-fitters.

So the aesthetic is very contemporary, and a little bit temporary. Like an office that’s been set up on a building site. Which is kind of what it is, really. There’s a clear DIY ethos to the plyboard wall decorations and handmade tables. Visiting Dads will relish the opportunity to break out their “It’ll look nice when it’s finished!!” gag that has everybody in fits* on holidays to ancient ruins. (*Actual reception of joke may vary).

That sparse, minimalist character of the venue is matched on the menus, presented on clipboards, listing there’s fourteen types of pizza. Each has a catchy name, like “number one”, “number two”, “number three”- brb, just checking my word count…

Crust breaks out in unpredictable patches of charred-black acne, and raggedy tears of fior de latte reduce to pools of goo

“number four” is next, then “number five”, and indeed “number six”, all the way up to “number fourteen”. I’m intrigued. What do the numbers correspond to? Is there some clandestine numerical hierarchy that we, the customers, aren’t aware of? Is the naming system a wry commentary on the homogeneity and conformity of mass-produced foods? Or, actually, have they just decided to spare the world of another “Nduja think I’m sexy” or “Nduja feel lucky, punk?” or “Nduja they know it’s Christmas time at all?” pun? That one’s not bad actually.

Aside from strict compliance to the naming format, the pizzas themselves are full of individual whim and character and imperfection - not quite round, not quite oblong, they puff and curl and blister during the searing couple of minutes spent in the traditional wood oven. The crust breaks out in unpredictable patches of charred-black acne, and raggedy tears of fior de latte reduce to pools of goo on the surface like toy soldiers on a hot garden patio. 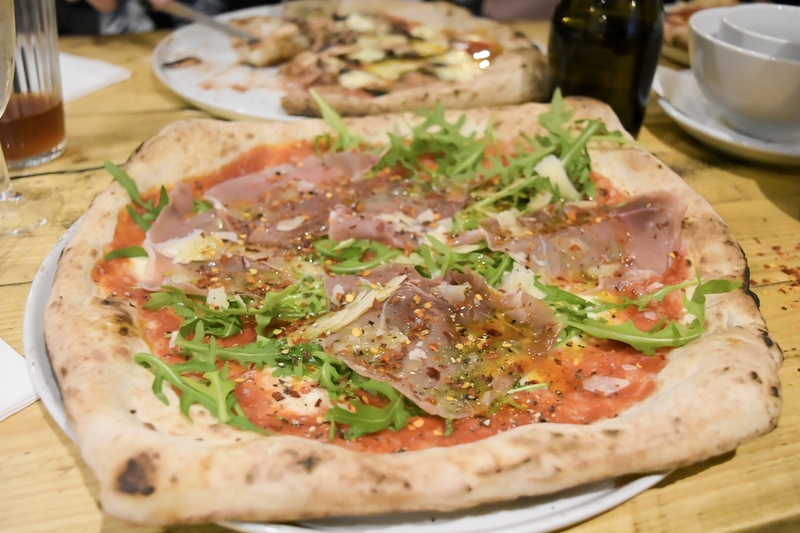 And that’s just the margherita (sorry, “number two”). Topping combinations range from tongue-quivering earth of speck and truffle cream (“number thirteen”) to breezy goats cheese and pesto (“number five”), via the apricity of nduja on milky curds (“number eight”) and a couple of classics. They’re not reinventing the wheel but they’re not precious about nerdy principals of what can and can’t be considered “pizza”. It’s not exactly sophisticated stuff, but each one is elegant in its assured simplicity.

Sides are similarly simple - two obligatory salads, two garlic breads (I never have understood the logic of having, essentially, pizza with a side of pizza, and that’s speaking as somebody who’s used mashed potato as a condiment in the past), but you can get nocellara olives - their oleic gleam giving them the appearance of bright green baubles - and a posh Pepperami to gnaw on, made of cured pork loin. Like all things truffled, the truffle crisps repulse me at first, but I quickly get over myself and discover there’s great fun to be had alternating between mouthfuls of them and gulps of prosecco.

And that's what this place is all about; realising the potential of something cheap and ordinary - like crisps, or recycled wood, or flour and water - and elevating it into something outstanding.