No doubt the long-awaited contemporary Japanese restaurant is 'the' place to be seen, but is it the place to be fed?

Considering it’s name derives from Japanese word for “together”, the forces behind Issho seemed to have very separate ideas for the restaurant in the run-up to its launch.

The new contemporary Japanese restaurant comes from the mind of Ben Orpwood, the young exec chef behind Zuma’s global expansion, and Mayfair’s Sexy Fish. The latter being The Ivy’s sister restaurant, seemingly set up to relieve Chiltern Firehouse of having to serve some of the worst people in London when it became the place to be seen. David Cameron likes it in there.

When I interviewed Ben a few weeks before Issho’s opening he came across almost repentant of his involvement with celeb-hangouts; noting that London dining rooms are “full of people who are there because they’ve got to be there to be involved in a scene, rather than going there for an experience” and that from now on, his restaurants would be “a place for people who are there to enjoy themselves, not because they want to see David Beckham at the next table or they just want to have their photo taken.”

There was definitely no risk of anybody bumping into David Beckham amongst the dignitaries and Dingles.

Try and imagine my surprise then, when at 4pm, just before its official free-bar-and-canapes launch party, I got an email from the future: Issho has hosted a “glittering grand opening”, it read. Attended by “Special VIP guests including the Lord Mayor of Leeds and the cast of Emmerdale”. There would be precision-engineered photo-opps for local press to document the bash and its attendees, including the traditional breaking of a sake barrel, and Caucasian girls in the kind of “geisha-face” that made Austin Powers’ “Fook Yu/Fook Mi” routine seem culturally sensitive.

It hardly screams “focus on the food”. True to their word though, there was definitely no risk of anybody bumping into David Beckham amongst the dignitaries and Dingles. By far the most important person was the Dr Robotnik-moustached barman who ensured our glasses never went empty. 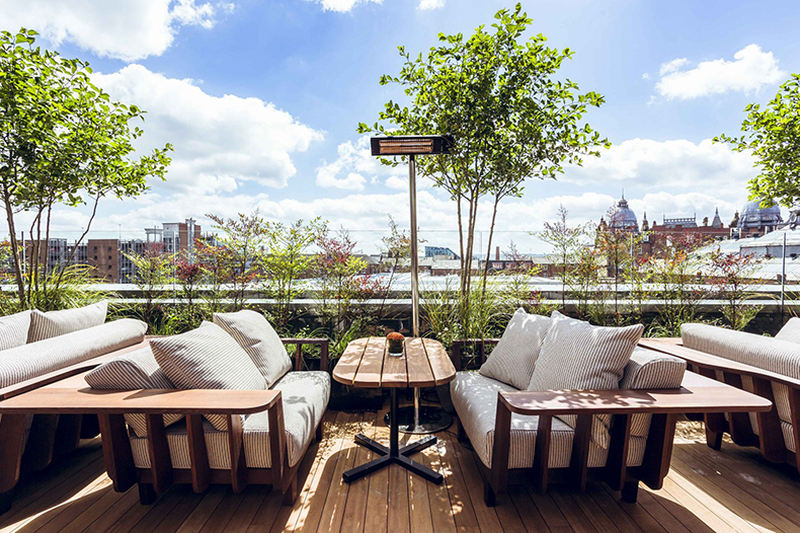 It doesn’t look like a restaurant focused solely on the food (if such an aesthetic exists) with the Marbs-style roof terrace, the glamorous ascension to its entrance - to be met by a gorgeous sculpture suspended from the ceiling - the tables, the bar, and even the walls veneered up like it’s been to Harley Street dental clinic. It’s possesses kind of shock-and-awe grandeur that restaurants often use to signal that the food is secondary to the experience of being there. The free-bar vultures in their best Zara gear didn’t look like the target audience skewers of duck hearts, or slices of unagi - freshwater eel - barbecued until charred on one side with the skin peeling off like paint from an old shed on the other, then served room temperature.

A week later I’m sat at the bar overlooking the open kitchen, watching the chefs cook just that. Tiered grills that look like sawn-off shopping trolleys and ad-hoc tin-foil trays would look more at home in a trap-house kitchen than an upmarket restaurant, but here they’re being used to barbecue sticky, blackened chicken wings, and lamb cutlets slick with barley miso. The chefs look to be having almost as much fun cooking it all as I’m having eating it. 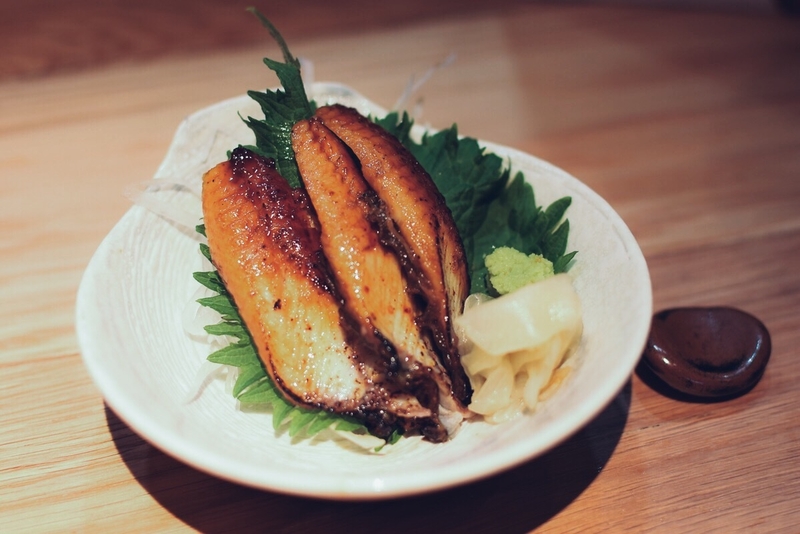 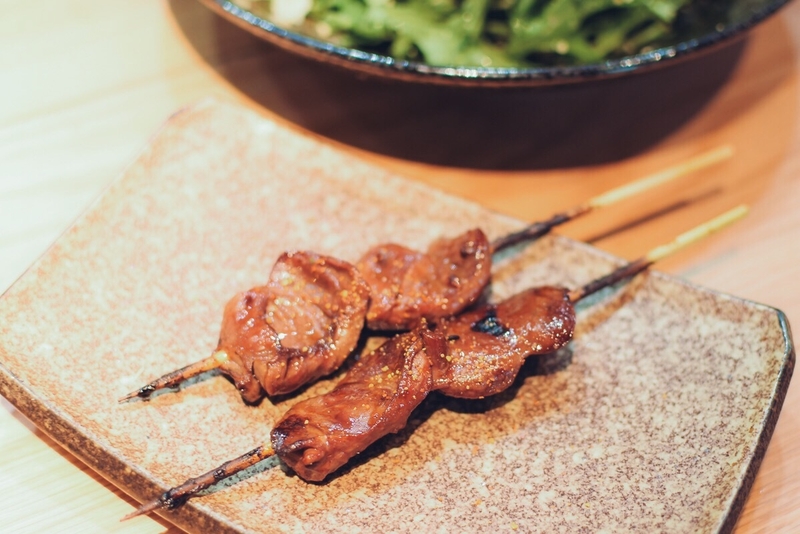 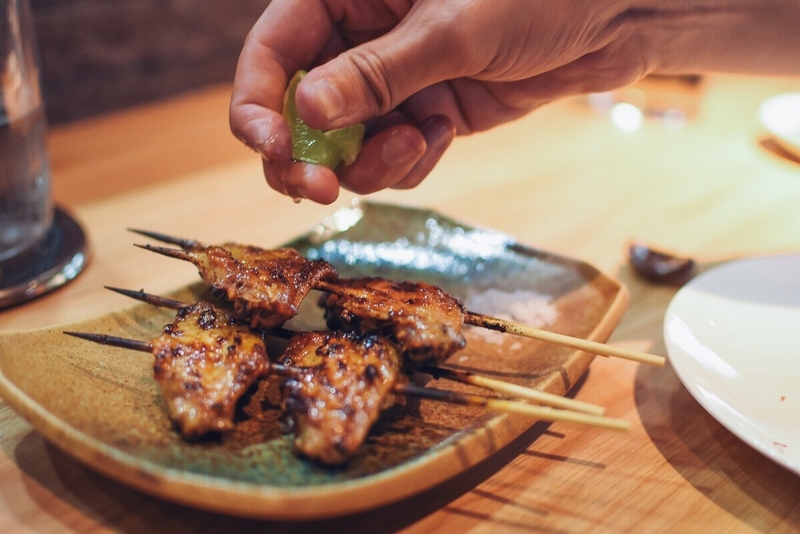 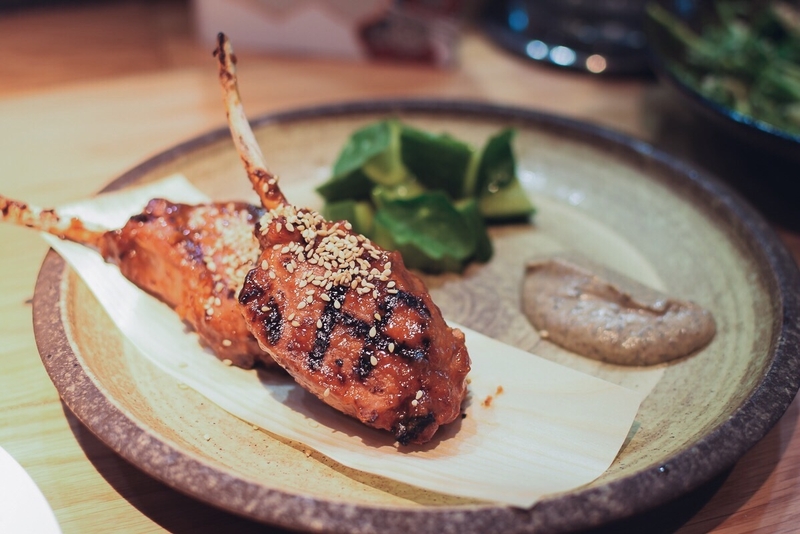 Including desserts (the best of which is a rhubarb crumble with apple-sake sorbet, FYI) the menu’s split up into eleven sections divided by size and cooking method: snacks, meat from the grill, skewers from the grill, sushi rolls, sashimi and so on.

It’s all pretty reasonably priced as well: starting at £3.50 for those must-eat duck hearts and averaging at around seven quid for a plate, of which they recommend four per person. Of course, being a D&D gaff, there’s sections for men who want to show off the size of their expense account or compensate for the size of something else: £38 for 100g of wagyu, £130 for a bottle of Sake, but your money’s better spent elsewhere on the menu. 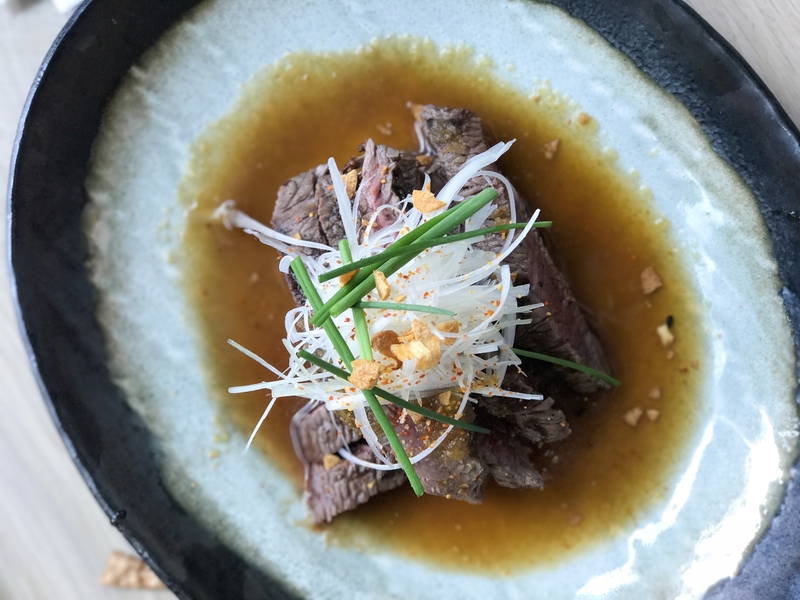 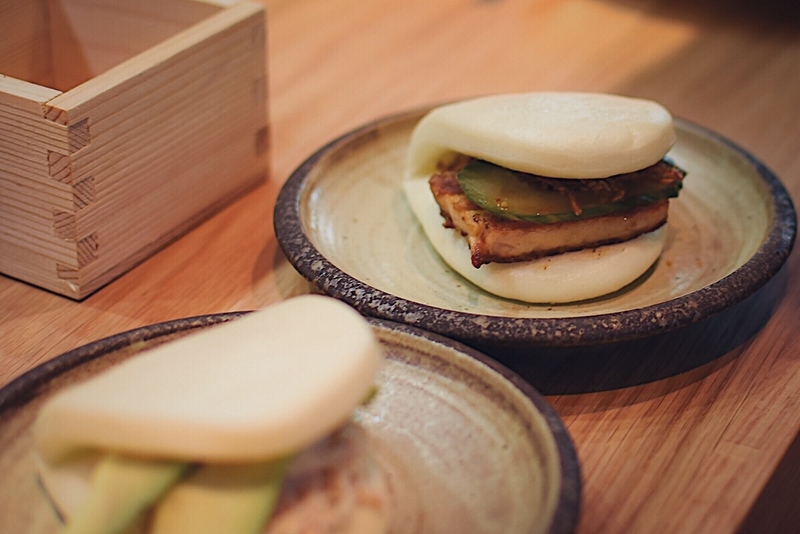 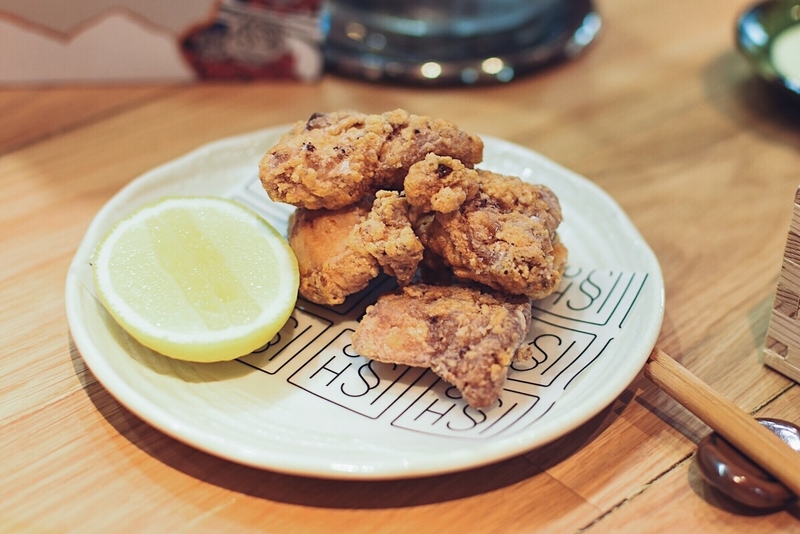 Sampling at least one dish from every section, the only let down is the bao, which have the texture of pick & mix fried eggs. Whether that’s down to a regional variation, or they’re one of the restaurant’s signature adaptations of a traditional dish I’m not sure, but there’s plenty of other stuff to keep you occupied, regardless.

Make sure you get the maguro nigiri: hefty yet precise slices of steely yellowfin tuna. If you’re into that try the seared salmon, served on swirls of wasabi-leaf dressing, but be warned that the near-caustic pickled apple isn’t for everybody. Definitely get the tomato salad you’ve no doubt heard about already: blanched tomatoes dressed in sherry vinegar and served on top of a sesame’d, whipped tofu. It’s a hummus/caprese pile-up that really shouldn’t work, comes dangerously close to not working, but keeps you coming back for more. 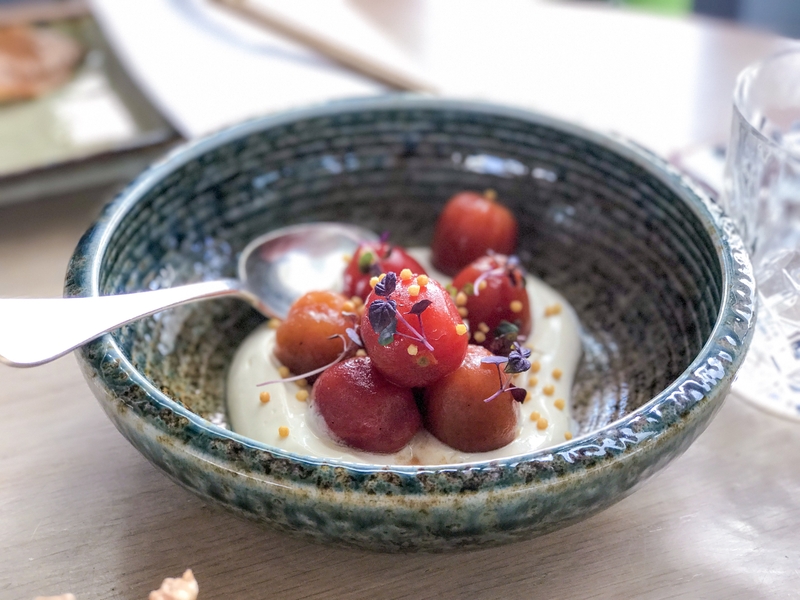 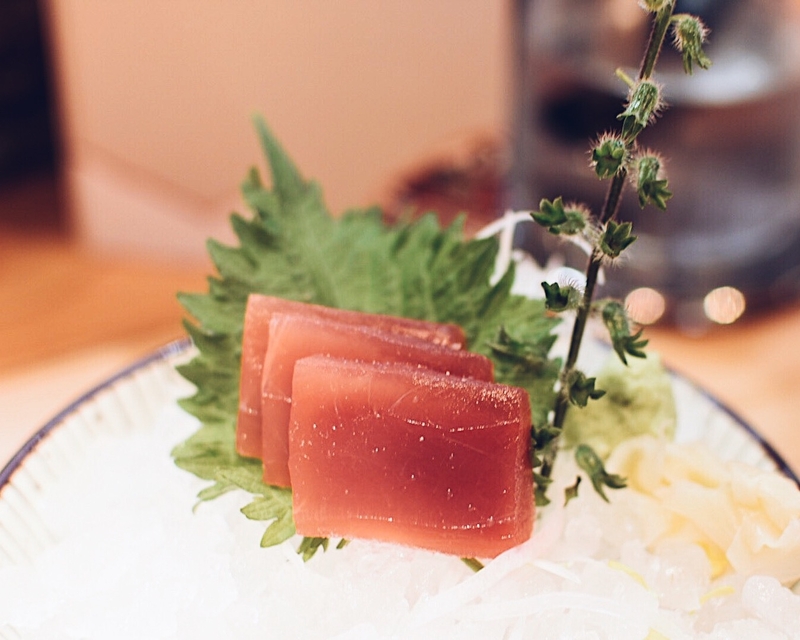 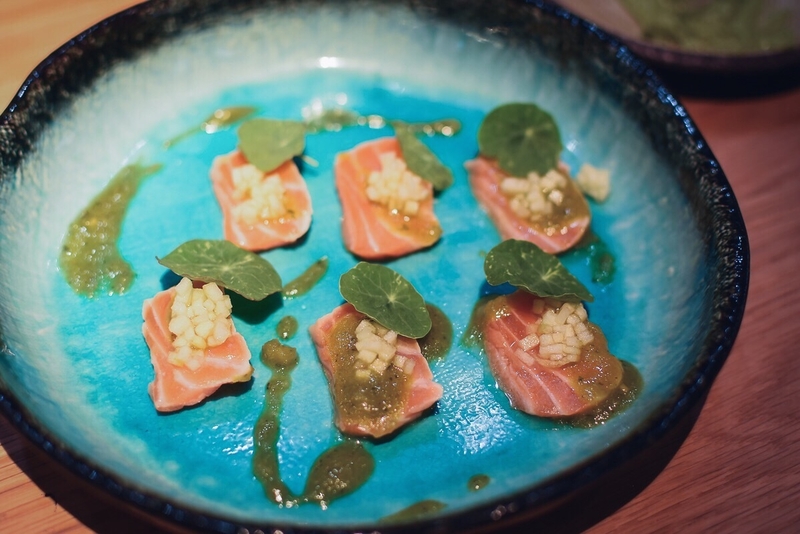 Even the house salad of peppy mizuna leaves and mirin-dressed pea tops practically erupts from its bowl with spring-loaded freshness, like freeing a bound-up christmas tree from its netting. It’s the kind of think you shovel down and practically see a health-meter above your head replenishing.

Of course they have to get salads and protein right: just look at the clientele of that launch party. While that might have been an excuse for would-be Love Island conscripts to get their photo taken in this month’s Hot New Opening™, it’s got the food to fall back on once the next new place rolls into town (Though D&D don’t need to worry too much about that - their next venture East 59th is due to open in July, just downstairs from Issho).

Any Japanophile will preach that the best eating experiences in the country are the ones stumbled upon in neon-lit alleyways behind curtained doorways. Issho doesn’t have that kind of dingey charm. They’ve got a roof terrace. You might find yourself shouting about it from there. 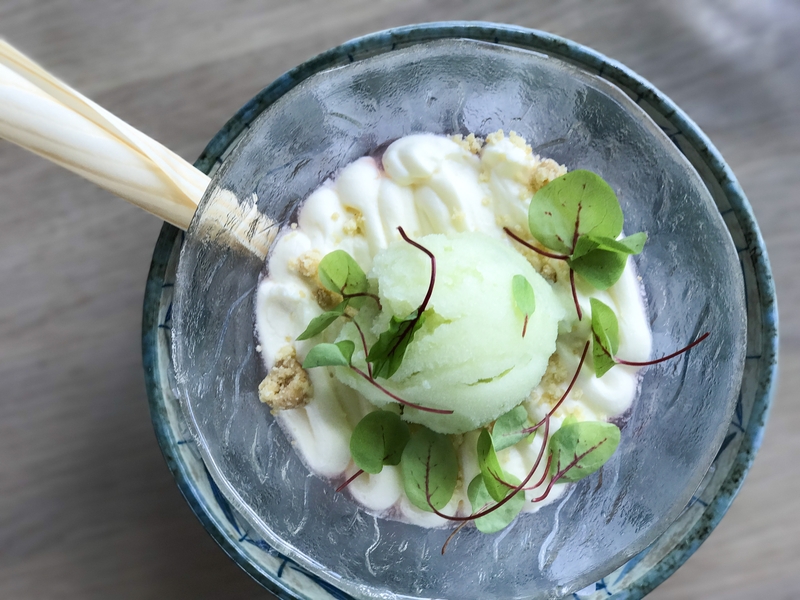 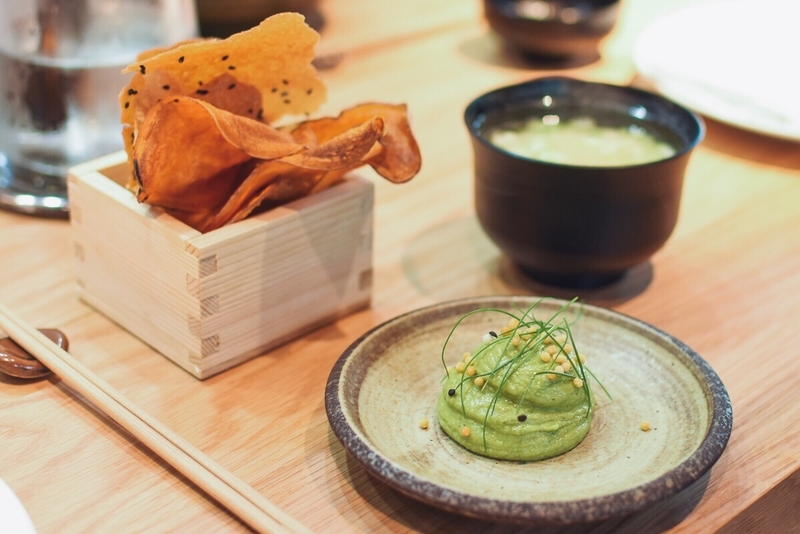 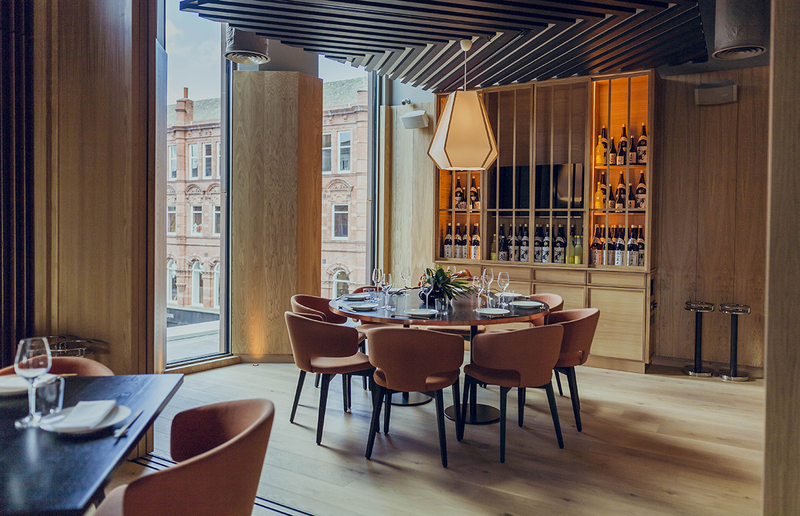