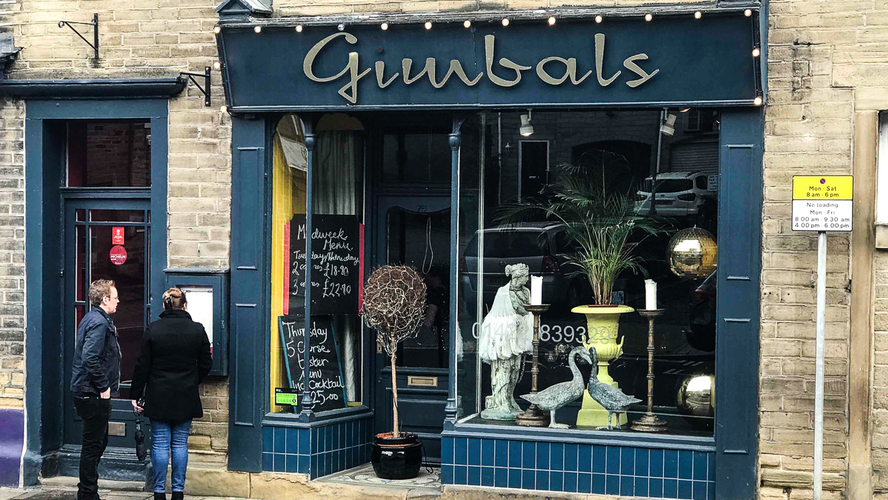 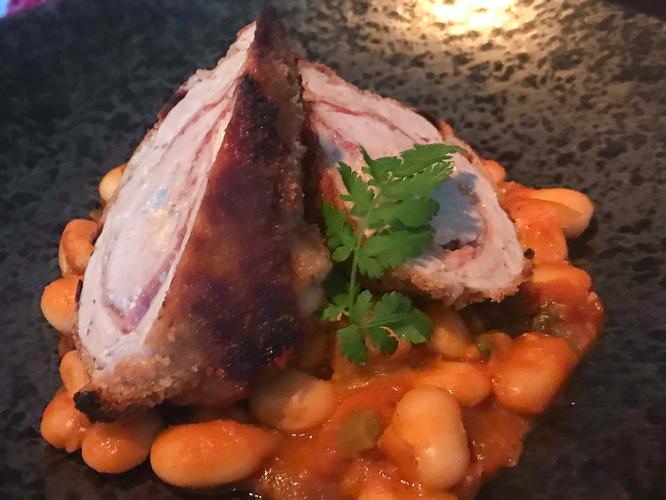 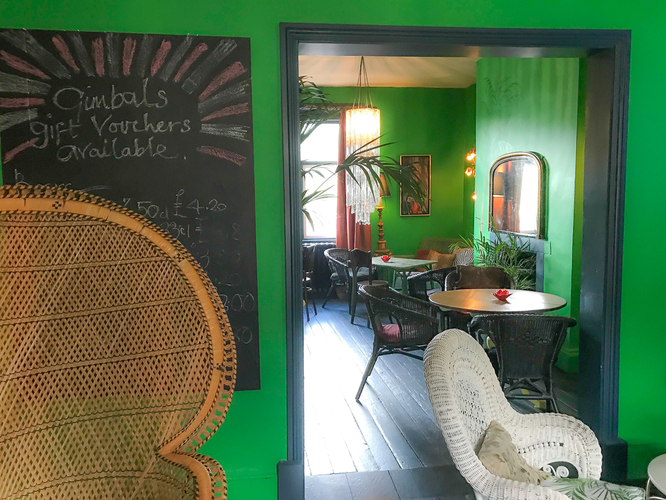 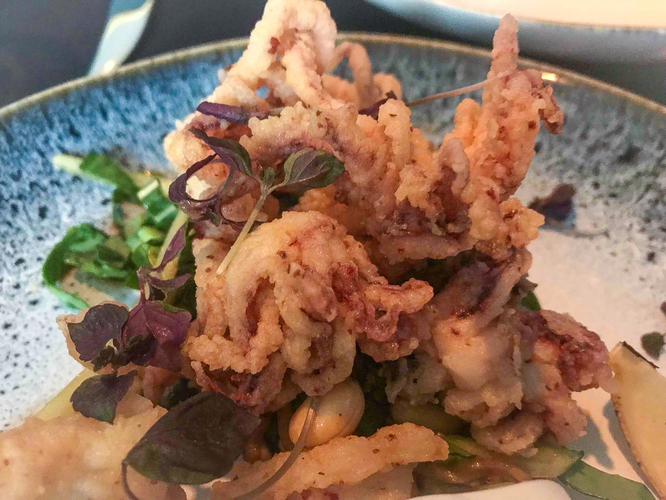 "Sowerby Bridge, so full of surprises" - through the looking glass at a quaint neighbourhood bistro

Jack by the hedge? A herb past its best apparently, but the sweet cicely is still sprightly down on the banks of the Calder. Hence the freshly foraged sprigs adding their mild aniseed tang to a Flamenquin pork special across the table. Just one of many surprises in the Alice Through The Looking Glass parallel universe of Gimbals.

In a world where chefs’ blood pressure goes through the roof as they strive to heighten their profile on the Great British Menu, and there's a breathless rollout of concepts looting the world’s ‘street food’, it’s a miracle for a small mill town restaurant to stay happily under the radar over two decades with no slackening of enthusiasm or quality - and an utterly delightful rediscovery for us.

Welcome to Gimbals, run by husband and wife team Simon and Janet Baker. As chef, he constantly reinvents a playful, eclectic menu while she creates a decor that soars beyond quirky, does warm front of house and scours the woods for all that edible greenery.

Our evening begins on a herbal note, guided by Janet. We’ve negotiated the stairs to the first floor bar, running the gauntlet of gargantuan gilt mirrors, flags, disco balls and random kitsch objects. From our all-embracing chaise longue we gaze across busy Wharf Street at the much-expanded local Indian, all giant naans on hooks and a squadron of chandeliers, before paying serious attention to Gimbals’ impressive gin list.

Here against the backdrop of Gimbals’ own - more lavish - chandeliers, and a massive snowflake illumination rescued from a warehouse in Blackpool, Janet talks us through the delights of Hebridean sugar kelp. Well, we did ask.

Hand-harvested Hebridean kelp is signature botanical in the Isle of Harris gin at the top of the list, which gives you the option of sprinkling extra sugar kelp aromatic water into your G&T. So I did. It was bizarrely lovely.

Downstairs in the restaurant proper, where various ceramic birds flutter across the walls and over the chairs and tables jumble sale job lot, there’s a merry buzz from gaggles of regulars – quite un-Big City. We choose both our mains from the specials list – the aforementioned Flamenquin (£18.90), Simon’s version of a pork loin, Manchego and Serrano ham crumbed roulade that’s a Cordoban speciality, and for me sauteed East Coast (presumably of Yorkshire) stone bass fillet (£20).

The Flamenquin is served with a ragout of spicy tomato butterbeans, which mitigates against a slight porcine dryness; my bright, juicy bass comes with the crisp of its seared skin and the crunch of wild sprue asparagus. There’s ‘wayside’ garlic in there but it’s the delicate melange of ginger, lime and green onion that adds the wow factor.

A perfect match is our tart, melony 12.5 per cent Albarino (£24.20) called Pedro after a 15th century Galician knight, who credited his battlefield victories to being an early riser. My secret, too.

A Gimbal, in case you were wondering, is a pivoted device for keeping an instrument such as a compass or chronometer horizontal in a moving vessel or aircraft. And there was me imagining a small cicely gathering woodland hobbit.

With the mains a large dish to share of assorted al dente veg, root and green, may offer added value but is superfluous. Especially after the extra starter that crept in.

My daughter had cooed over her starter of fried Camembert and purple figs (£6), sumptuously tangled with sour cherries, rosemary roasted pine kernels, curly endive with elderly port dressing, but my wild St George and Portobello mushroom ragout on truffle buttered polenta £7) had a disconcerting grittiness. Probably just cracked pepper but the seeds of doubt were sown.

A chef friend had insisted I go for the pink peppercorn crispy squid and I’d dithered before fixing on fungus. “You may as well have the squid, too, between courses,” insisted our host (it turned out to be her treat – she didn’t charge on the bill).

All tiny curly tentacles subtly tempura’d, the squid was star of the whole show for £6.50. Pak choy, peanuts, sesame soy and a fiery ginger dressing in perfect balance. Elsewhere on the menu there are Persian and North African influences on show. You sense a chef having fun with his palette of spices and herbs.

There’s a great generosity in evidence. Witness the Gimbals £7.50 ’Petite Selection’ of three puds. Not so reet petite, really. The apple and Pedro Ximenez raisin turnover with chantilly  cream was a dessert in itself. It was a mite flabby for my liking but a wedge of sharp lemon tart with headily perfumed alphonso mango sorbet was sublime, and the chocolate and espresso brownie with salted caramel ice cream not far behind.

So why did we also order the (just £5 and gloriously moreish) sticky toffee pudding with toffee sauce and cream? Because we could do – and we were increasingly feeling like guests of honour at the Mad Hatter’s Tea Party. “Pass the sugar kelp to the March Hare, if you would, little Gimbal.”

Afterwards, a magic carpet not forthcoming, waiting at Sowerby Bridge Station for a train out, we strayed into its steam-themed, real ale micro bar, the Jubilee Refreshment Rooms, to discover a poster for an upcoming Subbuteo competition based on a replay of the FA Challenge Cup of 1879-90. Sowerby Bridge, so full of surprises. Yes, we will be turning out as Clapham Rovers and celebrating victory at Gimbals.