TGI Friday’s burst onto British shores in 1985, bringing with it a crystallized version of Americana; cocktails, prop motorcycles that you absolutely are not allowed sit on, and service with the enthusiasm born of a tipping culture where waiting staff have to perform like Butlins Redcoats to get their take-home pay up to the heady heights of minimum wage. The result was a restaurant that claimed to be the place “where every day is Friday”.

By contrast, George’s Great British Kitchen - with its decor of pastel-painted beach-hut booths, and nautical-striped bunting - is pure Little England; it makes you think of seaside postcards and knackered old piers like Margate, or Morgan. In here, every day could be any day, as long as it’s a particularly brisk Bank Holiday in 1936.

This seaside theme is mirrored in the menu where there’s plenty of fish, and even more codswallop - almost every page features bold red text butting in to tell you that things are blooming spiffing, or ruddy marvelous, or any manner of words that nobody actually uses outside of racy captions on vintage-photo greetings cards. Credit where it’s due, though, the variety of seafood is impressive for a restaurant in traditionally thalassophobic Leeds. 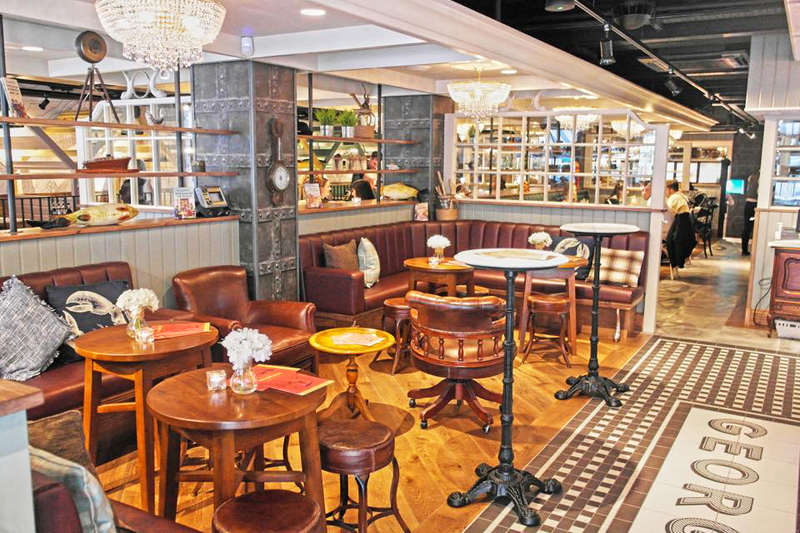 As well as listing several types of fish, the menu serves as a textbook on British colonialism, inviting us to guess which part of the Empire inspired each dish. It’s usually India, with dishes like fish pakora, and cod in onion bhaji batter. Weirdly, there are a lot of inclusions from places like Japan (teriyaki fishcake) and Mexico (soft tacos) - places that we never quite got round to colonising, the poor bloody buggers.

Lemon sole is one such dish - arriving in a chilli and coriander batter, with a charred pineapple ring and lashings and lashings of red curry sauce, like in Enid Blyton’s unreleased “Five Go Find Themselves On Gap Year”. It’s a deconstructed version of massaman which is every bit as good as you’d get in a cheap Thai canteen, but who’s going to “George’s Great British Kitchen” to satiate their hunger for coconut curry? 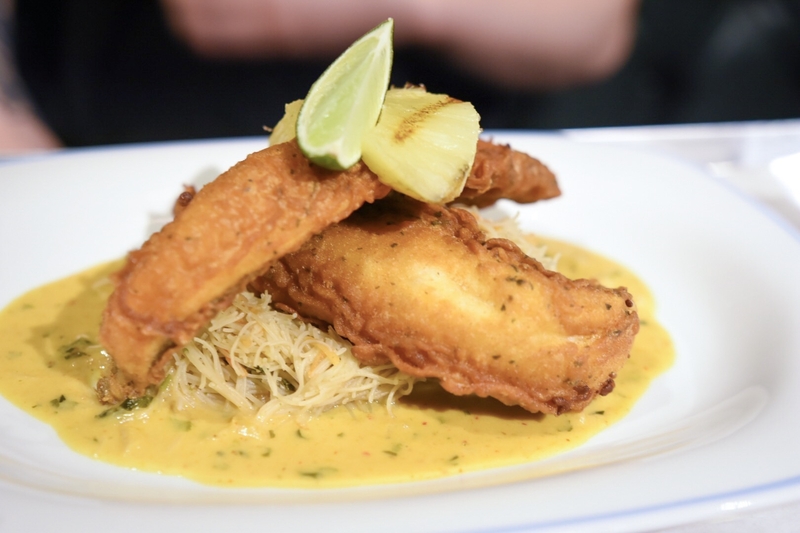 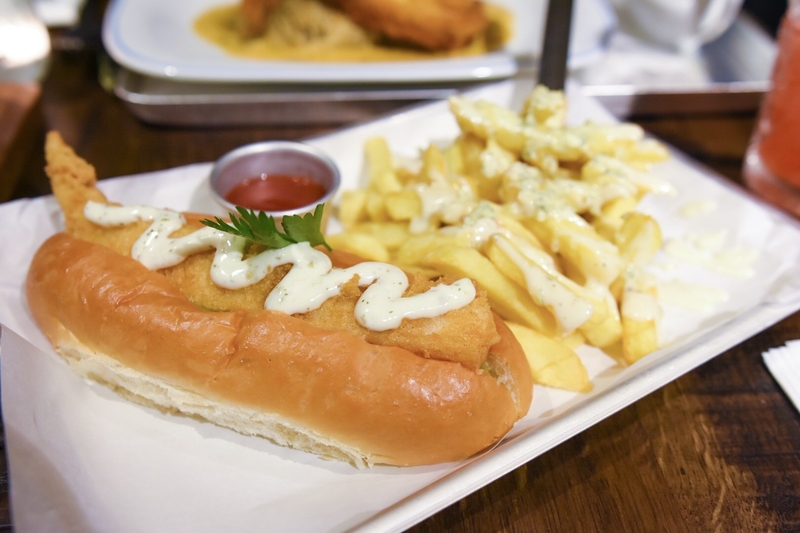 “Cod Dog” - a hot dog/fish finger butty hybrid - is wonderfully, patriotically bland. A pillowy bun and overcooked cod goujon have the structural integrity of a trail of white smoke coming out the exhaust pipe of an RAF Red Arrow. They collapse under the force of their own weight, like an alarming metaphor for post-Brexit British agriculture. It comes with some pretty decent chips covered in stilton sauce, mind you.

It’s not all fish: Mushy pea and ham fritters come in a gorgeous seaside-chippy batter, but are drenched in a wasabi mayo with all the grace of an EDL march tearing through your town centre. A scotch egg comes closest to eliciting a misty-eyed rendition of the national anthem - served warm enough that its sausage meat glistens just-so, surrounding a quail’s egg with a runny yolk as bright as a buttercup - but the eye-widening £6 price-tag might just make your monocle fall out, old chap. 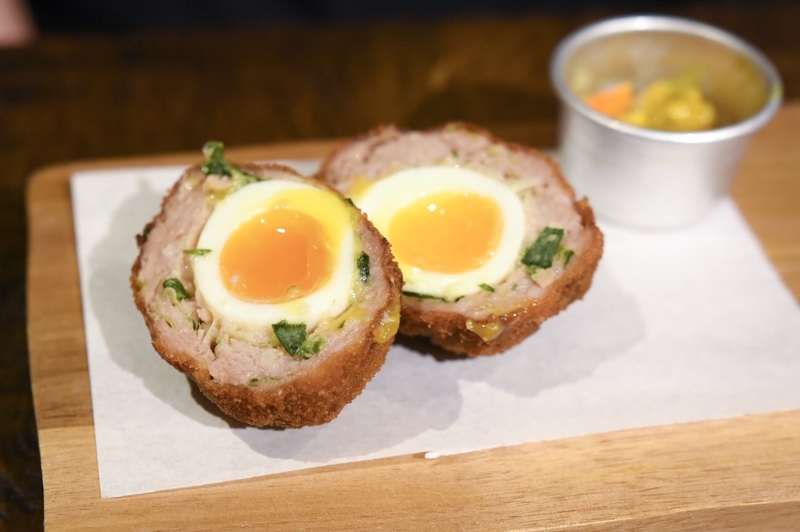 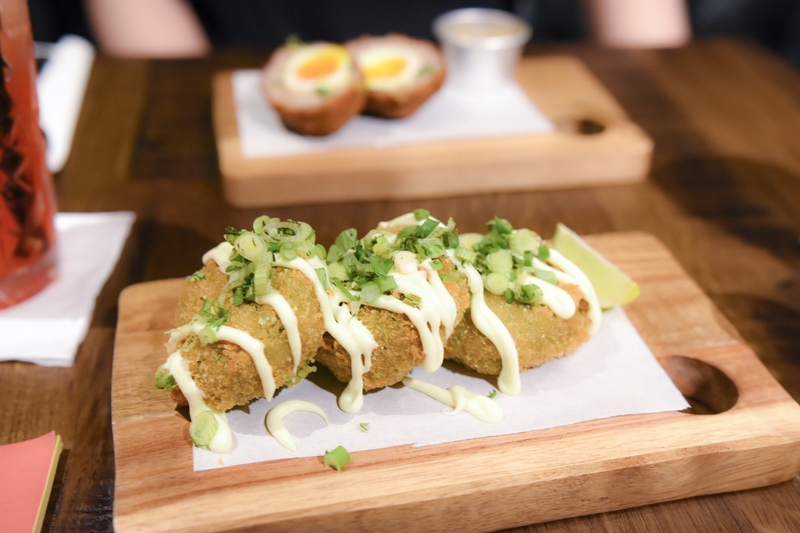 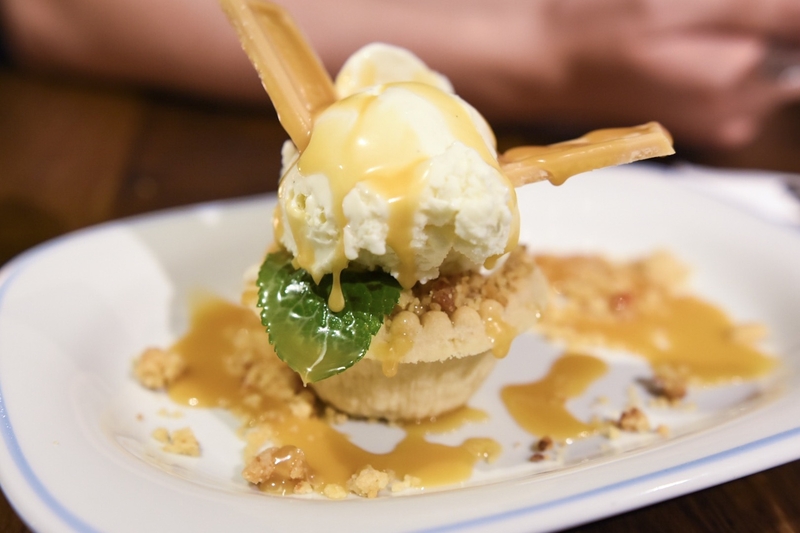 Puddings aren’t as “Splendid!” as the menu claims. Cadbury fudge fingers deep-fried in a panko breadcrumb sound as appealing as National Service, so we go for a Apple & Caramac “Higgledy piggledy crumble pie” which is achingly sweet. At least it wasn’t the platter of ice cream, donuts, and candy-floss shared by the first date on the table next to us, whose second date will presumably be on an NHS dentist waiting list.

You can understand why George’s is so popular at this moment in time. This is a colourful, cheeky, seaside postcard version of Britishness; a blighty populated by Wallace and Gromit and Greengrass from Heartbeat, rather than Johnny foreigner and Daniel Blake. 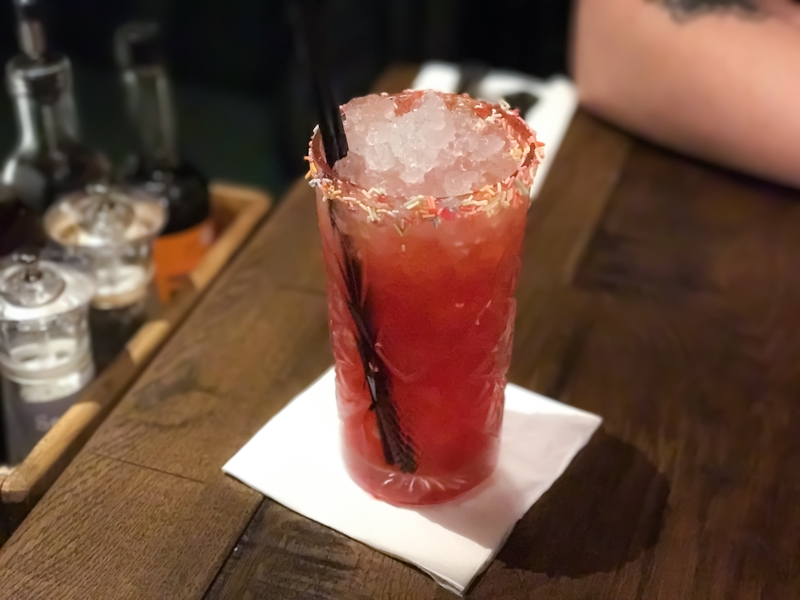 Nostalgia’s an addictive drug, and this is a restaurant that serves cocktails based on tuck shop sweeties and has illustrations of Jane Austen taking a selfie with Winston Churchill on the menu - it must be tough to keep a stiff upper lip with a tongue so firmly in your cheek.

As for the actual food though, I couldn’t find too much to complain about - and that’s probably the least genuinely British thing I can imagine.

All scored reviews are unannounced, impartial, paid for by Confidential and completely independent of any commercial relationship. Venues are rated against the best examples of their type.