We look at the benefits - and complications - of the Northern Forest

A green sash of forest will be tied around the waist of the north - stretching across from Liverpool to Hull and connecting Chester, Manchester, Leeds and Sheffield along the way - if an ambitious plan can get the backing it needs.

Imagine a tranquil glade of trees stretching as far as the eye can see, sanctuary to wildlife; cleaning the air and protecting our homes, providing work and health benefits, all on our doorsteps.

The ‘Northern Forest' will see 50 million trees planted across the region over 25 years in order to harness the environmental, health and economic benefits of forests. The plan will connect four community forests – the Mersey Forest, Manchester City of Trees, the Leeds White Rose Forest and the HEYWoods Project - with green infrastructure and woodland created in and around major urban centres in the North.

If we are to tackle the climate and biodiversity crises the world faces, internationally significant projects like the Northern Forest must be at the forefront of bold, ambitious domestic thinking

If the Northern Forest strategy can be implemented it seems that will truly change the face of the North. So far, the Government has pledged £5.7 million of the £500 million needed to fully realise the project. Theresa May supported the plan when it was initially launched in 2018 but it remains to be seen whether her successor will follow through on the Government’s initial promises.

The campaign behind the plan has estimated that the initiative will contribute £2.5 billion to the area – representing a five-fold return on investment.

MPs and councillors from across the north signed an open letter to the Prime Minister, asking him to commit to the plan. Signatories include MPs Kate Green, James Frith, Debbie Abrahams, Sir Graham Brady, Angela Eagle, Hilary Benn and Luciana Berger, plus prominent political figures such as Metro Mayors Steve Rotherham and Andy Burnham, and Leader of Leeds Council Judith Blake. Around 120 northern leaders signed the letter in total.

The letter invites Mr. Johnson to 'come and see the project for yourself, to plant a tree and hear more from the Woodland Trust and local community forests that are spearheading the initiative.'

“We are bringing forward an action plan which will explain how Manchester will achieve this ambitious target.

“The Northern Forest initiative, which would help absorb millions of tonnes of carbon, is entirely complementary to that wider goal and something we wholeheartedly endorse.”

Proud to support the #NorthernForest 🌳 initiative alongside 120 political leaders from across the North of England.

Darren Moorcroft, CEO of the Woodland Trust, said: “The Northern Forest represents the green lungs of the Northern Powerhouse. This pioneering project spearheaded by Woodland Trust and the Community Forests will deliver millions of new trees planted, and billions of pounds worth of economic, social and environmental benefits to the region.

“If we are to tackle the climate and biodiversity crises the world faces, internationally significant projects like the Northern Forest must be at the forefront of bold, ambitious domestic thinking.”

Across England, only 10% of land area is covered by woodland. In Scotland that stands at 18%, and in France, Germany and Spain it is 31%, 33% and 37% respectively. In the North, the figures are much worse, at only 7.6%. The Northern Forest is not just a nice idea – it is badly needed. 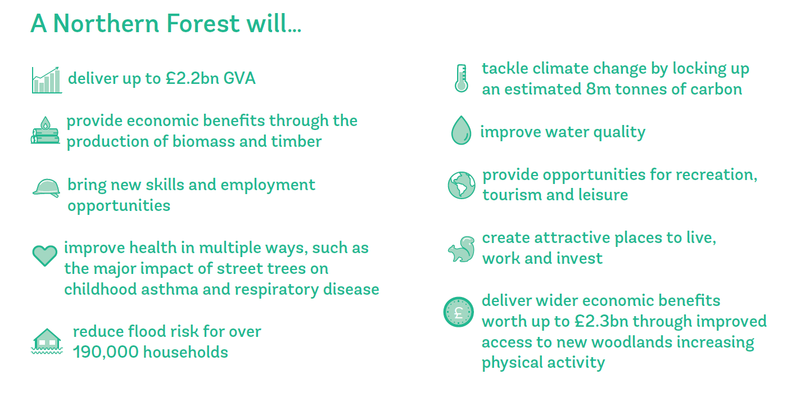 UK public policy is to increase woodland cover to 12% by 2060, while the Climate Change Committee's land use report indicates that forest cover in the UK would need to increase to 19% to meet climate change objectives by 2050.

'Natural capital' is the term for understanding how natural resources such as forests contribute services to the economy. According to a recent Woodland Trust report, the economic contribution of woodlands to the UK economy comes in at around £270bn.

Other natural capital benefits outlined in the Northern Forest manifesto include generating income from forestry and biomass, creating a carbon sink to help with climate change, preventing flooding, numerous mental and physical and health benefits, leisure and tourism opportunities and the creation of new jobs.

Interestingly, the prospectus for the Northern Forest focuses on the added value trees can bring to property, as well as the potential for increased productivity from workers who are surrounded by natural beauty. For some, the Northern Forest is explicitly linked with the Northern Powerhouse, with nature complementing rather than opposing economic success.

Of course, as with any grand plan, the devil is in the detail. The plans so far are unclear on how they will incorporate existing ancient woodlands, for example, which have the richest biodiversity. For there to be a genuinely significant impact on biodiversity and animal populations the community forests have to linked up – exactly as outlined in the plan. But things do already exist in the areas between the forests, most notably towns, business parks and farms. So it is not just a case of planting trees but trying to work out how and where to move existing infrastructure, or efficiently work around them, to make sure the forest meets its aims.

The type of trees planted is also an important consideration. To maximise economic benefit from agro-forestry, quick-growing conifers provide most return, but it is the slower-growing broadleaf trees that will deliver climate benefits and prevent flooding, as well as being more aesthetically pleasing from the point of view of housing and leisure activities. 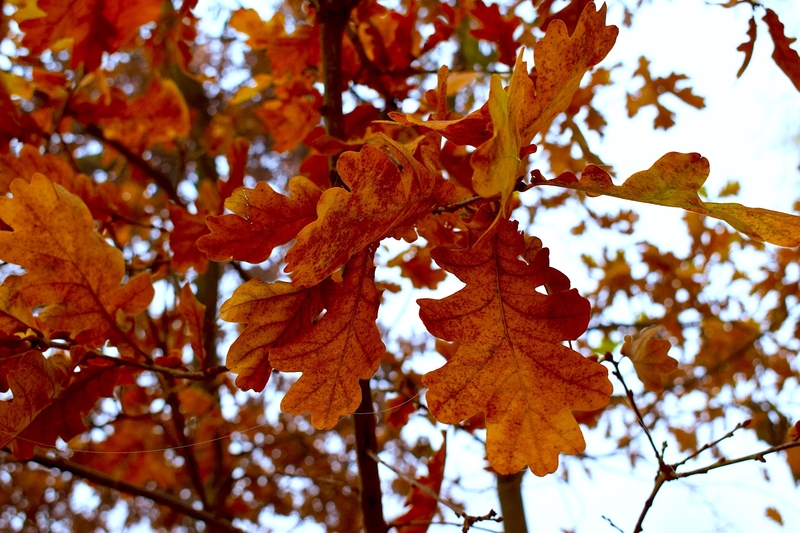 Finally, many smaller patches of woodland exist because the farmers that own them are paid subsidies by the EU to maintain them, subsidies that will cease as soon as Brexit occurs. The Northern Forest needs to take into account that these private patches of woodland may soon disappear. A related worry is that the promise of new trees on the horizon means that people will not be as inclined to take care of the trees we already have, which are much more valuable than newly planted trees.

Perhaps the most disappointing element of the project is that it is not reflected at inner-city level. The fact that Dan Jarvis, the mayor of Sheffield, is coordinating the project, may surprise some as Sheffield has famously cut down many of its beautiful inner-city trees in recent years, much to residents’ dismay. In Manchester, residents of The Redbricks in Hulme protested council plans which saw 70-year-old trees cut down to make ways for cars.

On a national level, it is not clear how the plan dovetails with national policies on HS2, which currently endangers at least 35 ancient woodlands, or fracking.

Nevertheless, the Northern Forest is an inspiring idea. The image of great swathes of woodland captures imaginations and the economic case shows that trees are not just pretty decorations but an essential part of the country’s infrastructure.

Can you plant your own bit of the Northern Forest?

Volunteers are being urged to do their bit to stop the climate emergency by signing up for the biggest mass tree-planting campaign in the UK’s history. The Big Climate Fightback will host events in Wakefield, Derbyshire and Smithills in Bolton on 30th of November, officially the start of tree-planting season.

If you are thinking of planting a tree in your own garden there are several factors to take into consideration. The first is space: a tree should not be grown too close to houses, underground drains or overhead power lines. It is also important to think about what kind of tree – smaller trees that may be suitable for gardens include fruit trees and rowans. Trees should have been grown from seed in Britain to avoid importing disease. Finally remember that trees need aftercare too.

If you don’t have space remember you need permission from the council plant trees elsewhere. Places to consider are hospitals, schools or community centres, so contact local community groups to see if they are already co-ordinating an effort in these spots. The Woodland Trust has free planting packs available for groups.

You can read the full proposal for a Northern Forest here.

Calories on menus: what does it achieve?
What you say
Read Next
Web Design Manchester MadeByShape