"I don't want this to be an obituary" - Restaurant review: Norse, Harrogate

Despite what Kitchen Nightmares might have you believe, restaurants can’t just dawdle along serving three customers a night for five years and get themselves $700,000 in the hole while waiting for some deus ex machina with blonde highlights to come along and bail them out with a lick of paint and an encouraging “come on big boy”. Your favourite restaurant, like any other business, will close down if it doesn’t make money.

It’s hardly advanced economic theory, and yet a few weeks ago Food & Drink Twitter was shaken by a stark honest article written by Norse owner Paul Rawlinson, saying just that. The industry standard is to boast and self-aggrandise like a threatened WWF wrestler, yet here was a restaurant owner laying their cards on the table: use us or lose us.

Norse is everything you’d want your restaurant to be, the teacher’s pet that’s also accepted by the cool kids

From the outside, Norse is everything you’d want your restaurant to be, the teacher’s pet that’s also accepted by the cool kids: glowing broadsheet reviews, recommendations from Michelin and the Good Food Guide, a wildly successful Kickstarter helping them move into a slick new venue - but a couple of financially underwhelming months in what should have been the most lucrative time of year has put the whole restaurant in serious jeopardy. And that’s all it takes.

Paul has been outspoken in the past about the trials and tribulations of being an independent restaurateur, and rather than feeling entitled to custom through the virtue of being the underdog or indignantly suggesting that people just “don’t get” what they do, he’s faces the challenges head-on and confronted truths and honesty, however uncomfortable.

There was an acceptance of responsibility and the modesty to adapt: “Nordic influenced food” isn’t the most accessible or illustrative of descriptions: “we have struggled to break the misconception that our menu is primarily the raw fish and meatballs of Scandinavian stereotype” Paul says, so the new tagline is “Modern food using Yorkshire produce”. Small plates, outside the echo chamber of the cosmopolitan foodies, are still a “new thing”. That’s a barrier to entry, so they’re gone. In their place, a trad a la carte format of starters, mains, and desserts. There’s also a more-than-reasonable early menu, priced at £18 for 2 courses, £22 for 3. 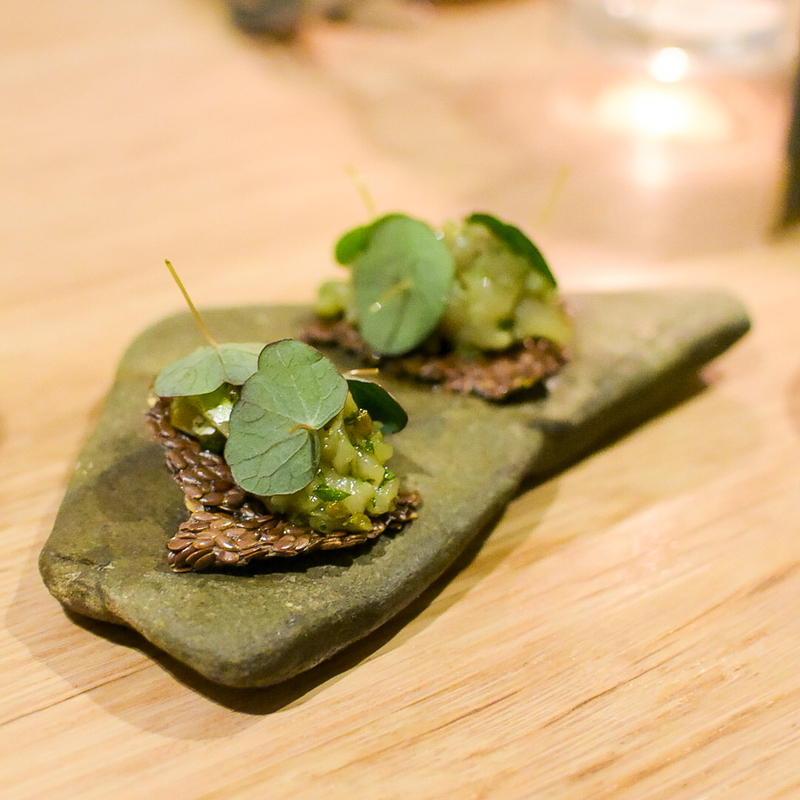 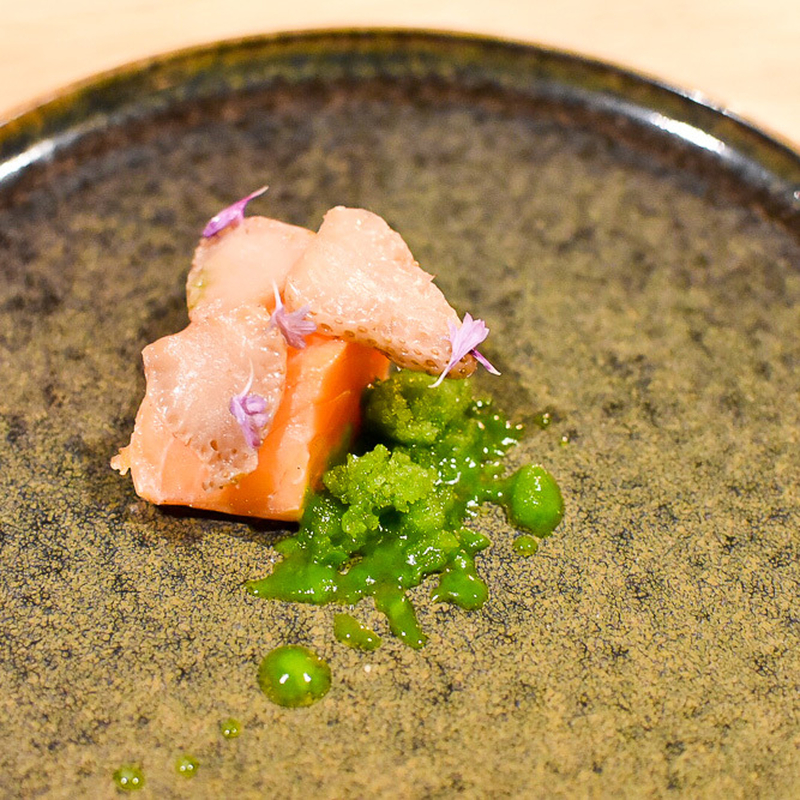 So with these big changes in mind, we go for the...er, tasting menu. Which is still offered in its current format, at its current price of £59. A ten courses mixed-Kanken of Scandi stereotypes right from the off, in the form of three bitesize statements of intent from the kitchen.

Raw fish? Check - sea trout comes on brittle shard of huddled linseed. A pickling grants piquance as well as posterity to green strawberries, they’re served alongside a very Fine Dining™ tarragon sorbet, and mackerel. The best of them, crisp nuggets filled with the murk of fatty lamb then topped with a cranberry, will be a familiar combination to anybody who’s smothered lingonberry sauce over a pot of meatballs after buying a KALLAX and eight miniature cacti. 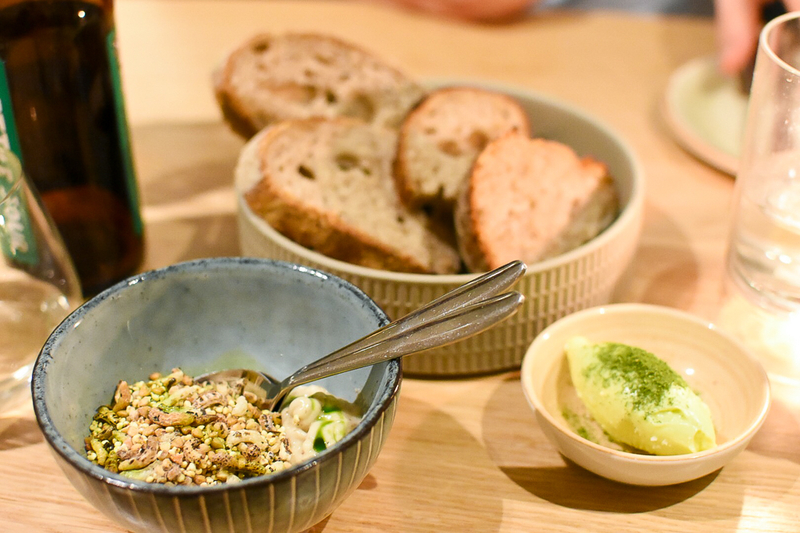 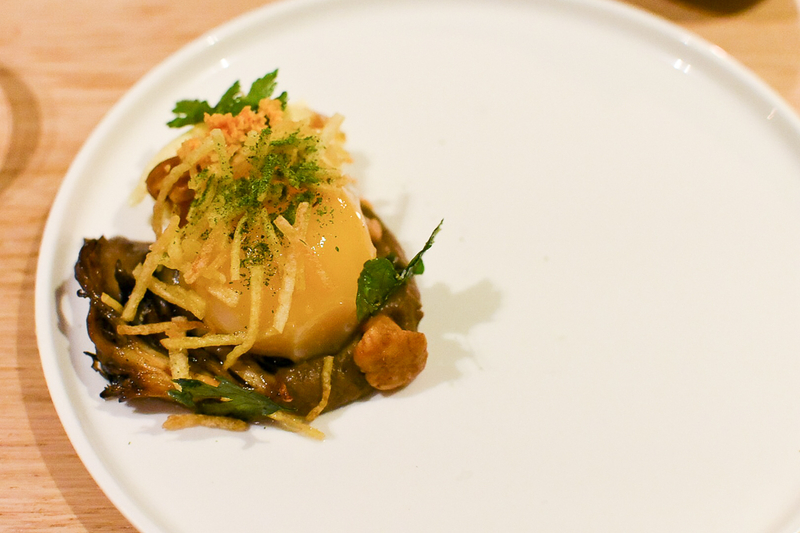 There’s very good bread, even better butter, and an inspired bowl of grains blistered and popped to various degrees and crisp and crunch to sprinkle on top like Pizza Hut’s ice cream factory for adults. It’s served as a course of its own, rather than an accessory the four “proper” courses to follow - shame, it would’ve come in handy to mop up all evidence of the first course; an exposé into the moodier side of mother nature, full of miso and mushroom and an almost palpable must.

On top of it is the sunniest looking duck egg yolk which reveals the strangest texture when breached: cured over several hours into a state of liquid and solid at once, like when an astronaut eats a bit of their drink in zero gravity. My finger makes do in the absence of bread. 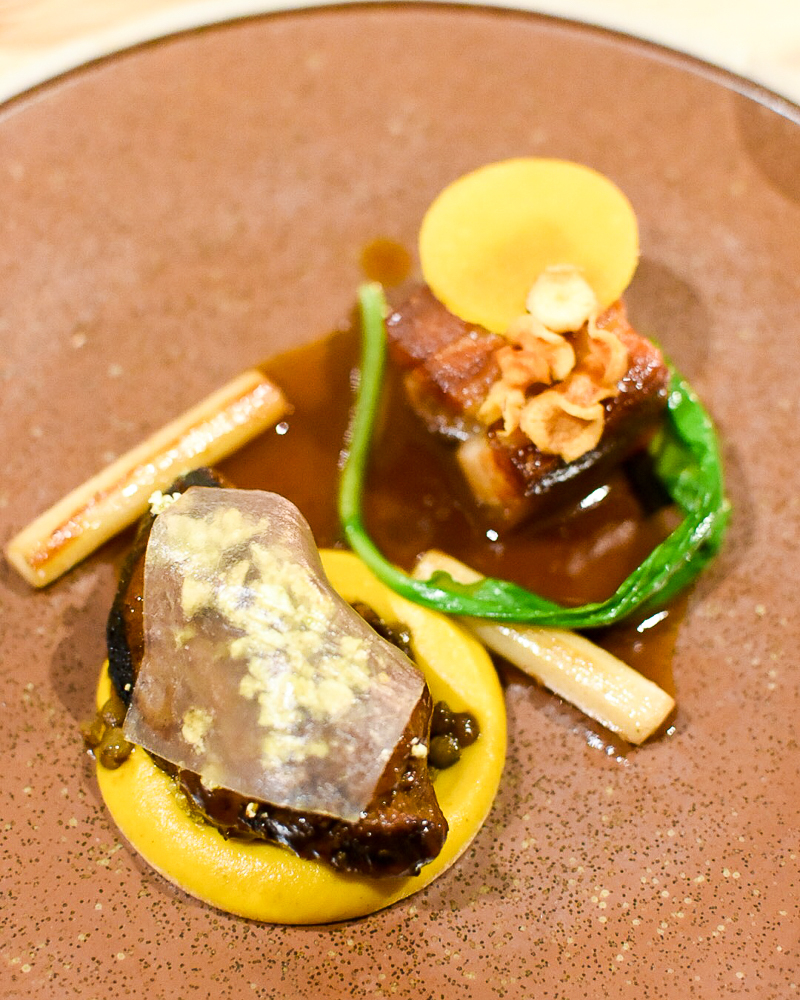 Pork is a bit of yin and yang: a tranquil, squash puree and a mellow hunk of slow-cooked cheek under a Patrick Bateman-esque raincoat of translucent fat on one side of the plate. Next to them, the same ingredients again except more assertive: pickled squash on top of pork belly, a bite-sized cube of unfathomable perfection, is seared on all sides and packs crisp and chew and caramel and salt.

The risk with this elemental approach is that dishes can end up not as the product of imagination and inspiration, and more food as algebraic equation: dish = protein + microherb / (x flavour + y texture). Zzz. Here though, everything feels like its place on the plate is earned, rather than the result of tokenism. 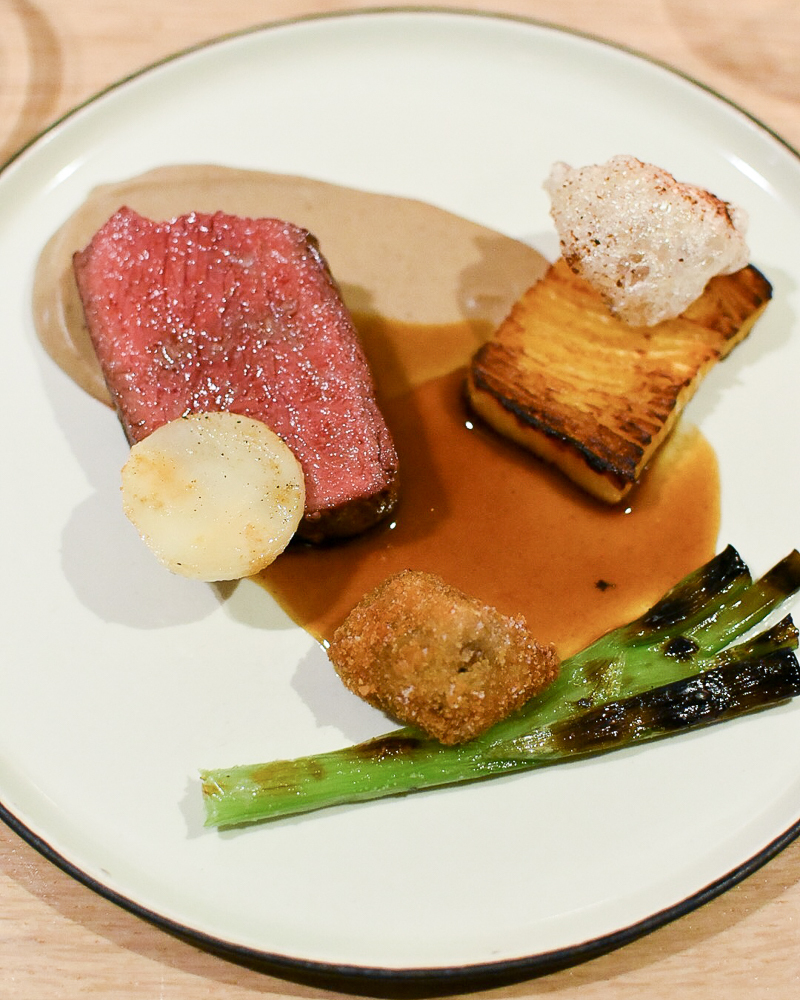 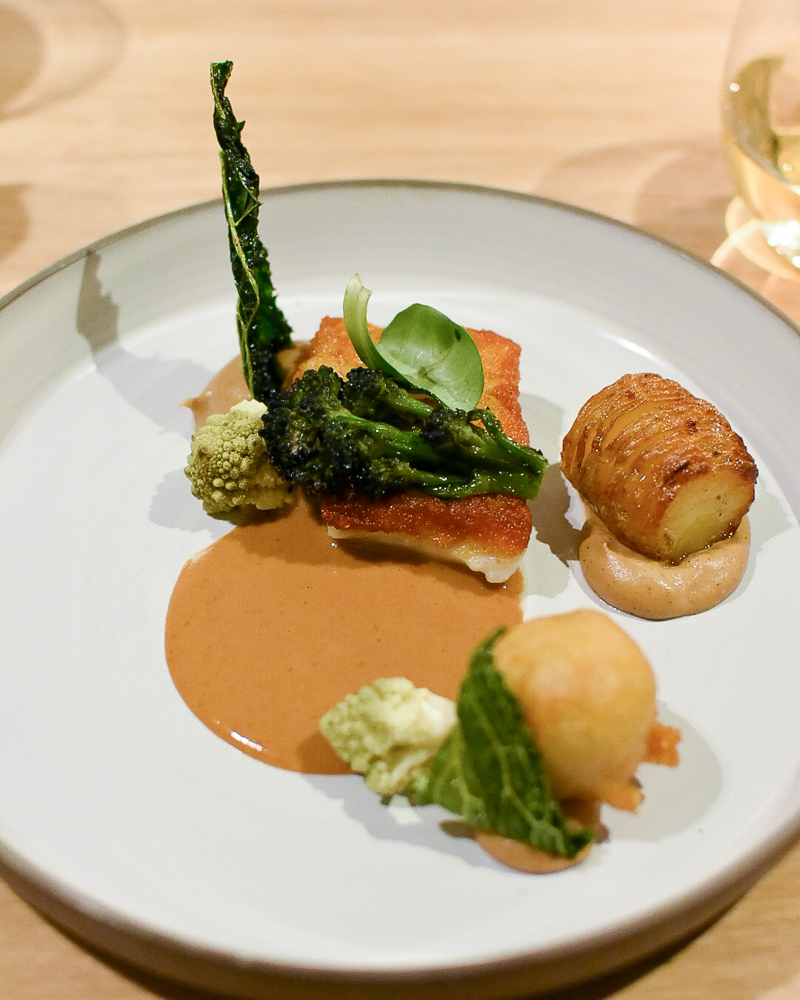 There are moments of joy that silence the table: an impressively, adorably small hasselback new potato with cod, as well as a crab croquette and fish veloute of Mariana Trench-depth: a concentrated flavour-jolt in the form of a deep-fried smoked bone marrow nugget that comes with with strip-loin, and swede gratin with croissant-thin layers, finished in a hot pan until the sugars just catch. I’m also delighted to report that in place of the joyless eton mess deconstruction that modern places often rely on, dessert here is a proper pudding: a plate of baked apple, pepperkaker parfait, “oat glass” (!!), burnt apple reduction, brown butter crumble, and miso mallow (!!!). It’s as if they’ve shoved a Black Mirror-style implant into my temple, discovered my most fundamental desires, then exported them onto a plate. If this is dystopia, please sign me up. 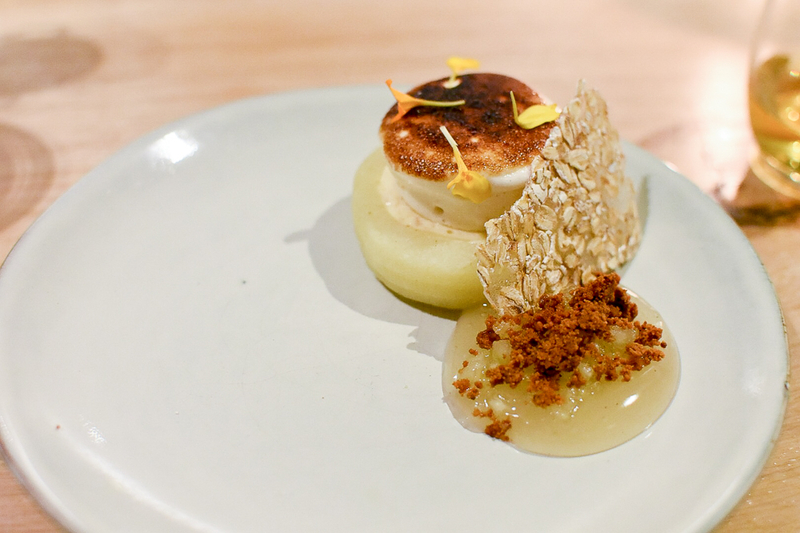 I don’t want this to be a preemptive obituary, a Scand-le in the Wind. Even if that pun wasn’t so awful I wouldn’t relish the opportunity to use it. I’d much rather Norse stayed open, I want to go again and again for that bone marrow and that miso mallow and pretty much everything else the kitchen wizards conjure past, present, and future. Early indications show that people have responded to the honesty and vulnerability of that blog post, and there’s been a spike in bookings. I hope it sustains.

Norse’s isn’t a unique or isolated predicament, though. There are tough times ahead for the restaurant industry; market reports have forecast a dark storm for months now, and we’re just starting to feel a breeze and notice the dog is acting weird. Your favourite restaurant will be happy to share some shelter with you.