'A punch in a cream velvet glove' - L'Enclume, Cartmel, reviewed

L’Enclume is now a Michelin three star. But, does Gordo agree?

In 2006 there were 137 Michelin stars in the UK. In 2022, 232. Three of those now belong to one restaurant: L’Enclume, in Cartmel, Cumbria which went from two to three stars in February's Michelin Awards.

I excused myself, went to the toilet, locked the door and cried.

L’Enclume’s journey started 20 years ago; a young chef and his wife sold everything (including the cat according to Kelly Bishop’s Simon Rogan interview) and moved up to Cartmel to open a restaurant in the old blacksmith’s. I went in 2008 and wasn’t that impressed. There was a new wave of cooking. Molecular cuisine was its name and Rogan had earned a star with it. Frankly, I thought the cuisine wouldn’t last. It didn’t but this chef isn’t afraid of change and kept refining his ideas.

Rogan’s style has spawned several restaurants, some still his own, others breakaways, all great.

Re-visiting L’Enclume with Confidential’s Top 100 Restaurant Guide in mind on a rare sunny day in January, I parked the car next door to the Cartmel Racecourse. Walking back through one of England’s prettiest villages, turning left by the bookshop straight out of a Harry Potter movie I started to realise that L’Enclume had come of age.

The only other place I have experienced this phenomenon is at Vonnas, north of Lyon in France. Georges Blanc’s restaurant is there, a three-star masterpiece. Vonnas the village is really an extension of Blanc, with a cookery school, two further restaurants and a baker's all under the brand Blanc; the whole village is now nicknamed Village Blanc.

Walking down the street to L’Enclume, you need to be careful not to trip over a young chef in whites, darting from one side to the other with a stockpot in hand whilst on the opposite side two more chefs are fussing over a box of fresh fish on the pavement before allowing it through the kitchen door. It’s all a bit surreal.

When you walk through the front door of a three-star (or, indeed, one that is about to be awarded that accolade) you know it. The hairs on the back of your neck stand up, your heart takes an extra beat, and a wall of love starts to lift you. It’s art of the highest form and you know the next three or four hours are going to be a joy.

The first three-star I visited was in Reims, Les Crayères, a restaurant in a fairytale castle. The chef was a 34-year-old superstar, Gerard Boyer.

After a long journey Chef’s wife, Elyane greeted us at the front door wearing eight grand’s worth of Lanvin. She was the most beautiful woman I had ever seen - and the most gracious seeing as we were an hour and a half late.

My daughter Georgina, aged seven, had that look little girls have when they realise that Disney Princesses actually exist. Her mum was probably thinking about stabbing her in the eye with a penknife.

After a main course of genius, we were offered the dessert menu.  Georgina was not happy. There wasn’t a crêpe to be seen

“And,” asked the amiable head waiter, “what would the little girl like”?

“Ah, but we don’t do those here, little girl”, replied the unsuspecting Francis, “this is Gerard Boyer’s restaurant.”

“My Daddy said that if I behaved in the car, all the way here, I could have crêpes and that crêpes are the best pudding in the world.” Georgina had turned into Carrie and swivelled her head so she could look straight into my eyes. “Were you telling me porkies, Daddy?”

Francis was still wondering what the fuck porkies were when Madame Boyer appeared. “Oh, Georgina, wait a moment ma petite princesse, let’s see what I can do”.

“Chéri, this is Georgina. Georgina’s Papa has told her if she was good all the way over from England, she would be able to have crêpes.” She looked Chef straight in the eye. “Are we going to disappoint her, Chéri?"

Chéri looked at Georgina, then at Elyane quickly weighing up the likelihood of any conjugal rights for a few weeks if he refused.

Chef cooked the crepes by the table, much to the bemusement of the rest of the diners and served them to a little girl wearing a smile as wide as the straights of Dover she had crossed by hovercraft seven hours earlier. Boyer quietened the room. “From now on”, he declared, “at Les Crayères crêpes will not be Suzette, they will be Georgina.”

Eleven years later I went back for a business lunch with three French bankers. We were about to ask for the pudding menu. I felt a hand on my shoulder, looked around and there was Elyane.

“Bonjour Mark. Gérard has written your dessert menu”. I stood up. Elyane winked at me, kissed me on both cheeks, then handed four dessert cards around the table. They simply read “Crêpes Georgina”

I excused myself, went to the toilet, locked the door and cried. And I’m welling up as I write this.

I have had the great fortune to visit 25 three-star restaurants down the years and all displayed levels of service that go the extra mile. The key ingredient is being aware their job is to make us feel at home.

I can tell you that L’Enclume's service is riddled with hospitality up there alongside the best in the world.

The restaurant itself is whitewashed inside and out with cosy nooks, minimalist Scandi furniture yet supremely comfortable leather seats. Comfort is paramount.

To be truly three-star gaffs though, the food must be superb.

The menus are tasting flights; dinner at £195 with a lunch menu priced at £100. Wine flights run from £59 at lunch, and from £90 to the “select wine pairing” at £295 with dinner. Note that my menu was £175, I think the prices may have risen since gaining the third star.

I was driving, so I nursed a glass of champagne, an unusual premier cru blanc de blancs, Les Freres Mignon, L’aventure. Bloody lovely that was. At £24 for the glass it bloody needed to be. Next time I’m going to stay the night and splash out on a couple of bottles from the extensive list, littered with gems.

There is no way I’m going to go through each “course”. There were about twenty. They were all extraordinary. If you saw Bowie performing Ziggy Stardust on tour in the autumn of 1972, you’ll understand. Ballet? Osipova, tears running down your cheeks with her dying swan. I’ll ask the Editor to put the link to youtube here for that one. Watch it. It’s what eating that meal feels like, knowing it must end.

The most ordinary-looking dish: very thinly sliced langoustine, served Japanese style in rounds, napped at the table with a beurre blanc sauce finished with pike roe. It’s my dish of the decade. I’ve never known simplicity deliver such a punch in a cream velvet glove.

I had a small problem with the duck dish - some bastard ate the other half.

“Seaweed custard, beef broth and bone marrow, Porlock oysters, our blend of caviar.” That was number four or five on the list. I mean, if you saw that on a menu, you’d never order it. A decision you would regret.

Course after course kept knocking me out. The cod was a coin-sized medallion two centimetres deep, steamed with dulce to the point where ten seconds more and it would simply be cod, not L’Enclume cod. It’s then placed in a foamy broth with a hint of a beach three miles to the east of Marseille, a bed of rainbow chard and Mylor prawns.

I had to refuse the cheeses; I’ve regretted that ever since. I keep staring at my pictures of the board.

I’ve got to stop here. Have a look at my pictures, but bear in mind the food is actually better than it looks. If you like your food, you really do need to save up and go. It genuinely is a once-in-a-lifetime experience. You’ll love it. And it’s by northerners, for the world. 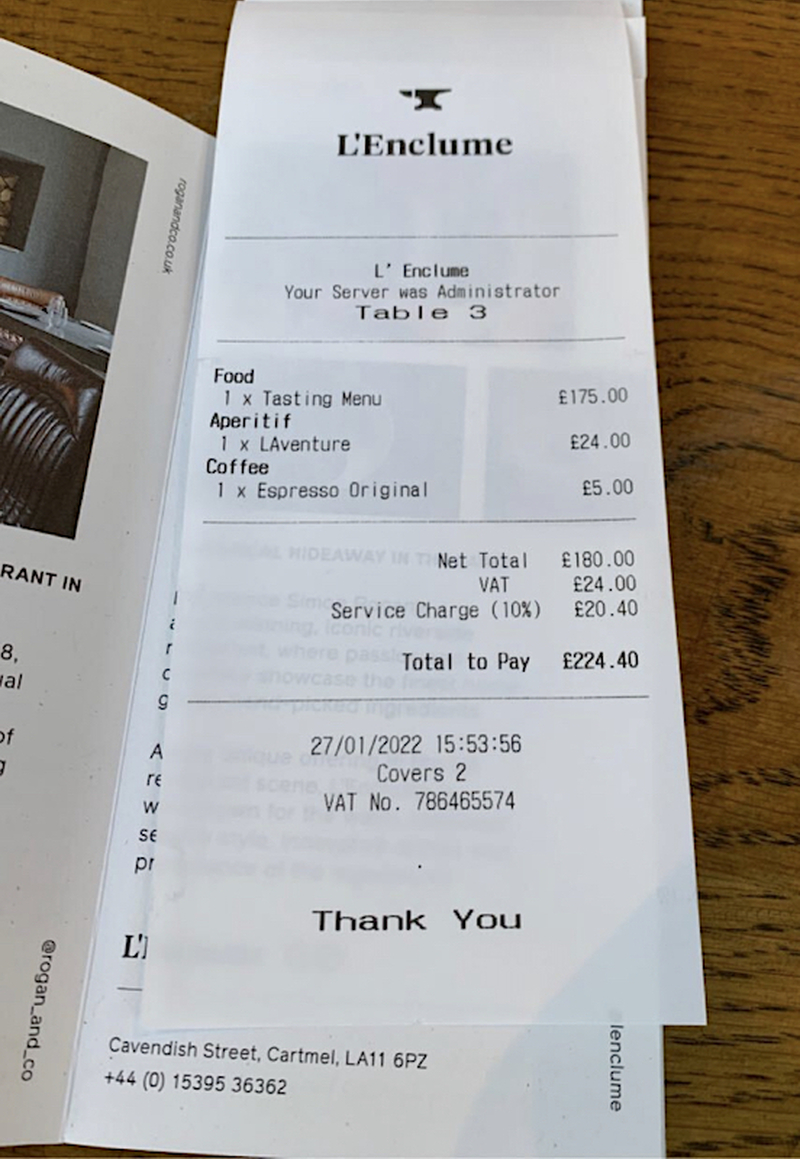 The Plant Collection: an oasis of Dutch charm and devotion
What you say
Previous Article Next Article
Read Next
● / Latest Reviews