I won’t be swayed on this one – Kirkstall Bridge has the best beer garden in Leeds. I can’t think of many better pastimes than whiling away a summer afternoon amongst the trees or on the banks of the River Aire, pint in hand and work phone switched off.

But this isn’t summer, and I don’t even have a work phone. Luckily though, the Bridge is also one of Leeds’ cosiest pubs, with a fire that adds to the natural heat generated by the many, many people that always seem to be crammed into every corner (even on a cold Tuesday night).

It’s like a pig made love to a tree and the result was pulled fruit meat. Or something.

The menu is largely straightforward – classic pub food and a list of burgers and pizzas. They do roasts on Sundays and wings on Wednesdays; nothing fancy, just hearty grub to accompany your beer. They’ve obviously got it right too, because the place is always rammed.

On the snacks and starters menu, the promise of a massive, runny scotch egg jumps out and hits me in the face but they’re all out, so I decide to try Jackfruit Bites (£5.95). They come in croquette form with mango chutney and lime pickle. I only chose them because I’ve noticed they seem to be a bit of a thing at the moment (which is code for hipster as hell and vegan).

I have no idea what a jackfruit is. Fair play though, it’s absolutely delicious. It’s like a pig made love to a tree and the result was pulled fruit meat. Or something. I love it and find myself daydreaming of making jackfruit curries at home having foraged them myself and brought them back to my converted barn on my fixie bike, of course. They go particularly well with Kirkstall’s own Augmentation (£5 a pint) with the Citra Cryo hops offering all sorts of fruity flavours. An absolute steal at a fiver, that. My partner has a pint of Providence (also Kirkstall - £5.20) which is fantastically aromatic without being overwhelming.

For my main, fish and chips (£9.50) comes with an impressive amount of light, crispy batter. It’s also massive (just how I like it) and the fish is soft and delicate. None of that oily rubbish either. They use one of their core beers – Virtuous - to make it, so guess what I’ve decided to drink next? (£4 a pint) I could write a paragraph about this beer – I truly believe it’s one of the best IPAs in the country. This is partly down to the use of Simcoe, which is a great hop to use to get a good balance between bitterness and aroma as it can be used at both “ends” of the boil. For me, it’s faultless as well as being not overly strong and gluten free.

We also try the Bridge Burger (£8.95), which is fine, but nothing remarkable. The burger is a bit on the dry side and the pretzel bun doesn’t have much taste but is a decent texture. The highlight is the extra bacon (£1), which adds crispiness and salt to the equation. I like to know that if I wanted to, I could shatter my bacon over an obnoxious punter’s head, and this doesn’t disappoint. Both our meals also come with fat pub chips. These ones are a bit soggy, but at least the flavour is decent. Once we’re done, we sit at the bar and order some more Augmentation to go, mainly so I can take a video of the awesome bar-top canning machine they have for keg takeout. God, I want one of those.

Kirkstall Brewery are going from strength to strength at the moment. The brilliant Cardigan Arms is thriving and the tap room at the brewery itself is tantalisingly close to opening. It’s obvious why this is – it’s well-run and the beer is exceptional. And the Bridge, as their flagship location, is a deserved mainstay of the Leeds pub scene too. There’s a good reason why, in the aftermath of the 2015 floods, hundreds of people from the local community went down to help clear up, brooms in hand. It’s a local triumph, a welcoming haven to all, and an example to all pubs. As a bonus, it’s also a pleasant walk from the city centre. A must-visit. 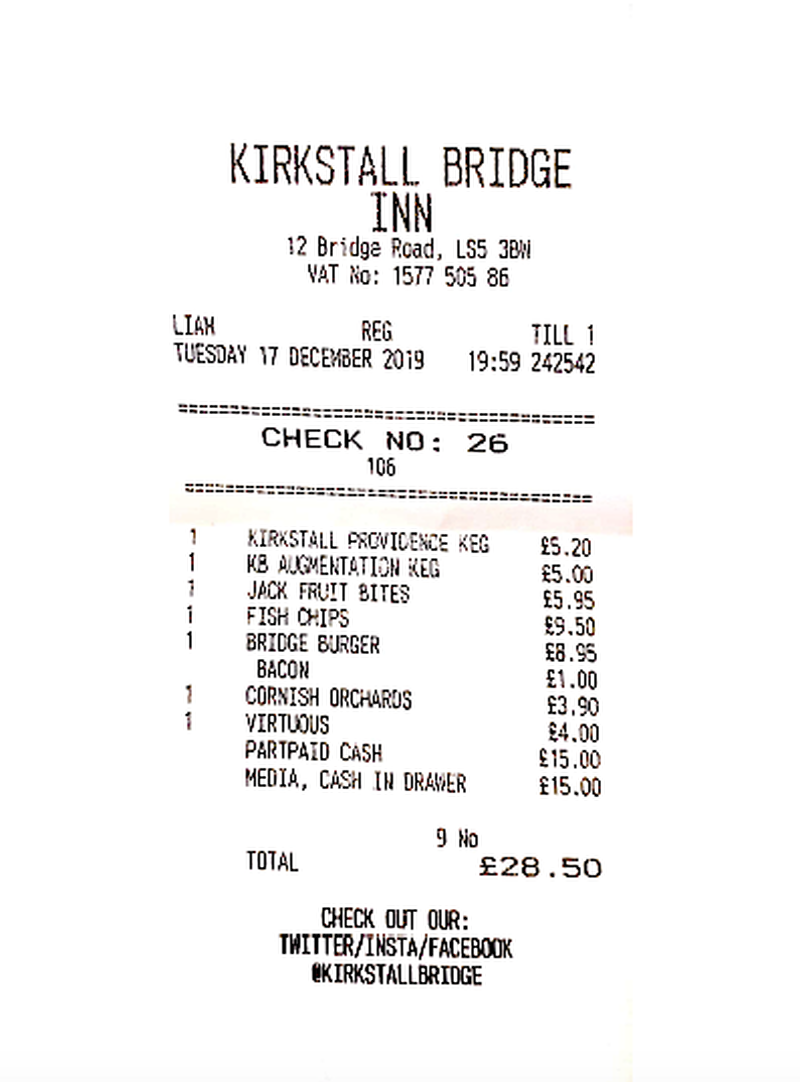