From tiny Cheadle side street to Greek Street: The rise of an Indian street food empire

Yorkshire folk rejoice, because another fantastic restaurant is heading over the Pennines to open a branch in Leeds.

Indian Tiffin Room first opened in a side street in Cheadle at the beginning of 2013. After gathering rave reviews, and the attention of national food critics, they opened a larger restaurant on First Street in Manchester. Now they are about to launch their third ITR in Leeds, a city they have long wanted to be.

We sat down with owners Suresh and Srini to find out a little more about the journey so far….

Where did your story start?

Srini: “We’ve known each other for about 15 years. We studied together before both working at the Radisson Hotel at Manchester Airport. Around 2007-8 we went our separate ways; I went down to London, and Suresh went to York. Then in 2012, we had a random conversation about doing something different. We wanted to make our mark in the industry.

“We were brainstorming, but we couldn’t let go of the idea of Indian street food, which is very popular in India, but there was a gap in the market over here. I am from Bombay whereas Suresh is from Mysore and he’s lived in Bangalore which is very multi-cultural, that’s how we’ve managed to gather so much inspiration from the different cuisines within India and that is reflected in our menus.”

Why start in Cheadle?

Suresh: “We have both lived in Cheadle since moving back to Manchester. We looked everywhere for a suitable first site, including Didsbury and Chorlton, but Cheadle just seemed to click. We found a little ex-Halifax bank but at that time, no-one knew us, so nobody was keen to offer us a lease.

“We wanted a bit more space because we are used to working at five star hotels, but we had to do well first with our little place in Cheadle.”

So you couldn’t get the backing for this great concept you had?

Srini: “We were two Indian guys, with no track record, wanting to open a new restaurant. People didn’t understand the concept or the food or the passion behind it. It was about building trust from the landlord and people you are asking to borrow money from when you have no proven background.” 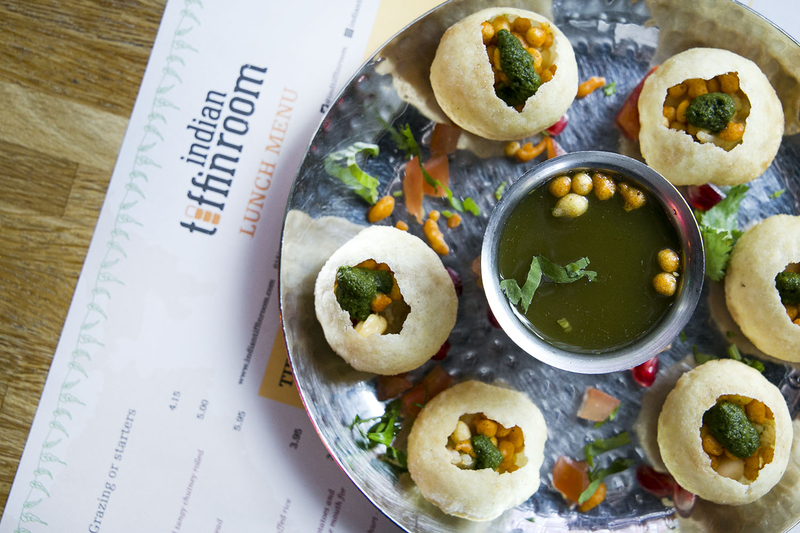 How long was it before you could comfortably admit Cheadle was working?

Suresh: “It’s a 36-cover restaurant on a side street. It took at least 6-8 weeks for people to notice. We were cash strapped, so weren’t able to go big on marketing, we just did a bit of social media. Cheadle was a blessing for us because the locals were so encouraging. A lot of customers had been to India so they knew the food and they could relate to what we were serving.

“Also when we opened, Rick Stein was doing his series on Indian Street Food on the BBC. People used to watch that and then come in to try the sorts of things he was cooking.”

Do you think the success of ITR helped to make Cheadle more of a destination for dining?

Srini: “Cheadle is a big hub now. When we opened there were only a couple of restaurants there, but in the last four years a lot has happened and many new places have opened. Our landlord said, ‘you guys are making a revolution in the food industry Cheadle.’ 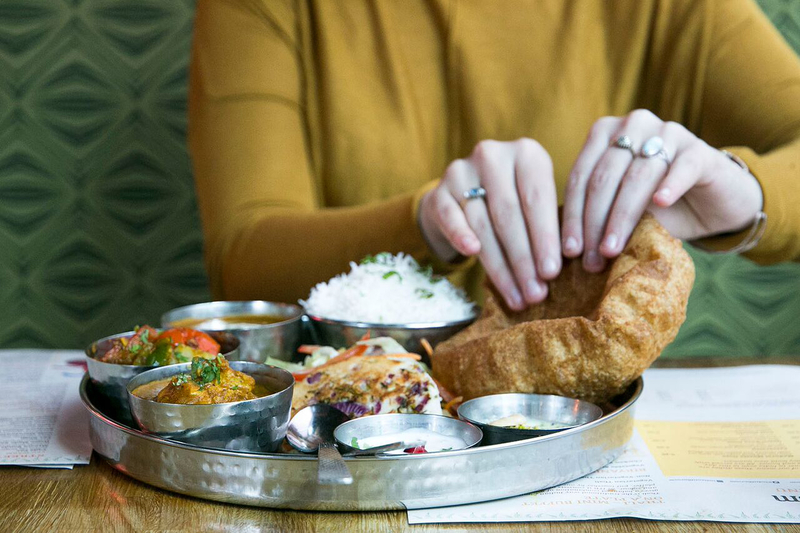 Were you amazed when you started attracting some of the national reviewers?

Suresh: “That’s the power of social media and word of mouth. The Jewish community especially really embraced what we did. They loved the food and spread the word into Hale and Wilmslow.  Many of our customers are from a business background and used to give us good advice, motivational tips and suggestions about how to grow the business. We learn something new every day. One gentleman managed to help connect us to the First Street.

You were one of the first tenants there. Do you feel you were taking a real chance?

Suresh: “Our business development manager at Nat West could straight away understand our concept. He knew it wasn’t just another Indian or Bangladeshi restaurant.

“We were ready to bring our brand out.  We really wanted to go to Leeds and we also wanted to get out name out in Manchester City Centre, but much of it was out of bounds because of high rents.

Have you been searching for the right place in Leeds for a while?

Srini: (laughs) “Leeds has been a bit of a struggle to get in to. We have friends who live there so we know the city quite well. Leeds has got a nice vibrant atmosphere; it’s a smaller city than Manchester with a lot of people travelling in from the suburbs.

“The challenge was to find the right location. Greek Street was always where we aspired to be when we started looking and now we are there on the corner of Park Row and Greek Street amongst the hub of the dining scene.” 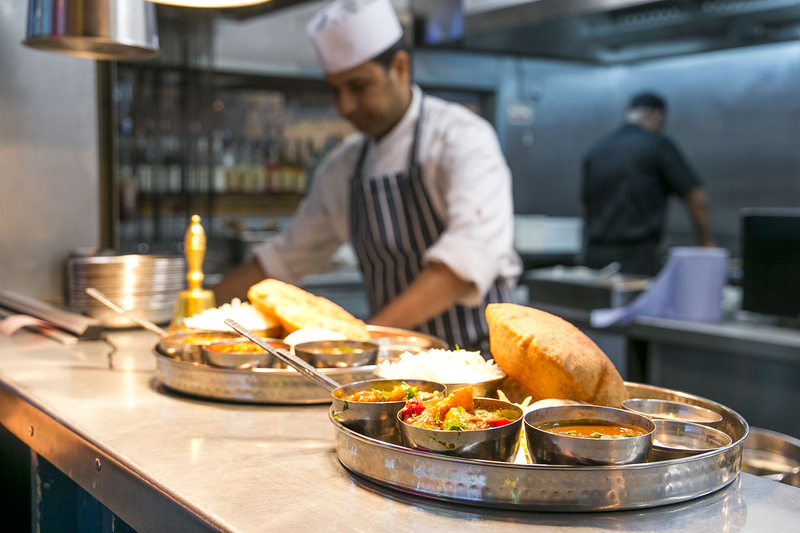 Have you changed your menu for Leeds?

Suresh: “No it’s the same menu with a selection of dishes from different parts of India and a wider menu for dinner. In Leeds, there aren’t many restaurants that offer this kind of wide variety; north and south dishes, tandoori, street food dishes and starters. That is what we are bringing to the table in Leeds and we’re very excited about that.

Is the new Leeds restaurant bigger than First Street Manchester?

Srini: “It’s about the same size, about 100 covers. But the layout is different. It’s a very old, listed building but that works for us. We have to relate it back to India with the slight colonial feel whereas Manchester has a more industrial feel If you start putting scaffolding and stainless steel around, it wouldn’t do the building justice.  The colours will be a little different, but still carrying the ITR vibe about it.  The paintings are the same. We’re really excited.”

Suresh: “It’s just like having a baby, you know. After Cheadle we waited two years, before Manchester. We are doing it organically we want to go one step at a time and make sure the basics are right before we start thinking about what’s next but having said that, yes, we have expansion plans, once we have let the dust settle, we’ll keep moving forward.”

Indian Tiffin Room Leeds will be open by the end of March 2018.

Click here to learn more about the Indian Tiffin Rooms 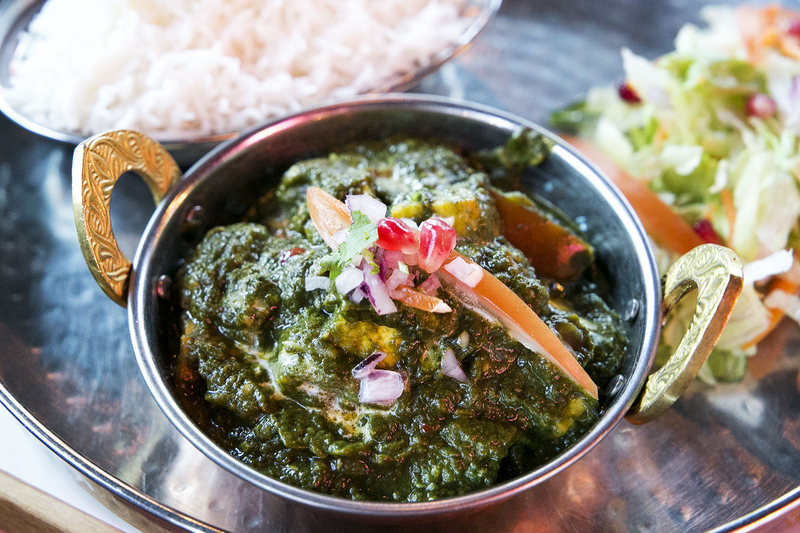