'Now for something a bit different' - 4 Kitchens, Chapel Allerton, reviewed

Crab... rabbit... venison? This may look like your standard curry house, but it really isn't, says Simon Richardson

Last month, I reviewed my favourite curry house in Leeds. In it, I pointed out that a person’s favourite Indian restaurant is a deeply personal and treasured thing, and that it’s very difficult to persuade someone to change their mind.

I’ve had so many curries in my life that I could close my eyes and recite “the menu” - but this is precisely what makes Chapel Allerton’s 4 Kitchens so intriguing. It takes its dishes from four states of India; Delhi, Rajasthan, Goa and Maharashtra (hence the name), and the menu itself is rooted in history and class structure, with royalty and street food represented side by side on every page.

They’re swimming in a rich coconut sauce, which I could transfer to a pint glass and neck if I wasn’t so damn polite

None of the typical dishes are anywhere to be seen, so you’re forced to think, to engage with what the place has to offer in a way that rarely happens in an Indian – because it’s all usually familiar and comforting. So perhaps I’ll be swayed?

The nods to history on the menu are fitting, as the building itself bears its own marks of Leeds history with a police station sign that pleasingly draws the eye away from the typically garish Indian restaurant signage.

The food offering promised to intrigue, and it does. It’s almost jarring not to immediately know what I want, so I flap a bit over the order. Fortunately, the multiple-regions concept lends itself well to a more tapas-style approach, so we decide to order a few things and share.

But what are the least stereotypically 'English Indian takeaway' dishes we can order? I go for soft shell crab (£7.95) and, well, that’s exactly what I get. I'm finding it hard to shake the mental conditioning that everything I eat should be packed with rich, diverse, spicy flavours. This is crab tempura – pure and simple.

We also try curried scallops (£7.95), which are perfectly cooked (no accidental rubber here). They’re swimming in a rich coconut sauce, which I could transfer to a pint glass and neck if I wasn’t so damn polite.

The stand-out of the appetisers though is from Rajasthan – marinated tandoori duck breast (£5.95) that is absolutely bursting with flavour, without having lost its juicy tenderness in the tandoor. It’s got a bit of a kick to it too, so it’s time to test out the wine – yes, that’s right, wine.

You’ll see more and more Indian wine around this year, and the Fratelli Shiraz (£21.75) is a classic example of what you’ll get. On its own, it’s utterly unspectacular. But as with the others I’ve tried over the last few months, it comes into its own when provoked with spice. The taste lengthens, it stands up brilliantly even to bead-of-sweat level spice and doesn’t in any way mar the taste of your dish.

I’m in full curry mode after that duck, so I’m pleased to see the mains arrive looking suitably familiar. The menu tells me that the Rajasthan venison curry (£13.95) was once served to royalty in place of lamb, but the rich, almost nutty taste of venison doesn’t really come through and it leaves me thinking that it would have been altogether better with lamb.

The rabbit (£13.95) however, is a completely different prospect. I always suspected that rabbit would lend itself well to Indian cuisine, as it favours long periods of time cooking, stewing and marinating. I wasn’t wrong – it’s fantastic. The slightly gamey flavour comes through and the texture is incredibly satisfying.

We find room for a vegan side too – Bindhi Jodhpuri (curried okra - £6.95), but while the cumin flavour is there to warm the taste buds, something has been burnt in the process and it overrides the whole flavour. We get a couple of naans on the side – a stuffed cheese and chilli (£3.25) and a peshwari (£3.25). Both are perfectly passable, with the stuffed cheese offering a satisfyingly doughy texture that’s definitely worth a look.

I have to say that despite ordering more than I normally would, I’m not particularly full, but my wallet feels slightly lighter than it would at a competing restaurant.

But then, 4 Kitchens is offering something a bit different here; the chance to enjoy authentic Indian food with an angle (and some ingredients) that you might not be familiar with. And for that, they should be applauded.

I’m not changing my mind about Corner Café though – not on your nelly. 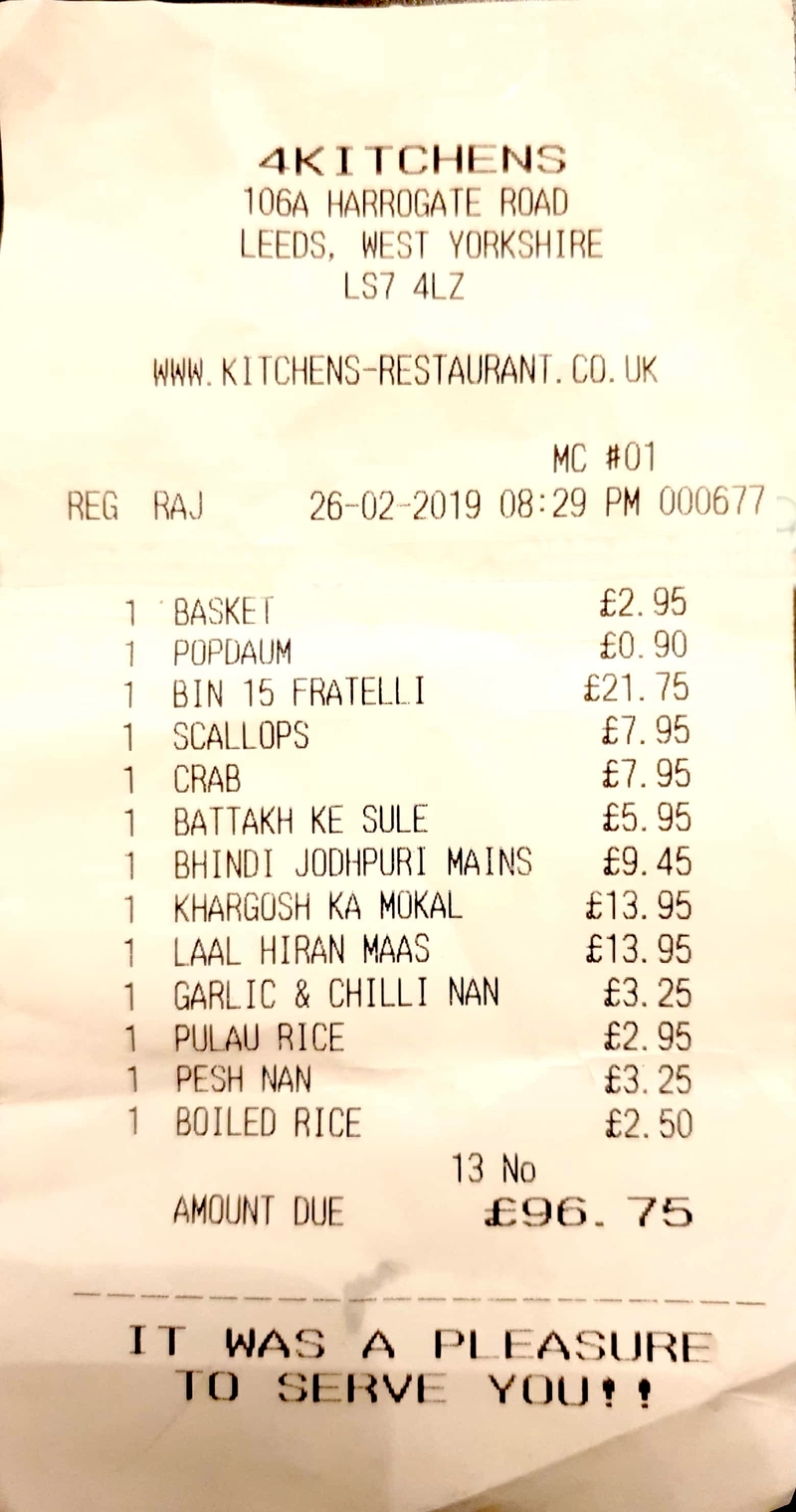