'Anywhere serving two kinds of fat with its bread is good by me' - Host, Ilkley, reviewed

Menus don’t just appear on your table out of thin air. There are committees and studies and test groups into language, design, psychology and human behaviour in order to refine them into an exact science. Science is so cold though. Host’s menu is a work of art. Yes it looks the part - it's off-white colouring and tasteful lettering would give Patrick Bateman a Bone - but crucially, it says all the right things, and speaks from the chest.

It could be scrawled on the side of a garden shed in human excrement and I’d be there, sat on the lawn, tucking a napkin into my collar.

“Brave as fuck opening there,” a chef friend of mine says

From the first page it grabs you by the hand and leads you astray, enticing you with choices and temptations to make your perfectly good night a great one. It's a culinary version of Black Mirror's Bandersnatch, presenting you with the illusion of choice, except free will isn’t on the cards when something called a 'Host Hooch' and a glass of Pommeau (“how I imagine whiskey tastes to people who actually like whiskey,” as my friend Josh puts it) are suggested while we browse the rest of the menu with some snacks.

This is a nice place; a narrow, marbled cocktail bar up front with a sequence of cosy dining rooms off to the side, the walls all Farrow & Ball’s finest, furnished with velvet cushions and a “controlled explosion in Oliver Bonas” aesthetic. Not to make assumptions about whoever’s in charge, but they strike me as the kind of people I’d trust to buy good olives, so they escape our scrutiny in favour of the more involved-sounding snacks.

Anywhere that serves two kinds of fat with its bread is going to get on my good side; whipped pork dripping for the first course, cultured butter for afters. 'Hogget Scrumpet' may sound like a name you’d find on The Bullingdon Club members list, but are in fact nuggets of year-old lamb’s breast, breadcrumbed, deep-fried and rich enough to warrant a place on said list.

Following snacks we’re recommended two or three small plates per person to share, each a combination of seasonal produce and global influence. Cauliflower’s earthiness is accentuated by roasting until its edges char and served in its cast iron pan with a slick of massala sauce to temper any bitterness.

Dishes being paired up at the kitchen’s discretion means we get to mop up the leftover curry sauce with some of the most perfect fried chicken I’ve ever come across (and, cheap plug, I’m currently working my way through all of Leeds’ chicken establishments on my Instagram, if you’re into that kind of thing). These are like grown-up McDonald's Chicken Selects, all juicy thigh meat and craggled coating, served with a cooling puddle of buttermilk and bright dill oil - if the curry isn’t your thing.

Sometimes the dishes served together don’t compliment each other so well, but the kitchen can only play the cards dealt to them. Long, frilly tangles of squid posing as noodles in a sticky, fermented rhubard broth are best kept away from misshapes of roasted and quick-pickled gourd with dukkha and a smoked cheddar custard (not unlike the one served with bread at Roots) - even though both are inspired in their own way.

A similarly umami-rich bowl of confit duck with mottled rounds of salt-baked turnip follows, meaning that a palate cleansing passion fruit ice cream sandwich dessert is essential. The menu - bless it - has a different dessert wine suggestion for each of its puddings. I imagine the recommended Moscato d’Asti would’ve gone perfectly with dessert, but already two bottles of wine in I expect the accounts department would be less impressed.

So, in which of Leeds’ cutting edge developments or food-led suburbs can you find Host? Well, none, really. It’s in Ilkley. Where middling chains and old-fashioned bastions rain supreme over originality or creativity.

“Brave as fuck opening there,” a chef friend of mine says, spying a few of their dishes on my Instagram story, “I really hope he does well." Brave yes, but possibly also lucky timing. There’s no way chef-proprietor Joel Monkman could have anticipated Ilkley losing its Michelin-star appeal last Autumn, but it could work to his advantage. The fall of dictatorships lead to power vacuums, complete with contenders for the top spot. It could also prove to be Ilkley’s blinkers-off moment, giving chance to reassess preconceptions of what 'A Good Restaurant' is. And Host might just be the one to lead the way. 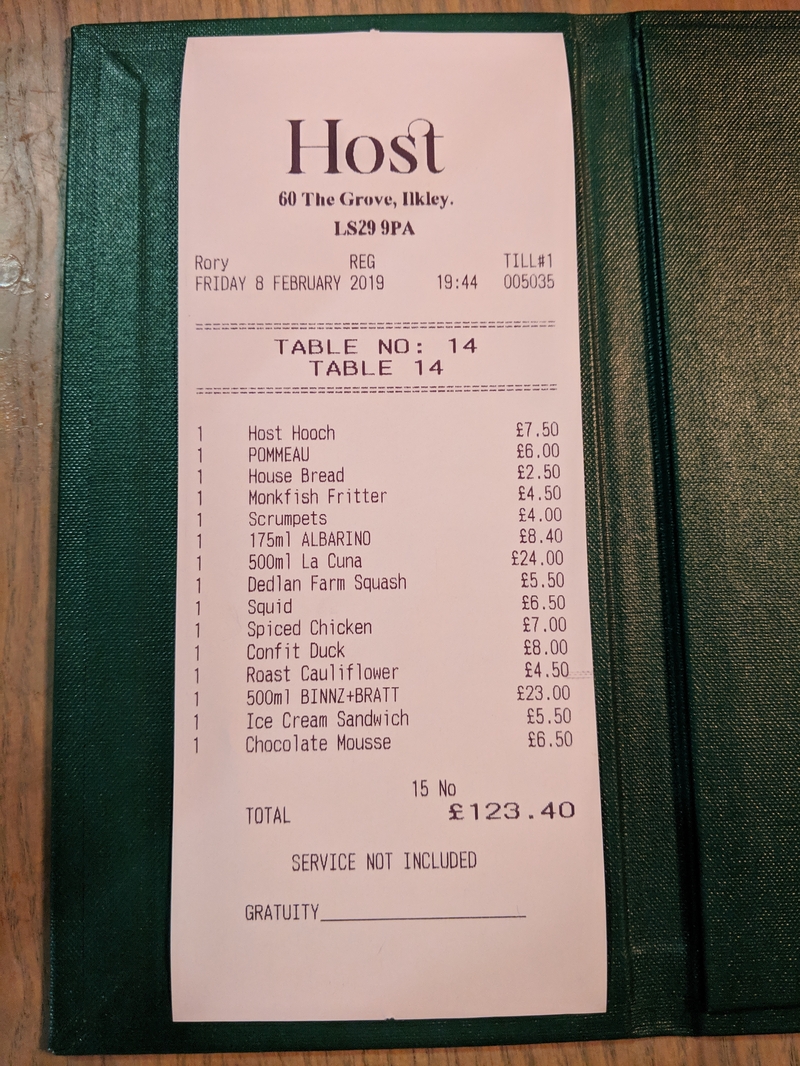