Chances are you’re vaguely familiar with the grief model - a therapeutic idea that humans transcend through seven psychological stages as a response to dealing with with bad news - the earth-shattering kind, not the “We tried to deliver your package, please collect it from the post depot” kind.

For me, grieving isn’t like assembling an IKEA wardrobe; 'complete steps one to seven'.

“I’m quite sceptical of the grief model from a therapeutic perspective, because it makes it quite a linear process. For me, grieving isn’t like assembling an IKEA wardrobe; 'complete steps one to seven'. It’s more a palate of things you may or may not feel.”

She’s behind The Grief Series - seven individual projects that use each stage of grief as a starting point to open dialogue about the process of grieving.

“It’s an interesting structure for me as an artist, but not one I think it that helpful when tackled from a linear way.” and the personal, individual way that we deal with grief is reflected in how the project is delivered and received by audiences.

Each part - or stage - is a different format. From part one - a solo performance titles ‘The Etiquette of Grief’ which serves as a guide on how to deal with bereavement (“that involves me handing out a lot of port and Jammy Dodgers to the audience”) - to part five’s ‘The Crossing’, a kind of choose-your-own-adventure game which helps you plan a funeral - your own.

“Because who doesn’t want a ‘Plan Your Own Funeral’ kit?”, she laughs. “We’ve worked with Imams, Rabbis, funeral directors, secular celebrants, florists, caterers - you name it. It’s got a lot of Leeds buildings and people in it - we wanted something that was of Leeds - but not so Leeds-based that it can’t translate to other communities.”

Part four is The Unfair, a Victorian-style funfair where all of the stalls are aimed at dealing with, and managing anger. You might ‘Let Off Steam’ in a private angry karaoke booth (the eclectic songbook ranges from Aphex Twin to Drake; NWA to Taylor Swift), frantically scrawl your frustrations in ultraviolet over the wall of the ‘Throne of Resentment’ before seeing things in a different light, or literally throw some of your anger away to a more productive or deserving outlet. 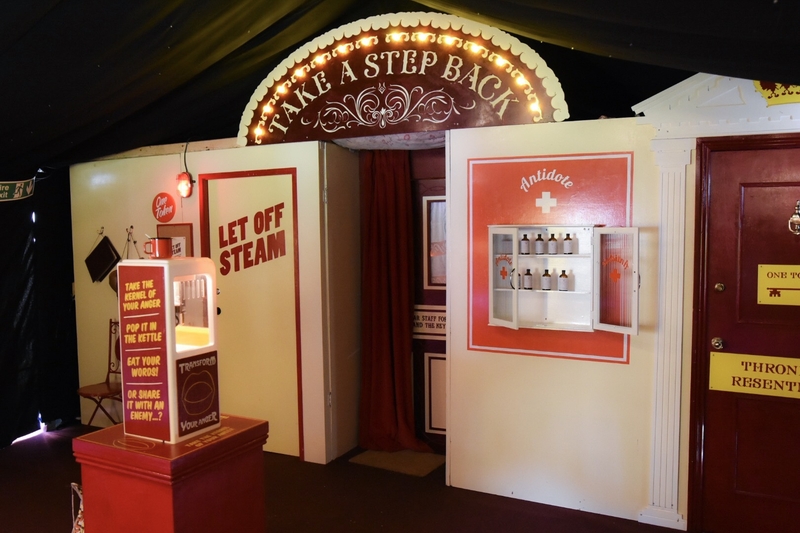 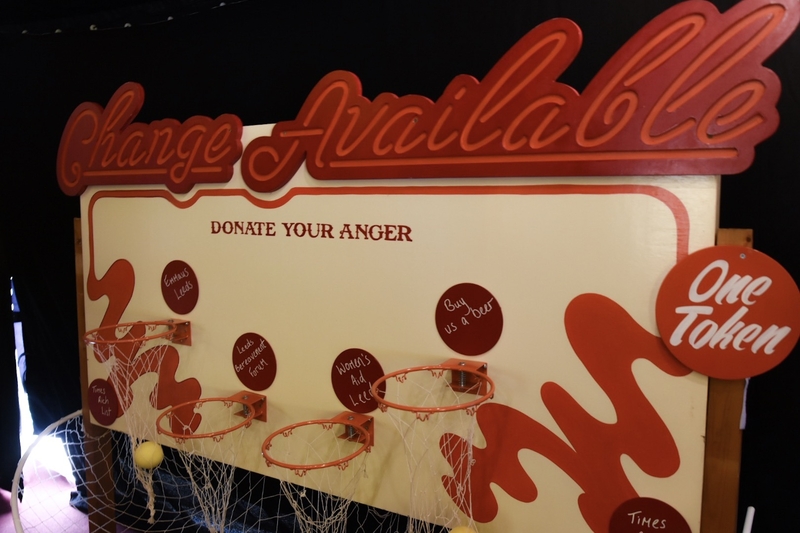 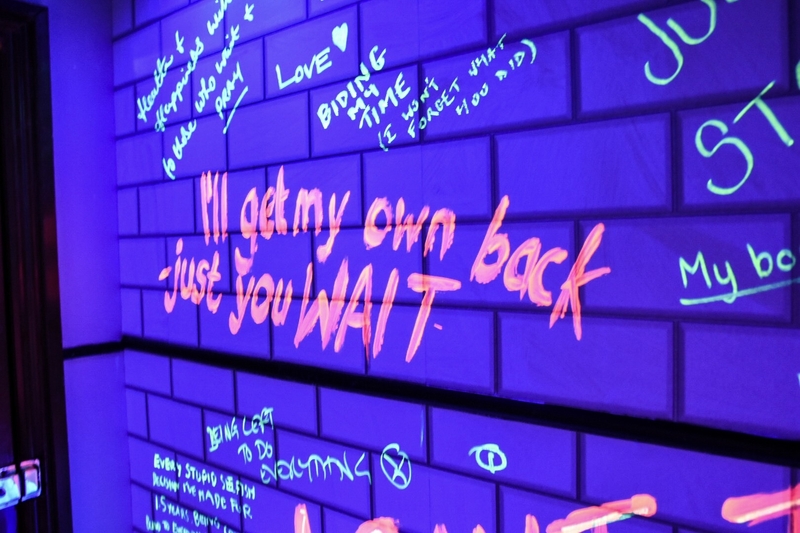 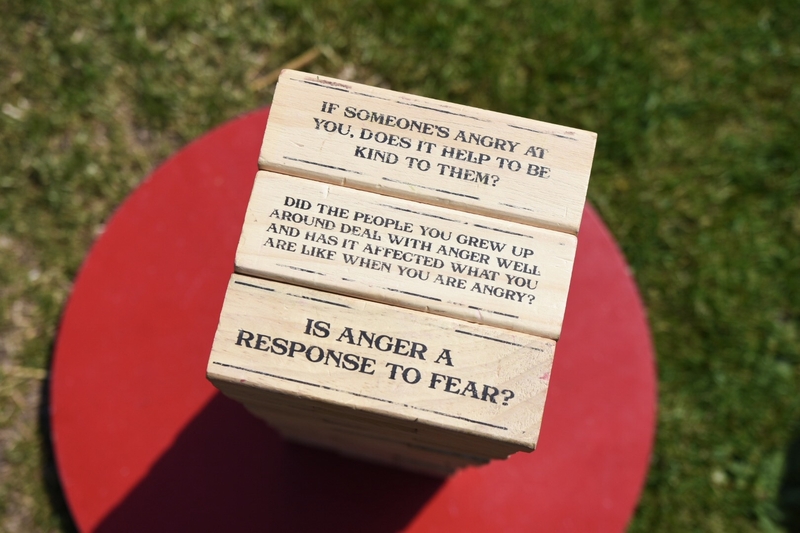 “Participation is at the heart of all the work I do, I trained as an actor and I was becoming increasingly frustrated with the division between audience and performer, I didn't like the idea that “I’m the professional so I’m up here with the light on me, and you’re the audience so you sit in the dark and shut up”. I wanted to create spaces where there’s genuine dialogue.”

Currently in the grounds of Kirkstall Abbey (Until Sunday 14 May), the Unfair has travelled around Yorkshire, and will soon be heading off to Brighton Festival. “It takes a big team to keep the unfair on the road, but I’m lucky I work with a tried and tested team that I work with over and over again” says Ellie.

“They share my values about looking after audiences, engaging people in conversation, and being brave enough to ask difficult questions and hold difficult conversations”

We don’t feel like we have to be relationship councillors to talk to our friends about sex, but when it comes to anger or grief there’s a medicalisation of it.

Ellie is keen to draw a strict line between things that may therapeutic, and clinical therapy. “We’re not clinicians, we’re layman's who are happy to have a conversation. In all the Grief Series projects there’s signposting to actual support services, but we’re just happy to listen.

We don’t feel like we have to be relationship councillors to talk to our friends about sex, but when it comes to anger or grief there’s a medicalisation of it.” The Grief Series team’s work is described as “emotional first aid” by Ellie - “You don’t need to be a paramedic to know a bit of First Aid, and hopefully this is giving people a chance to talk about things in a non-clinical environment

We found that you don’t need to give people much permission to have those conversations, they just need a space where they feel listened to. People have been really generous and honest, and been prepared to talk about their experience with humour and sadness in a way that’s been refreshing. We’re grateful that people have felt able to open up to us. It’s about creating spaces free of judgement, as well.”

Presenting the series as a group, rather than a process, has helped introduce projects to audiences who might not otherwise have considered them. “Somebody that maybe goes to photo exhibitions but wouldn’t normally go to a show might take a chance on it because they liked the exhibition, or a theatre audience might wander around the Unfair because it’s part of the Grief Series.” 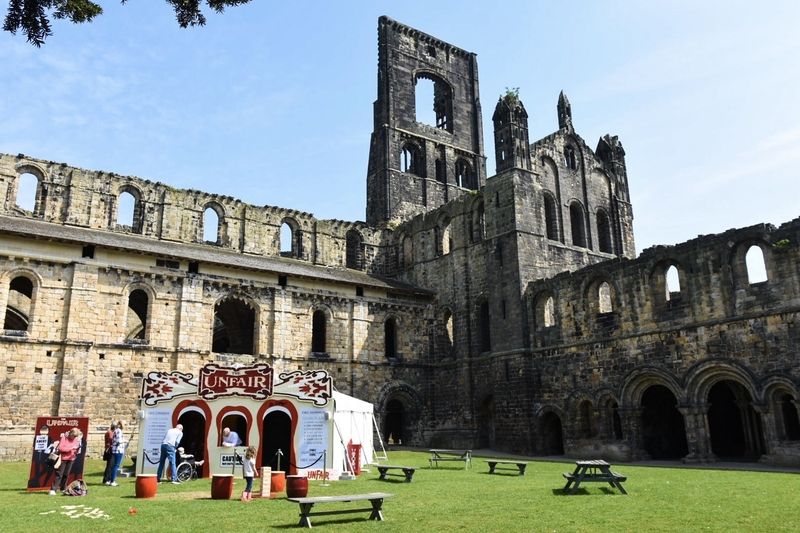 “We live in a society that’s always encouraging us to speed up and get more done, and just to sit and have eye-to-eye with someone is quite a radical thing to do. Having spaces where we can slow down feels increasingly important.”

Unfair is at Kirkstall Abbey until Sunday 14 May. For more information on this and Ellie’s other projects, head over to The Grief Series website.

Calories on menus: what does it achieve?
Read Next
Web Design Manchester MadeByShape