Back To Reviews
● / Venues

And it really was.

Finally seeing Bill Laurance perform live is quite something. He’s one of those artists you hear so much about, read so much about, and then when you get to the show you can really see why.

A graduate of the University of Leeds (in Music, obviously) Laurance stayed in the city for ten years and met fellow Snarky Puppy member Michael League, apparently whilst doing a Chet Baker tribute act in Bridlington. And sleeping in his Nord case. Oh, the days of being a student.

Now though, Laurance is a multi-instrumentalist and composer on his fourth album, has won three Grammys, and works extensively with artists and companies such as David Crosby, Laura Mvula, Ballet Rambert, and Northern Ballet, amongst others.

His live show focused on his three studio albums, music which is a heady combination of his own classical training and the jazz-funk impact of Snarky Puppy – starting with the beautiful ebb and flow of piano chords, merging into samba-style congas and deep plodding funk bass lines.

Laurance introduced ‘Aftersun’ from his latest full-length offering of the same name, the track inspired by American astronomer/cosmologist/astrophysicist (etc) Carl Sagan; the album inspired by space exploration and life in the cosmos. Fully showcasing his breadth of musical understanding, the track spans from jazz rhythms and eclecticism to Jon Carpenter-eqsue pitch shifting and synths.

The track inspired by his travels to Marrakech really pushed his trio – and contained some crazy percussion. Seriously intense Cajon playing was on show from percussionist Felix Higginbotham, who had every percussion instrument under the sun from ankle bells and a variety of cowbells (yes there seems to be more than one type) to a bunch of house keys, which are surprisingly musical.

Seeing the sheer happiness and enjoyment that abounds from a jazz musician’s face throughout a live set really is something to behold - especially at a final 'ting' of a cymbal. And with a trio of hugely impressive young musicians – Chris Hyson on bass, a deft Joshua Blackmore on drums, and Higginbottom on percussion – Laurance’s compositions played out live have a driving intensity and equal soundscape masterpiece range and beauty, with scattered improvisations and much fun.

Utterly beautiful classical leanings from Laurance on piano are sprinkled throughout every track, no matter which album – this music is real soundscape material. World music in every sense - Universe music even.

So revoking that opening comment about ‘jazz’, let’s simply and very easily look at Bill Laurance as an incredibly well-versed and hugely talented musician. We’re off to buy every album now. 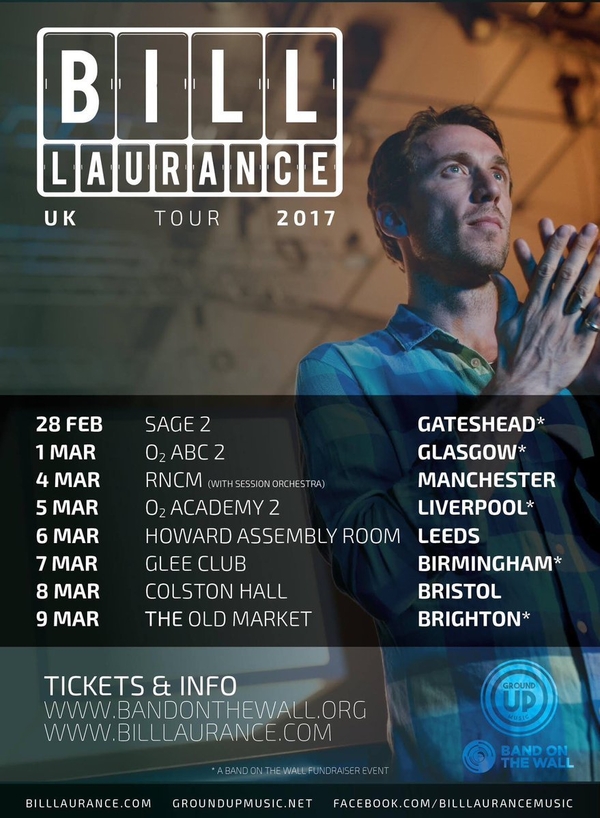 Bill Laurance’s UK Tour continues in Birmingham, Bristol and Brighton, moving on to Europe and culminating back in London and the famous Ronnie Scott’s.

Henry Normal: ‘I spent my life, both in TV and poetry, trying to connect with humanity’
● / Live / Gig