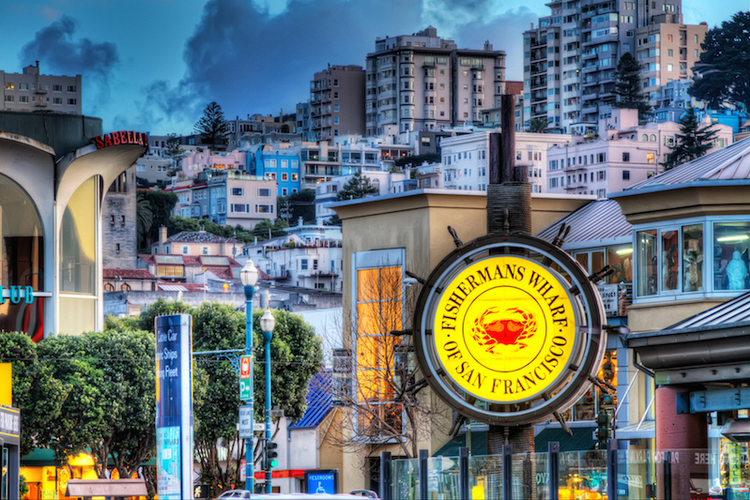 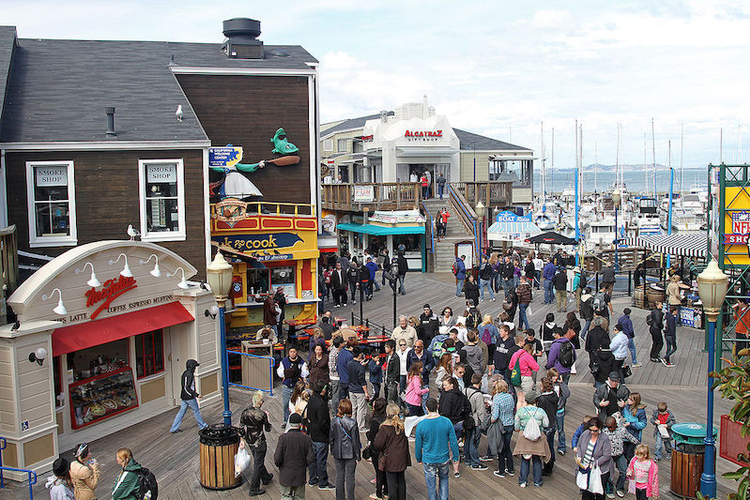 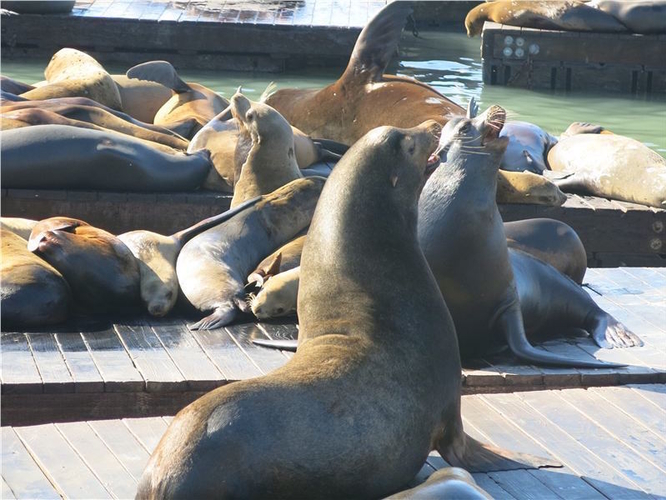 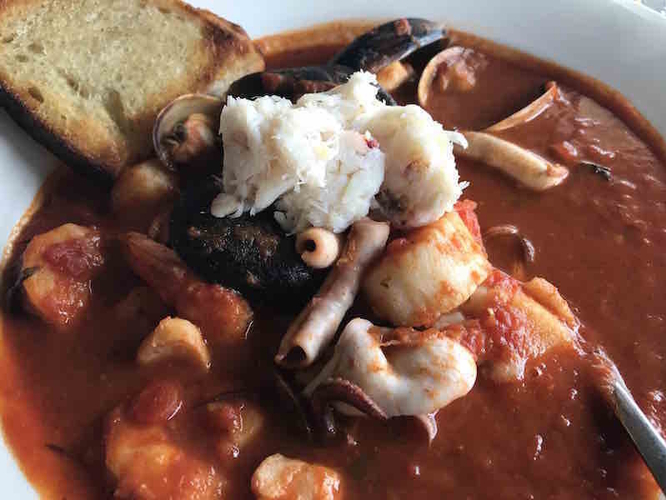 THE last time we’d been in San Francisco it had all been very different – vivid blue November skies as we swept in a catamaran under the Golden Gate Bridge. On our latest visit we discovered why this iconic structure is painted a vivid shade of ‘international orange’; so it can be visible through the fogs that habitually shroud The Bay. Ours was more a light sea fret as our ‘RocketBoat’ zigzagged over choppy waters between the less emblematic Bay Bridge and Alcatraz island. 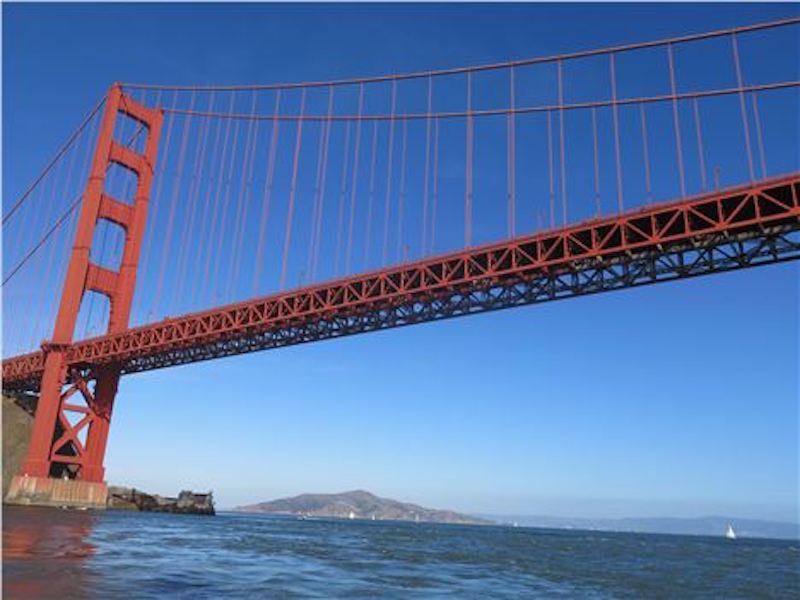 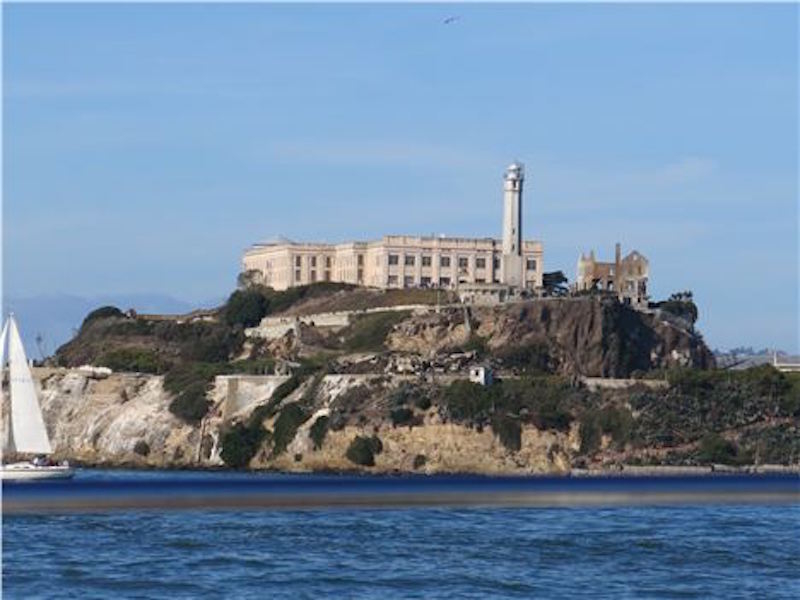 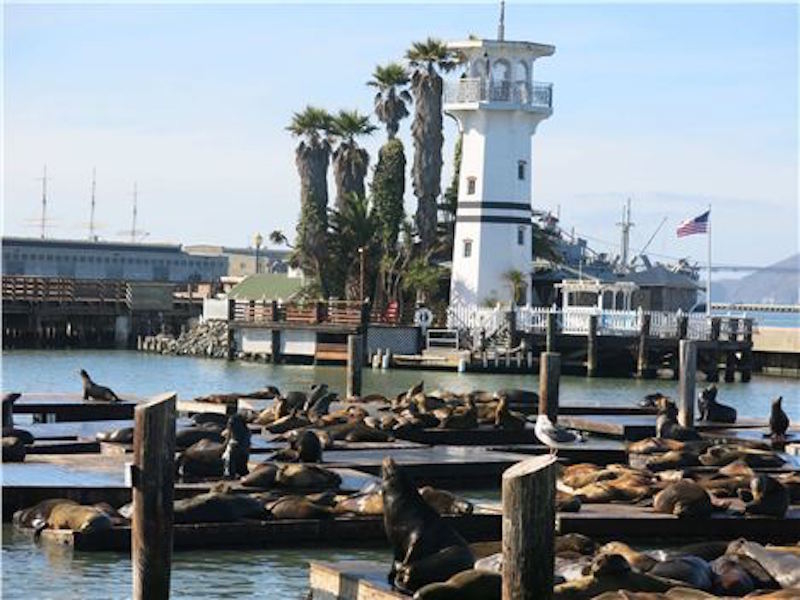 It’s the thrill ride of Bay Cruises, which also offers ferry services and sedater audio tours. Like the Adventure Cat sailing charters, they operate out of Pier 39 at Fisherman’s Wharf – where a regiment of stroppy sea lions share the waterfront with its theme park parade of tourist baits.

The stuffed bear outside Jack’s honours the legend of a sozzled, doomed bear that once frequented the place. He had good taste 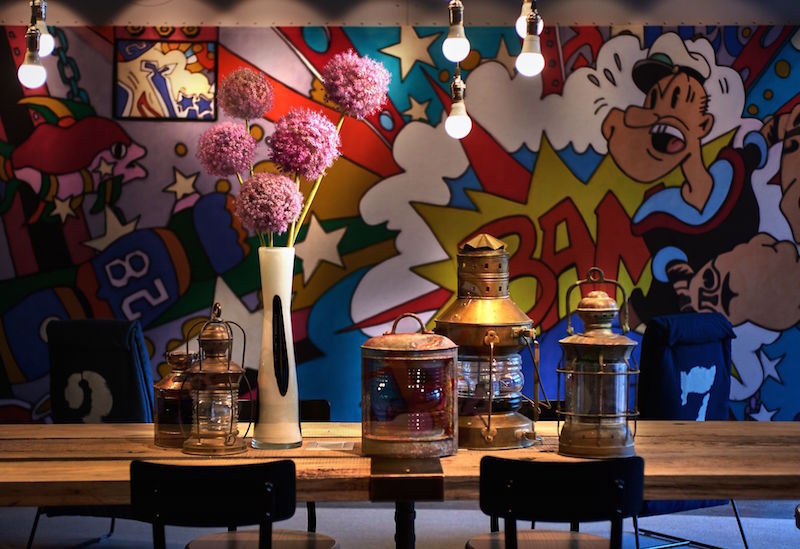 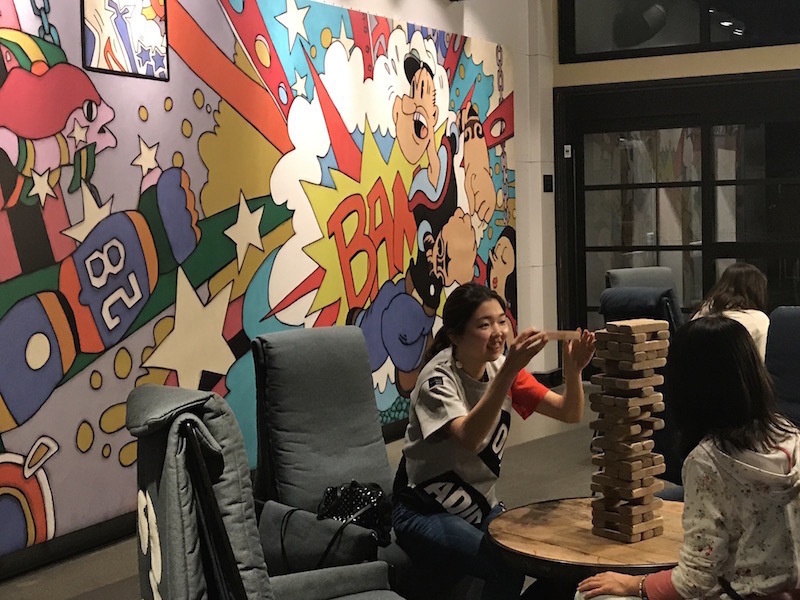 We chose to stay five minutes’ walk away because we were tickled by the presence of boutique hotel The Zephyr in this unlikeliest of spots; on the previous visit our base had been the monumental Fairmont a Cable Car ride away up on patrician Nob Hill. With its nautical playfulness, garden, games and firepits The Zephyr, though large, was a more laidback haven while allowing us to dig beneath the superficial brashness of the Wharf. 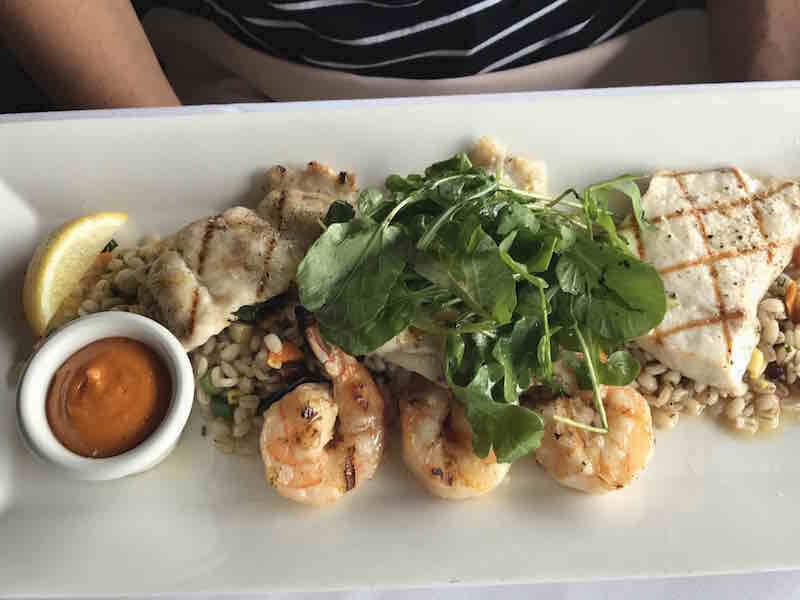 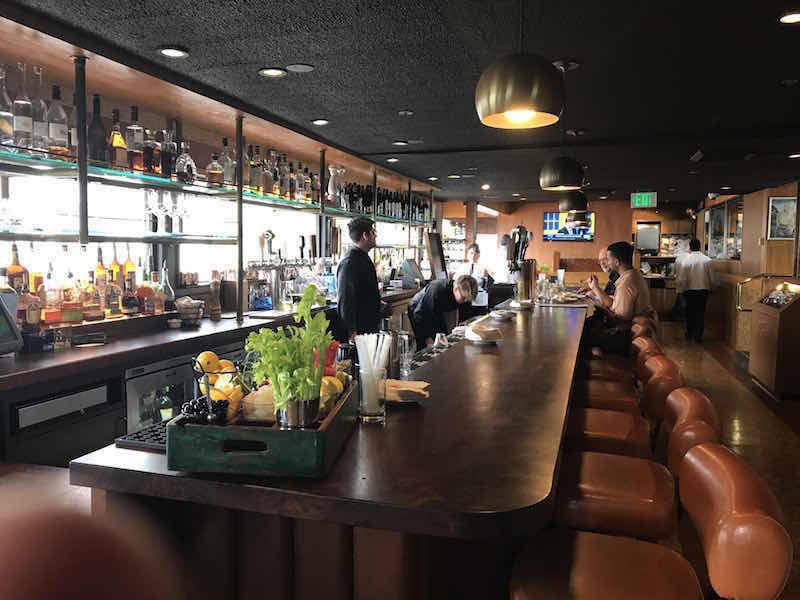 What surprised us most was one of the piers is still a working fishing port, albeit on a small scale servicing the fish restaurants that abound along the front. Most are formulaic, pricey for what they offer, but the grandaddy of them all is something else.

Scoma describes its menu as ‘Pier to Plate’ and they’re not wrong. You’ll find this smart former coffee cabin at the end of Al Scoma Way on Pier 47. Al got the street named after him because back in the Sixties he and brother Joe forged relationships with fishermen, like them of Italian descent, to purchase their catch directly rather than through wholesalers.

It pays off to this day on the evidence of their ‘catch of the day’ Cioppino, which I couldn’t resist after we’d checked in early before the lunchtime rush – and what a rush, handled suavely by the kind of front of house team honed over decades. Ditto the Cioppino fish stew, here an immense combination of Dungeness crab, clams, shrimp, scallops, squid, mussels, fish in a fresh tomato and wine sauce. Chardonnay was from a box, but sourced from a fine Sonoma winery.

Scoma’s not a lone beacon of quality on the Wharf. There’s fine coffee from Biscoff on the Pier 39 Concourse; the Boudin Bakery, hub of the original San Francisco Sourdough, is still going strong; while Jack’s Cannery Bar is a characterful oasis of craft beer with a choice of 68 at  last count. The stuffed bear outside honours the legend of a sozzled, doomed bear that once frequented the place. He had good taste.

And just down the road from the Zephyr (which doesn’t do food) is a chance to go upmarket. French-influenced, Michelin-starred Gary Danko at 800 North Point Street holds a Michelin star, so heavily booked, but you can get a taste of the action at a fraction of the tasting menu cost by grabbing a seat at the bar.

If lobster and foie gras are not your thing walk west past charming Aquatic Park Cove and along the headland to the Fort Mason Center, home of Deborah Madison’s groundbreaking vegetarian restaurant Greens, for 35 years globally-inspired champion of the farm to table movement. The views across the Bay are as gorgeous as the food.

There’s much else to enjoy at this converted military base now home to art galleries, ethnic museums, a great secondhand bookshop and an experimental theatre company.

Walk beyond it towards the Golden Gate and you’re in a wildlife wetland by the Bay. As sunset faded we gave up on reaching the Bridge and turned inland to check out one of the city’s great curiosities – the domed neo-classical Palace of Fine Arts, remnant of a 1915 Expo, now a theatre set in its own parkland. Lit up across its own lagoon, it felt wildly exotic.

Exotic in a quirkier way is the Musée Mécanique at The Wharf’s Pier 41. This interactive collection of 200 20th century penny arcade games in working condition has been run by the same family since 1933. 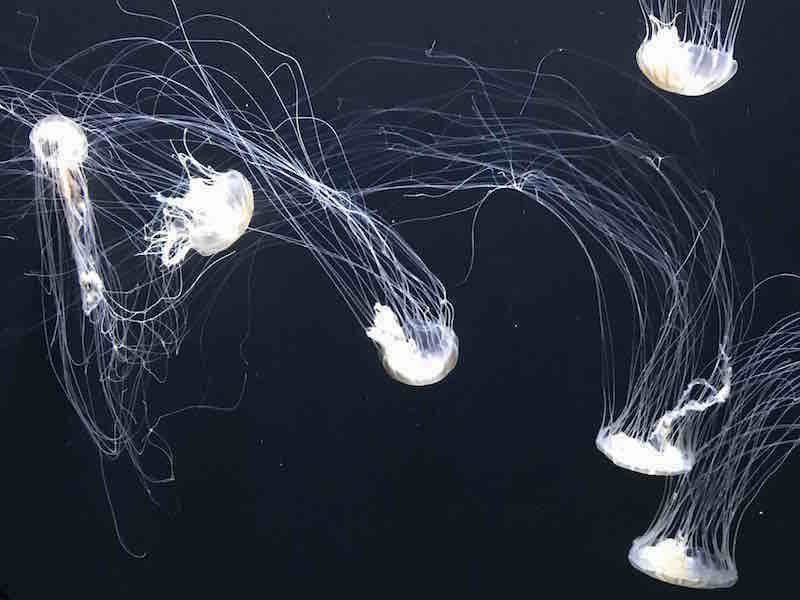 Also fascinating – among a lot of attractions that are not – is the Aquarium of the Bay (free entry with a CityPASS) at the edge of Pier 39. It features more than 20,000 local marine animals, including 50 sharks and Octavio the Giant Pacific Octopus, but our favourites were the playful River Otters.

Equally child-friendly and educational is the Exploratorium. This “hands-on 21st century learning laboratory” is aimed at kids, but adults can have fun making playful connections and tactile discoveries about the world around us. And for when science overload kicks in there’s a fabulous sushi restaurant on site – and a cutting edge Peruvian restaurant, La Mar, just along the prom. 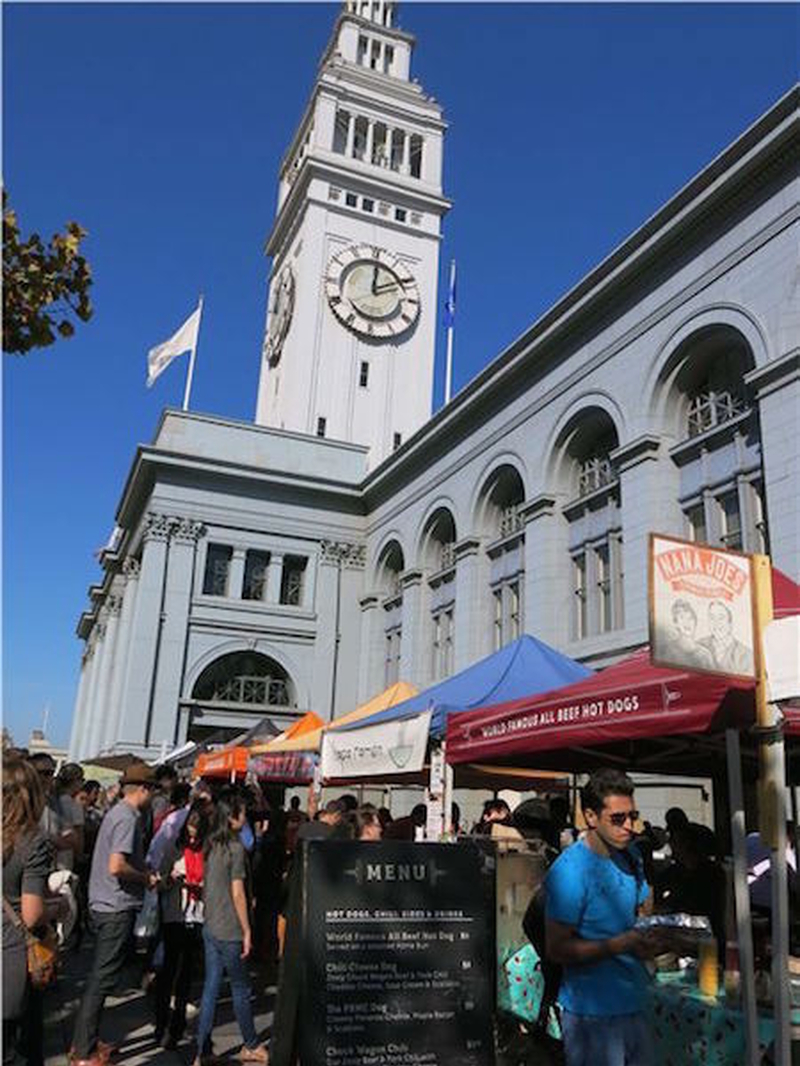 The museum is located a mile east of Fisherman’s Wharf along the Embarcadero at Pier 15, in another attractive rehabilitated dock area. Take the F Line streetcar; the stop after is the landmark Ferry Building. OK, the ferries still leave here for picturesque Sausalito and Tiburon and the more rugged social mix offered by Oakland, but inside the main building is an array of foodie outlets, shops and eateries that showcase the finest Californian produce, including Buddhist-run Green Gulch Farm that services Greens.

Twice a week out front there’s a farmer’s market and a cornucopia of street food options. Amazing stuff. A statue of Gandhi cuts a rather solitary figure against the hulking backdrop of the Bay Bridge. It’s worth dropping by at dusk, as we did, to check out the necklace of lights on the newly renovated bridge, which connects with Oakland and Berkeley.

All this is at Bay Level. You should never leave San Francisco without hitting the heights in the ‘City of 43 Hills’. Though I wouldn’t recommend driving – or trusting your handbrake – on those dizzyingly steep gradients around Russian Hill or Telegraph Hill you can’t miss the stupendous views of the Golden Gate Bridge, Alcatraz and the distant Marin Headlands or Oakland across the Bay and the locations for countless movies from Hitchcock’s Vertigo to Mrs Doubtfire.

If your calves can’t take the strain, Russian Hill is easily accessed by taking one of the city’s famous Cable Cars from Hyde near The Wharf, but be warned – you may face a long queue. Once up there enjoy the eclectic mishmash of architectural styles, all beyond the purse now of all save the mega-rich.

While there seek out ‘Barbary Lane’, a fictional thoroughfare in Tales Of The City, Armistead Maupin's chronicles of gay life. In real life it’s leafy, laid-back Macondray Lane, a clapboard country escape in the city. Classic San Francisco. Polk Street, or Polk Gulch, is no escape route. It’s a more streetwise, less elevated (in every sense) neighbour of Russian Hill. We loved  its quirky range of restaurants, cafes and cocktail bars. In its time it has been dubbed Polkstrasse because it was the main commercial street for SF’s German community, then in edgier times from the 1950s to the 1980s it was the city’s low rent gay neighbourhood. These days gentrification is afoot but its still laidback and cool. The ‘Gulch’ is a wry nickname because the street runs over an old stream at the bottom of a gently-sloped valley.

We set up Russian Hill base camp at 2255 Polk Street in Woods Polk Station, the tiniest of micro bars serving some seriously adventurous small batch craft beers. Nibblin gon artisan empanadas and sipping a MateVeza, an IPA made with yerba mate, the tackier Disneylike excesses of Fisherman’s Wharf seemed a world away, not 20 minutes stroll.. Life’s rich tapestry by the Bay.

A CityPASS is a valuable aid to getting around San Francisco, including free travel on the legendary Cable Cars and entry to attractions such as the Aquarium of the Bay and the Blue Fleet Cruise Adventures. Prices from $69.75.

To plan your trip of a lifetime go to Visit USA.

A variety of airlines have services to San Francisco from the UK, including British Airways, Virgin, American Airlines and Thomas Cook.

Neil Sowerby’s san Francisco car hire and for the rest of his US West Coast road trip was booked through Affordable Car Hire.