'My palms are sweating. What have we done?' - Dakota Bar & Grill, Greek St, reviewed

As a rule of thumb, I don’t like hotel restaurants. For starters, they are almost always built to scale the number of rooms as closely as possible, which means they’re massive and 80% empty most of the time. They also have a tendency to play insipid lift music and be poorly decorated. And that’s before you’ve even get to the food.

My wife stayed at Dakota last year though and said it was a superb hotel – and the absolutely never-ever-wrong TripAdvisor reviews reckon the restaurant is ace. So, we head down with open minds, empty stomachs and crossed fingers, hoping that we’ll be proven wrong.

Before we even make it downstairs to the restaurant, I’ve ticked off one of my three irritations with a horrendous Trustafarian gap-year student cover of Rihanna’s Umbrella. I’m immediately nervous, and the layout practically has me rocking in my seat as repressed memories of two dreadful trips to The Ivy come flooding back to me.

As predicted, we represent 30% of the guests in the restaurant, with just seven out of about four thousand seven hundred available seats filled. My palms are sweating. What have we done?

We’re presented with a Venetian Dip as a pre-starter. I’m pretty sure it’s actually a carton of passata with a large bit of goat’s cheese on top. Fair enough – two Rennies before the starters it is, then.

I also get a few oysters in (6 for £25) as oysters are digested in a separate stomach, so don’t count as a starter. These are particularly fat and flavoursome, served with the usual pickled, spicy pimped-up options. Seventeen drops of tabasco per oyster ought to see off my heartburn.

For starters, my partner orders some perfectly flash-fried scallops (£14), with an excellent, earthy aubergine purée and a satisfyingly crunchy scattering of pancetta. Meanwhile, I have wafer-thin slices of smoked venison (£9), which are delicious, but slightly overpowered by the accompanying celeriac remoulade. My palms have dried up – the starters are actually rather good.

The most noticeable feature of the menu is that it looks extremely similar to Stockdales’ – it’s like they were consultants (which would be odd, seeing as they’re about 200 yards away). It’s also a dangerous approach, bearing in mind how utterly brilliant the food is just down the road – particularly the steaks.

I’ve got a 500g T-Bone (£38) and it’s a beast of a thing, perfectly cooked and served with a banging Béarnaise. The small tenderloin section is almost tear-jerkingly tender. I have to say I’m a mixture of impressed and relieved. My partner has the fillet (£32), which is as delicate as you’d want, with the peppercorn sauce adding a bit of punch. It’s perhaps a touch overdone, but marginal if anything.

We also follow one of the most recent side dish trends and have truffle and Pecorino fries (£5). These are some of the best I’ve had. It’s famously difficult not to overdo it with truffle oil, but they’ve got it just right.

The onion rings (£4.50), though, are a let-down. They’re absolutely massive, which is great for a game of hoopla, but I’ve bought plastic hoops that taste more of onion.

We’ve splashed out with the wine, opting for a bottle of Pinot Noir Block 22 (£55), which is magnificently full-bodied and fruity, with a long, smooth aftertaste. It’s perfect for a more delicately flavoured, leaner cut of meat like a fillet.

I don’t have much of a sweet tooth, but one of my top three desserts is on the menu, so I’m swayed. If you wouldn’t trust your child to go out skating on the top of a crème brûlée (£7), then it hasn’t been done right. Dakota’s withstands a few satisfying thwacks with the back of my spoon and then reveals a dark, smooth custard underneath. Those skating children would be lucky to drown in it, to be honest.

Unfortunately, I’m not so enamoured with the paired Sauternes (£10) – it’s a touch too acidic. However, in the great game of dish vs. dish, I’ve absolutely smashed my other half. Her lemon tart (£8) is dense, dry and flabby. The limoncello pairing (£4) is a bit fairy-liquidy too. Victory is mine.

We finish up with a couple of flat whites (£4) and head upstairs to grab an Uber home. My wife is asleep within about ten seconds of getting into the cab, and I’m left to reflect. I was apprehensive, but the food, particularly the steaks, proved me wrong. Ok, there were a couple of blips, but in the main, the presentation, the quality – and the bill – were pretty high-end.

The difficulty with Dakota is that it isn’t Stockdales – and with both costing similar amounts, I’d never go back. Call me harsh, but if I’m spending £200, I reserve the right to be pretty damned selective. 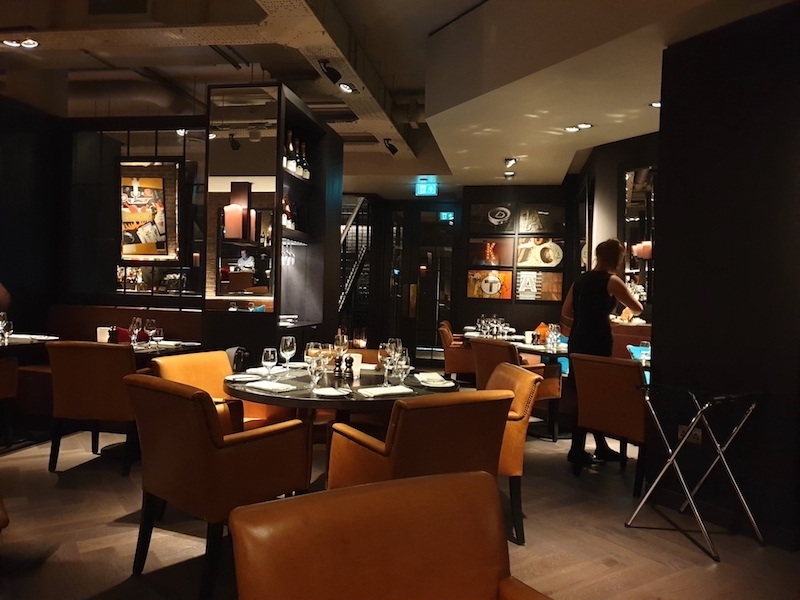