'On its way to being up there with the best' - Black Market, Chapel Allerton, reviewed

If small plates are dead, this is a pretty good legacy to leave, says Thom Archer

Poor Chapel Allerton - I know; three words you don’t usually see sharing close quarters, but spare a thought for the suburb. Just months after they get their very own cool, independent, and on-trend restaurants does a writer from The Guardian, of all places, come along and declare those particular trends to be dead.

What a knife in the back to a neighbourhood where the streets are paved with Observer Food supplements (metaphorically speaking; they're actually woven into natural wine carrier and dungarees for kids with posh names.)

Of course, for as long as small plates have been around there’s always been naysayers - pretending to be bemused by the quirks as an excuse to reel off their McIntyre-esque observational routines:

"What's the deal with the waiter attempting to explain 'the concept'?"

"But you never know how much to order."

Maybe you should've listened to your waiter rather than scribbling witticisms down in your notes app.

"You have to cut the portions up to share them."

What are you accustomed to doing in other restaurants? Gulping the thing down whole like a sea-lion swallowing a sword?

This, though, was the first time a proper, bonafide industry savant has gone all Nostradamus on the “concept”, and - combined with the fact that it was inspired by the downfall of small-plates pioneer Polpo - it feels like it could be tide-turning time in tapas town. Which is unfortunate for Black Market, a restaurant that, having opened late last year, is on its way to being up there with the best of its peers.

Admittedly, it does concede to some of the more flawed conventions of the small plates gaff; our order takes an hour to arrive, and then it does so all at once - despite the server’s best attempt to send it out in stages. Complimentary snacks prevent us from gnawing on the coffee beans in our Espresso Martinis for sustenance while we wait, but a barrage of all dishes means that scoffing hot dishes, followed by cold ones, followed by hot ones that have gone cold isn’t the ideal way to enjoy the kitchen’s efforts

Menu descriptions fall into the non-verbose, itemised-ingredients category. “Pan roasted Guinea Fowl, butter bean casserole” and so on. That’s fine; I’m reading a menu, not The Kitchen Diaries, succinct is fine, a bit of mystery never hurt anybody.

“Shitake mushrooms, kale, truffle pecorino, smoked almonds, truffle mayonnaise” (£8.55) was the least descriptive of all, but that could be because the kitchen don't really know what it is either. It arrives as a plate containing a shiitake mushroom, two almonds, and a couple of kale scraps that wouldn’t even suffice as a fig-leaf for Piers Morgan, on a clump of mushroom compost. The flavours are good, I just don’t really know what I’m supposed to do with it.

There’s also a suggestion that menus spanning a range of cuisines lead to chefs spreading themselves too thin, which is based in logic; master of none and all that, but good dishes aren’t reserved for chefs who specialise in one specific task like a workstation on an assembly line.

Techniques and flavours have common cousins and analogues in cultures all over the world - It’s not a huge stretch to be able to notice the similarities in, say, horseradish and wasabi, or one type of batter and another - and Black House’s kitchen shows knowledge and proficiency in a breadth of them; comparing and contrasting and substituting them in to highlight their individual quirks.

A golden-hour tint of cumin and the crackle of its seeds against crisp-fried jersey royals and lively, barely-wilted baby spinach leaves create a fresher, more vibrant “Sag Aloo” (£4.75) than the reliable Sunday evening comfort-stodge I associate the name with.

Nostalgia is prodded by monkfish cheeks (£7.95) served with pea porridge and parma ham. It’s fish and chips, mushy peas, and scraps via Japanese panko breadcrumb to add earth-shaking crunch, catapulted back into gastropub territory onto a tousle of shredded Savoy cabbage spun through in a tartare sauce emulsion.

The other highlight is hefty slices of lamb rump which have a pleasingly brash char on the edge - but remain Monopoly-money pink inside. They come with velvety pistachio puree and red pepper coulis; I use the fat end of a tender stem of broccoli (£3.75) as a paintbrush, mixing the two colours together into a kind-of romesco before using it for a self-portrait, painting my own face with the stuff.

This kitchen cooks at its best when it manages to harness its creativity in dishes like this, rather than in mushroom clutter or our “Pineapple Express” (£6.50) a dessert which combines disparate elements of pineapple, balsamic, and ginger - it’s imperfect and self-conscious, but infinitely scoffable; give me this over a safe option any day.

Rumours of small plates’ death may be greatly exaggerated, but even if it is time to move on, then honest, creative, and genuinely fun informal restaurants like Black Market are a great legacy to leave behind. 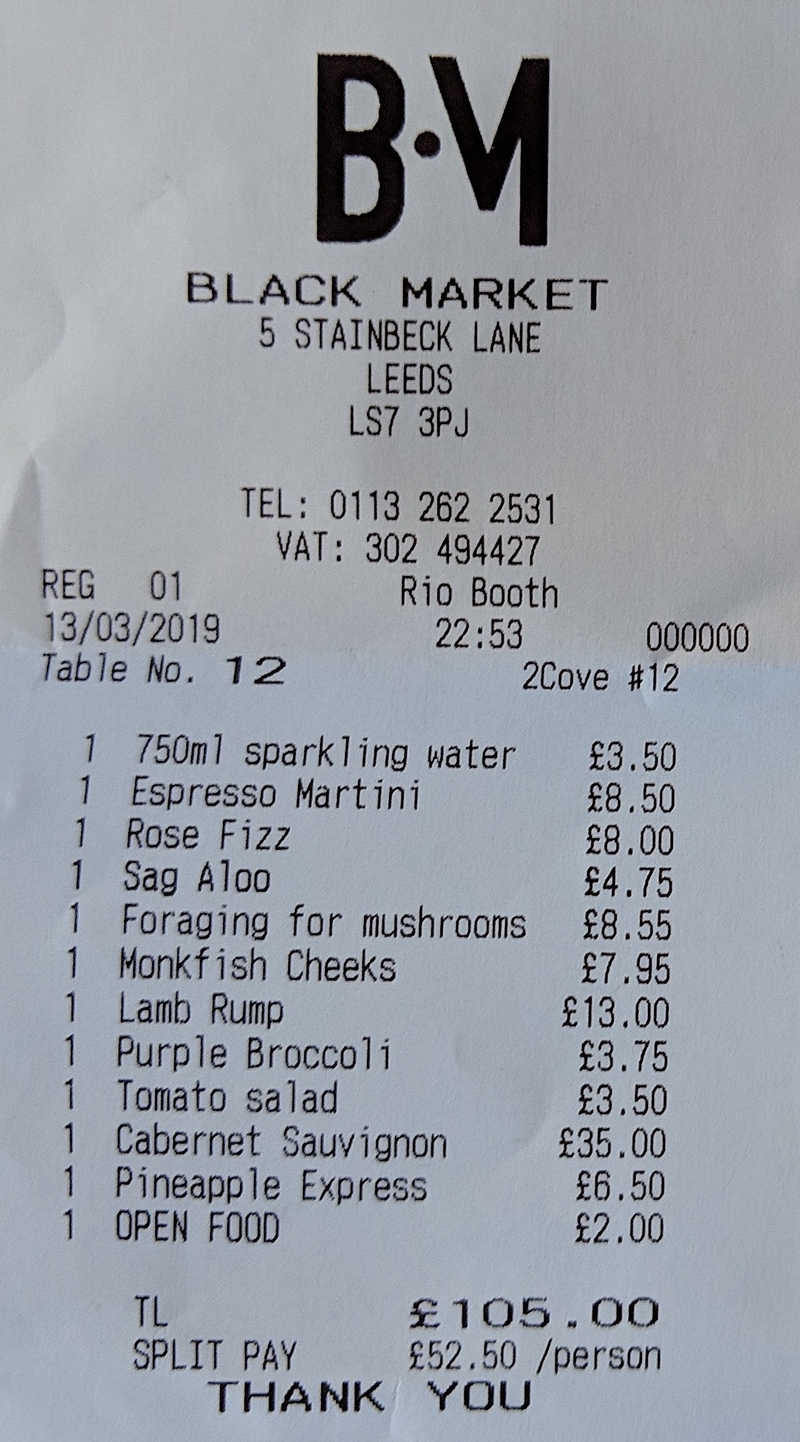