WE’VE got pockets of airy, pillowy bread and pure keeping-the-mood-in holiday level bliss. A bacon classic done the best way it can be done, a cross-Channel favourite (while we still can) and ocean-fresh oysters in the middle of a market… and that's just a taster of our favourite dishes.

The Confidentials team recommend their super seven for September. 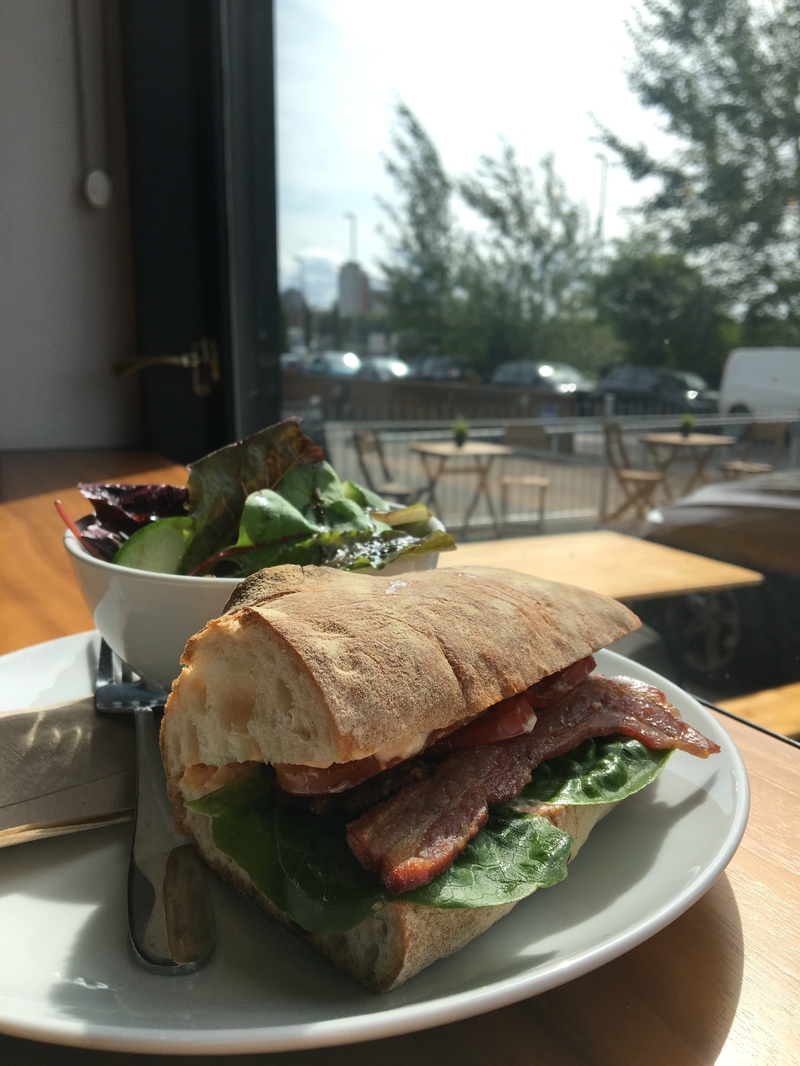 I’m not really a meaty kinda gal. I’d rather have a cauliflower steak than a sirloin, a beetroot burger than a beef, half my bones are broccoli, and a BBQ sings ‘Hallou-is-it-mi you’re looking for?’ And yet I was just doing a bit of work, living my best freelance life in a café, when I saw, on the counter, wrapped in brown paper… a BLT. The baguette was crusty and floured, spicy mayo hanging in the air pockets over them juicy tomato slices and… bacon. Not your flabby mcflabby kind, the dark streaky good stuff. Mind. Blown. And it’s not even the weekend. Sarah Cotterill 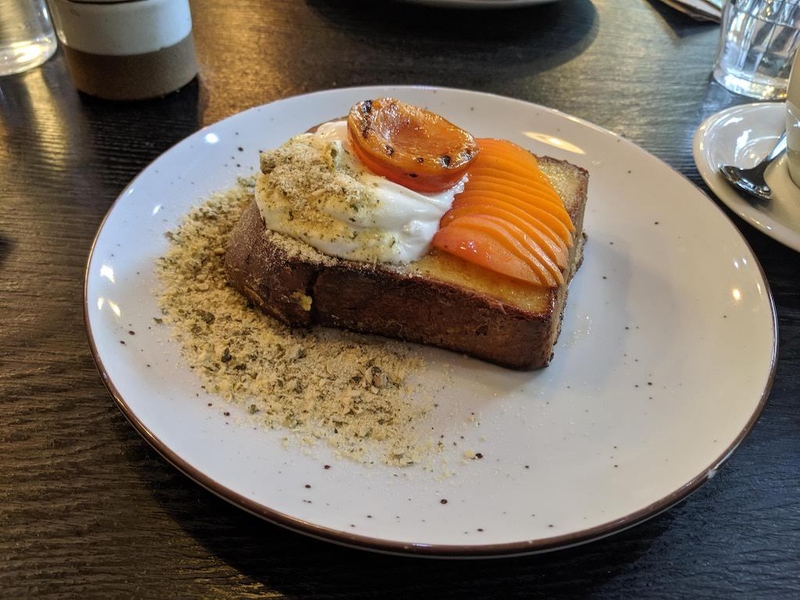 When the weather can best be described as ‘clammy’, I can’t be the only one who harbours a tiny, sneaky hankering for autumn. Not the grey skies so much, but the return of my appetite, the hearty, cosy brunches that steal the chill from outside. I was afforded one such opportunity on a dull day last month with North Star’s French Toast. Deliciously September-like with its roasted apricots, ginger syrup and pumpkin seed brittle, the pillowy brioche is tempered by an almond crème pâtissière that has just the right amount of sourness, and, of course, North Star’s excellently woody coffee. Sure, it’s a bit naughty, but I’m all about stockpiling for winter. Jenessa Williams 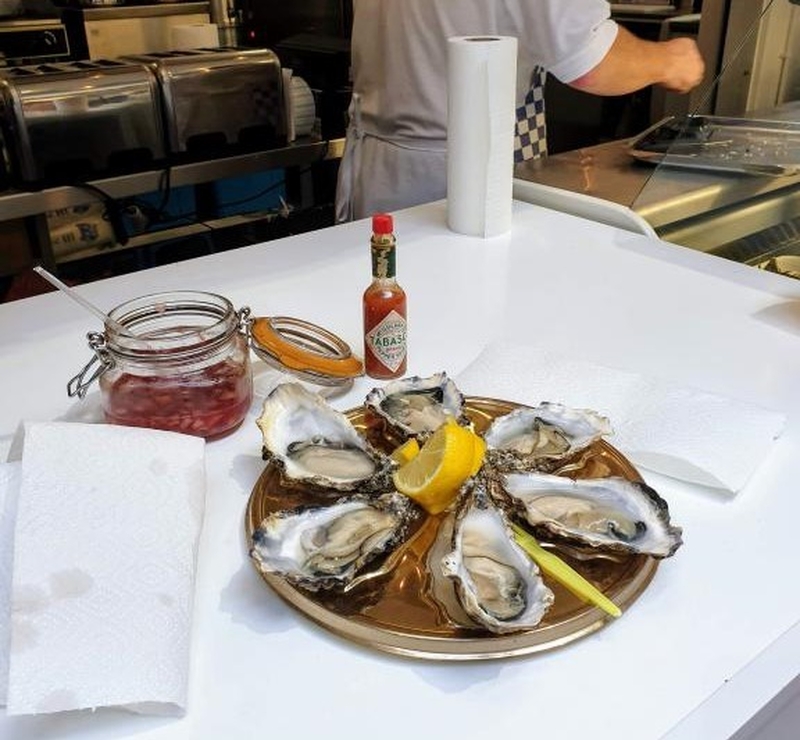 For too long now, I’ve walked through the endless expanse of Leeds Market, wishing I was somewhere else. My mind wanders to the colourful chaos of Barcelona’s La Boqueria, the foodie paradise of London’s Borough Market, or the refined fine-dining magic of Lisbon’s Time Out Market. Why can’t we do that in Leeds? Well, things are slowly changing. The food hall, such a case of so-near-so-far when it opened, is getting more crowded, Café Moor is adding the exotic colour at the top end of the market, and Liz Cottam is swooping in like a foodie Wonder Woman to bolster food and booze options. But me, I want to be in the midst of it while I eat. So, the simple pleasure of six oysters – big buggers too – being shucked right in front of me as I watch the fish traders do their thing, is pure holiday-level bliss. There are two stalls, you get a napkin, a jar of pickled shallots, a wedge of lemon and a bottle of Tabasco, and then you have at it as the noise of the day’s catch rings around you. May it only get louder. Simon Richardson 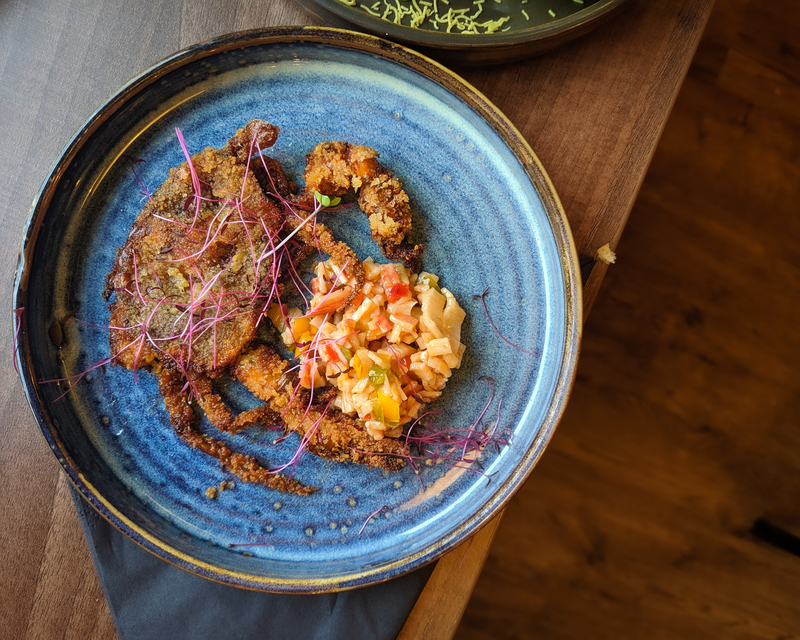 As Leeds’ first foray into Goan restaurants, De Baga is repping a region of India famous for its coast and beaches. The pressure’s on to not cock up the seafood then – and they don’t. The meal (proper review coming soon) is a series of highlights, but the standout is a sambal-marinated soft shell crab, served whole, alongside a milky, fresh crab meat salad. The kind of dish that makes you head straight to Skyscanner. Thom Archer 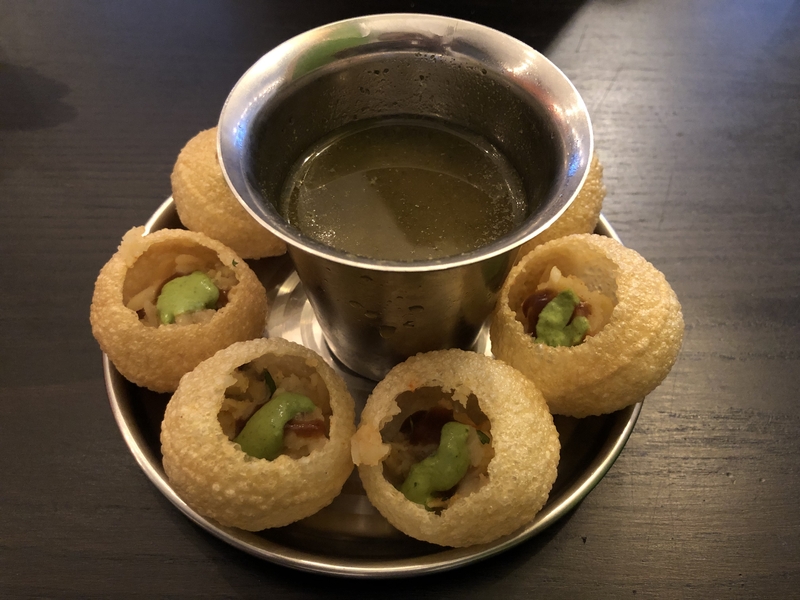 Recently I’ve been taking evening strolls near my apartment, heading away from the city centre. This is how I discovered Singh’s, a no-frills restaurant boasting some of the best Indian street food in Leeds. The entire area is packed with brilliant eateries and shisha bars, all nestled among tile and carpet warehouses. Pani Puri (golgappa) is one of the best-loved street food dishes of the Indian Subcontinent. I’ve seen it bastardised by poor street food concepts, but at last I’ve found the real deal. Crisp fried puri forms a hard shell encasing fluffy chickpea and potato mixture. This is topped with dollops of sweet chutney and spicy coriander, mint and chilli chutney. Submerge each vessel in the delicate tamarind water and wonder at its structural integrity. This is one sturdy snack. Eat in one bite for a flavour bomb that’ll knock your little gourmand socks off. This is a great spot for anyone looking to break away from some of the more Westernised curry houses in Leeds – be sure to have a wander and see what else you find in the area. Hint, Mydonose Turkish Food Store is moments away; they bake fresh pide every day. You’re welcome. Anja Madhvani 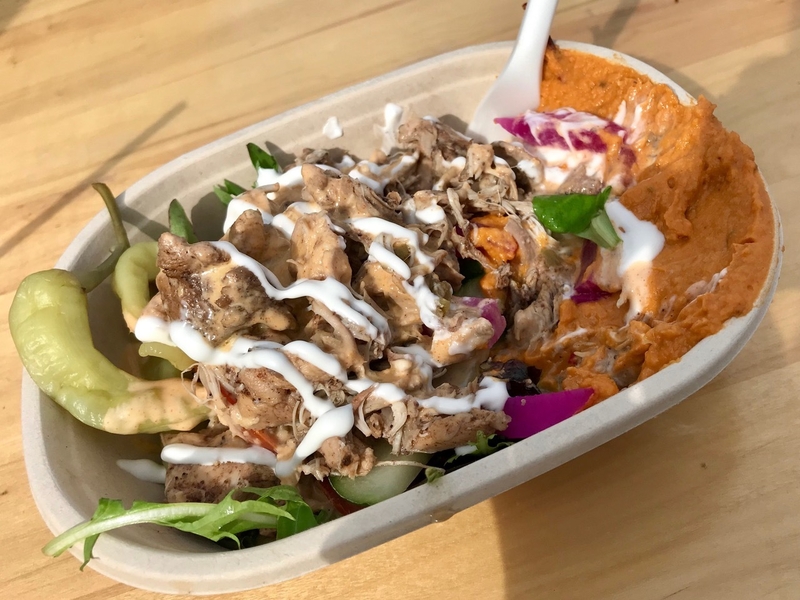 The best thing about food like this is its simplicity. It doesn’t need over-engineering or over-complicating – get fresh enough, yummy enough ingredients and the flavours will speak for themselves. The Falafel Boys’ van is a near-permanent fixture down on Briggate, but I caught them on a late August Saturday at Eat North. They served me a mountain of fresh salad topped with spicy, terracotta-coloured hummus and a generous spoon of tender chicken – finished with a combination of tahini and yogurt to lift the flavour and lighten the texture. Kate Ryrie 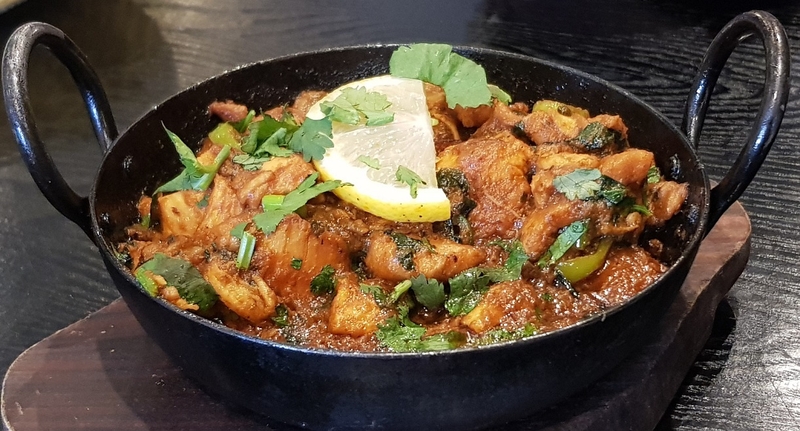 The term ‘institution’ can get bandied about a little too loosely in this restaurant-reviewing malarkey, but with over 40 years under its belt serving up fiery classics from northern India, it’s a fitting title for The International, up there on the fringes of Bradford’s University District. Recently reopened following a lengthy refurb (inspired, I’m guessing, by the local council’s zero-stars hygiene rating), the toilets may no longer be, to quote a local, ‘disgusting’, and the pickle tray no longer complimentary, but, thankfully, curries remain resolutely old school. In a triumphant return, I reacquaint myself with the addictive Karahi Chicken twice in one ghee-addled week. Its thick, dry sauce grips rather than smothers the cubed meat, and an earthy, slow-burning heat comes from layers of spice and vibrant fresh green chillies. This is a textbook example of the famous Bradford Curry. Yes, that’s a thing. As is the law, chapattis are included. Richard Miller