If you’re an established beer drinker, chances are you’ll have been to Pudsey beer festival. Perhaps you’ve been to Pudsey park in the spring, when all the flowers are in bloom. If not, then the rest of you will at least be familiar with Pudsey Bear, so famously named after the town back in 1985.

What you might be less familiar with, is Pudsey’s food scene. Not only is there a thriving market, but one of the branches of fish 'n’ chip giant The Wetherby Whaler is on Lowtown, a mere hop, skip and a jump away from Gigi’s, a very pleasant Italian on Lidget Hill. Go along a little further though, just past the park, and you’ll find 7 Steps. The question is: is it worth that extra half mile?

Immediate impressions of 7 Steps are somewhat mixed. The place was first recommended to me at a Leeds Indie Food event last year, sold as a fine dining establishment. As I arrive, I’m greeted by the sight of the old Conservative Club, built in 1898, with huge windows and impressive entrance. But it’s been somewhat spoiled by large Sky Sports banners plastered garishly across its midriff like a novelty belt.

It’s a mixed bag on the inside too, with the natural beauty of the interior diluted by large blackboards with a generic pub typescript crassly slapped all over. I can’t help but feel a little apprehensive, but am jolted swiftly back to reality by a room that’s packed full of extremely happy diners and a buzzing but relaxed atmosphere, complemented by friendly, attentive waiting staff. If we hadn’t booked, we certainly wouldn’t have got in. But it’s a Wednesday… in Pudsey. What is this witchcraft?

We whet our appetites with a gin and tonic, served in the now-obligatory copa glass, and an impossibly sweet prosecco and elderflower cocktail. The menus themselves are a bit drab, but the words do a dance of deliciousness across the page. This is more like it.

Crab risotto (£6.95) is cooked to perfection. Far from the comfort-eating stodge of homemade winter risottos gone by, it’s light and fluffy, given an extra burst of freshness with lemon and coriander. The word “crab” must have been a typo though – or it had scuttled on to someone else’s plate.

I go for pigeon breast (£6.50) and get smacked in the face by a massive ball of jealousy when my partner tries it. It’s wonderful – the delicate meat not overpowered by a bed of meaty wild mushrooms and a rich, yet light and creamy sauce that teases my sense of smell with the other-worldly aroma of truffle oil.

On to the mains. It’s steak night – this could explain why it’s so busy – so I order the fillet (£18). For a man who likes his steak either blue or extremely rare, ordering a steak in a restaurant is a nerve-wracking experience. Time and time again I’ve had to send back medium-cooked steaks to kitchens who are simply afraid to listen to their customers. I have no such problems here though; my knife sinks into the meat as if it’s falling into bed after a long day at work and I’ve eaten all the duck fat chips long before my brain reminds me that I’m supposed to savour everything.

My partner has the Turbot (£17.95), which splits opinion; I like it, but she thinks it’s overcooked. We both agree that the sauce is a bit watery and the lemon and caper garnish is a touch too acidic.

The wine is a big let-down. The Malbec (£6.95) is vinegary and the white Rioja (£6.95) is far too sharp. I feel like 7 Steps have underestimated the quality of their food to not be offering a far superior selection of wines.

We finish with a textbook sticky toffee pudding (£5.50) and a baked Alaska (£5.50), which has been blowtorched rather than baked, and is too runny as a result.

7 Steps is a bit of a hidden gem if you’re a city centre stalwart, despite being so easily accessible on the number 4 bus. It’s certainly not perfect – the aesthetics are a little off and the wine needs a rethink – but when it gets it right, it gets it very right.

The atmosphere and the service have to be some of the most pleasant I’ve ever experienced in the Leeds area, and the idea of being able to get a sizeable fillet steak of that quality for under twenty quid almost defies logic. Plus the fact that I can run there from home in under twenty minutes means that I’ll be spending several more hours here over the coming months, exploring the other potential delights of the menu. I recommend you join me. 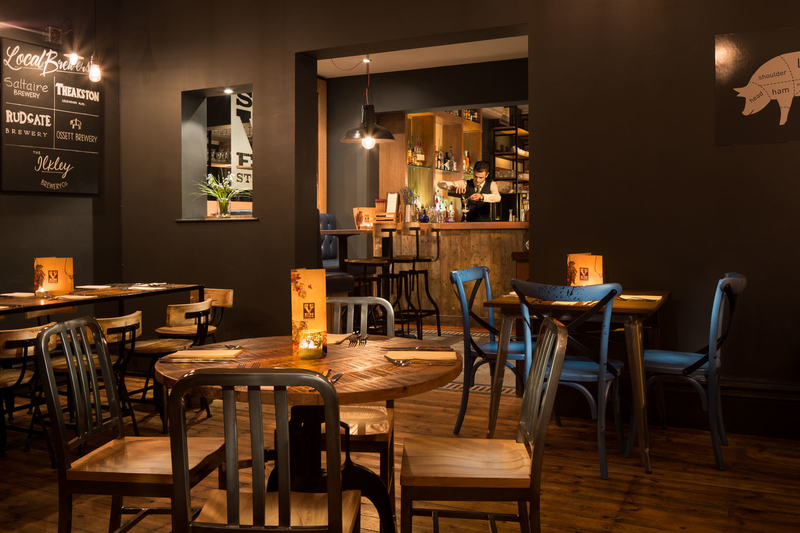