This weekend: St Luke's bombed out church reopens with a party

Orchestra and choir perform Sgt Pepper. Plus a picnic - with a bar

IT was a long, drawn out campaign. It was exhausting for those who took part. And as for the result? “Unexpected” hardly seems to cover it.

When the Bombed Out Church and its gardens closed for essential repairs in September 2015, there were many who felt that its community-based events programme – including cinema screenings, workshops, parties and festivals – was gone for good. With Liverpool City Council inviting tenders from commercial operators, it seemed that the church’s distinctive Blitz-damaged skeleton would form the bones of a new stag-and-hen hotel or similarly soul-crushing “leisure destination” before long.

For that reason, there were plenty of smiles in the city when, after an extended bidding process, it was finally announced that Ambrose Reynolds – whose Urban Strawberry Lunch group had looked after St Luke’s since 2007 – would once again hold the keys to the Leece Street landmark. Having set up a new community interest company with Mark Hensby of Liverpool Organic Brewery – not to mention the moral support of a chunk of the Liverpool public – Reynolds now has a 30-year lease on the building and is ready to relaunch it as “a distinctive space for arts and events”.

Read: Jubilant Ambrose Reynolds gets the keys to St Luke's for next 30 years

The new chapter begins this Saturday, June 17, when the Bombed Out Church’s gardens are reopened to the public for the first time in almost two years. With entertainment from the Stratford Festival Orchestra and Choir – performing a live version of an obscure lost record called Sgt Pepper’s Lonely Hearts Club Band – Reynolds describes the occasion as “a chance to start thanking all of the people who have backed us through this process”.

The orchestra and choir will perform two concerts at 1pm and 5pm. Tickets for the seated, fundraising event cost £15, although early bird deals are available for £10, and there will be a licensed bar and food available too.

Then on Sunday June 18, the gardens will be open for all to enjoy, with the gates thrown open from noon until 5pm. The event is free of charge and kicks off with a Traditional Chinese lion dance by Hung Gar Kung Fu Club.

"We invite poets, musicians, dancers, jugglers and artists to come and perform," say organisers. As for the public, they are "encouraged to bring their own blankets and seating to enjoy a relaxing afternoon in the gardens”. With a licensed bar and food available, all you need is the weather.

However, anyone wanting to wander down the church’s roofless nave once again will have to wait until July to enjoy the unique St Luke’s inside/outside experience. The new programme of exhibitions, theatre, cinema, weddings, parties and festivals should be up and running from the middle of next month.

In a time of unpredictable outcomes and skewered expectations, the return of the Bombed Out Church and its gardens feels a little like the resumption of normal service. In fact, it can only be a matter of time before those bomb-scarred walls – that once echoed with the hymns of congregations past – resonate with the sound of bongos once again.

Tickets for the opening event on Saturday June 17 are available on Eventbrite. For more information about the opening weekend, contact enquiries@bombedoutchurch.com. Or telephone/text 0771 432 8415 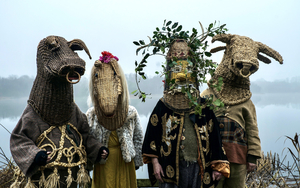