Is that down by the river, then?
Sherlock’s got nothing on you, mate. No views of the Mersey from your table but there’s a Travelodge across the car park, which might prove handy if you’ve absorbed the Melodias Trapiche Malbec’s plum and blackberry aromas a little too enthusiastically.

It’s a bit out of the way.
Not at all. Barely a scone’s throw from the city centre and not a traffic warden in sight. Parking is free and plentiful, with Brunswick train station a mere five-minute stroll.

What’s the story?
Mostly, it’s one of awards and more awards, including the Good Food Guide Reader’s Restaurant of the Year, no less. Candice Fonseca started the business in city centre Stanley Street (now Fonseca’s) in 2006 before shifting its main operation to Brunswick Dock where it has expanded in direct proportion to the waistlines of visitors to the restaurant and adjoining foodhall. 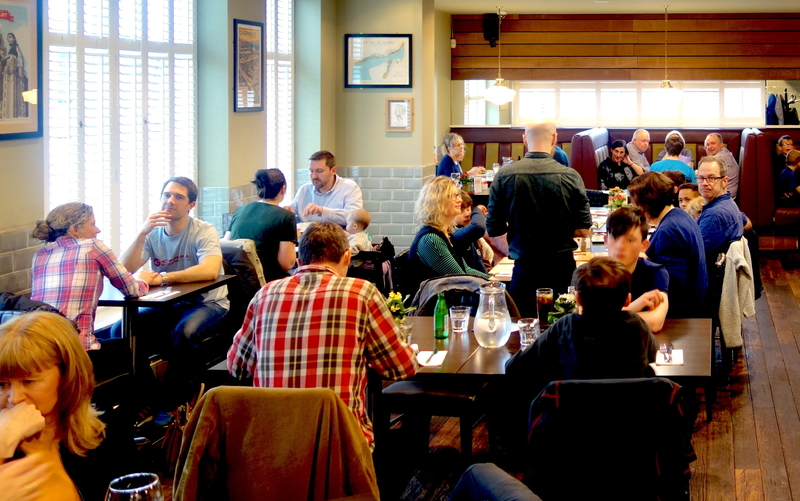 Go on then, what’s so good about it?
Well, it looks a treat, all greens and browns borrowed from nature’s palette, with the power to de-stress the distressed. Then there's the staff, dispensing affability and efficiency in equal measure, led by manager Tom Ford whose sense of the absurd is keener than a dish of Coleman’s English.

But mostly it’s to do with the food, homely and delicious, established by local food legend Martin Cooper and now delivered, day to day, by Head Chef Marc Lara. Add to that an extensively-stocked deli, incorporating the Liverpool outpost of celebrated Wirral butchers, Edge & Son, for all your smelly cheese and rare breed sausage needs.

It’s Sunday, I need cheering up, so it had better be good.
If only every day was like Sunday at Delifonseca, Morrissey would have had nothing to sing about. Delifonseca can disappoint a lot of people on the Sabbath, but only those who forget to book and turn up to find there are more diners than chairs to seat them.

“It’s heatbreaking,” says Tom, and he is only marginally overstating it.

Who goes there?
All sorts. Office workers and octogenarians and everyone betwixt. A fair few families this particular Sunday, spanning the generations, a couple of them holding court in high chairs, others singing Happy Birthday.

Hmm, and if you consider a plate of meat to be a murder scene?
Fear not, while there’s no nut roast as such, that aforementioned giant of gastronomy Martin Cooper has always catered for those of a PETA persuasion.

Try Spanish style stew of butter beans, chickpeas and red pepper, courgettes, aubergines and more, served with wild rice and home made puffy tortillas (£11.95). If the chickpeas were a tad al dente, this was a minor flaw in a dish of many riches, robustly spiced, earthy without feeling worthy (7/10).

The meat
Beef (9/10) turns out to be silverside, NOT, it has to be said, the obvious choice for a high end roast. But here it is given the silk purse treatment courtesy of marination and a long tenderising soak in a water bath before it is finished in the oven. It results in generous pink slabs of Welsh black beef with a lovely, open-grained texture and heaps of flavour.

Welsh lamb (9/10), sliced from the leg (below), is sweet and succulent, yielding and toothsome. 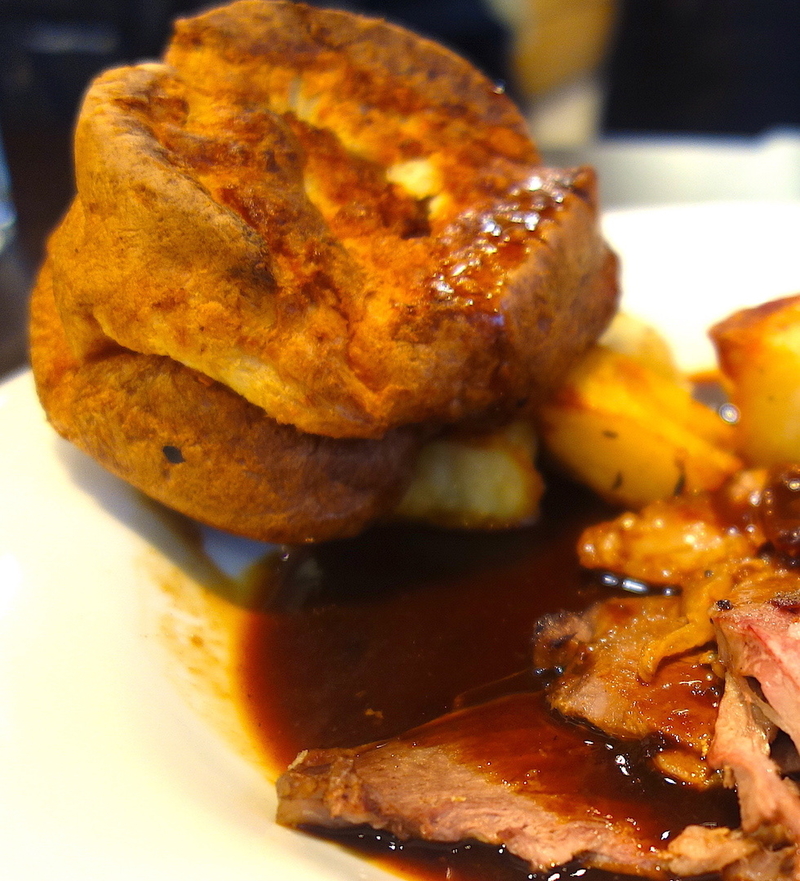 Yorkshire pud
These ugly beautiful creations are light and crisp on the outside, soft and doughy on the inside, just like they oughta be. (9.5/10)

The gravy
Actually it’s "jus", if it’s all the same to you. Similar outcome, different method. Here achieved by simmering copious beef bones (that’s where a butcher’s concession comes in handy) with carrots, onions, celery, garlic, fennel, turnips tops and goodness knows what, with enough red wine to fill a Widnes gas holder, then reduced down and reduced down, like the last thing to go in a shop closure clearance sale, until you are left with something that’s dark and rich and satisfying (8.5/10)

Spuds u like?
The one area where opinion is divided. We all agree these are perfectly respectable roasties. I feel they could be a little more floury, a little more crunchy. They think I’m out of my mind. Trust me, I’m right. (7/10)

Veg of Eden?
With a little added protein, this lot would be enough by itself to satisfy the pickiest vegetarian; parsnips are golden and caramelised, carrot and swede blitzed and buttered and lightly seasoned, ditto cabbage, beetroot halves roasted to perfection (9/10). 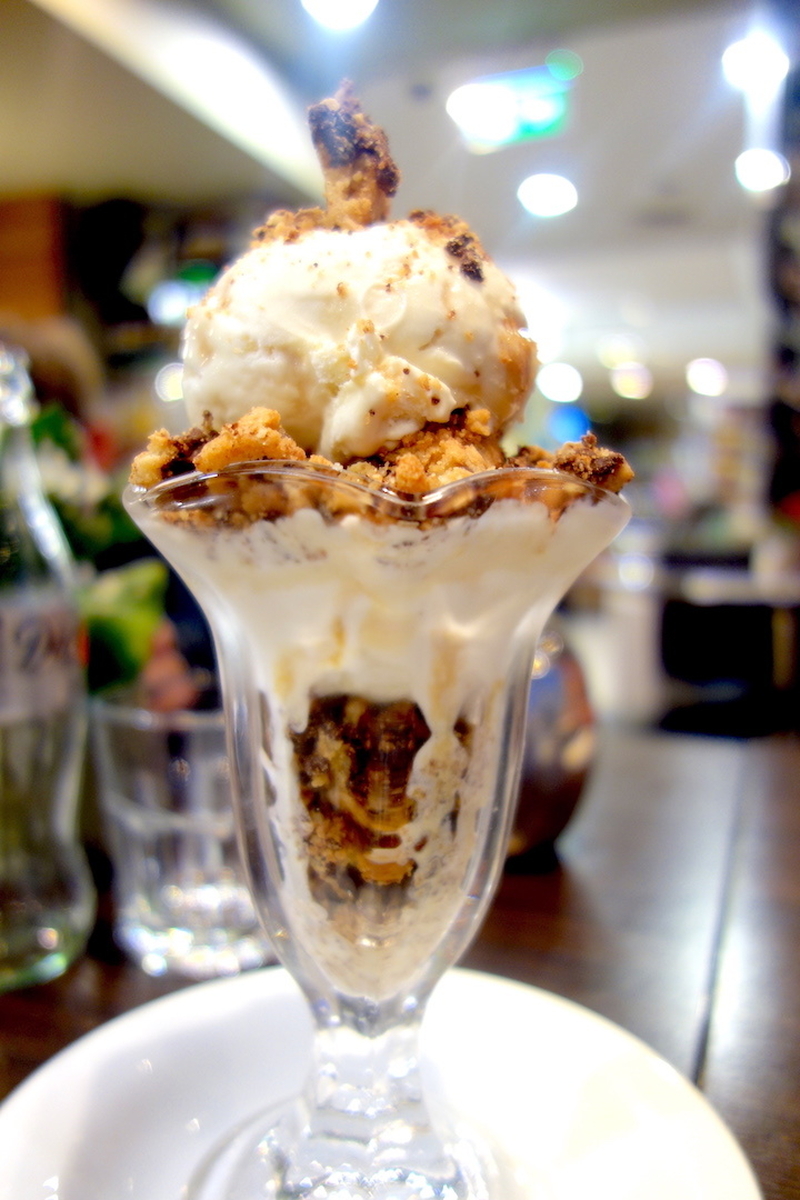 Happy ever afters?
Oh, yes, seeing as how desserts come courtesy of Claire Lara, wife of Marc, who does a bit of cooking herself. Well, she did win the 2010 series of Masterchef The Professionals.

Puds provided two ways to treat Sunday-induced melancholia. One, chocolate chip cookie and honeycomb sundae (8/10), a sugar high in a high glass, a lightning jolt of ice cream, shot through with shards of bashed-up biscuit, here a few grains, there a great wodge, because that’s the way the cookie crumbles.

The other, a big hug of an apple crumble (8.5/10), the topping wamed with ginger and cinnamon and whizzed to a fine crumb on the surface, denser and gentler where it meets the fruit, which is sublimely soft while just holding its shape, the whole surrounded by a moat of fine, skin-free custard.