Let me cut to the chase. Unless you’ve been holed up in a secret nuclear bunker for the last six months, you’ll know that the arrival of Mamasan Bar & Brasserie in Liverpool was met with more gushing hype than the birth of a Royal baby.

Merseyside is booming with new openings and Mamasan is the word on everyone’s lips. I’m including the people that call it “Massaman” too, because even a pedantic twat like me can forgive a slip of the tongue when one of their signature dishes is indeed a massaman curry.

You say Massaman, and I say Mamasan. Massaman. Mamasan. Let’s not call the whole thing off, just yet. On paper, this restaurant reads like the best backpacking holiday you never had. Thai chicken and prawn tacos; south Indian spiced cauliflower. Jungle curry, Burmese curry and Hanoi glass noodle salad. Take me to all of those places, right now.

The pictures of the original Mamasan in Glasgow look very classy and at first glance they’ve done a fantastic job of turning the former Wahaca Liverpool on College Lane into a Southeast Asian eaterie-cum-discotheque.

There’s an assortment of furniture styles to rival the Argos catalogue and the quality seems to improve the higher up you go. Mezzanine level looks like good solid stuff and possibly reserved for the very hip people who have come to drink exotic cocktails and dance on the tables to “starlight nu-boogie and Balearic beats”. (PR words, not mine.)

Us common folk get chairs that look like they came from the garden section of The Range. I know I’m wanging on about the furniture, but for a meal that rockets past the hundred quid mark, I don’t expect to sit on something that’s more awkward and wooden than the cast of Hollyoaks.

Which brings us to the prices. Mamasan is “exy”, as they say in Oz. Over here, we say “fucking expensive”. Cocktails arrive, an ice-heavy coconut and lime mojito (£10) and a watermelon pop (£12) plus a bowl of spiced nuts (£3.50). And that’s just one way of spunking £25 in ten minutes.

There is curried salt and pepper baby squid (£9), crispy curls scattered with chillies and spring onions, served with a “nouc cham” [sic] dipping sauce. I want to be whisked away to the markets of Vietnam, but so far I’m kind of stuck at Kenny’s chippy on Scottie Road.

From a different planet altogether is tuna tataki (£10.50), seared tuna belly, masterfully cooked and sliced, dotted with an orchestra of chargrilled watermelon, pickled cucumber, lobster bisque aioli and fiery sriracha. It’s perfect in every way and worth every penny.

Glasgow’s signature half or whole lobster was missing from the menu - probably a good thing for the bank balance, at least. So, it’s down to the green curry of monkfish tail and tiger prawns (£22) to hook me in. Fish is again perfectly cooked - although a bit tight on the portion size - an island of juicy monkfish and prawns in a luscious green lagoon of spiced coconut milk, charred courgette and aubergine. Not a drop is wasted.

Red curry of confit duck (£18) is a whopping roasted leg that wobbles on a scattering of pak choi and baby corn. The lucky dip of charred pineapple gives the sauce a sweet sensation and the dish is so nearly there - such a shame that the duck skin isn’t crisp, because that against the tender veg and rich curry would have been abso-quacking-lutely lovely.

Jasmine rice (£4) is adequate but if you’re going to charge £5 for a side of Asian greens, then you’d better make sure they’re on top form. A plate of boring old broccoli thrown onto some pak choi makes me want to march into the kitchen and slap the chef with a bunch of morning glory.

Desserts pull off elegance and absolute filth at the same time. Coconut and peanut butter chocolate delice (£8) is dark and devilish, served with pink fleshy peaches and a thick cloud of chestnut cream that inexplicably smells a bit like Parmesan cheese.

Nashi pear sticky toffee pudding (£8) concludes the Mamasan obsession with edible flowers and is a good combo of stodge and sweetness with a crunchy bottom. I’m not too sure about the spiced mascarpone though; for me, a warm pud should always be paired with ice cream.

Does Mamasan live up to the hype? Most of the time, yes. The prices are steep, but not stupid, so book a right royal visit for your next pay-day and bring your own cushion. 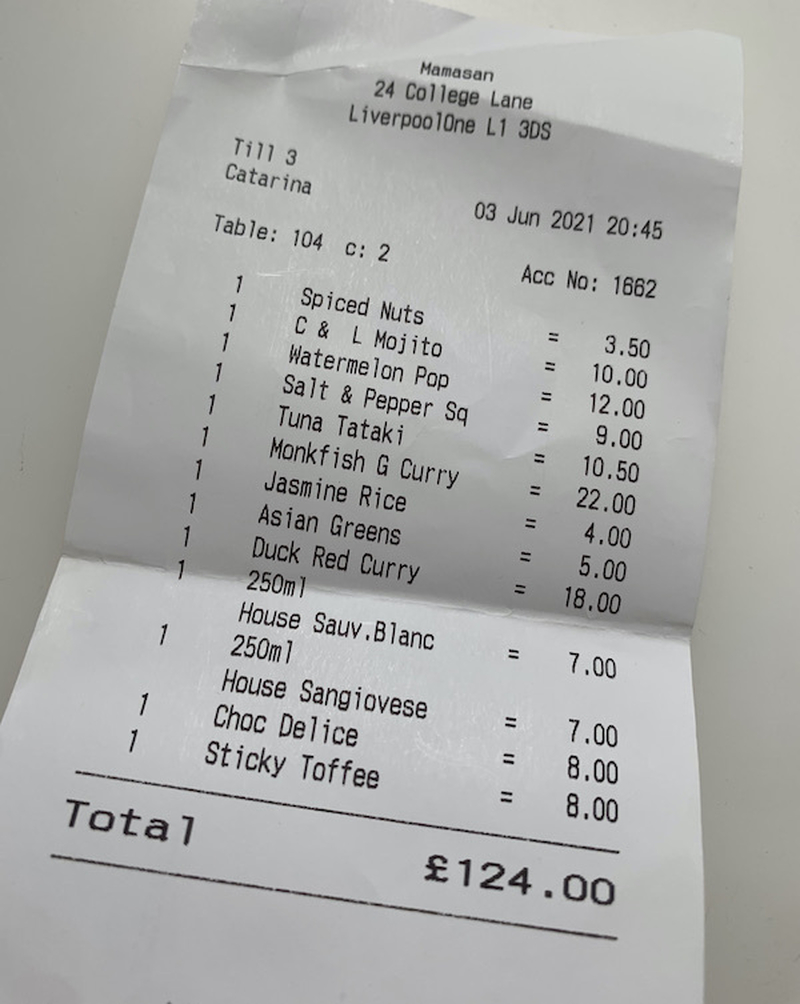