Hidden at the back of Liverpool One, it's everything you could want from a cafe, says Christina McDermott

CLEVELAND Square is one of those city centre hinterlands - on the edges of both Liverpool One and the Baltic Triangle - which it’s usually easy to pass by when you’re on the way to somewhere else.

But sometimes it’s nice to veer off the beaten track, particularly on a day when every cafe and bar on Bold Street is packed to the rafters with ladies that lunch and families that brunch. Which is how I found myself at The Cow & Co Cafe.

Exceptionally moist and not too sweet, it tasted like a perfectly made mug of masala chai

The cafe is part of an online design shop which styles itself as being a slightly more upmarket IKEA, and where you could all too easily find yourself spending a ridiculous amount of money on interestingly shaped lamps.

Situated in its own little nook (right next door to a dog grooming parlour if you fancy cooing over some freshly blow dried poodles while enjoying your morning coffee), on first appearances, it looks like the kind of place that would be more at home in Hackney than behind Liverpool One. Fashionable trinkets and independent magazines line the walls, the wooden tables and chairs look like they’ve been transported directly from the pages of a Swedish interior design manual and everything just feels effortlessly stylish. The whole effect is more Cos than Costa Coffee. 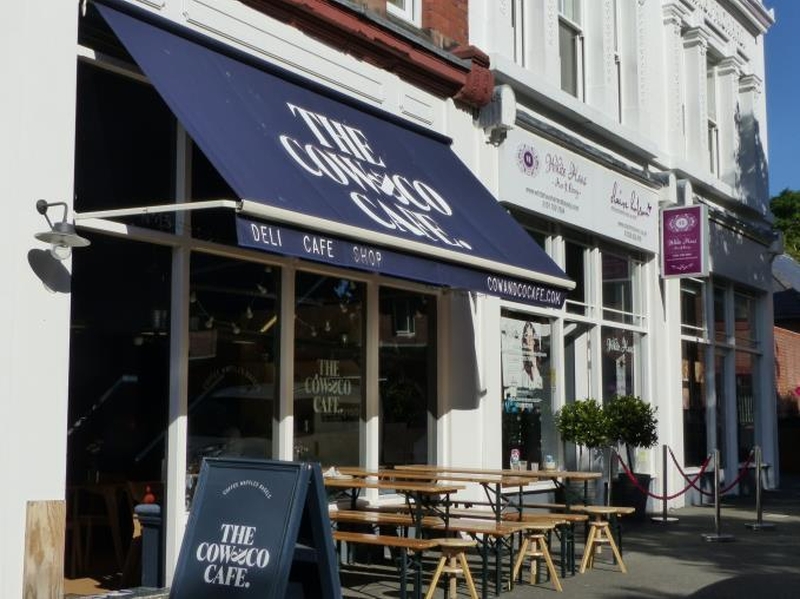 But don’t be fooled into thinking this is a place with more style than substance. When I visited, it was obvious that this is a bustling little neighbourhood cafe with more than its fair share of regulars.

The two girls behind the counter are pleasantly chirpy with one offering to remake my (perfectly made) flat white (£2.70) so it’s more ‘Instagram friendly’ when she spots me positioning it for a sneaky picture. And the food’s pretty decent too. While you won’t find anything more substantial than cakes and sandwiches, the selection on offer caters to meat eaters, vegetarians and vegans alike (they even do a vegan grilled cheese sarnie which includes kale, onion and chilli flakes and sounds pretty damn tasty.)

I decided to plump for the Halloumi, Fresh Mint, Harissa, Mayonnaise and Rocket sandwich (£4.45). You can choose to have your filling on bread, bagel or even a croissant, I’m a notoriously messy eater, so decided to play it safe by choosing rye bread which had been freshly baked that morning. While it could have used a dab more of the mint and harissa to cut through the salty, fatty halloumi cheese, the rye bread was the real star of the show here. All too often, it can be overly chewy, leaving you with an aching jaw and a heavy gut. Cow & Co’s is soft - almost bouncy - and just the thing if you’re in need of a sandwich which won’t dissolve into mush after one bite.

The selection of cakes is varied, if slightly heavy on the dessicated coconut. Being greedy (hey, it’s bloody cold out there at the moment) and in the interests of "research", I sampled two - a ginger crumble (£2.50) which sandwiched a thick layer of ginger jam between a wedge of shortbread and a buttery crumble, and a spiced coconut raspberry slice (£2.00) which was inarguably the star of the show. Exceptionally moist and not too sweet, it tasted like a perfectly made mug of masala chai. Paired with a cup of expertly made hot chocolate (£2.70), it’s just the thing to warm the cockles on a freezing January afternoon.

The only area that Cow & Co falls down on is warmth. I freely admit to being "nesh" as my grandad would say, but by the end of an afternoon working there, I could barely feel my hands. One can only presume that the staff there turn up to work in three layers of thermal undies, or are just impervious to the cold. Either that, or it’s just a devious way to get you to spend more on hot drinks.

Cow & Co is everything a person could want from a cafe, irrespective of whether you’re visiting with friends, family or just need somewhere cosy to sequester yourself in with your laptop. It’s stylish, it’s friendly and it serves really good cake. And if you get tired of caffeinated beverages,
you can even grab a beer from local independent brewery Mad Hatter.

It may be hidden away, but it’s definitely a gem.