CONSIDERING how good Liverpool’s savvy restaurateurs are at capitalising on the locals’ seemingly insatiable appetite for exotic cuisine, it’s surprising that it’s taken this long for a Vietnamese restaurant to appear on Bold Street. After all, the same road already has three burrito bars, two artisan bakeries (three if you count Greggs), two specialist supermarkets, an unspecified number of grilled chicken restaurants and a Lebanese venue whose signature dish is “disco cauliflower”.

It’s also surprising that Pho opened with relatively little fanfare. One day there was an advertisement saying it was on its way and before you could say Phở bò nấm trúng, it was open and slinging bowls of noodles at all comers. It was inevitable - since an English couple started the chain in London in 2005, Pho has been slowly snaking its way up north (already boasting outlets in Birmingham, Leeds and Manchester).

A riot of juicy aromatic pork meatballs, rice noodles, peanuts, fresh veggies and a nuoc cham side sauce was so good we could have drunk it straight from the bowl.

Having visited London and Manchester branches of Pho, they tend to be laid out from the same tasteful blueprints, although it doesn’t feel like a generic chain by any means. My hard-to-impress dining companion was suitably charmed by the giant bamboo lampshades that looked like props from Blakes 7, the Fela Kuti on the stereo and our delightful waitress’ (incredible) geometric Frida Kahlo tattoo. So far, so ambient.

To start, we ordered the Cánh gà (crispy chicken wings with sriracha - £6.75), Mực chiên giòn (deep fried baby squid with a salt, pepper and lime dip - £6.95) and Bánh xèo (a savoury crepe filled with chicken and prawns and served with rice paper and betel leaves - £7.95.) It is exceptionally difficult for deep fried things not to taste delicious and the juicy chicken wings and crisp, bouncy baby squid delivered and then some. We found ourselves scrapping over each tasty, tangy little morsel, swooping up bits of batter with our chopsticks and swiping them through the accompanying sauces. 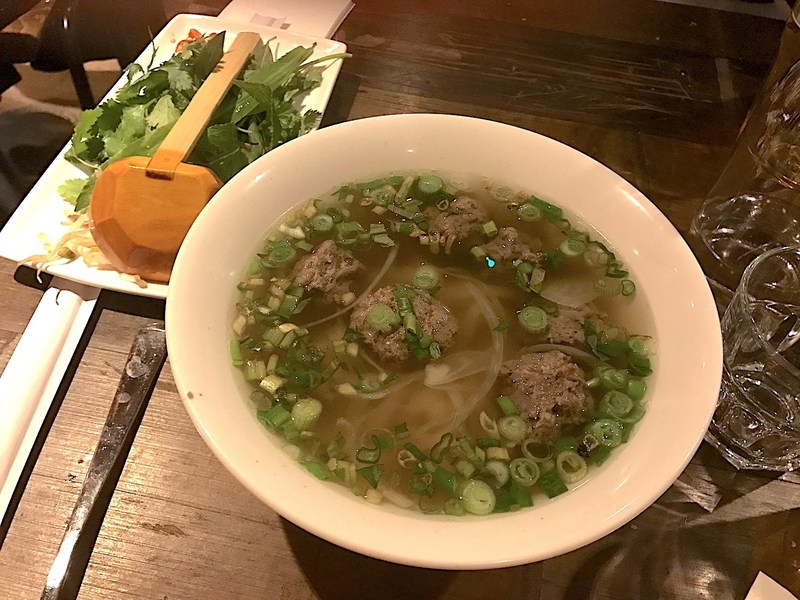 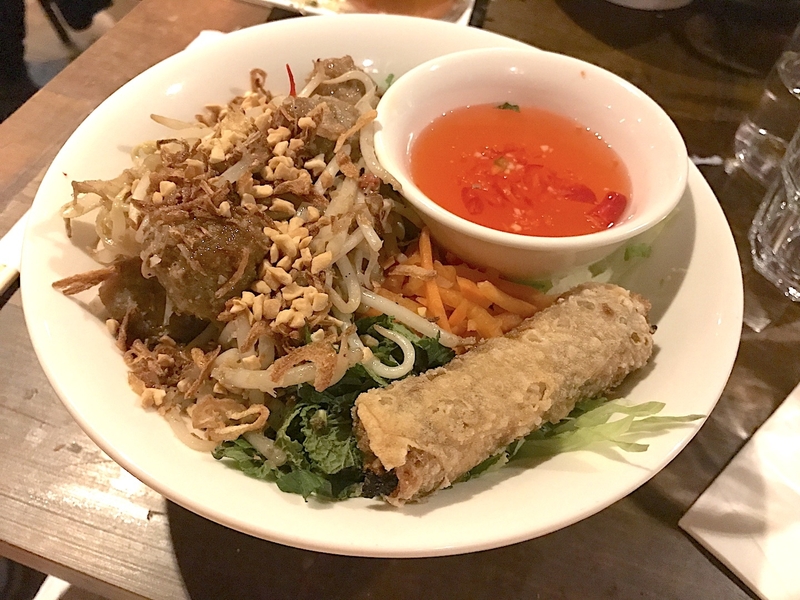 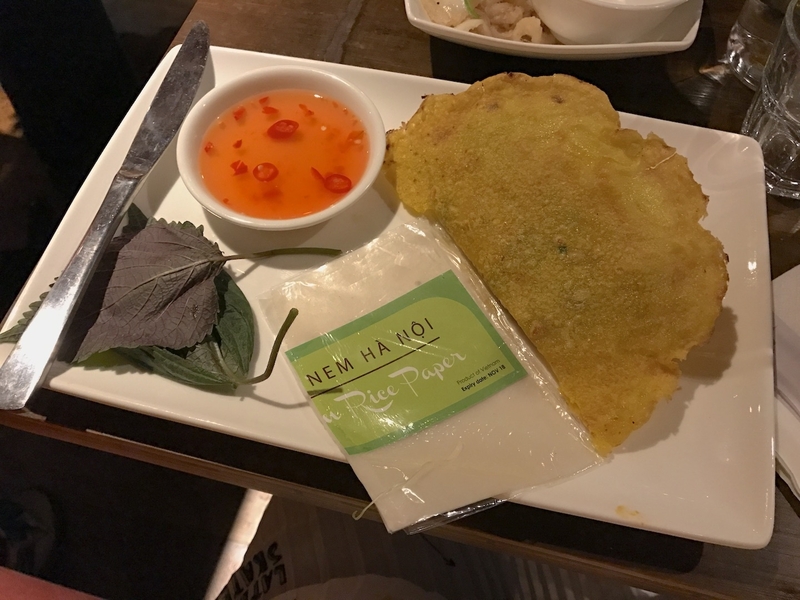 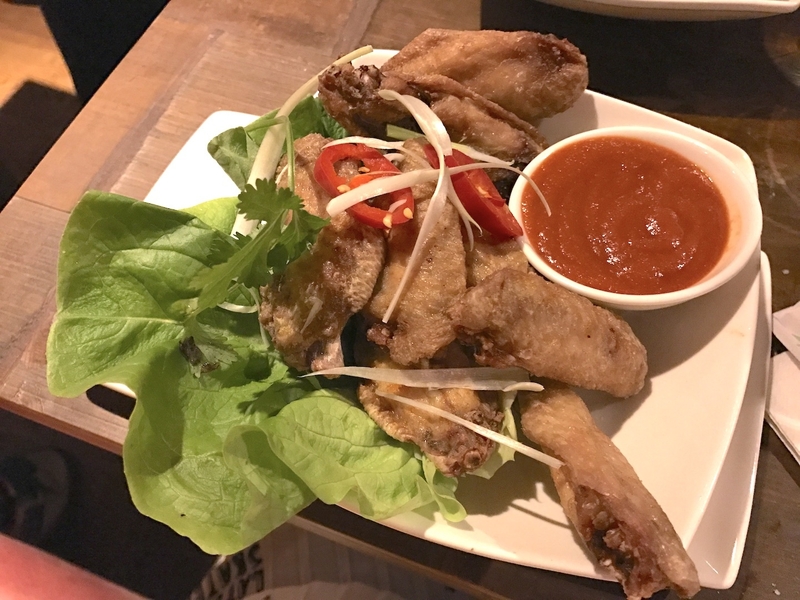 The Bánh xèo came with a packet of unprepared rice paper on the side and a set of instructions from our waitress. Snap off a piece of the crepe, add a betel leaf and then roll it up in the rice paper. I like a dish that requires a bit of audience participation, but it turns out that when you try to roll a crispy crepe up in it, unsoaked rice paper both reacts and then tastes like one of those fortune-telling cellophane fish you get in Christmas crackers. Great for arts and crafts perhaps, but not so appealing when it’s your dinner.

It would have been remiss of us to visit a restaurant named Pho and not try some of its eponymous dish. My companion adored his bowl of Phở bò viên (£8.50), a pile of meatballs bobbing away merrily in a sea of gently scented, herb-strewn, noodly broth. Laden with lemongrass and Thai basil, they tasted far more delicate than their homely appearance suggested, although they would have benefited from a firmer hand with the seasoning.

However, the star of the meal was undoubtedly the Nem nuong pork balls bun bowl (£8.75). Averse as I am to all things “bowl food” (a terminology that stinks of the Instagram wellness guru), this was spring in a dish. A riot of juicy aromatic pork meatballs, rice noodles, peanuts, fresh veggies and a nuoc cham side sauce was so good we could have drunk it straight from the bowl. And just in case you were put off by how disgustingly healthy that all sounds, they even threw in a crispy deep fried veggie spring roll. How considerate, eh? 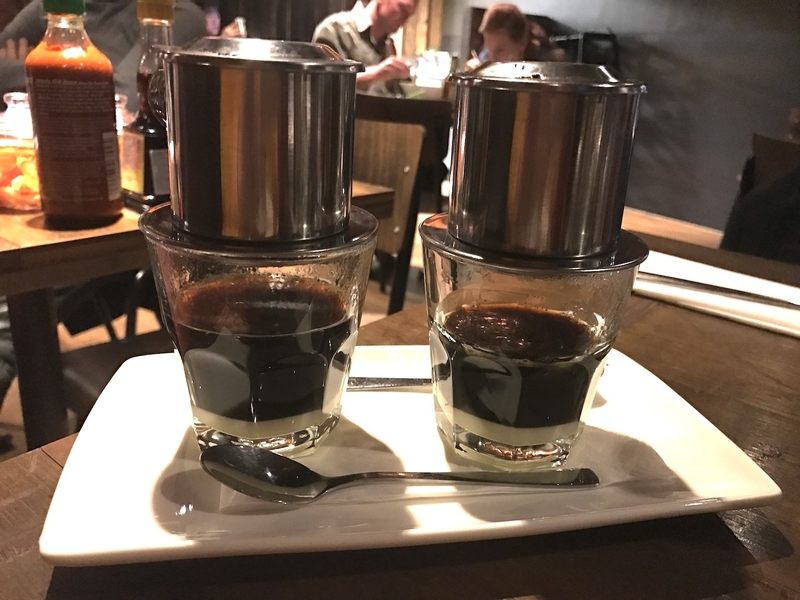 Two face-meltingly strong Vietnamese coffees (£2.50) came with a thick layer of condensed milk at the bottom. You allow the coffee to slowly drip into the glass and then stir, stir, stir to ensure that it and the sweetened milk are thoroughly combined. The effect is something akin to a quick jolt from jump wires attached to your nervous system, a vibrant electric shock of caffeine and sugar. It also comes in cocktail form (the table next to us knocked theirs back with gusto), but we decide that may be an adventure too far, as we both wanted to get some sleep in the next 72 hours.

Honey and ginger ice cream (£4.50) was an unassuming looking dessert that turned out to be full of crunch and caramelised ginger and tasted creamier than any chain restaurant’s frozen treat deserved to.

There are many arguments you could make against Pho - about the establishment of a chain restaurant on a street known for its independent businesses, about the authenticity and cultural appropriation inherit in a Vietnamese restaurant run by two white people from London. But I’d be lying if I didn’t say that this is one of the best meals we’ve had on Bold Street this year. And, at £65.00 for three courses for two with a gigantic bottle of Laotian lager (£6.95 for the equivalent of two bottles in one) each, it won’t dent your wallet too much either.

We know that we’ll be back, if only to get our hands on some more of those pork meatballs… 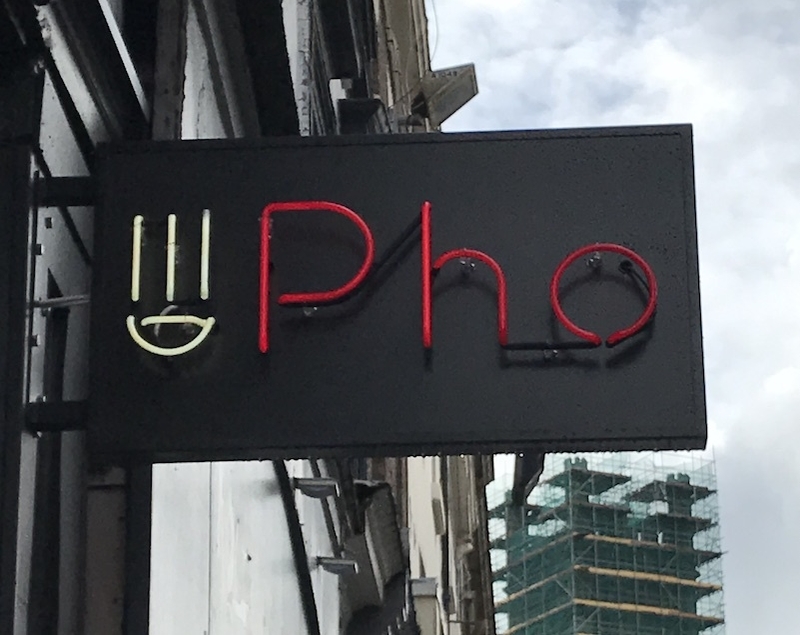